Intent on capitalising on our collective nostalgia, Sony have taken the rather large gamble of attempting to rejuvenate their incredibly dormant Men in Black franchise, something nobody was asking for or even really needed. With Men In Black 2 being critically savaged, and MIB3 hitting all kinds of sour notes, the fourth film in the “it was cool in the 90’s” series about a secret organisation tasked with protecting the Earth from the scum of the universe certainly looks the part and offers yet another visual effects bonanza amidst the star power of Thor: Ragnarok duo Chris Hemsworth and Tessa Thompson, offering up a forgettably droll and altogether tepid outing replete with witty banter and a dry ironic humour that works less often than I’d hoped. 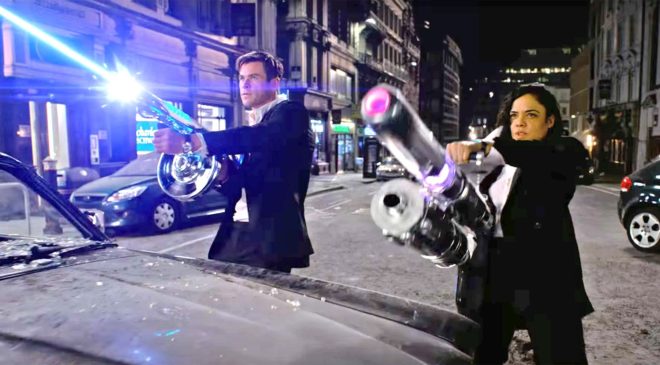 Across the globe, a super-secret organisation of people dressed in black protect the Earth from all manner of alien attack, as well as sheltering and protecting immigrants of all kinds from beyond the stars. A new recruit, or rather the incredibly willing and eager Molly Wright (Tessa Thompson) sneaks into MIB headquarters in New York and becomes a probationary Agent, Agent M, alongside incredibly handsome, popular and successful Agent H (Chris Hemsworth), working out of the UK branch in London. Tasked by chief Agent High T (Liam Neeson) with protecting an alien from imminent assassination, M and H discover that there is a mole inside their own organisation, a mole intent on destroying the world (yeah); they encounter a tiny alien warrior named Pawny (Kumail Nanjiani) and have to retrieve a powerful weapon from H’s ex girlfriend, alien arms dealer Riza (Rebecca Ferguson), while avoid confronting a pair of evil and powerful Twins (Larry and Laurent Bourgeois) to save the day. 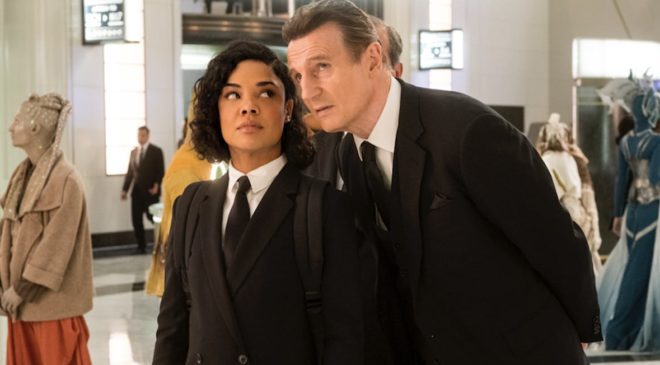 Maybe there was a chance to reboot the MIB franchise with a Will Smith-free instalment. Maybe it sounded like a good idea in the pitch meeting. Maybe the idea of re-teaming Hemsworth and Tessa Thompson, who sparred beautifully in Thor Ragnarok, was the kind of thing a studio simply couldn’t resist, like a modern Spencer Tracy and Katharine Hepburn… I don’t know, but whatever the case may be, Men In Black: International is an admirable failure. Recycled ideas and an incoherent plot, saddled with some great (and not to great) visual effects and the effortless comedy style of Hemsworth gently mocking his own screen persona (including a nice nod to the hammer wielding Thor, in one of the film’s funniest moments) cannot muster up the enthusiasm to thrill the audience or offer anything new and/or cool about this once great franchise. The idea of uber-cool agents saving the day works well enough on paper, even if the Men in Black haven’t been relevant since the original film, but somehow even the skills of director F Gary Gray (Straight Outta Compton, The Fate of The Furious) cannot elevate this film beyond a childish mediocrity. 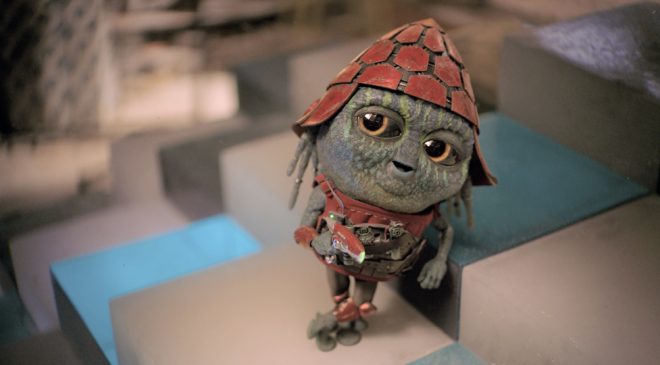 When he’s not swinging Mjölnir in the Marvel Cinematic Universe, Chris Hemsworth has carved a nice little niche for himself appearing in less successful cinematic outings that continue to bring him a solid income – the Hunstman duology has wrapped up, but I hold out hope for more films like Rush than In The Heart Of The Sea – and he’s easily one of the most charming box office draws of recent times. With both Ghostbusters and now Men in Black unsubtly trading on his good looks and effortless comedy style, Hemsworth has parlayed genetic perfection into a model of commercial success, and although he’ll hardly remember this film in years to come, Men in Black International delivers exactly the kind of freewheeling gags and effortless bumbling he’s honed on the set of at least three Thor movies and a couple of Avengers films. Whenever he’s on the screen, this film lights up and becomes vastly more interesting. The same can’t be said of poor Tessa Thompson, whose character here is not even remotely compelling or interesting despite the actress giving it her all; make no mistake, Thompson is an absolute star, and alongside Hemsworth their chemistry could be licked off the screen, but the role of Molly (or rather, M) isn’t one she’ll lie in bed thanking God for. The film trades heavily on their banter, moreso than even their MCU adventures, and despite a script that never once fetches interest from the audience their scenes together are always watchable. 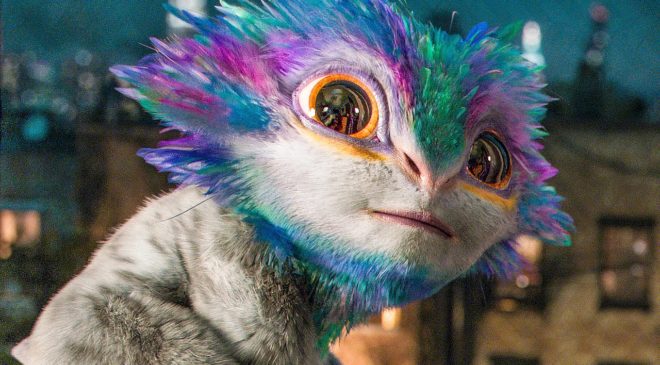 Of course, International also features a plethora of notable cameos, supporting roles and gag moments (a new fleeting glimpse of popular celebrities as “aliens” not only nods to the original film but also serves to elicit very minor chuckles from knowing fans), including a delightfully droll reprise by Emma Thompson (who appeared in MIB3) and a dashing Liam Neeson, who it must be said cuts quite the fine figure in the distinguished black suit. Kumail Nanjiani (The Big Sick) voices a sweet little all-CG character named Pawny, a three inch tall alien who “assists” M and H in their quest to retrieve the ultimate weapon, whilst Rebecca Ferguson (the Mission: Impossible franchise) looks entirely lost and ill-at-ease as a dexterously violent criminal figure who once dated H back in the day. There is some really wonky CG and green-screen to contend with in the film, a lot of it in the climactic final act, but more than a couple of sequences within the movie are quite breathtakingly beautiful (an Eiffel Tower-set sequence is nice, while a hoverbike chase through Marrakesh is genuinely well staged and exciting) and the photography – by DOP Stuart Dryburgh – is almost always stellar. 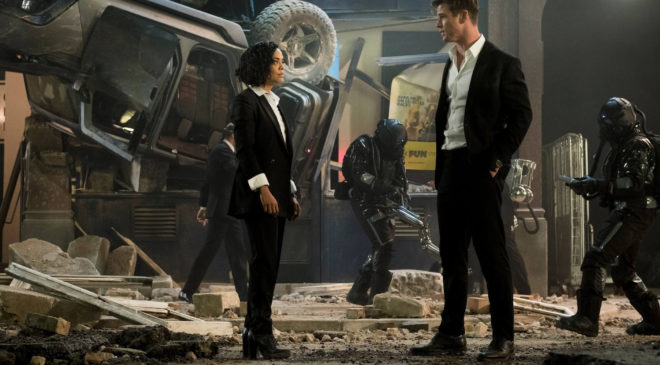 For all the money thrown at the screen, however, the cracks off-screen are evident to witness. Apparent production troubles, including director F Gary Gray wanting off the project mid-production, and producer Walter F Parkes controversially having final cut say on the finished film, have produced a film heavy on expectation but lacking in cohesion, a sense of competing desires for the project outweighed by backstreet infighting. Glimmers of Barry Sonnenfeld’s original take on the franchise, with its kooky humour and daffy design inspiration, remain present, but the gloss of cookie-cutter filmmaking and homogeneous franchise packaging remove a lot of Men In Black’s intrinsic edginess. The original screenplay apparently toned up the themes of illegal immigration, something a post-Trump world is having to deal with at this time for better or worse, but that potential subtextual dialogue has been removed utterly from the finished product, more’s the pity. Instead: it’s a popcorn candy escapade of bland characters and sequel-setting franchise bait that never gets out of second gear, despite solid leading performances handling an unbalanced and ill-focused script. If this film never existed at all, the world wouldn’t be better or worse for it. 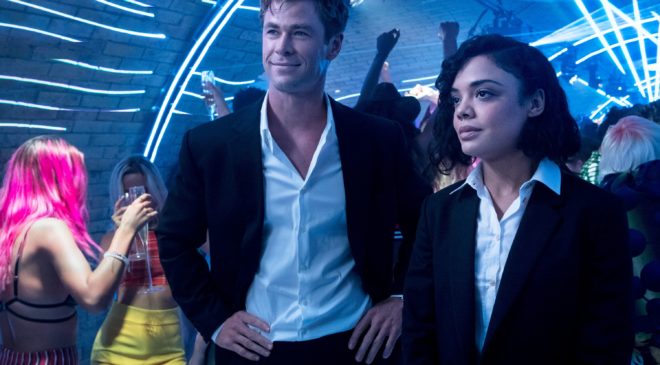 While hardly the debacle many critics have described it as, Men In Black: International is as perfectly conceptualised and executed as Hollywood committee film-making will allow. Competing ideas behind the camera have brought us a film of a quality hardly worth arguing about, yet never achieving a level of quality you’ll ever remember. There are some clever moments, sure, and the Hemsworth/Thompson dynamic is as strong and watchable as ever, but it’s an overwhelmingly forgettable entry in this year’s summer glut of blockbuster entertainment. Maybe the shadow cast by Avengers: Endgame was just too large; Men In Black: International isn’t terrible, but it equally isn’t great.