There have been countless versions of Henry Melville’s Moby Dick on both large and small screen down the years; I’m less positive there have been any on the story behind Melville’s subject matter, aside from In The Heart of The Sea. Ron Howard’s seafaring effort sees Chris Hemsworth and one-time Abraham Lincoln, Ben Walker, take on a giant whale off the coast of Nantucket. Filled with stunning visual effects (and some fairly ropey ones, I’ll grant), Howard’s opus offers some solid ocean-going thrills and a commanding Hemsworth performance, but lacks a real conviction behind a lot of what transpires – it’s a good effort, make no mistake, but tends to become bogged down in its own self-seriousness. 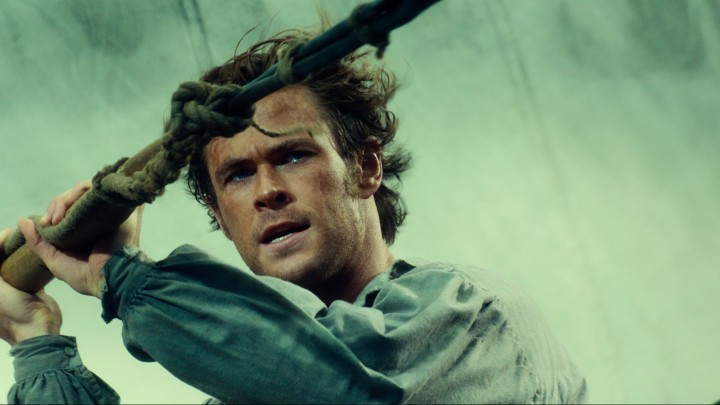 Hemsworth plays Owen Chase, First Mate aboard the Essex, a whaling ship out of Nantucket in the 1820’s. The Essex is captained by greenhorn officer George Pollard (Benjamin Walker), a man trying to live up to his famous family name. Alongside fellow crewmen, including Second Mate Matthew Joy (Cillian Murphy), and cabin boy Thomas Nickerson (Tom Holland as a young man, Brendan Gleeson in bookending narration scenes), Pollard and Chase make for the whaling waters, where the oil from the magnificent creatures is valuable as a source of energy in oil-burning cities the world over. However, as they arrive at a large hunting ground, and discover a veritable horde of whales, they encounter a dangerous foe – a magnificent while whale – that destroys the Essex and sends them into an adventure beyond their own imagination.

In The Heart Of The Sea is the film you’d get if you crossed Master & Commander with Deadliest Catch. The ol’ salty sea-dog still lives and breathes in this old-fashioned throwback to Man Vs Nature, as the best of Nantucket’s finest seamen get all squally with not only the elements, but with one hell of a nasty whale. High seas adventure is the testosterone-laden narrative follow-through to Howard’s previous film, also a collaboration with Hemsworth, Rush, only here instead of Formula 1 cars it’s sailing boats and the ocean. Based on Nathaniel Philbrick’s book of the same name, and with a screenplay credited to Charles Leavitt, Ron Howard’s muscular vision of Man V Whale is as appropriately energetic and swarthy as one might imagine; not to mention the slam-dunk olde-timey dialogue, complete with all the rhyming slang and period terminology you could imagine, which scours the barnacles from the story’s crusty Amistad-esque setting and delivers a palpating, stylish, often sombre film that puts the viewer central to the action. 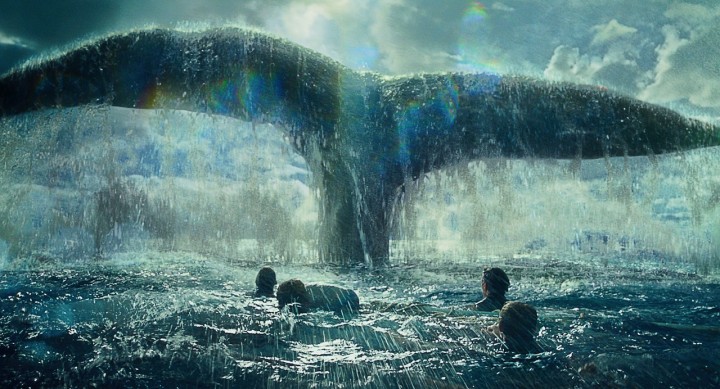 But – and this is a whale-sized “but” – the film runs aground on character and story. While there’s plenty of water-logged action and histrionic masculinity in play here, the film comes up short giving anybody a real sense of dramatic weight. Hemsworth’s Owen Chase is a fairly bland, family-man kinda character, although Howard does draw on his character flaws when the whale comes up trumps. Hemsworth gives the role his all, wavering accent and all, while Ben Walker’s Captain Pollard is resolutely staid as Howard’s direction will allow. Although they share a fair portion of the film’s gravitas and partisan antagonism, neither remains particularly memorable when shouldering the weight of the delightfully animalistic whale at the centre of this fable. Even when mirroring’s Melville’s Ahab, Hemsworth is all square-jawed chisel-looks and simplistic archetype, a somewhat Spartan portrayal of a man engendering such passion from people down the ages as to make him a literary icon.

The supporting cast are solid, if suffering from similar problems encountered by Weir’s Master & Commander; in the end, they’re all just faces in the crowd, with virtually no depth catered to the secondary roster and that annoyed me. Cillian Murphy’s prolonged cameo role as the ship’s Second Mate is valiant, as is future Spider-Man Tom Holland as Nickerson, – the film is capably introduced by Brendan Gleeson as an older Nickerson, and Bond’s Q as Melville himself – but where it would seem the film works the angles of drama, in truth it’s simply a handsomely mounted adventure film. Even the film’s second half, in which Chase and the Essex crew are left to fend off starvation in lifeboats, and the “acting” in the film kicks in, there’s still little to cling to other than simplistically drawn savagery and scheming. It’s hard to say if Howard’s direction or the screenplay share the burden of this failing, but the film’s assaultive approach to old-school whaling and its humanistic voyage of self-discovery seems less designed to be reflected upon as it is simply endured. 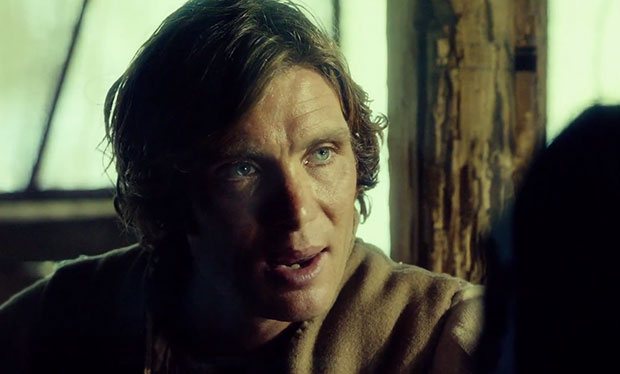 If nothing else, In The Heart of The Sea’s visual and sonic elements captivate and command respect. Ron Howard mounts his film handsomely, using real-world locations and plentiful CG work to draw the viewer directly into the world of the Olden Days Whaling fleets. The film’s colouring and cinematography is sublime, thanks to regular Danny Boyle DP Anthony Mantle, who gives the film a naturalism and semi-desaturated aesthetic which works well for the type of story Howard is trying to tell. And when the whales finally arrive en masse, it’s a glorious sight to behold. Dangerous, sure, but beautiful. Thanks to some astonishing special effects, the White Whale comes to life in a way we’ve never seen before – so lifelike, so powerful, so hypnotic, the whales swarm like fish. The euphoria of the men capturing their prey feels wrong to experience, but there’s a definite sense that for all they’ve been through, for all they’re working towards, seeing the Essex’s crew delight in success – even momentarily – assuages guilt over what they’re actually doing.

As wonderful as its marketing campaign was (and it was wonderful), In The Heart Of The Sea is a commendably solid adventure yarn that, while never quite crossing the line in terms of emotional complexity, at least delivers some tense and dynamic pulses of action. Ron Howard’s direction is broad-scale, albeit the film’s 1.85 aspect allows him to capture the entire beast within the frame, and the production design, from sets to CG, is generally top-notch. The only thing missing is a sense of soul, a reason for this film to matter, and while I offer a positive result in this film’s grading, I’m left with the issue that it could have been so much more.

4 thoughts on “Movie Review – In The Heart of The Sea”