Guns Akimbo is a film that will appeal to a very specific type of film fan, and only that type of film fan. I admit to finding Guns Akimbo a pretty revolting experience to endure, despite it having appreciably similar themes and tone to films like Crank, Arena and more recently Nerve, although the idea of people having deathmatch combat broadcast online goes back as far as the likes of Running Man. Daniel Radcliffe proves a compelling watch as he continues his lifelong quest to deconstruct his Harry Potter persona with bizarre and off-the-wall choices for work, with Guns Akimbo liming up on the Horns side of the ledger moreso than, say, straight up dramas like Escape From Pretoria. New Zealand director Jason Lei Howden stepped up to helm a film so violent and pervasively sadistic it treats its viewers most similarly to the characters within the movie, an assault on the senses that will have a limited lifespan for the majority of people sacrificing time to wade into its blood-splattered embrace. 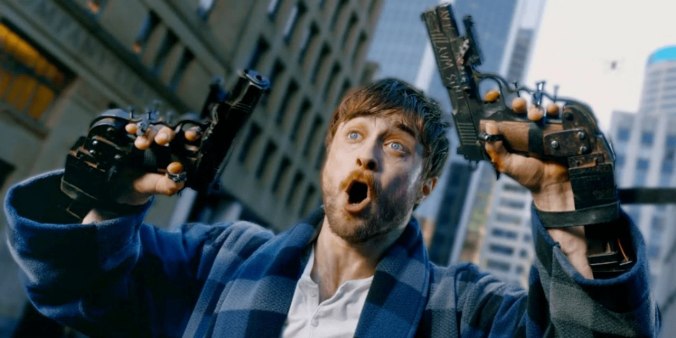 IT programmer Miles Harris (Radcliffe) spends his afterhours trolling online message boards goading those trolls into reaction. He is familiar with the underground online death match game Skizm, run by the insane and hideously tattooed Riktor (Ned Dennehy), and whose star participant, Nix (Samara Weaving) has a massive online following and a global fanbase. After rousing the interest of Riktor himself, Miles finds himself kidnapped, drugged, and suddenly handling two handguns permanently attached to his hands; the sadistic Riktor challenges him to hunt down and kill Nix, otherwise he himself will be killed. out of his depth against the far more prolific Nix, and with almost no friends to call on other than ex-girlfriend Nova (Natasha Liu Bordizzo), Miles races against the clock to escape both Nix’s bullets and the pursuing police detective, Degraves (Grant Bowler), who wants to bring Nix to justice and close down Skizm. 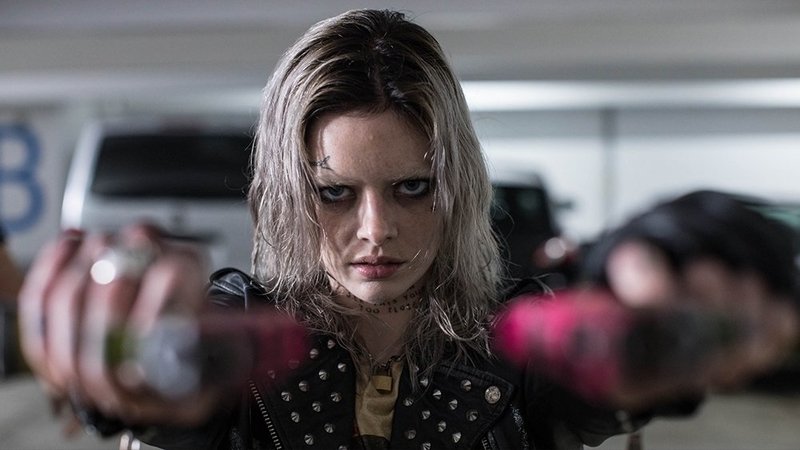 Howden tries to inject a crazy nihilistic dystopian flavour to Guns Akimbo to ambulate its nasty undertones further to the forefront. Trouble is, he shows no restraint when it counts. A mix of the Neveldene/Taylor Crank style, in which the camera whirls, loops and spins across the screen leaving vertiginous nausea to surge for soft-stomached viewers, a frankly abrasive series of increasingly silly supporting characters – mainly populating Riktor’s gang, including one credited as “Fuckface” by virtue of having a gimp mask with the word “fuck” written on it – and low-key settings, and some of the worst possible dialogue you can write, and Guns Akimbo left a decidedly sour taste in my mouth. It goes for edgy and cool and you soon learn that Howden isn’t able to generate either of those facets adequately to counter the obnoxious style he infuses his movie with. 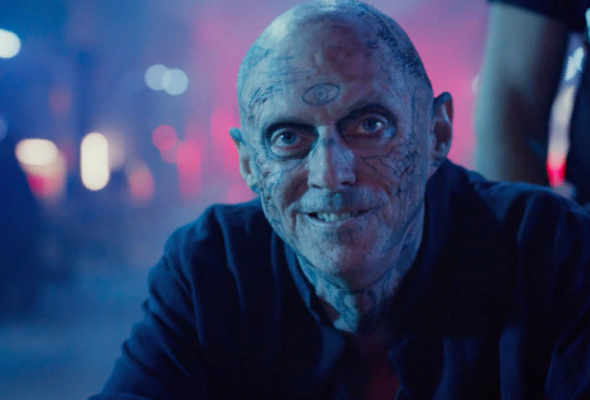 The film suffers from a deficit of subtlety, a zero sum game of decadence and depravity manifesting as a malignant opus of operatic violence that never once quietens for a pause; imagine the pace and brutality of Hardcore Henry colliding with the flickering frame-rate of Guy Ritchie’s Sherlock Holmes and a bastardisation of online gaming sensationalism. That’s Guns Akimbo, a deafening roar of polarising extremity without the subtext to warrant any feelings of intelligence. Radcliffe, as Miles, is a compelling hero of sorts, transitioning from insecure and un-heroic nerd into cavalier gun-toting anarchist by film’s end, and I think the actor is perfectly cast in the role, bring a wide-eyed innocence to bear on a character that doesn’t offer much. Co-star Samara Weaving, as the urban hunter nightmare that is Nix, introduced in a slaughter-spree that beggars belief for its physical destruction, is even less interesting despite a tragic backstory that peeks in the edges from time to time, linked to Detective Degraves (a bewilderingly underused Grant Bowler), whilst Miles’ ex, played by a skittish Natasha Liu Bordizzo, has a character so abrasive I struggled to see why she would ever date, or would allow herself to date, Miles himself. 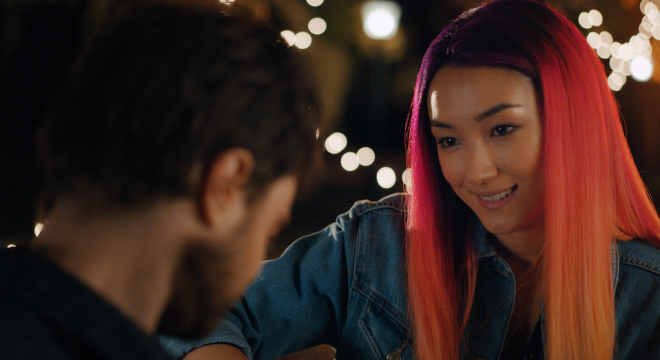 Turning things up to 11 is Ned Dennehy’s utterly psychopathic Riktor, a cross between a rejected George Miller Mad Max first draft character and the Dennis Hopper role from Waterworld. Bizarre, off-the-wall and utter nonsense, there’s a delight in the way Dennehy plays the part but honestly it’s a large ripple in a big pond of competing white noise. The film’s just too obnoxious to allow even this particularly memorable character to shine. A minor cameo to a hilarious Rhys Darby, as a homeless man Miles meets mid-film, offers the movie’s biggest guffaws but not even this bright spot can reverse the negative trajectory Guns Akimbo seems set on. A selection of shadowy, jittery tertiary character populate this astoundingly overpaced film, and were Howden to tug on the reins a bit to let things cook properly, there might be some decent ironic humour and delicious design work to give the audience something vaguely human to cling to, but no. The film barrels along without a care, throwing handfuls of semi-developed and entirely indistinguishable background characters at the screen before moving on so fast you barely have time to blink. 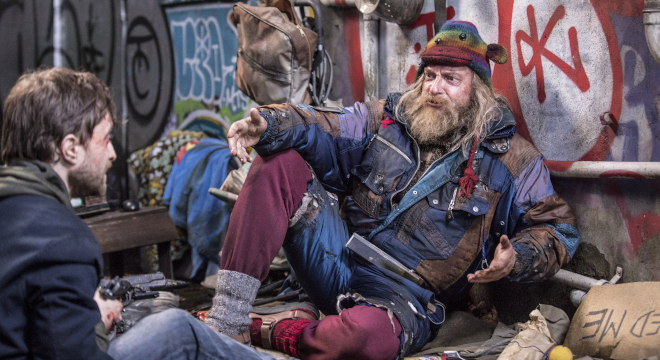