If you look purely at the talent involved in The Wraith, without seeing the film, there’s a significant pedigree working here that ought to have produced movie magic. The likes of Hollywood superstar Charlie Sheen (well before the HIV and tiger blood meltdown), industry darling Sherilyn Fenn, the son of an iconic industry director in Nick Cassavetes, not to mention Randy Quaid and a minor role to Griffin O’Neal, son of Ryan O’Neal, and you have the makings of an absolute classic action adventure film. Sadly, The Wraith isn’t that, but it is a pretty decent B-movie boasting some sweet car racing, a cool premise, and plenty of gratuitous nudity. The Wraith ain’t cinema, but it is a pure 1980’s delight. 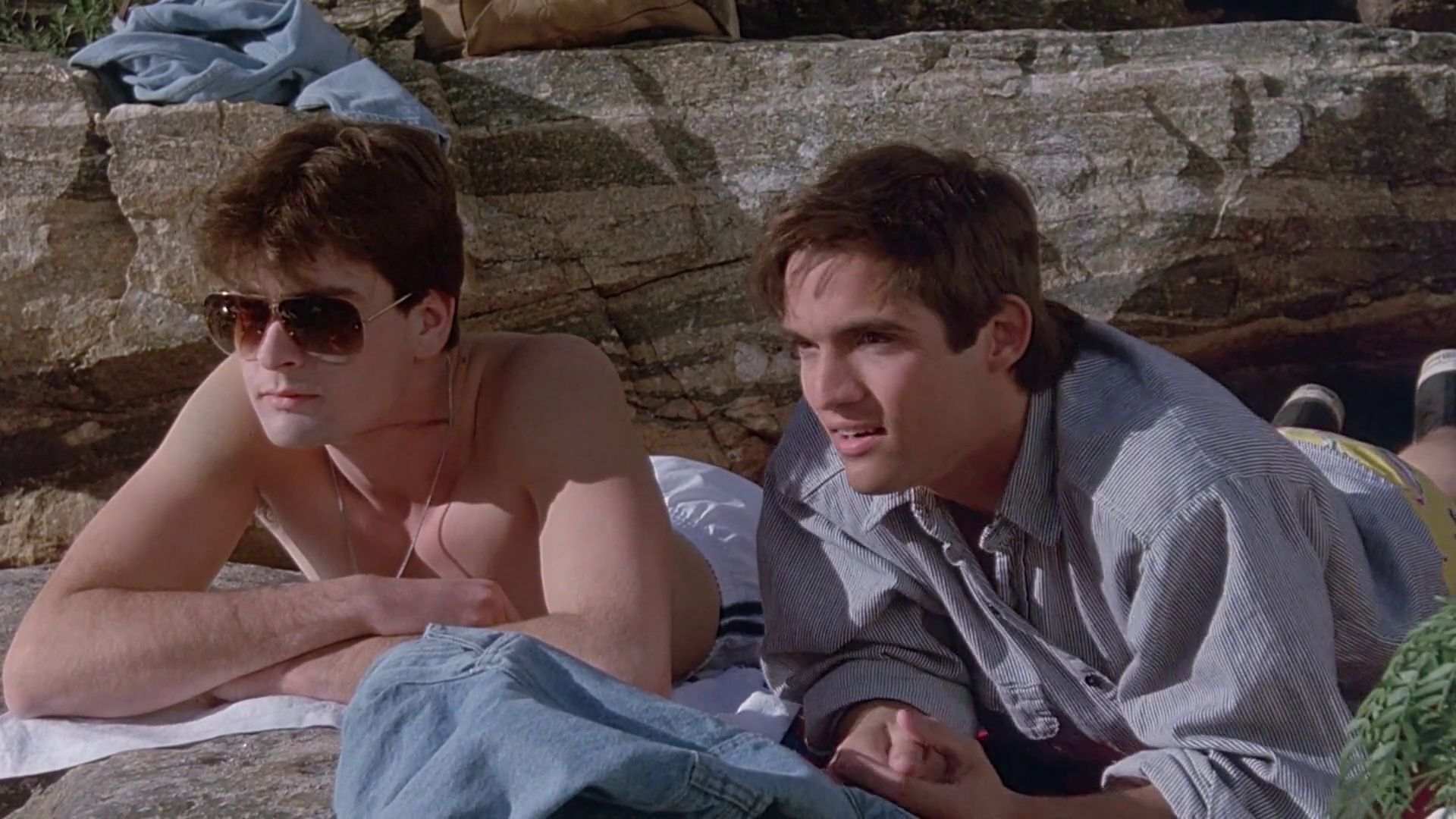 The town of Brooks, Arizona, has a problem with a local gang of car racing pirates, led by local hoodlum Packard Walsh (Cassavetes – Face/Off), who challenges innocent locals to road racing and then taking their vehicles when they lose. Walsh rules Brooks with a swagger that’s pure macho arrogance, with everyone, including his burger-waitress girlfriend Keri (Fenn – Boxing Helena, Two Moon Junction) and the local sheriff, Loomis (Randy Quaid – Independence Day) resenting his presence in the town. The murder of Keri’s former lover, young Jamie Williams (Christopher Braley in a cameo) years earlier also plays upon the mind of Jamie’s surviving brother, Billy (Matthew Barry), who spends his time flipping burgers at the local hangout. So when the hot young newcomer, Jake Kesey (Sheen – Terminal Velocity, Hot Shots!, 9/11) arrives to woo Keri, at the same time as a mysterious black figure driving an indestructible supercar, it would seem Packard’s carefully established dominance is about to come to an end. 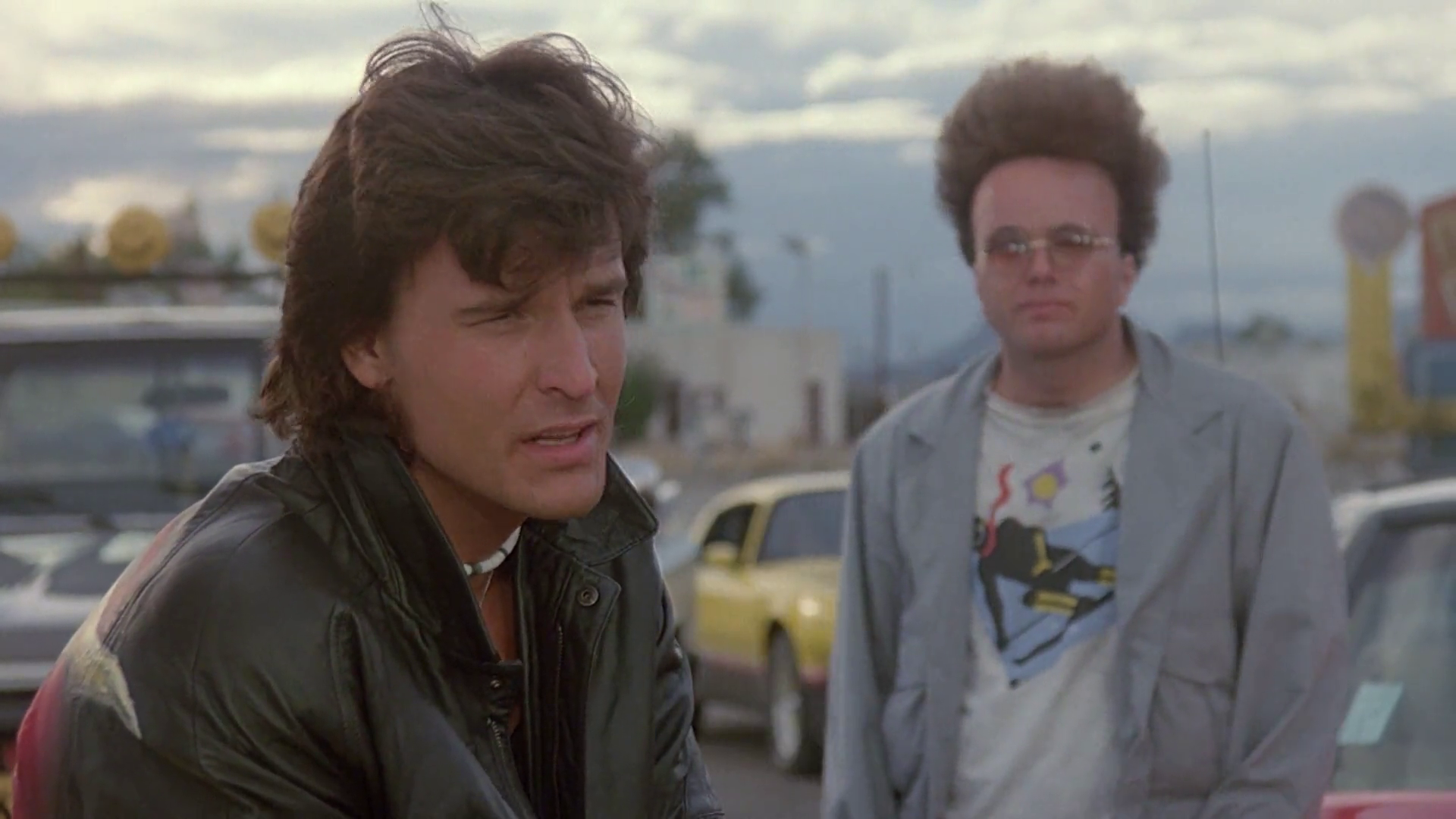 The Wraith screams 1980’s cinema. It’s a throwback to a simpler time, when action and nudity didn’t require a reason, it just existed. The screenplay doesn’t ascribe to any kind of realism or nuance, throwing up 1-dimensional characters and a confused, often opaque subtext to what’s going on that belies the loud, frantic action sequences. The film trades off the then-popular supercar themed concepts like Knight Rider and Black Moon Rising, featuring a custom designed Dodge Turbo Interceptor used in some dynamic of-the-period race sequences and several explosive showdowns with various characters in the film. Sheen and Fenn aside, almost everyone else in the film is an 80’s cliche, from the big-haired tech-dude (Clint Howard), the drug-addled “comedy due” (David Sherrill and Jamie Bozian’s tattooed and punk-rock morons), the greasers (Chris Nash and Griffin O’Neal’s background roles), and Randy Quaid’s no-nonsense Sheriff Loomis, a man restrained only by the law and little else. 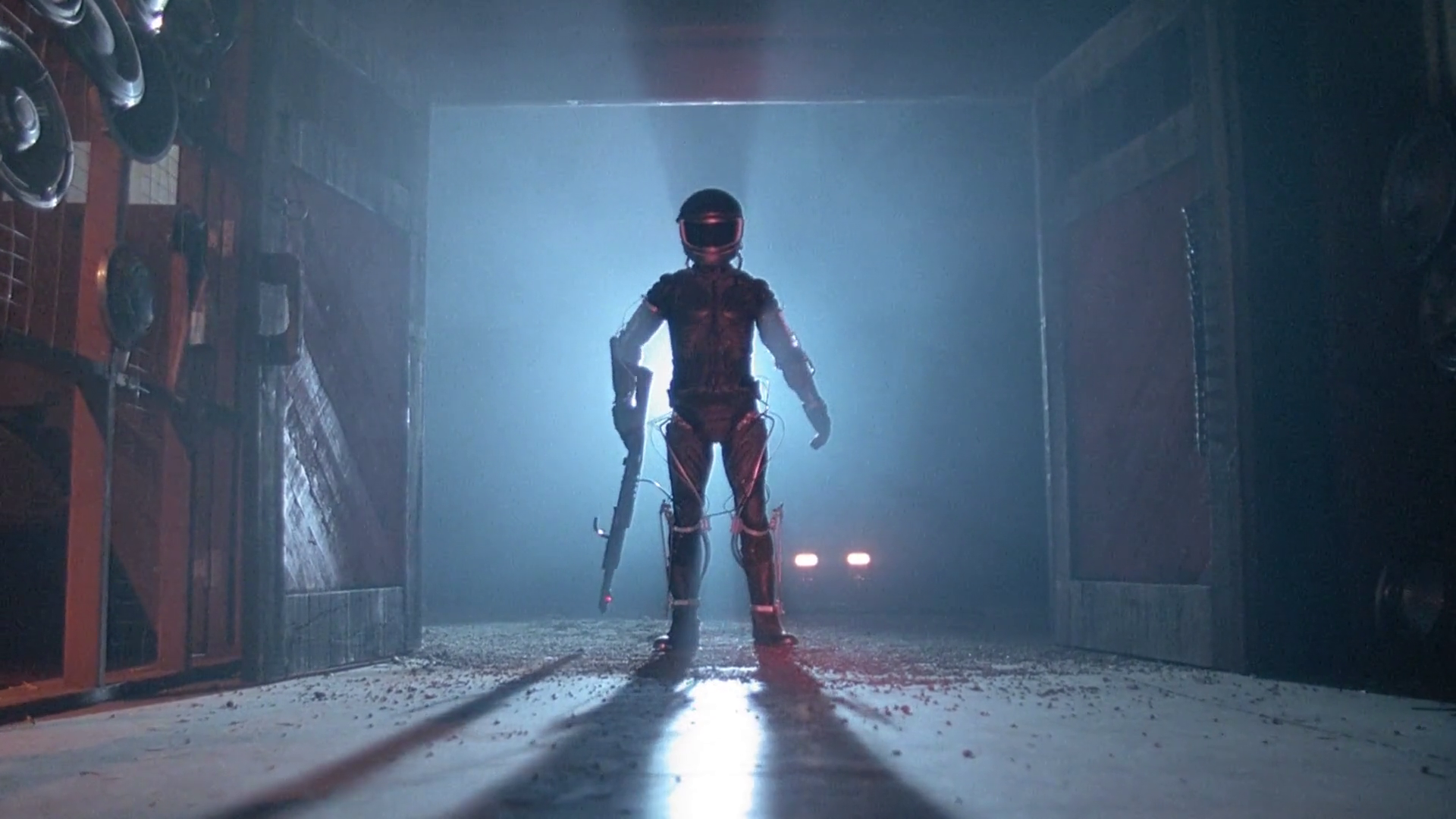 In what might seem a strange filmmaking choice, the film spends far more time circling the bad guys than it does Sheen or Fenn, which is weird. Cassavetes’ Packard Shaw has most of the film’s focus, whilst his gang members sprinkle throughout doing sidebar quests and adding width to a fairly narrow premise; Sheen, together with a luminous and sexy Fenn, spend a fair portion of their time together locked in various degrees of flirtation and sexual gratification, with Sheen offering little other than a smoulder into the middle distance (and trust me, that’s enough). Fenn, who spent a fair bit of the 1980’s and early 90’s appearing in roles where she gets her boobs out at various times, is adequate with the limited material, and her chemistry with Sheen is the film’s strongest element. Randy Quaid’s abrasive cop role allows him to chew the scenery and provide exposition when required, and his continued butting of heads with Cassavetes’ Shaw is another highlight in a film filled with very few. Cassavetes plays one of the worst possible character you’ll see on-screen, not for how bad he is but for how terribly he’s written. Shaw is the archetypal 80’s jock, full of himself, cruel and vindictive, jealous to a fault and a guy who considers his girlfriend his “property”, which rankles moreso today than it probably even did back in the 80’s. It’s a shorthand way of the audience understanding that he’s a pure, unadulterated asshole – and a killer to boot – so his comeuppance, when it comes, needs to satisfy (it doesn’t, but hey). 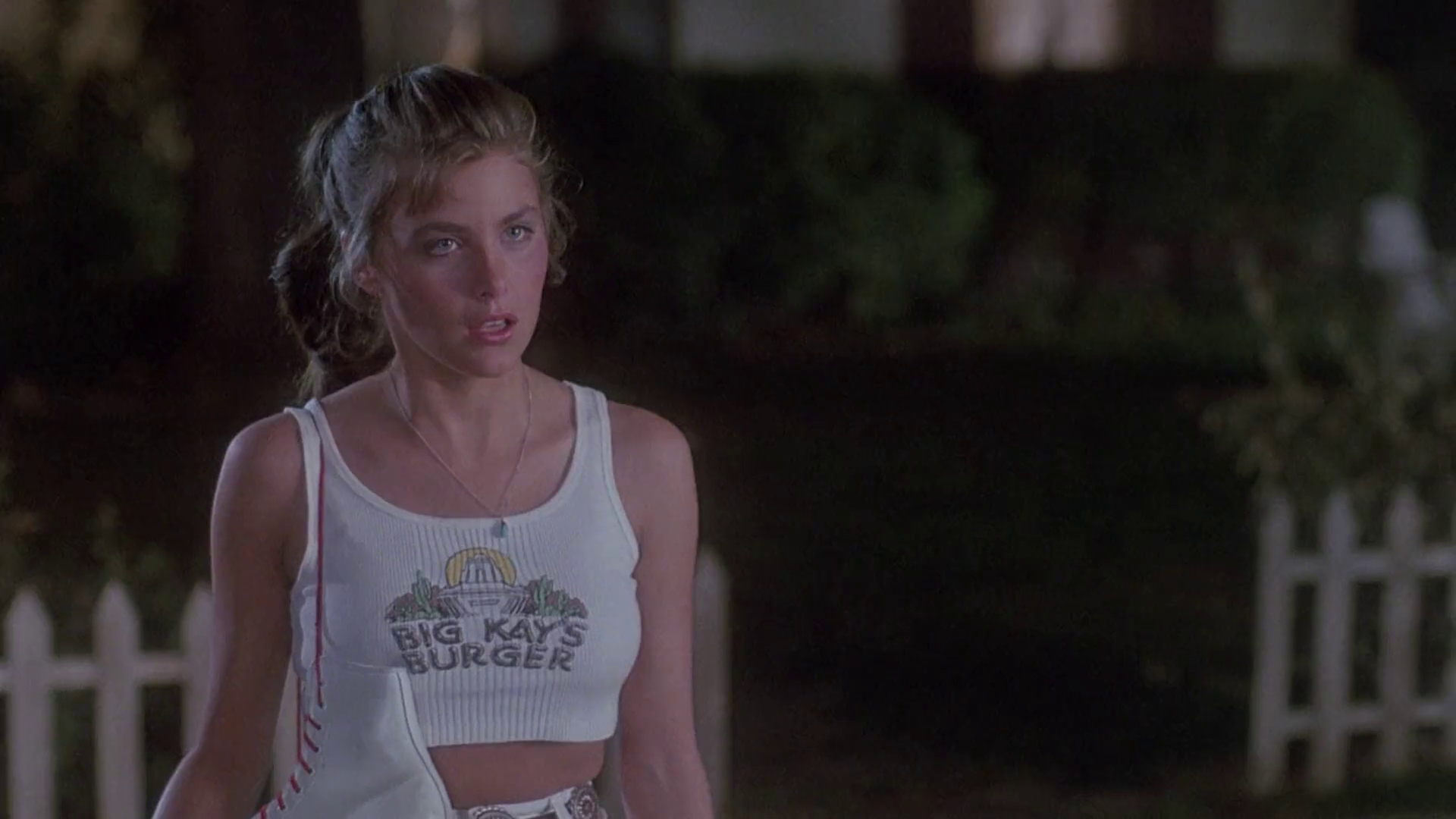 The film’s central plot twist involved the supernatural vehicle and its equally mysterious driver, who challenge members of the gang to races before killing them in “accidents”; it turns out that Sheen’s character is a reincarnated version of the dead Jamie Hankins, who is Keri’s soul mate across the universe, although how he returns from the dead (with a completely different face, as well as access to a very expensive supercar that can’t be destroyed) are questions never answered by the screenplay. The Wraith is a simple revenge thriller of sorts, although the revenge element isn’t clear until the very end and the thriller aspects aren’t actually that thrilling. Instead, audiences of today will look upon this low-budget subgenre entry with disdain: the film’s dialogue is hideously written, leaving this typically capable cast floundering with execrable dialogue and a propensity for bland, dramatically inept direction. 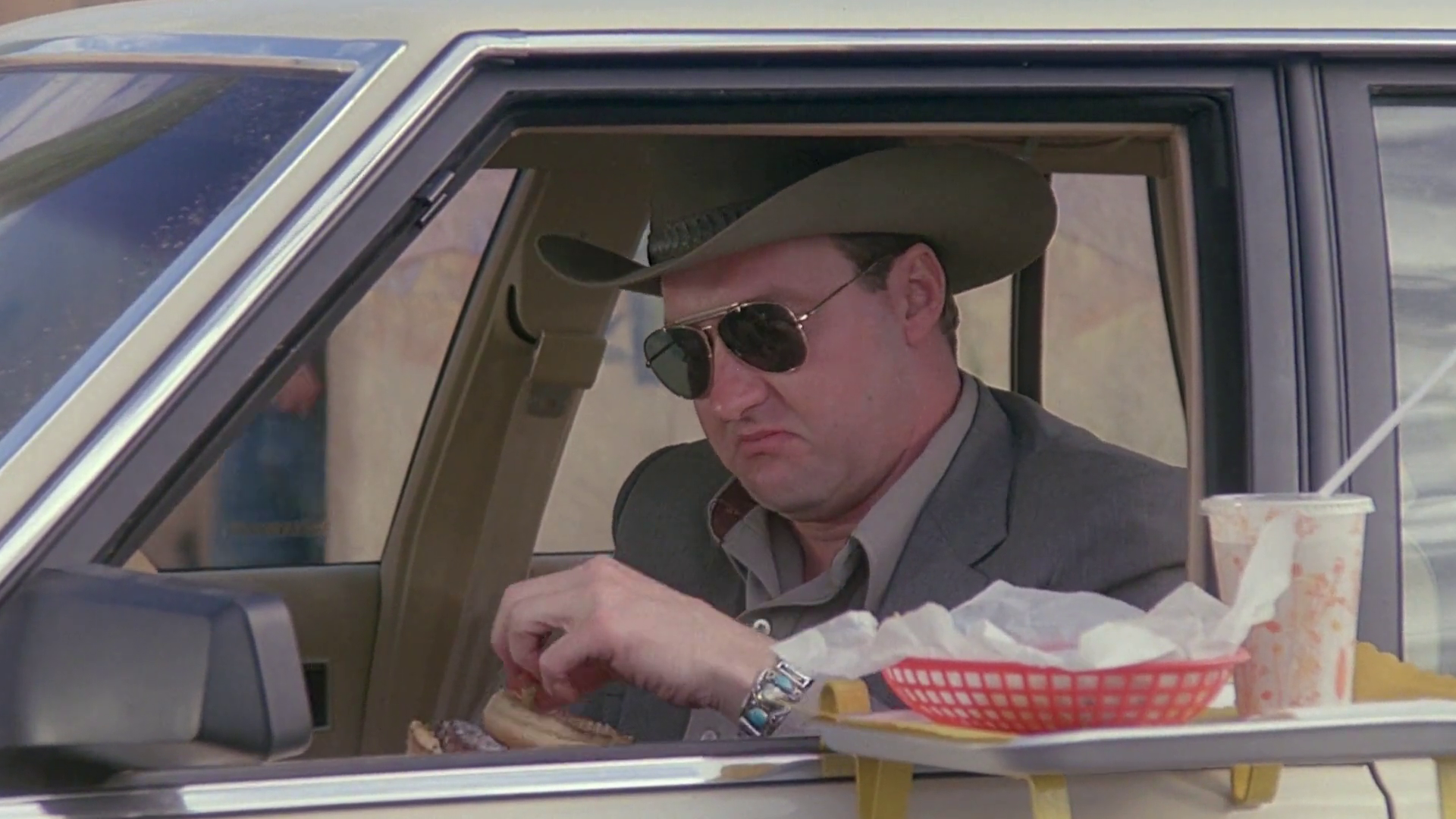 The film sells itself on violence, and it has a fair bit of that, even if it feels restricted by 80’s censorship standards. Having not seen the film in nearly two decades I’d not realised how child-unfriendly the film turns out to be: there are tits, blood, death and carnage that had obviously been chopped out of the free-to-air television broadcast I ate up back in the late 80’s – I wore out the VHS tape I recorded this film on because I thought the car was so cool. Fenn gets her cans out, the Wraith slices through the film with explosions, gunfire and wanton destruction on his quest for revenge, and the film’s overarching supernatural tones felt a little more precise than I remember. It’s all filtered through that glib 1980’s aesthetic, though, so modern audiences will probably find it quite tame by comparison to today’s material. 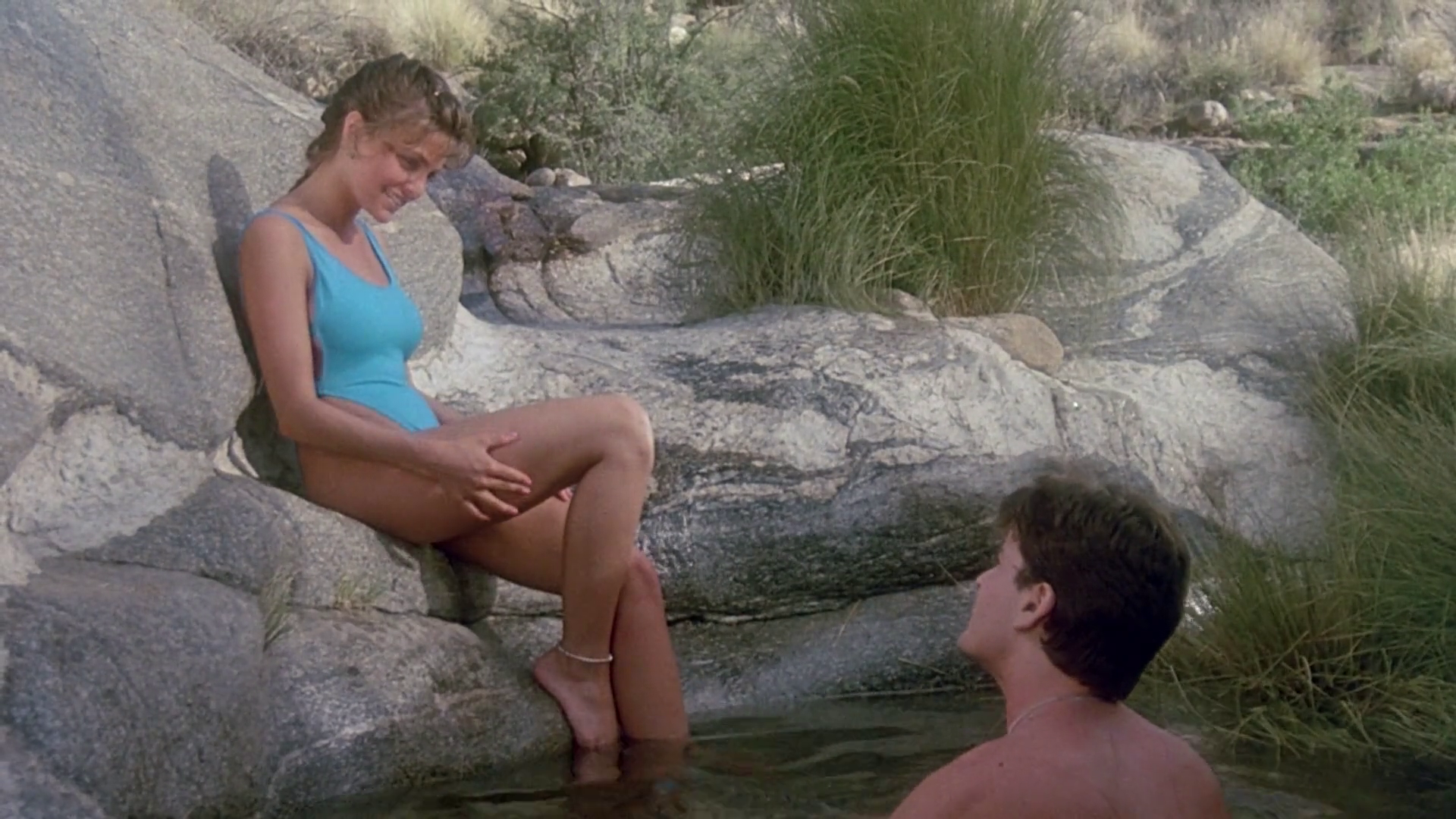 I have to admit to a feeling of nostalgic glee approaching The Wraith after all this time. The nostalgia hit a home run for me, despite the gaping flaws and terrible writing the film contains, and I found myself grinning wildly as Sheen, Fenn and Cassavetes embarked upon this utter tripe. Does it hold up? Not a bit, and the misogyny, sexism and dreadful cliches contained within will cause some to flinch a little. Me? I found it a delight for its campy awfulness, a so-bad-it’s-good blast of past glory for Sheen and the sci-fi genre overall. A cool car, a cooler anti-hero, a sexy as hell Sherilyn Fenn, and you have a recipe for a first class cult classic that sits proudly inside the era in which it was made.