It’s a cliche that Waterworld remains a Hollywood metonym for a film’s commercial failure. A renowned box-office turkey, Waterworld’s ballooning budget and severe production woes, as well as a fracture behind the scenes between star Kevin Costner and director Kevin Reynolds, offer a remarkable glimpse into the big budget folly the industry often grapples with. For its time the most expensive film ever made, Waterworld’s biggest splash (ha) was just how little money it made back: audiences, for whatever reason, just didn’t go and see it (myself included). It should be noted that the film itself isn’t bad, comparative to other notable box-office duds in terms of pure story and character, and featured Costner at the absolute height of his powers (his five previous years had yielded Dances With Wolves, Robin Hood: Prince Of Thieves, and The Bodyguard, among others) so you couldn’t hand the film’s failure at his feet. With a new fan-cut release of the film on offer, dubbed the “Ulysses Cut” and reincorporating some 40 minutes of footage back into the narrative, a re-evaluation of Costner’s first major box office flop is long overdue in determining exactly where it sits quality-wise in the actor’s lengthy filmography. 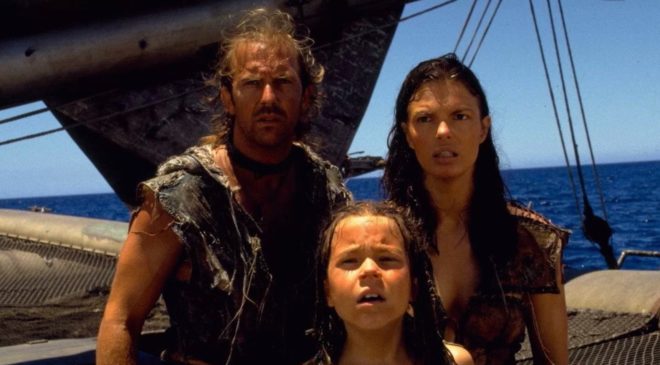 Earth, the distant future, and the polar icecaps have melted leading to the globe now being entirely covered with water. The remaining humans now live on isolated man-made floating atolls, tiny microcosms of life representing a cross-section of historical interbreeding and the deterioration of all knowledge. It is to one larger atoll that a mutant human, the Mariner (Kevin Costner) arrives to trade discovered treasures (historical artefacts, and the extremely valuable commodity known as dirt) for clean drinking water. While there, the atoll is attacked by “Smokers”, a group of pirates led by The Deacon (Dennis Hopper) who are searching for a young girl, Enloa (Tina Majorino), upon whose back is a tattoo that reputedly will lead people to the mythical place known as “Dry Land”. Enola’s adoptive mother, Helen (Jeanne Tripplehorn) rescues the Mariner from imminent execution for being a mutant (he has developed gills and can breathe underwater), and both of them take Enola out onto the open water to escape the Smoker’s raids. However, The Deacon persists in his pursuit, and eventually the Mariner, while holding a grudging resentment of the two females aboard his vessel, must take the fight to the pirates once and for all. 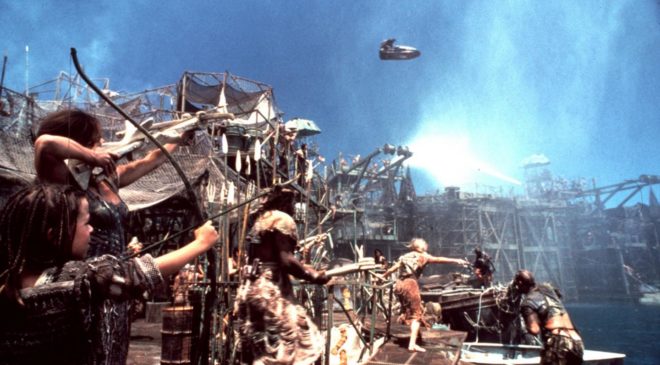 I mentioned cliche at the top, and I reiterate yet another cliche with regards to Waterworld: the film’s expensive production spend is entirely up on the screen. The film looks expensive: from the massive cast, the incredibly over-the-top real-life floating mini-city constructed for the film, to the oil-tanker climax in which Costner’s post-modern anti-hero takes it up to the rag-tag bunch of inept pirates scourging the seaways, you can see where Universal spent their money. Today, a movie like Waterworld would almost entirely be filmed in a swimming pool with a green screen and lots of CG, but Kevin Reynolds, Costner and the other producers went all out to give the film’s massive scope and scale as much detail and realism as they physically could. The Mariner’s boat, a trimaran packed to the gills (pun intended) with artefacts from a world now lost and tricksy weaponry with which to defend it all, is a highlight to the film’s vaguely Mad Max feel (the trimaran appropriates Mel Gibson’s iconic Interceptor vehicle a touch), while the gi-normous floating pontoons of the ramshackle atoll, built for-real off the Hawaiian coast, is absolutely breathtaking for its details and intricacies. Little wonder the production budget exploded when a typhoon wrecked the set mid-shoot and it had to be re-constructed. It’s a “no expense spared” film, this one, and the technical skill used to pull off many of the shots and sequences involved are to this day absolutely astonishing. 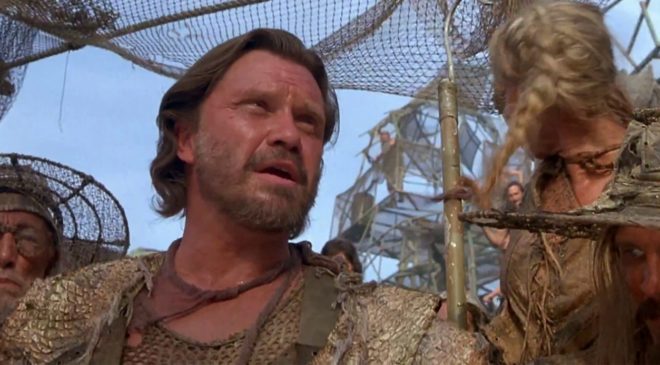 In terms of spectacle, Waterworld ticks all the boxes. There’s massive explosions, plenty of random killing, a smattering of post-apocalyptic genre archetype characters (the crazy ones, the goofy ones, the zany ones, the religious ones, the idiot ones), and Dennis Hopper chewing as much of the expensive scenery as only he can. I think where Waterworld doesn’t work so well is the contradiction in tone between Hopper’s teeth-gnashing, campy bad guy and Costner’s restrained, silent-but-deadly Mariner, both of whom appear to be acting in two different films. Hopper, as Deacon, plays with broad-brushed antagonism and a kooky mix of veneration and insanity, his skittish dialogue and wild-eyed performance leaning far too heavily into parody or pastiche to fit neatly into the rest of the film’s more nuanced textures. Costner’s Mariner, a brooding isolationist, is a tough nut to crack in terms of finding his inner heroism; he’s the “hero” of this story not because of any innate sense of loyalty but rather a murky sense of survival and reciprocity, which I admit isn’t handled too well by the screenplay. Pitch Black director David Twohy had a hand in the script with Peter Rader, and in crafting the mysterious, almost always angry heroic figurehead for the film that gave Costner a character that the actor feels unsuited to personify, try as he might. To a fault, Costner’s limited range in a genre flick like this shows up more often than I’d have liked. Oh, he tries, sure, and the film’s gargantuan backdrops and epic scope aide the audience’s appreciation for what transpires, but Costner’s character falls back into cliches and tropes of the apocalyptic genre so much you half wonder if they didn’t just lift this directly from a hundred other films. 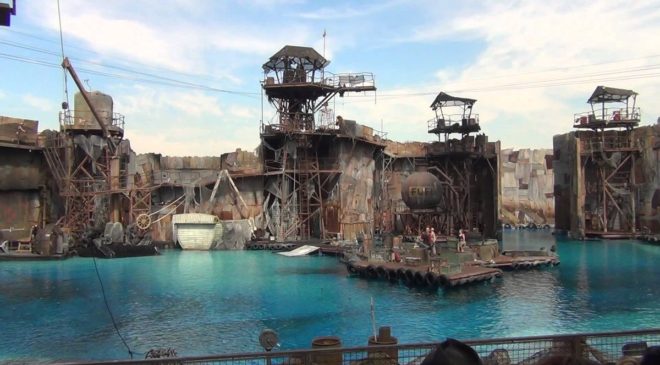 Jeanne Tripplehorn, off the back of the success of her co-star role in Basic Instinct, does a solid job as the unremarkable Helen, adoptive mother to Tina Majorino’s blue-eyed ingenue Enola (so named for the Enola Gay, I’d wager), with her character’s arc hinging entirely with the context of what she has to do with the Mariner. It’s not a great role – she has to look alternatively nonplussed, confused, frightened, and occasionally strong-willed as the film unspools, and while the actress accomplishes all that’s set before her there’s again a tonal shift in portions of the film that don’t feel as fully developed as one would like. Majorino has her work cut out acting alongside such Hollywood titans, and to her credit actually outshines Dennis Hopper in their brief scenes together, but too often is used as a focus of mystery and/or comedic idiosyncrasy, more’s the pity. The vast ensemble cast is easily the film’s chief success, with the likes of Gerard Murphy (as Deacon’s recalcitrant right-hand-man, Nord), Michael Jeter (as the resident scientist and eventual navigator of a hot-air balloon), RD Call (as the atoll’s enforcer), and even a before-he-was-famous Jack Black appearing in supporting roles: the costuming and set design is superb, so much that even the multitude of familiar faces are occasionally swamped beneath the massive production values. A small hat-tip too to William Preston, for having only two brief scenes but still managing to utterly steal the entire film – and earn its biggest laugh. 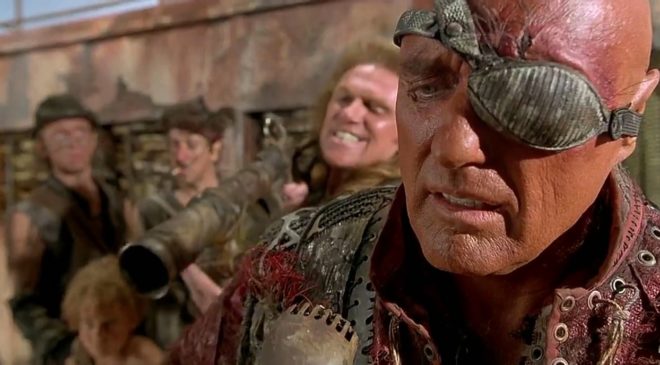 With a hero rooted in too-serious introspection and an all-too prescient end-of-the-world scenario, and a villain trying his hardest to out-comedy the very idiocy of the premise inherent in the movie, Waterworld struggles too much with differning tone, alternating between fatalism and pragmatic nihilism to its detriment. The film brought to an end the relationship between Costner and director Kevin Reynolds (until they mended fences and re-teamed for the television mini-series Hatfields & McCoys in 2012), apparently due to Costner’s constant “back seat driving” as one of the film’s producers, but the overall product up on the screen is more than serviceable action-fantasy fare that works despite all that threatens to wreck it. James Newton Howard’s indelible theme soars across the waves and remains a favourite of mine, Dean Semler’s sumptuous cinematography looks amazing (revisit this film in HD, you’ll be pleasantly surprised despite some occasionally shocking chroma-key elements late in the movie) and Peter Boyle’s editing is fascinating to examine. 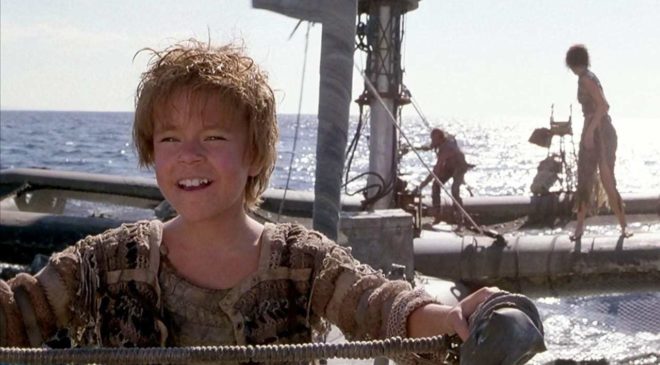 Waterworld’s Ulysses Cut – clocking it at around 180 minutes – is a bloated, bothersome mess here and there, and it’s easy to spot the reinserted scenes for their fatuousness with regards to the film’s pace and tone, but by widening the canvas on which to paint Reynolds’ vision the extended version allows fans to really delve into the more grounded elements of the story. If nothing else, it only really exacerbates the tonal imbalance between the Hero and the Villain and their respective journeys within the narrative. It should be noted that the Ulysses Cut does re-use at least three shots in close proximity to each other that I spotted, so the film isn’t without some technical flaw, but it’s a minor nitpick. While Waterworld will never be considered a genre masterpiece, the revised edition is certainly worth checking out for some manageable chuckles, some nice action sequences and a showmanship modern Hollywood appears to have abandoned entirely.