William Eubank’s decidedly derivative creature-feature ought to be grateful. After all, when you plagiarise truly great (and not-so-great) screen classics to make your frightening modern horror film you should probably give credit to those other filmmakers. Underwater outright steals elements from the likes of Ridley Scott’s Alien, James Cameron’s The Abyss, Stephen Sommers’ Deep Rising, David Twohy’s Pitch Black, a little bit of REC and a sprinkle of Matt Reeves’ Cloverfield. That it does so with such visual acumen and a fingernail-shredding sense of terror is more testament to the power of established genre tropes than anything unique Eubank does with his film, but as a superficial thrill ride that offers a solid performance by Kristen Stewart and some truly mind-blowing tension Underwater is well worth the dip. 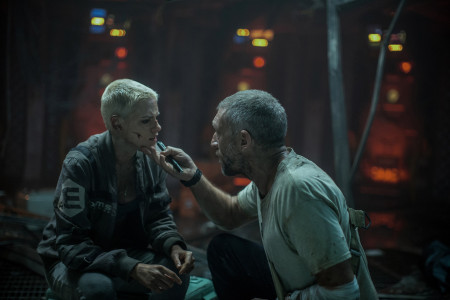 Stewart plays Norah Price, a mechanical engineer aboard an enormous deep-sea drilling rig at the bottom of the Mariana Trench, the deepest point on Earth. When catastrophe strikes, and the rig is partiually destroyed, Norah, together with Captain Lucien (Vincent Cassel – Eastern Promises, Jason Bourne), biologist Emily Haversham (Jessica Henwick – Game Of Thrones, Star Wars: The Force Awakens), engineer Liam Smith (John Gallagher Jr – 10 Cloverfield Lane), dayshift worker Rodrigo (Mamoudou Athie – Unicorn Store, The Front Runner) and resident jokester Paul Abel (TJ Miller – Deadpool, Cloverfield), must find their way through the collapsing vessel, across the ocean floor and to relative safety of a nearby abandoned secondary rig, from which they may mount an escape. Trouble is, they aren’t alone on the ocean floor, and soon determine that something else, inhuman, is hunting them in the oppressive darkness. 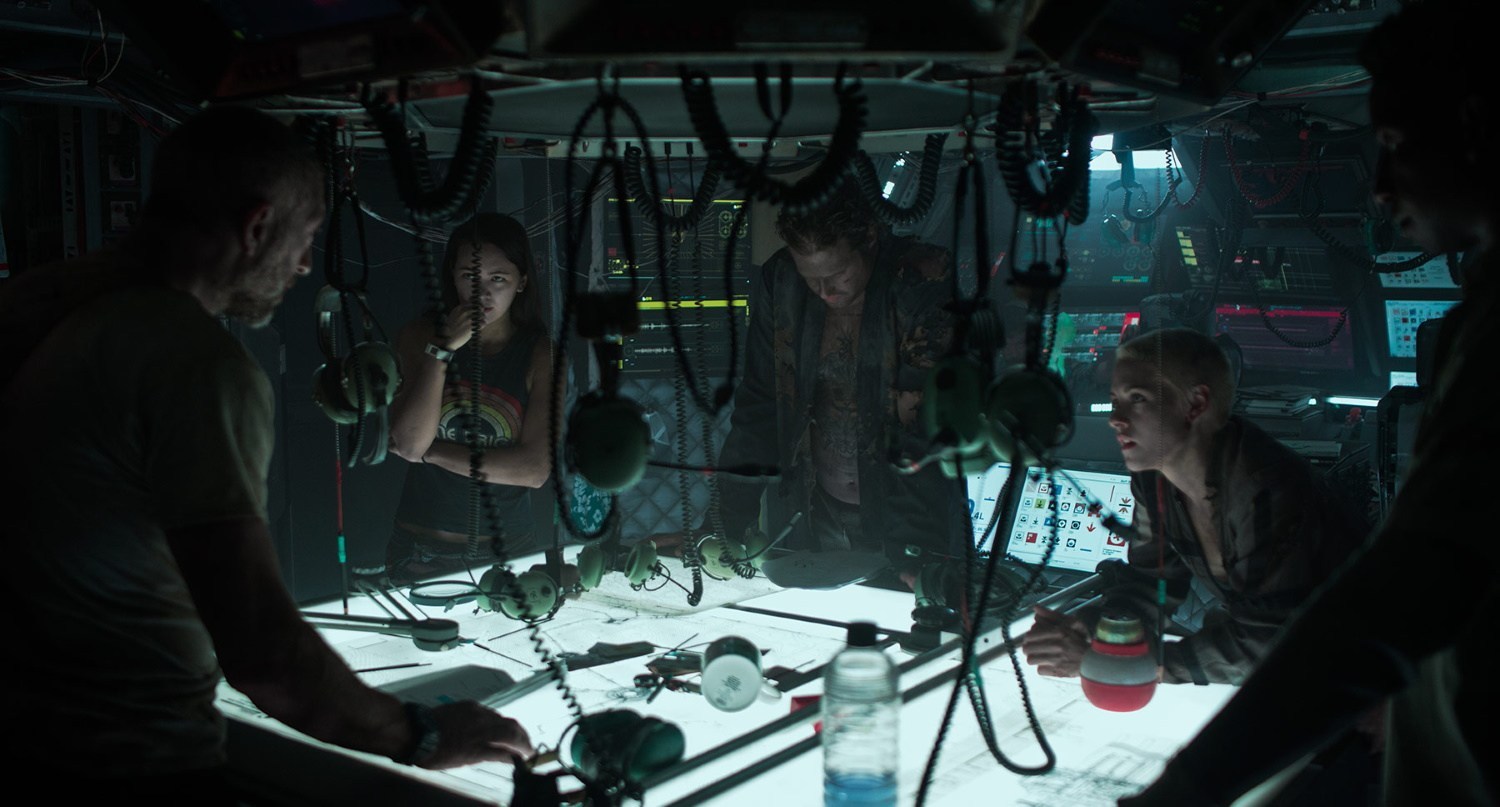 Yes, you could call Underwater derivative, yes you could call it a rip-off, but then Hollywood has always been utterly shameless about repackaging old stories, spiffing them up and presenting them as a new thing. Despite this, William Eubank’s (The Signal) film is a thorough treat for horror hounds through its visceral premise, terrifying visuals and an exquisite sound design that truly puts you on the bottom of the ocean. The vast majority of us have a healthy regard – read, fear – for confined spaces, particularly those kinds of spaces where you crawl through that rapidly become tighter and tighter before you suddenly find that you can’t go backwards and the only way out is to push on or die, and Underwater plays upon that fear both literally and figuratively. 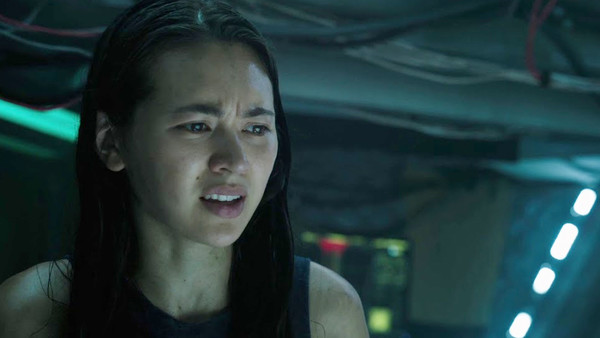 Through its conventional plotting and fairly generic character tropes, Eubank wrings out the tension through a series of escalating pressure-cooker scenarios designed to gradually confine his ensemble in increasingly smaller locations until he has them trawling the ocean floor in diving suits that look suspiciously like Halo character avatars. The initially terrifying sounds of some pursuing creature behind them serve to amp up the fear in the audience, the fear of the unknown, before the film takes on a fairly distinct B-movie mentality by revealing the creature a little too early as it parlays limited space (ha!) for character development into something of a ludicrous chase across the inky darkness of the ocean floor. There are touches of psychological terror too, with Stewart’s Norah Price, the obvious heroine of the piece, forced to confront base fears of smothering and death the further the film progresses. The lure of safety is a slender one in Underwater, the odds never once being in their favour, and the unending frantic drive to reach the confines of the hitherto undamaged second drill rig becomes a true beacon of hope – as you’d expect, hope that is snuffed out for the majority of our disparate ensemble.

Sadly, for a film that kicks off with such ferocity and such technical tenacity, Underwater comes undone the closer it gets to its Cloverfield-esque conclusion. Silly internal character choices, a disregard for actual plausibility – yes, even in the face of the implausible – renders our suspension of disbelief adrift in the eddies of the film’s derivative machinations, rooting the earlier believably intelligent story points and tossing them aside for discombobulating shock-and-awe tactics that wear out their welcome quite quickly. It’s still enjoyable, sure, and Underwater’s occasionally terrifying set-pieces will engender a suffocating urge to hold our breath for extended periods, but the way the film moves from plausibly futuristic to Godzilla-esque sci-fi isn’t earned enough to make the last act twist work. I reference Godzilla because I need to – Underwater’s climactic antics trip from clammy Aliens-esque terror into an absurd, leviathan-level absurdity that just feels unequal to the previous hour and a bit of running time. It borrows from Pitch Black and Deep Rising considerably without doing the ground work to earn the payoff.

At least we have the translucent performance of Kristen Stewart to guide us. Stewart does her best Ellen Ripley impression (most objectively the part in Alien where she’s dressed as skimpily as possible) as Norah, an unwilling participant in this game of life and death who feels despondently unequal to the task but who eventually proves herself able to echo the screen legend herself, setting off a self destruct sequence towards the end of the movie (in the most improbably simple fashion). I admire Stewart for stepping back into the kind of generic, tentpole cinema she has generally avoided since her Twilight days, and the actress gives a committed performance to elevate her role to something stronger than the script appears to have called for. Co-stars Vincent Cassel and Jessica Henwick are serviceable, whilst TJ miller, as the film’s comic relief, provides his typical sarcastic wit at all the appropriate places. Limited roles to John Gallagher Jr and Mamoudou Athie round out a small but accessible roster of characters, all with genre traits that make it easy for us to invest in, if not outright enjoy. But the film rests squarely on the luminous Stewart and to her credit she delivers: Miller’s character describes her as a “flat-chested elfin beauty” and I was surprised the descriptor made it to the screen given Stewart’s status as a star, but she allows herself to truly inhabit the relatively limited role of Norah and gives her a working-class stiffness and proud, never-say-die attitude that serves us well throughout. 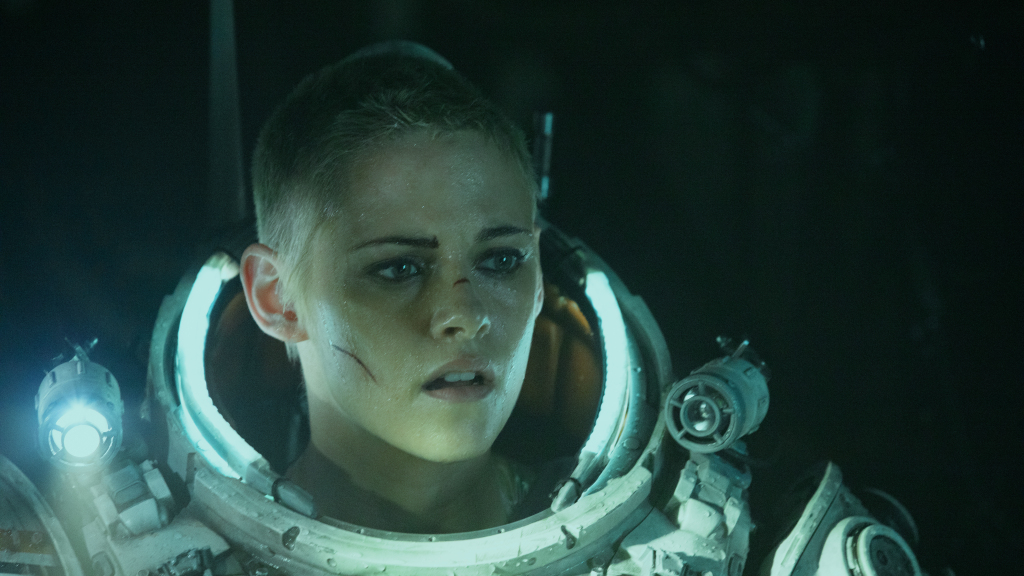 Underwater is a film of Frankenstein-level quality. Parts of it are good, bordering on great. Parts of it are laughably silly, preposterous even, and for the most part the stupidity curves up the closer to the end credits you get. Parts of it are inspired (by other films, cough cough) and Eubank certainly has a specific visual style he brings to bear on proceedings, despite the nature of the plot. Visually there’s a lot to admire here, and in its B-level way the film achieves its full potential with ease, through terrifying sound design, excellent cinematography and an oppressive sense of the walls closing in all too quickly. Yet, for all its shock factor, for all the earnest performances and crushing body horror Eubank throws at us, Underwater feels too manufactured, to encumbered with the ghosts of its own genetics, to stand steadfast itself in the genre pantheon. Enjoyable in a cheesy, one-and-done manner, but you’ll be reminded along the way of other, usually better films from which this one has taken its cues.