Synopsis: When a giant creature emerges from New York City harbour, and begins laying waste to the city, a group of young friends must journey through the devastation to save an ex-girlfriend. Told through the use of a digital handy-cam, the film captures the horror of this terrifying event.

Last night I had the pleasure of witnessing one of the more interesting monster films to come from the Hollywood pipeline in recent years. For several months now, fans have speculated on the mystery surrounding the promotion of the JJ Abrams produced epic, “tentatively” titled Cloverfield. The first trailer appeared with the premiere of Transformers last year, featuring no title and virtually no major stars, just New York City being blown to hell and back: this, of course, prompted massive internet and media speculation as to exactly what the film was about.

The basic premise is this: A group of twenty-something friends have gathered to celebrate the imminent departure of one of their group to Japan (Japan being a thematic nod to the kind of films this particular one owes its genesis to), when an enormous…. creature arrives in the Big Apple and begins to tear it apart. Kind of like Godzilla. Only with more destruction. The film is a kind of documentary style exercise as a group of people run through the city in an effort to get the hell away from this thing, all the while filming events with a video camera.

The end result, to be honest, is a bit of a mixed bag.

Filmed in a Blair Witch Project style, hand held and with a screen filled with zooming, focus issues and holding the damn camera straight, our cameraman would never make a useful documentarian. To begin with, the veritê style of the film is vastly off-putting, as the camera is tilted, dropped, swung and generally mistreated by the users. Our camera-person for the majority of the film is a young lad who gets called Hud a lot. He’s Robs best friend, and, truth be told, he’s just a little slow on the uptake. His lack of skill with a camera makes him by far the most irritating part of the film. For those with weak stomachs or an aversion to motion sickness, be prepared to feel slightly nauseous at times, as the shaky-cam kicks in during the more intense parts of the film. 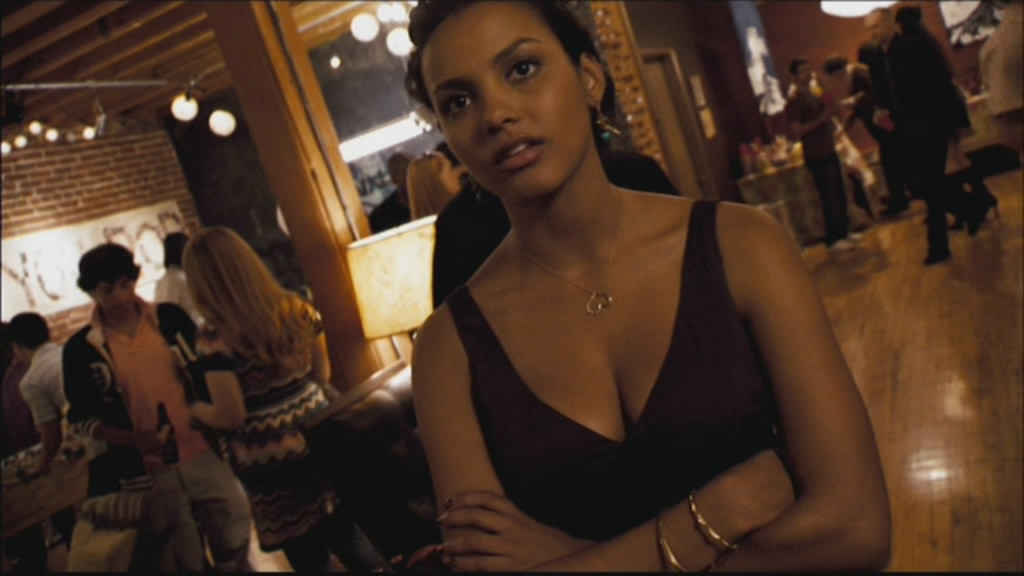 While the opening of the film is predominantly setup and “getting used to the camera” material, once the shit hits the fan, things begin to become more and more intense. Whereas before, the shaky-cam was annoying as hell, once our crew get down into the city and things blow up, the style actually suits the film. Which I found surprising. Most viewers will obviously crave the steady-cam or a long dolly shot, or something we are more familiar with in movie viewing parlance. Our brains have been trained to expect this kind of film-making. Yet the insistence to keep the camera moving and fling it around at all times makes for both a frenetic and frustrating experience for most, and goes against the way we believe films should look. As a film exercise, one could argue that it was both a success and a failure.

Director Matt Reeves has filled his cast with actors who are unknowns to the majority of the viewing audience. Part of this reason was to enhance the “realistic” style of the footage we are watching. We are meant to be watching an actual account, not a dramatised re-enactment. And having Bruce Willis or Julia Roberts poking their heads onto the screen every second moment would pull you out of what is at times quite intense film ride. That said, the way the film is shot is so reliant on the cameraman being able to get close to our cast to find out “what they are thinking” without relying on inner monologues or other cinematic trickery, that you find yourself slightly distant from the characters. As most people know, having somebody come up to you with a video camera and ask you to “wish somebody well” creates one of two standard responses: the class clown, somebody who will act the fool and go completely overboard, or alternatively, The Monolith: somebody who looks more like a rabbit caught in the headlights than somebody trying to deliver a heartfelt message to the person for whom it is intended. Nobody ever really truly opens up on camera. And this is the disadvantage of the film: in order to maintain it’s realism, we are never allowed to get too close to the characters, to develop a bond with them or understand their motivations past the clichéd generic sort so often miring modern cinema. 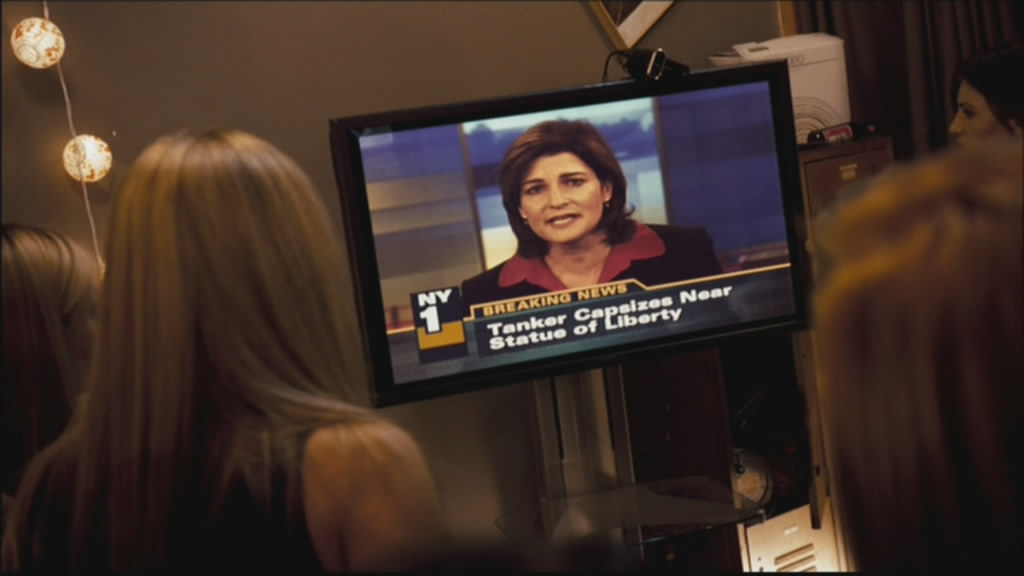 This, however, is hardly a major bone of contention in a film of this genre. When you go to see a monster film, you don’t go to see thespian excellence. No, you go to see stuff get destroyed, people get squashed/eaten/blown up etc, and really cool special effects. In Cloverfield, you get that in spades. Normal action or adventure films filled with special effects have plenty of steady, solid camera angles where the audience gets to see the money spent on visual effects easily and without complaint. Hell, The Matrix even slowed things down so you could check out the fancy stuff even longer that usual! Here, you don’t get that. The handycam attitude of the film means that when the panic and terror begin, the film descends into what you’d expect from people running for their lives. Plenty of shots of peoples feet running, legs pumping, and the occasional moment when the monster comes into full view. 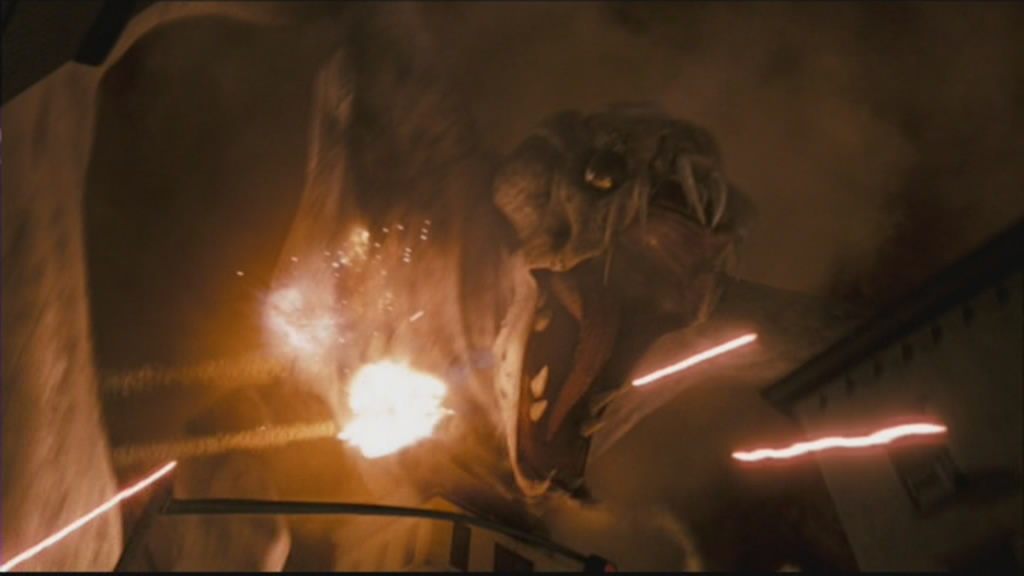 It’s here where people will be divided in their opinion on the film. In the same way that The Blair Witch Project relied on the unseen to deliver its chills, Cloverfield relies a lot on stuff you cannot see or hear. When the creature is not visible on screen, you still get the backup track of screeches, explosions, gunfire and the usual terrorist menagerie delivered through the surrounds of the cinemas speaker system. This effect, coupled with several jump-through-the-ceiling moments when you get to see stuff actually happening, for me, make this film far more effective than a simple point-and-shoot styled film. Sometimes it’s what you can’t see that’s infinitely more scary. 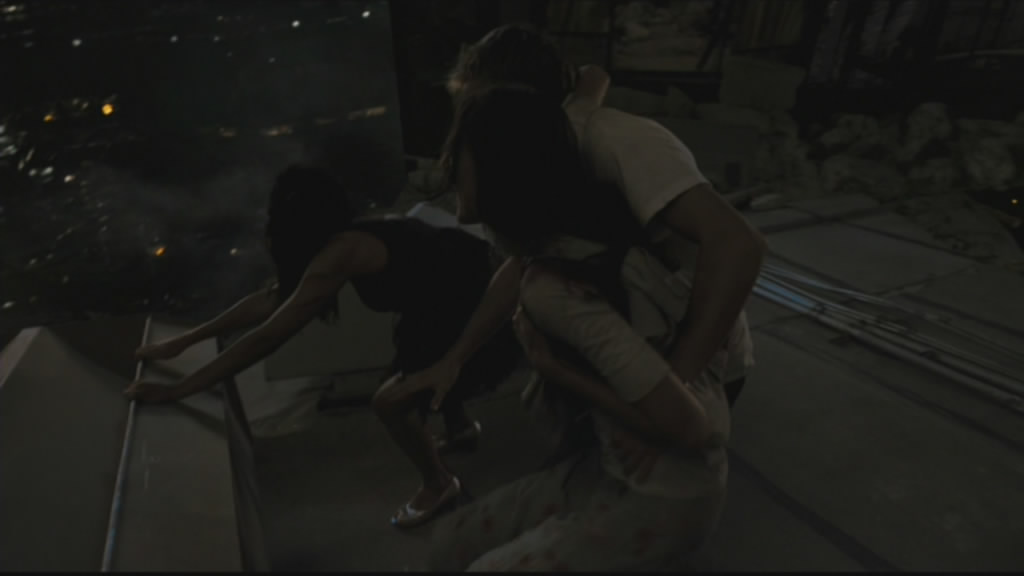 It’s also the crux on why this film will turn some people off. Because we are so used to seeing films in a certain style, clear and revealing things to the audience in a way we can comprehend, here, you’re just flat out trying to take it all in without missing anything. Shaky cam, even in a film with this much action and effects work, is still shaky cam. The effect of having the footage feel like it was found on a handycam in a park is a gimmick (and it is a gimmick) that works only for so long. Fortunately, Cloverfield doesn’t outstay it’s welcome, clocking in at a fairly fast 90 minutes. Yet the queasy nature of the footage will, no doubt, turn people away. 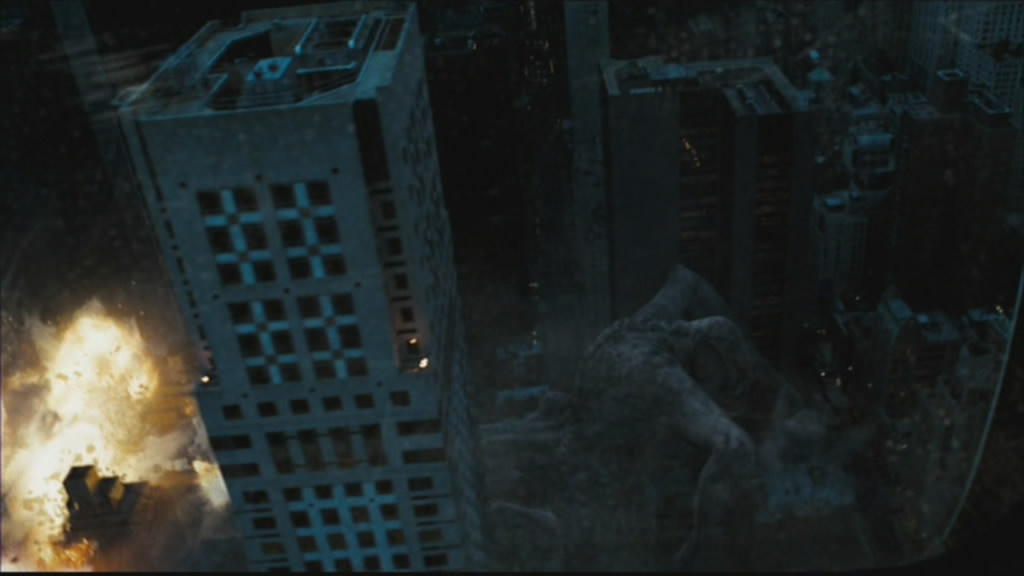 Cloverfield is an example of film-making for the YouTube generation. Fast paced, tense and exciting, with moments that will no doubt make the next Scary Movie-styled comedy homage, Cloverfield is exactly what you want in a modern sci-fi thriller. No matter what you think of the film, one thing’s for sure: for a few moments after the end credits begin, you’ll have to get up and pick your brain up from the back of the cinema.

A few nights after seeing Spielberg’s recent War Of The Worlds remake, I had a nightmare where I found myself being chased by those cinematic tripods through a bizarre city at constant risk of being stomped, evaporated by beams of energy or crushed by falling debris. You know the kind of dream, where you can never run far or fast enough to get away.

I had that same feeling again, watching this film. And I thoroughly loved it.