Hope you’re not afraid of the dark!

Did you know Vin Diesel had a small, uncredited role in Steven Spielberg’s Awakenings? No? Neither did I until I was researching this review. Although a segue between Awakenings and Pitch Black is rather lacking, I just thought it was interesting to note. Anyway, back to Pitch Black. Made in the late 90’s, and released in 2000, this Aussie-shot sci-fi film quickly became a cult classic for not much beyond Vin Diesel’s muscular anti-hero, Riddick. Diesel would go on to reprise the role in (to-date) two further films in this franchise, Chronicles Of Riddick and Riddick, yet neither of those films, in my opinion, stacked up against this film, the original. Having seen Pitch Black during its theatrical run, and basking in what was then one of the finest “spaceship crashing through the atmosphere and into a planet” action sequences ever filmed, I returned to this early Diesel-led film with a huge degree of anticipation.

Diesel plays Riddick, a dangerous convicted criminal being illegally transported by a bounty hunter, Johns (Cole Hauser) to a far-off prison. When the spacecraft they are traveling in crashes into an uninhabited world, surrounded by three suns, Riddick and the survivors, including ship’s co-pilot Fry (Radha Mitchell), a preacher Imam (Keith David), a free settler Shazza (Claudia Black) and others, must fight to survive with almost zero supplies and virtually no hope of rescue. When the survivors also discover that the planet’s three suns are about to strike a unique lunar balance that will throw the planet into total darkness, they suddenly learn that hidden in the darkness are creatures that will devour them once the suns go down. In a race for survival, and with nobody trusting anyone else, who will make it off the planet’s surface, and who will be lost forever in the pitch black?

It’s fair to say that time hasn’t been especially kind to Pitch Black. Not so much for its story, or its characters, both aspects of which still remain as strong and vital as they did on release; rather, it’s the technical aspects of Pitch Black that haven’t aged all that well. 2000-era CG looks…. well, bad. And unfortunately for Pitch Black, it uses CG a lot, especially in its latter stages. The alien creatures fought by the survivors of the crashed spacecraft are a mixture of CG and practical puppetry (at least, I think they are), and neither are terribly convincing – perhaps it’s a good thing they’re largely shadowy silhouettes and in-the-dark shapes for the majority of the film. In saying that, I still have a lot of love for this early Diesel creature-feature. From its sound design, to its startling visual style and reach-for-the-stars scope, Pitch Black remains a sharply written, deftly directed piece of hokum that delivers on its premise. 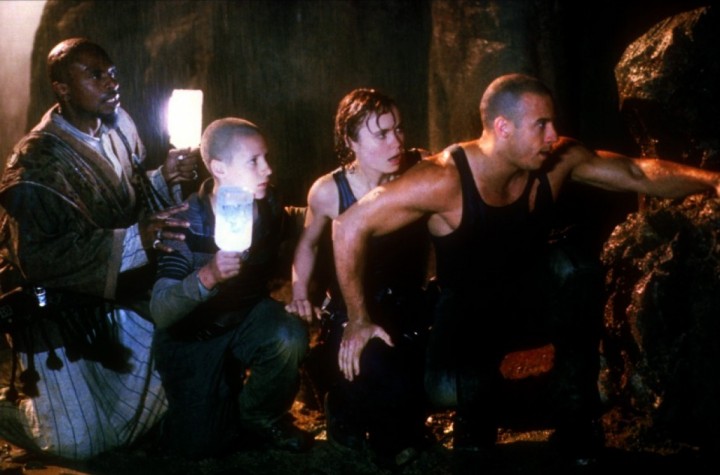 It’s also worth noting that Pitch Black was one of the early US DVD editions to come along with a DTS audio track alongside the Dolby version. Back in the early 2000’s, this wasn’t commonplace – certainly not as much as it is now, where almost all BluRay discs come with a format of DTS as the dominant codec – and it’s solely for this reason I ordered it from the US instead of picking up the local, Dolby-only version. Pitch Black is worth a look almost entirely for sound design if for nothing else. As a work of sound, it’s a terrific movie, delivering pinpoint surround activity that envelops and captivates from it’s blistering sonic assault opening, to its creature-filled third act. 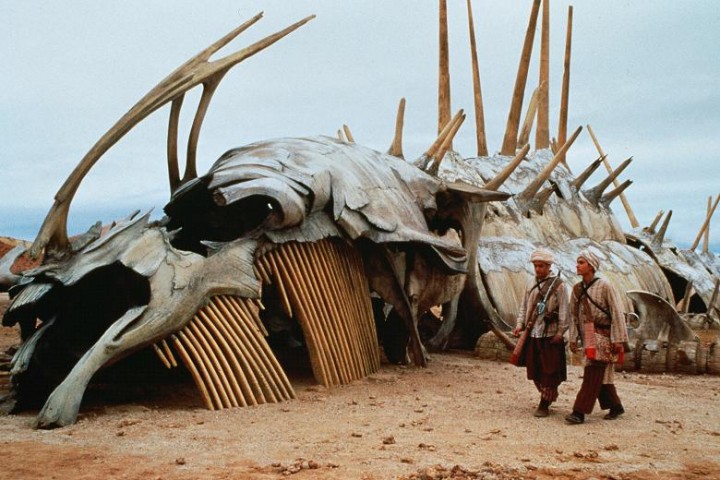 If you’re a sci-fi junkie like myself, you can’t help but admire this movie. Filmed with a limited budget (around $23 million, according to the internet) for a genre film, and featuring almost no A-list talent (Diesel would appear in The Fast & The Furious the very next year, catapulting himself into that category rather quickly) at the time, David Twohy’s creature flick had to overcome odds stacked firmly against it. The marketing campaign, I must admit, was a big selling point for me. The idea of creatures that can only come out in the darkness? Hell, that’s some scary shit right there. Perhaps that’s why they did something similar in…. oh, a lot more films since then. The story is fairly simple, and the characters themselves painted with broad, elemental brushstrokes; particularly Johns, whose “addiction” isn’t really mentioned until midway through the movie, whereas I figured this was the kind of thing it might be handy to know about early. Twohy peels his characters like onions from a story development perspective, with almost the entire cast keeping “a secret” in order to survive in the environment they are trapped in.

Twohy builds up the suspense on his creature flick with a strong sense of style. He gives us glimpses, hints, imaginative ideas as to what these strange creatures might look like fully revealed, but he holds back. As long as he can. The screenplay, by Jim and Ken Wheat, is resolutely pulp-inspired, lacking real depth when it can offer mild, often predictable (and occasionally not) twists and turns in what is an effective ensemble piece. Sure, survivalist films are a dime-a-dozen in Hollywood to some degree, but Twohy’s attempt to extrapolate genuine fear and a sweaty, white-knuckled excursion into isolation and outright terror is actually reasonably effective. 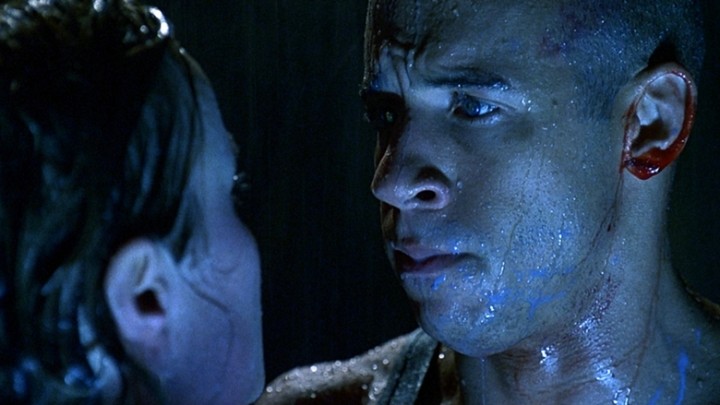 The main cast, particularly Radha Mitchell and Vin Diesel, sell their performances well. Mitchell, complete with Aussie accent in place (or some semblance of one, anyway) never quite feels like the right stuff for the part, especially early, but by the end of the film has earned her ending with Diesel’s Riddick that makes it such a mournful, sorrowful moment (spoilers, for a film 15 years old? Sure.) Diesel, meanwhile, acquits himself well as the rumble-voiced anti-hero. Riddick isn’t a nice guy, even by his own admission here, and it’s a brave actor who can take that kind of murderous villain-type and turn him into somebody we actually root for, we hope to see walk out of this alive. His retinally-enhanced eyes are creepily effective (and I guess groan-worthy necessary considering where the plot goes here) and make for a larger-than-life character who nearly overtakes the film. 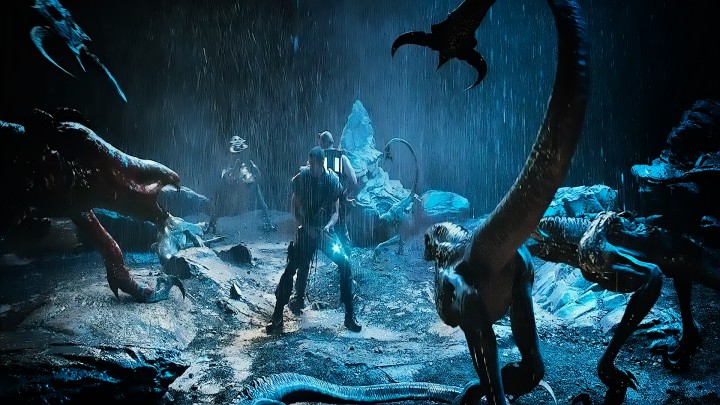 Second-string supporting roles to “I could listen to him read a laundry list” Keith David, as a religious figurehead (guess you need one of them in a film about survival!), Farscape star Claudia Black as a “Let’s head West” settler of sorts, and Cole Hauser as the antagonistic bounty hunter Johns, offer some minor width to the narrative, but as you’d expect in a film of this genre, they’re merely making up the numbers, and it’s only a matter of time before they become creature food. It’s fun guessing how, though.

Although its sequels squandered the solid foundation provided by Pitch Black, this original film is worth revisiting if you’re interested in good quality B-grade sci-fi. No, it’s not entirely predictable, and it has a number of moments that will legitimately make you jump (or at least squeal through fingers if you’re watching, like me, in the dark), but for a raucous bit of genre nonsense that affords plenty of highbrow ideas and almost zero intellectual payoff, you could do a lot worse than Pitch Black. If you’ve never seen it, take this as my invitation to you to do so. I don’t think you’ll regret it.