The Abyss is another of those rare films that actually improves with a Director’s Cut. The Abyss met with tepid commercial success in 1989, alongside equally tepid critical decrying that the film was a sucker-punch ending at the end of an absorbing two hour submariner thriller. The Abyss’s troubled production began the long-standing belief that James Cameron was a brutal director, demanding a lot of his actors (too much?) to achieve a desired outcome. Set almost entirely beneath the waves, and argument could be mounted that Cameron’s love of the sea, something he would tackle with Titanic (another film to feature deep dives) and one of the upcoming Avatar sequels, began with The Abyss. Ed Harris and Mary Elizabeth Mastrantonio have both indicated the shoot was difficult – Harris stated he’d never talk about the film, while Mastrantonio was quoted as saying “The Abyss was a lot of things, fun to make is not one of them…” – but you wouldn’t know it when you watch the film. Torturous underwater filming, technical difficulties and pushing computer graphic technology to its limit (this was 1989, remember), claustrophobic conditions and a director known for not bowing to the “stars” of his film, The Abyss Director’s Cut remains one of James Cameron’s most brilliant narrative films. Inserting some 20 minutes back into the theatrical version, Cameron’s sci-fi underwater thriller is more expansive, more character-driven, more everything, in it’s extended identity: it is not, however, a failure.

After a US Submarine, the USS Montana, is attacked and sunk out at sea, the military decides to send a SEAL recovery team to salvage the Trident missiles aboard the vessel. Led by Lieutenant Coffey (Michael Biehn), the SEAL’s are sent to a civilian underwater drilling platform, designed by Dr Lindsay Brigman (Mary Elizabeth Mastrantonio) and operated by her estranged husband, Virgil “Bud” Brigman (Ed Harris). Aboard the vessel, they are struck by a hurricane, causing damage and rendering the mission in danger of failure – until a strange, alien entity comes aboard, revealing that deep beneath the surface of the ocean, they are not alone. With Coffey becoming more paranoid due to a stress disorder, and the rig at the very edge of an abyssal trench, Virgil descends to the limits of human endurance to try and prevent the detonation of a nuclear weapon, accidentally dropped there following Coffey’s descent into madness.

One part military thriller, one part love story, and a whole heap of underwater science fiction, The Abyss’s scope is entirely apropos to Cameron’s sense of epic storytelling. Noted for his use of ensemble casting, especially coming off Aliens, Cameron handles many balls in the air with The Abyss’ zig-zagging themes, and by and large it all works wonderfully. Some have derided the film’s concluding sequence, largely removed from the theatrical version, which sees the underwater aliens rise up and threaten to destroy humanity with enormous tsunamis surrounding the continents. It’s a “stop fighting, you lot” motif that, if you watch it cold, smacks a tad of supercilious sermonizing. Cameron jabs at the military (the opposite to his war stance on Aliens, by contrast), and as he would with Titanic, shoehorns a romance subplot into the events of the film through Ed Harris and Mary Elizabeth Mastrantonio’s combative protagonists. 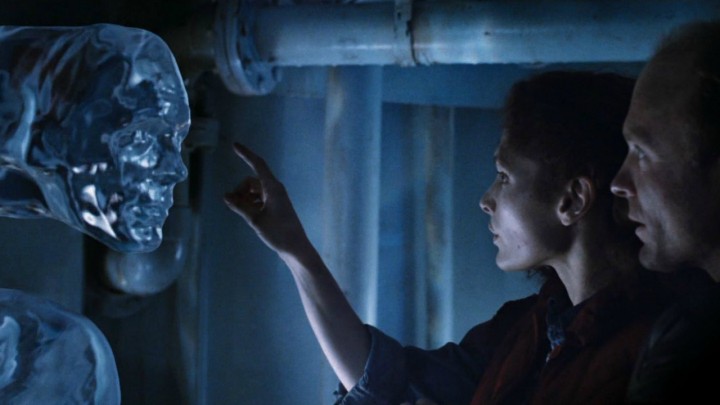 While Cameron’s subtext is hidden by the gloomy underwater setting and a nuclear-tense overriding arc, The Abyss is the epitome of Cameron’s broad-spectrum shotgun approach to narrative. Biehn’s pressure-affected Coffey, as he succumbs to paranoia and sweaty, claustrophobic tension due to being cut-off from his superiors above, is the catalyst for both the near ruin of the rig (named the Deep Cove) following a hurricane on the surface and the first contact scenario with the humans as they seek the sunken USS Montana. Cold War tensions bubble away in the background (the film came out the same year the Berlin Wall came down, and Soviet Russia collapsed a few years later) as American and Russian forces face off above the waves, while Coffey’s belief that the aliens are actually Russians keen to steal the subs cache of nuclear warheads.

While the theatrical edition removed most of the “alien message” aspect of Cameron’s story (which impacted early critical evaluation), the material was reinstated for Cameron’s Director’s Cut; it either works for you, or it doesn’t. The film’s “alien” aspects are threaded throughout the film, from the USS Montana’s sinking in the opening, to the reveal of the enormous underwater alien craft, so it’s not like the film didn’t build up to it, but the impact of the aliens’ ultimate message – a kind of interstellar slap-on-the-wrist, if you will – left even the film’s most ardent fans a little bemused. Basically, it boiled down to Ed Harris talking a bunch of ET’s out of killing us all.

The strength of the film lies not so much with its terrific production values (the film was shot in giant underwater tanks at an abandoned nuclear power station – I guess that’s rather appropriate considering the themes of the story – in South Carolina) but rather Cameron’s canny casting. Having Ed Harris as your main lead is always going to give the film a sense of legitimacy, and as Bud, Harris absolutely nails the character. He’s a frustrated, frustrating, all-too-human man under pressure and having to lead his crew through what would be an utterly terrifying scenario – Harris’ command of the screen, of his team, is effective. His on-screen wife, Mary Elizabeth Mastrantonio, is solid as Lindsay, but a Sigourney Weaver clone she is not. Mastrantonio plays a “rock hard bitch”, but her antagonism is drawn from the reaction of the rest of the characters, not quite through any of her own dialogue or actions; at least, not to the level her character is supposed to be. But their chemistry together is wonderful, particularly crucial moments when they’re either about to drown, or be revived. 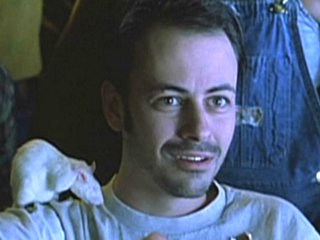 The rest of the cast are a typically rag-tag team of no-hopers and blue-collar workers, alongside Michael Biehn’s Coffey. Leo Burmester’s De Vries, one of Bud’s right-hand men and riggers, provides the film with a rough-diamond type, while Kimberly Scott as “One Night”, a woman who spends her time driving the mobile submersible robots used to connect hoses, grapple cables, and provide video feeds to inaccessible places, gives us another female character in an otherwise all-male ensemble. Of note, Todd Graff, who plays resident conspiracy theorist Hippy, has a delightful relationship with a white rat that serves to introduce one of the films most iconic moments – that of Bud using a breathable liquid to descend the abyss in search of a lost nuclear device. The “breathing underwater” footage looks real as hell, and according to the information on the making of the film, Harris allowed himself to be strapped into his suit and have the helmet flooded with pink water, the knowledge of which makes these shots and sequences all that more riveting. Probably also explains why Harris famously vowed not to talk about the film again since.

Although The Abyss tackles some gripping themes, and does them well most of the time, the film fumbles in a few areas that prevent it from being an outright classic. The alien reveal at the end notwithstanding, the film’s dialogue and occasionally jagged character development make for at-times frustrating viewing. Some of the lines Cameron wrote for the film are just screechingly thudding when spoken aloud, even by actors with the abilities of Ed Harris, and the byplay between those on the screen lurches from smile-worthy nice to eye-rolling awful. Admittedly, not much has changed with Cameron’s writing in the years before or since, with his tin-eared appreciation for what sounds “cool” or meaningful on the page often grinding gears when trying to arrive on the screen. 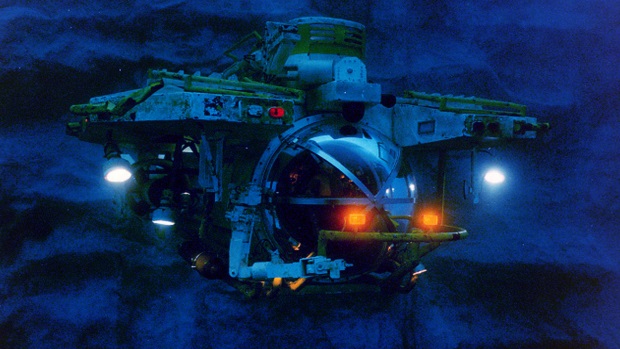 The soldiers’ mission, while hinted at as being top secret, is largely forgotten through portions of the movie, as Cameron attempts to juggle that subplot with the alien arrival, which is handled well most of the time. What begins as an all-too human mystery thriller becomes a fanciful, bullish attempt to fling high sci-fi fantasy at the screen and broaden the white-hot focus of undersea danger with world-wide apocalypse. Something never quite gels, and the film is the poorer for it.

Yet, even in light of this uneven thematic thrusting, Cameron’s handle on acute action and terror – namely, of drowning hundreds of feet below the waves – is second to none. The Abyss conjures up all manner of dark, flooding fears, as the body count mounts and the stakes rise ever to high, and whatever you make of the characters, the writing or the basic premise, there’s nobody who can deliver heart-stopping thrills like ol’ Jimmy. You could say time hasn’t been too kind to The Abyss’s political undercurrent, not the least with the dated time period placing us in an era of Cold War hostility, but for a thrilling, Hitchockian gut-churner below the sea’s surface, they don’t come much better. Caveats in place, The Abyss is terrific.