Cult director Shane Black’s return to the Predator franchise – he appeared alongside Schwarzenegger in the ’87 original – was seen by many as a return to greatness for the franchise. It legitimised Fox’s decision to soft-reboot the property with Black at the helm, off the back of his critically well received The Nice Guys, and given the director’s propensity for vulgar dialogue, purple action and hyperbolic style, it seemed at first glance that The Predator would be a lock for the monster hit of the year. Then, the controversies circled, including the removal of a convicted sex offender from the film to much anguish from actress Olivia Munn, followed by a miscalculated defence from Black himself, as well as the usual reports of reshoots and re-configuring the film any number of ways, and The Predator started to have a little bit of a stink about it. The end result is a film that, despite being made in 2018, feels like it belongs back in the 1980’s, a modern throwback to muscular quips and wanton violence, only without the charm and delicacy required to pull it off.

Army Ranger sniper Quinn McKenna (Boyd Holbrook – A Walk Among The Tombstones) is on-mission when he encounters a crashed alien spacecraft containing a Predator. Seconded by a paramilitary scientific department, the “Stargazer Project”, he is initially imprisoned by director Will Traeger (Sterling K Brown – Black Panther) and then sent to a psych ward alongside a rag-tag bunch of fellow “Loonies”, including ex-Marine Nebraska (Trevante Rhodes – Moonlight), Tourettes-afflicted Baxley (Thomas Jane – 1922), his friend Coyle (Keegan-Michael Key – Tomorrowland) and the newly involved evolutionary biologist Casey Brackett (Olivia Munn – X-Men: Apocalypse), all of whom decide to take down the rogue Predator and save Quinn’s young autistic son, Rory (Jacob Tremblay – Room) from almost certain death. Stopping them, however, is a new form of Predator, larger and more fierce than any previously seen, who is intent on erasing all trace of the smaller Predator from our world.

Co-written by Black and Fred Dekker, The Predator is a clumsy, confusing mish-mash of hoary 80’s action tropes, preposterous action-film dialogue and the best effects 2018 technology can buy. It throws together all the cliches and drunkenly lurches between set-pieces, lacking cohesion amidst the cacophony of violence, dullard exposition and some of the worst depictions of mental illness in modern cinema. Casting a young actor of Jacob Tremblay’s abilities and making him an autistic savant through a prism of sci-fi hokum fits poorly within established Predator lore, but for Black, whose craft involves the puerile and juvenile sensibility of vagina jokes and raging misogyny, The Predator probably ticks all possible boxes. A poor-man’s Josh Duhamel, Boyd Holbrook’s McKenna is a flat, urbane action hero, lacking charisma or purpose other than to “protect his son”, whom he rarely sees although remains hero-worshipped by, and his patriotism, duty or mild sense of being is simply to be in the right place at the right time. Much like the majority of this movie, really. 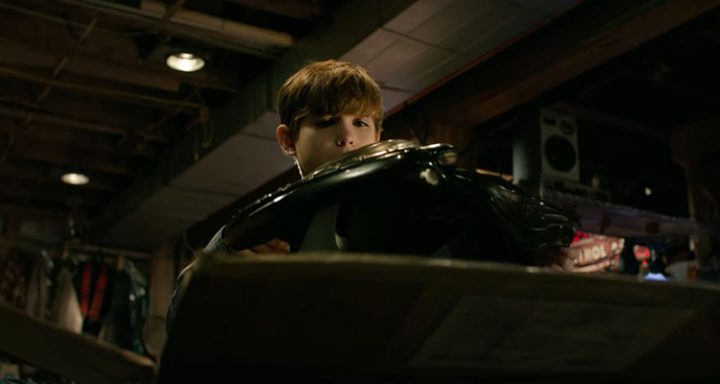 The Predator is a film of convenience. The characters all just happen to be where they need to be to propel the story forward, the exposition is given via Munn’s woefully uneven Casey Brackett (how the hell does an evolutionary biologist know her way around an automatic machine gu-oh wait this is America) in plodding, half-breathed snippets, and the film’s central human villain, a teeth-gnashing Sterling K Brown, is reduced to general cowardice and pompous aggrandising. It’s egregiously simplistic storytelling, framed via Black’s persistent 80’s aesthetic of shoot-first, ask-questions-later plotting. Black’s laboured callbacks to the original film, lines such as “get to da choppah” and “you’re one ugly motherfucker”, are all inelegantly handled and designed to draw cheap laughs at the franchise’s expense, and the whole plot feels designed more for marketing than actual coherent storytelling; a surprise cameo mid-film to link with Predator 2 is a nice touch, however. It’s a grab-bag of gratuitous thrills without any substance, more’s the pity. The excitement generated is entirely hollow, a disparate clutch of ineffective characters and iniquitous editing reducing the whole thing to a diverting failure. Even the inclusion of Alan Silvestri’s iconic rat-a-tat theme music cannot muster more than a wet “meh” from this willing viewer. 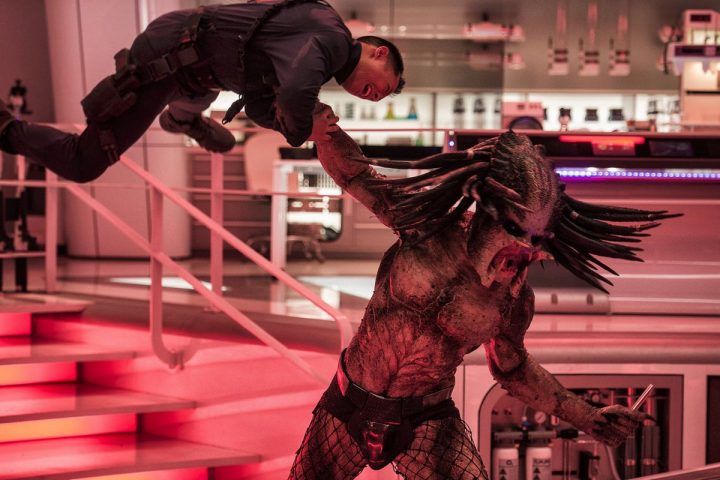 Calling The Predator fun might be stretching things too far; perhaps calling it lazy silliness in popcorn-cinema form might be closer to the mark. There’s laughs to be had if you’re willing to go with it, but the horrifying attitude to mental illness is appallingly obnoxious (Thomas Jane’s Baxley, who spurts out his tourette-tic vulgar lines with aplomb but never once approaches a vague semblance of empathy) and most of the violence, the primary reason we’re all watching, is blanketed by some remarkably bad editing. That, and you can never really see what’s going on whenever a predator is on the screen, such is the smothering of darkness and rapid-jitter camerawork. Bodies are ripped to shreds but the film seems unwilling to really grab the gore by the throat and show it to us: there are a few minor but impressive scenes of brutality, it should be mentioned, so don’t think this is a completely antiseptic PG-Predator movie, but whereas the first film featured all kinds of blood and guts in full technicolor glory, Shane Black’s sequel hides a lot of the viscera in darkness, robbing it of that dynamic 80’s vibe the director so obviously subscribes to.

The Predator is bewildering in its execution and problematic in every area that matters. The writing is hopelessly devoid of humour, despite the addition of a number of ribald and eye-rolling gags, the violence is toned well down for what I was expecting, and the clumsy story and indifferent characters never gel together in a manner that supports our interest. The mind-boggling stupidity of the film’s climactic action sequence utterly eviscerates the potential for the film to become an underrated classic, striving for possible sequels before achieving success in its own right. It’s obvious what Shane Black and his cohort were aiming for, in terms of bringing a generic 80’s B-movie back to the big screen, but they missed the mark by a wide, wide margin. In a franchise of increasingly disappointing sequels, perhaps it’s time to let the ugly motherfucker rest.

2 thoughts on “Movie Review – Predator, The”