The world of tomorrow. Today.

Like most, I’m a huge fan of director Brad Bird. The former Simpsons consultant and Disney animator slid into the director’s chair of what would become Warner’s best animated film of the last 20 years, The Iron Giant, before resuming his acquaintance with the Mouse House for Pixar’s The Incredibles, followed by Ratatouille, cementing himself as one of the top directors of the medium getting about. Then, Bird helmed the fourth of the Mission Impossible films, Ghost Protocol, to enormous critical and commercial success, and it seemed his live action chops were just as solid. So what of his latest, the big-budget commercial mediocrity that is Tomorrowland? Led by the always affable George Clooney, as well as a digitally-youthful Hugh Laurie, Tomorrowland’s promise of fun and adventure locating a mysterious “city of tomorrow” seemed a sure-thing for audience enjoyment. But for whatever reason, audience’s failed to connect with it, and the film’s whizz-bang mix of The Rocketeer, Flight Of The Navigator and, if you can believe it, Men In Black, was left as a mere also-ran in the vast glut of summer tentpole films flooding the cineplexes this past year. But did Tomorrowland deserve such a fate? Critics would say yes (mainly), but what about ordinary, average dreamers? What do we say? 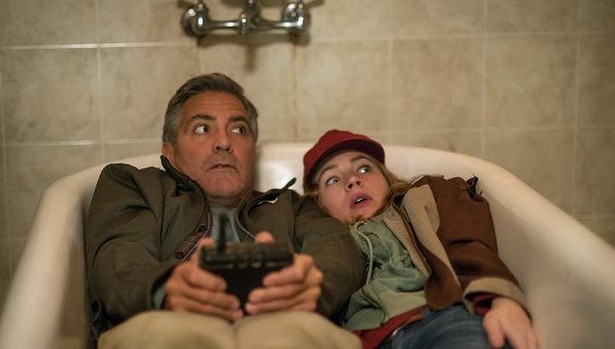 Star George Clooney plays Frank Walker, an inventor exiled from the mysterious Tomorrowland by its creator, David Nix (Hugh Laurie), following an altercation in his younger years (personified by the youthful Thomas Robinson), where he meets Athena (Raffey Cassidy), an automaton designed to lure him in via his unique talents. In the present day, Walker teams up with optimistic teen prodigy Casey Newton (Britt Robertson) to track down the whereabouts of the mysterious Tomorrowland, only to discover that the magical utopia the world promotes itself as is actually something a whole lot darker. It seems the mysterious city, which exists in an alternate dimension, and run by the controlling David Nix (Hugh Laurie), has exiled Frank from its wondrous sights, after Frank made a discovery which threatened the entire planet.

Tomorrowland isn’t, as I found when I Googled the film, based on the massive electronic music festival held annually in Belgium. It’s an original story (so few of those left these days!) devised, in part, by director Bird and co-writer Damon Lindelof, together with Entertainment Weekly writer Jeff Jensen. One part steampunk-alternative fantasy, one part mystery adventure, and another part futurist sci-fi opus with grand ambition, Tomorrowland’s schemes and themes are nigh universal (and, if I may be so critical, a tad sentimental here) and it’s bracing, free-air sense of parkour-scripting enjoy a strong sense of spirit, even when the film drags itself into a mire mid-way through. Tomorrowland is a massive creative venture – not the least because it’s an entirely new concept plucked from elements of Walt Disney’s long-dormant visions for the world after he passed – and a risky one; would audiences by the idea of an alternative world existing just above our own, where the consequences of what happens there effects everything here? Regardless of your opinion on the final product, hats off to Bird and his team for attempting something original. 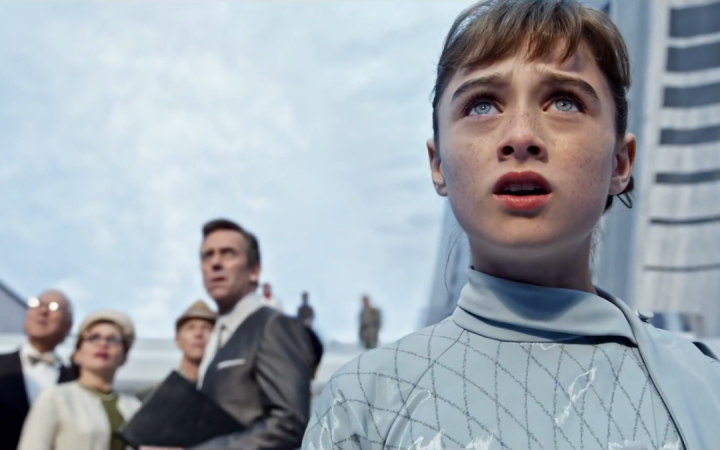 Tomorrowland has some really great ideas, and for the most part carries them off well. The execution of the “Tomorrowland” concept itself, a dizzying Utopian cityscape where gravity and fantasy seem interchangeable, is superb, and the opening sequences involving its early discovery are a marvel of childlike innocence and awe-struck reverence. It’s a capital-S spectacle, to say the least. Bird drives his film with the byplay between lead actress Britt Robertson, as Casey, and Clooney’s angry-little-man Frank Walker, set predominantly on “present day” Earth. Clooney and Robertson’s characters counterbalance each other, representing opposite sides of the core thrust of Tomorrowland’s narrative venture, that humanity could either be a force for good or bad, it’s only up to the best and brightest to choose – at least, that’s what I got out of it – and the performances by both actors are excellent. Clooney excels at this kind of thing (he played a similar personality type character in 2008’s Leatherheads) and Robertson (better known for roles in TV series such as Life Unexpected and Under The Dome) seems fresh-faced and game for anything.

They’re abetted by a terrific performance from Raffey Cassidy, as Athena the automaton, who can kick butt like Neo in the Matrix whilst never getting a hair out of place, and looking cute as a button in the meantime. Athena could have been yet another “innocent machine” struggling with the complexity of human emotion and/or morals, a la Brent Spiner’s Commander Data from Star Trek, or Alan Tudyk’s Sonny from I Robot, but Cassidy imbues her character with the underlying appeal of an essentially immortal being running purely on programming coming to terms with the mortality of those around her. It’s a tough ask, for such a young actress, but Cassidy sells it magnificently, and she’s one of the strongest aspects of the whole film.

Hugh Laurie bobs in here and there as Tomorrowland’s resident administrator, David Nix, a catalyst for the animosity felt by Frank towards the utopian paradise from which he’s been exiled. Laurie spends much of his screen time being de-aged, a lot like Jeff Bridges in Tron Legacy, only much more effectively. A moment comes towards the end where we see him in his actual older self; the moment is fleeting, but the juxtaposition works well – you have to wonder how much money they spend de-aging Laurie in the computer when they might have been better served just casting a younger actor in the first place, and aging him for a split second or so when the scene called for it. Still, Laurie makes a convincing and empathetic villain: his exposition monologue (because this is a script with Damon Lindelof’s fingerprints all over it) is a tad overripe, and his motivations don’t really sit well considering the tone of the rest of the film, but Laurie is solid in the part. 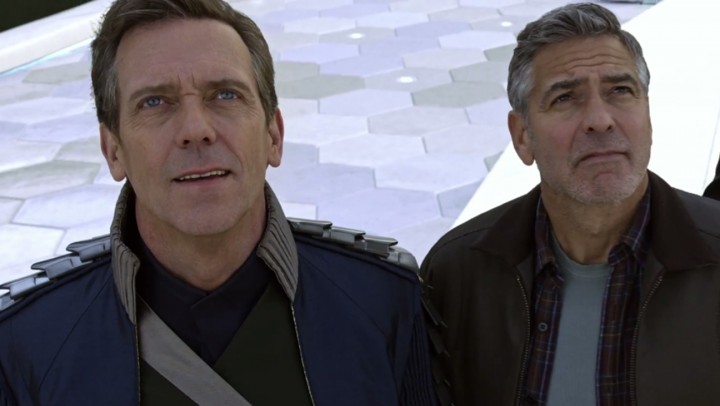 Part of what I loved about the film was its attempt to shoot for the stars. It’s not a film that exists in a committee room, and doesn’t look like a typical “franchise” film in that it sets out to establish a world beyond the opening and closing credits of this film (blessedly), but rather an attempt to revisit the kind of film-making that made the 80’s great. Large in concept, and utilizing the best modern visual effects money can get, Tomorrowland looks stunning, and the sound design is – in a word – astonishing. Bird riffs on classic adventure films such as The Rocketeer (a similar 50’s tech theme runs through the movie), hints of Flight Of The Navigator, a whiff of Short Circuit, a touch of Blue Sky’s Robots city design, some journeyman-hero work a la The Last Starfighter, some nice work with outmatched and outgunned heroes having to use their wits to escape the (actually frightening) bad guy henchmen: while it may feel like a soupcon of other genres or other fantasy films, Bird makes it work more often that not.

Where the film doesn’t quite work is a sagging midsection, where the bulk of the character development lies. It’s here that Tomorrowland feels a bit sluggish, working too hard to make us care for why these disparate people would work together as the mystery begins to unwind. It’s not a movie-killer, but between the spectacular opening and the action packed final act, Tomorrowland’s spare-tyre middle does need a bit of a trim. The other aspect of the film I didn’t really think worked was the very end, a neat little resolution that appeared to tie off things way too easily, and never give us a chance to truly wallow in the heroes’ success. Sure, we get to see the expansion of Tomorrowland’s vision for humanity, but the speed at which it’s carried out jars against the pacing of the rest of the film. Still, for a film running over two hours, I guess Bird needed to get to the end quickly. 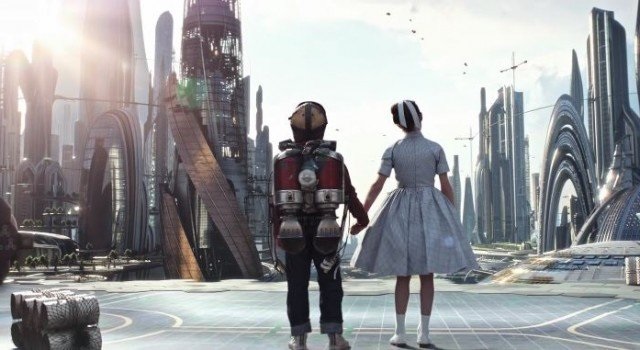 I guess I’m in the minority who found Tomorrowland a blast from start to almost-finish, with compelling ideas and characters (even though Britt Robertson’s Casey was the weakest-written of the lot, the actress did solid work making me like her and not come off as a whiny, needy, arrogant bitch) and of most interest, a unique and revelatory concept that the film handles pretty well. Sure, there’s things and ideas you could pick apart if you really tried, but I think what Brad Bird has tried to give us is a film that feels like a throwback to those innocent adventure movies from the 80’s, like The Goonies or Explorers or whatever classic childhood film you fancy. Cynical, jaded critics can go f@ck themselves; this film delighted in delight.

There’s a cavalier approach to logic, but the energy Bird gives the film and the sense of impending danger – especially throughout the middle of the film, when it becomes a chase movie for a while – is engaging. I really enjoyed this film – it’s a level above disposable Disney nonsense such as John Carter, but nowhere near the horrendously pompous The Lone Ranger: I can’t understand why Disney will take a bath on this project [the film barely made back its production cost of $190m], because it deserves a far more appreciative audience than it apparently received. Definitely entertaining.