Disney continues strip-mining its animated villain legacy with yet another dreary live-action all-star remake/sequel/prequel in Cruella, starring Emma Stone in the title role of everyone’s least favourite Dalmatian killer. This visually suffocating showcase for the talents of both Stone and co-star Emma Thompson, playing a far less effective version of Meryl Streep’s Devil Wears Prada boss bitch, is both frustratingly overproduced and at least an hour too long, and lacks any sense of fun, excitement or entertainment as it wobbles through ghastly parental tragedy and silly, asinine CG tomfoolery with the dexterity of a newborn puppy; that is, without any whatsoever. Similarly to the problems that plagued Maleficent (and moreso that film’s sequel), the producers and writers of Cruella have tried to inject some semblance of humanity or empathy onto a character utterly irredeemable in her animated form, giving us Disney’s chain-smoking dichotomy-afflicted villainess with a little more depth but a lot less charisma or charm. 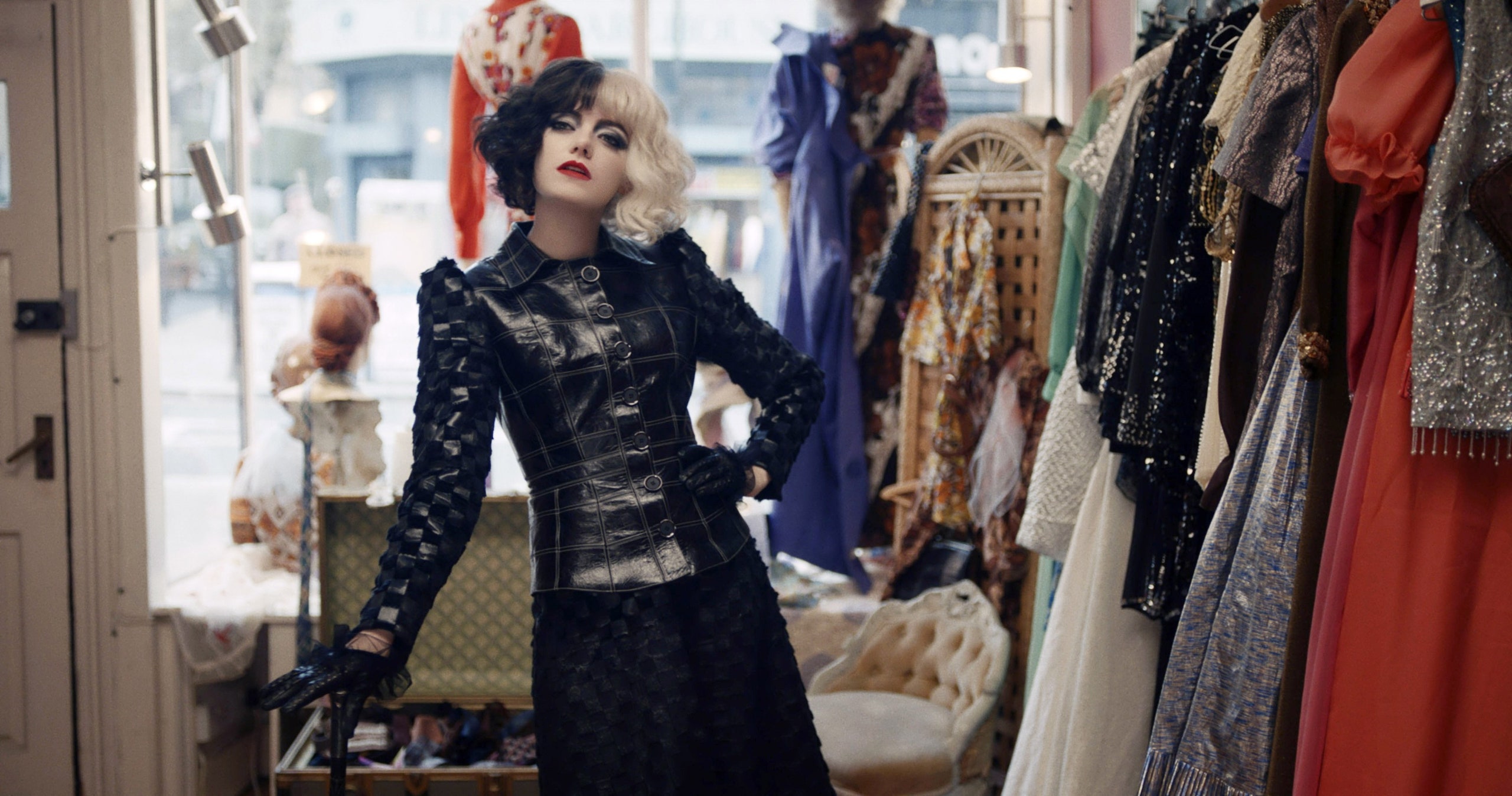 Originally depicted in the 1956 book “The One Hundred And One Dalmatians” by author Dodie Smith, and brought to animated life in Disney’s 1961 film of the same name, Cruella De Vil was a singularly one-note villain fixated on fur, whose aim is to slaughter innocent Dalmatian puppies to make a glorious coat with their pelts. Betty Lou Gerson famously voiced the dastardly damsel with a penchant for black and white costumery, and although I consider the overall film to be one of the studio’s lesser products, Cruella herself remains an iconic and enduring creation at the hands of Disney’s artisans. The decision to bring the character back to life in live-action, in the starring role, no less, is a perplexing one, and yet remains core to Disney’s current predilection for upending our expectations of many of their famous stable of IP, most notably Cinderella, Beauty & The Beast, Aladdin and Mulan, in which fleshing out these fairly single-dimensional creations in feature-length effects-heavy live-action movies works to varying degrees of success. I say perplexing because it’s not as if people were crying out for a film to focus on Cruella De Vil, much less another Dalmatians-sourced film given the relatively small success of the Glenn Close-led remakes from mid and late 90’s. Exactly who asked for this? 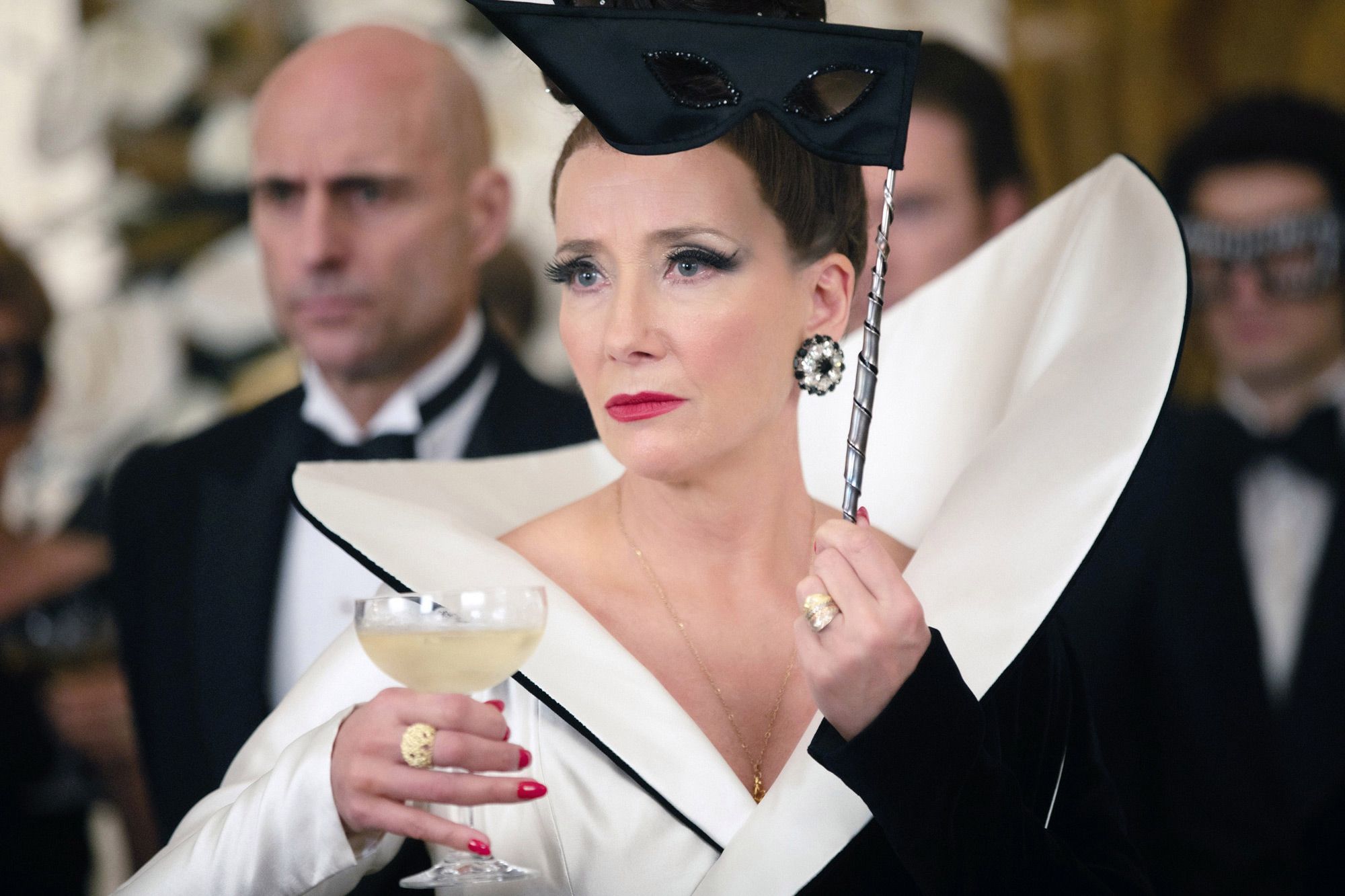 Cruella sees Emma Stone play Estella, a young orphan caught up in the dream of working at the prestigious London couture house run by the demanding Baroness (Emma Thompson, playing it to the absolute hilt), accompanied by a pair of petty criminals in Jasper (Joel Fry) and Horace (Paul Walter Hauser). The film also stars Mark Strong as the Baroness’ valet, Emily Beecham as Estella’s adoptive mother for the film’s opening act, and Kirby Howell-Baptiste as a journalist friend of Estella’s who aides her when she becomes the far more sinister Cruella. You see, Estella has what some might call a disorder which sees her split personality emerge following moments of great tragedy or persecution, and at the hands of the Baroness those moments occur with increasing frequency. The film’s story, credited to three people, and screenplay, credited to a further two more, injects a decidedly dour origin for the young woman who eventually becomes Cruella, setting up a pathway of redemption that not only feels unearned but is also profoundly unsuccessful. 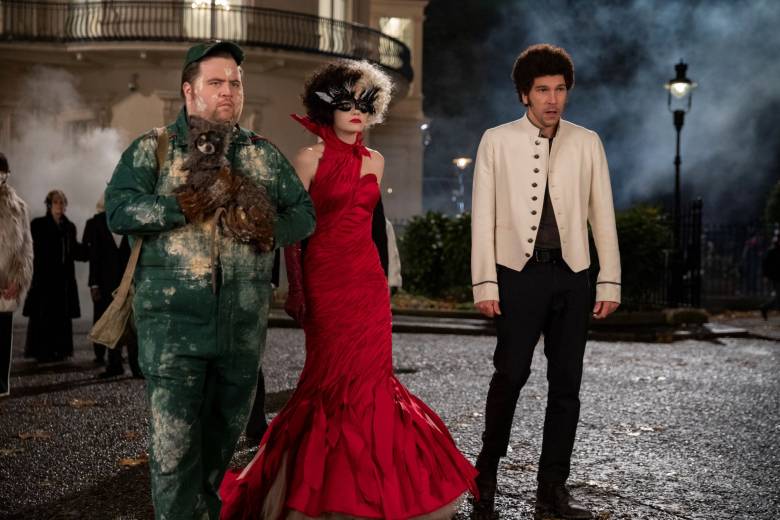 Casting Emma’s Stone and Thompson in your film – both Oscar-winning actresses – goes a long way to overcoming your story’s shortcomings, and while Thompson acquits herself with the same sneering, swirling antagonism Nicole Kidman displayed in the first Paddington movie, poor Ms Stone is encumbered with a lacklustre, formless character arc and unenviable directorial choices in trying to make Estella, nay Cruella, feel fully fleshed out. The idea of turning Cruella into something more than a simplistic cartoon villain out for puppyskins needed some heart and soul, and at a superficial level the screenwriters endeavoured to achieve this; unfortunately, the combination of Stone’s effortless screen charisma and an unrestrained production budget doesn’t come together with the “movie magic” Disney were expecting. Estella’s backstory, with her adopted mother’s untimely murder spurring the young girl to chase her dreams in London and become a fashion designer, isn’t very well executed by the writers or director Gillespie, who slathers this film with maudlin, mortuary-like colour schemes and drab studio-bound design work. It’s a vague pastiche of Danny Elfman’s aesthetic diluted through a Paddington-style fantasy world, with a child-like gormlessness lacking bite or any sense of glee, as if the whole show recognised their mistake midway through filming and just let the train cruise through the station unattended. 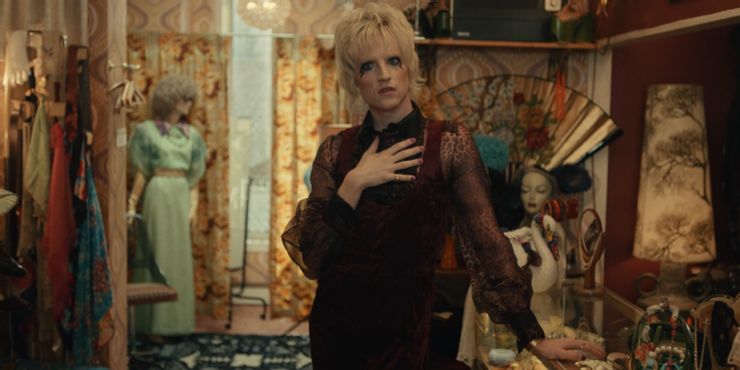 Moments of colour, such as Cruella’s public debut at one of the Baroness’s fashion shows, are momentary diversions in what turns out to be quite a dour movie; Disney films are meant to inspire, feel fun or exciting, or contain some element of entertainment, yet despite Stone’s game performance the film’s frigid veneer of overly produced visuals and step-by-step story points (some of which I could guess, a few of which did surprise) is inescapably dull. For a film so bustling with colourful characters and set within a fantasy-lite London, that Gillespie smears the screen with grey, black and brown colour mush so often really does the story a disservice. I know, I feel such a hypocrite when I scroll down the highly contrasting images uploaded to this review, but the film is given a far more desaturated look in the 4K Disney+ stream available to me. Cinematographer Nicolas Karakatsanis’s camerawork is a delight but the film’s obvious green-screen work and ropey digital animal effects leave a lot to be desired, mitigating a lot of the pageantry he aspired to showcase. Costume design and set design are perhaps the film’s biggest highlights, although for a story cantered around high fashion a lot of the featured gowns and couture lacked any oomph. Stone, parading about in her various dresses, is obviously a star and can make even the most ragged cloth look positively boutique, but everyone else kinda merges into a bland, blurry mixture of suits and formless background material lacking the pop or pizazz you crave. 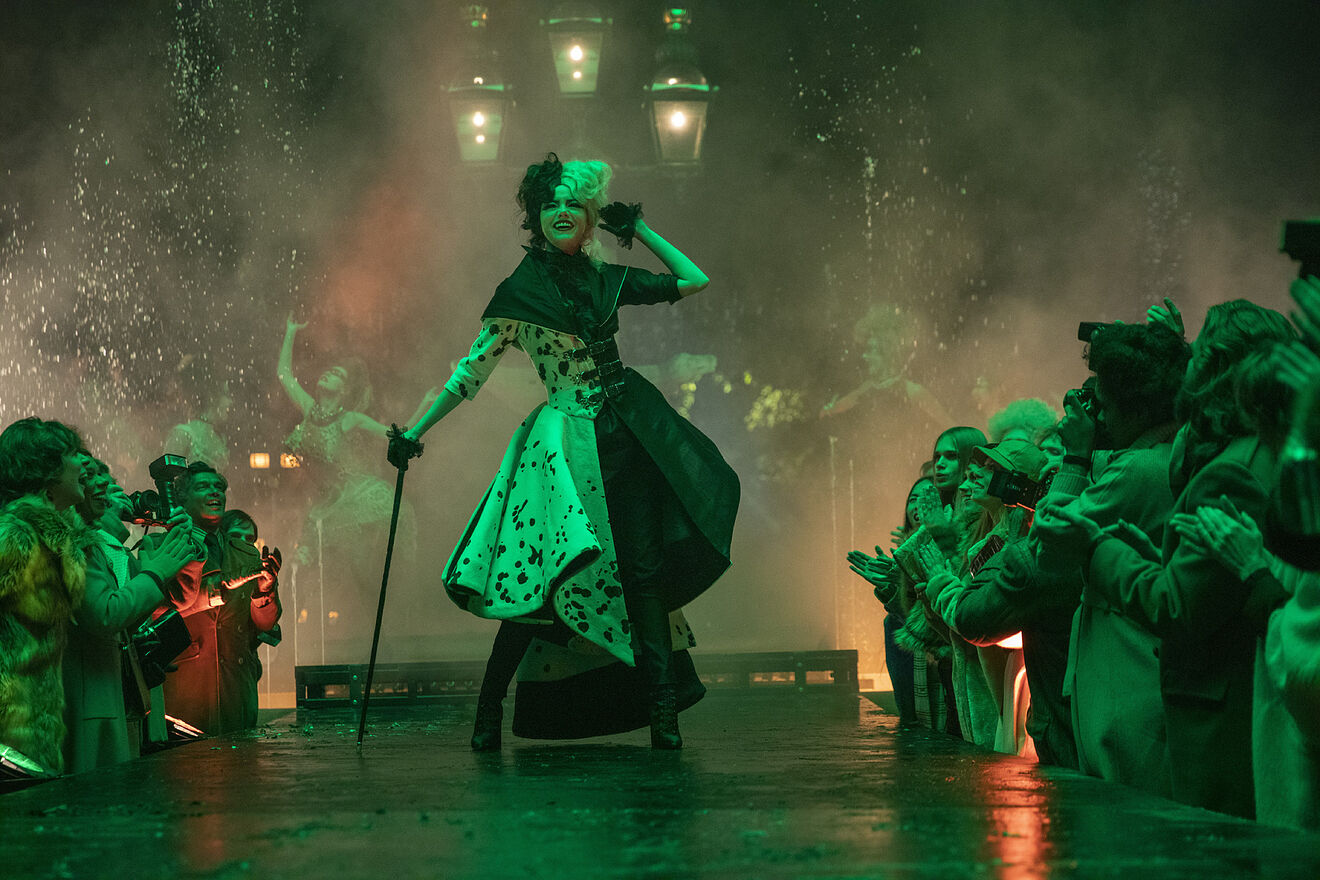 And it’s so long! Cruella clocks in well over the two hour mark, and there’s absolutely no reason for this at all. Had Cruella herself had better or more defined development in terms of her character arc, something that is murky at best, you might justify a near two-and-a-half-hour movie. Cruella cannot justify its own length, parlaying “look how many references to the original story and film we have” into protracted inane angst and reductive production value and falling well short of a being a film that maximises its time in your company through storytelling. A lot of the film’s excess could have been trimmed back to focus on Estella’s bipolar disorder and her treatment of her friends, which could have turned the film into a pleasant enough buddy-heist film that worked. Joel Fry and Paul Walter Hauser try their darndest to play the bumbling yet earnest sidekick roles with some kind of nuance and truth to the script’s demands, and they make a solid fist of it. They’re hindered, however, by a director unsure of what do do with them thematically, and the film’s multi-million-dollar focus on Emma Stone’s role, which is what people have paid to see. That the film spends a great deal of time in Estella’s company and achieves so little is robbery of the most daylight order. 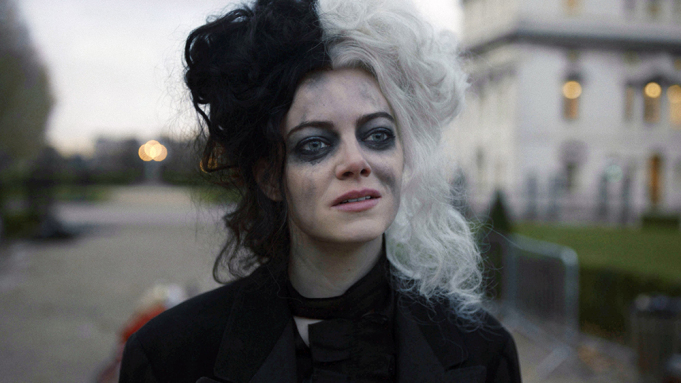 Off the back of Maleficent and now Cruella, you could be forgiven for thinking Disney might have been trying to develop its own Cinematic Villain Universe of some kind. Rational people might ask exactly why a second-tier Disney villain gets her own hero story in live action – I think the opportunity to showcase Emma Stone’s acting chops is almost worth this pain – and Cruella’s stridently antisocial visual style, together with inert editorial choices and flaccid secondary character development would indict itself in the court of misadventure quite surely. But there’s obviously an audience for this: at the time of writing, Stone has signed up for a sequel, with both director Craig Gillespie and writer Dana Fox tapped to return as well, while the film’s generally positive critical reception give Disney hope a sequel in a post-pandemic era might fare much better. I found Cruella tough going, though, for nothing else than the story didn’t work for me, the point was lost amidst the “aren’t we clever” showmanship, and the supporting characters rarely deliver either the laughs or the pathos the film so urgently needs. Worth a look for both Emma Stone and Emma Thompson for sure, but Cruella is a fake fur coat of a film, and hardly worth the trouble.