I’m not going to sugar-coat this: Disney’s live-action remake of their 1998 animated film Mulan has a lot of issues, the least of which is typical of Hollywood trying to do an Asian-based feature film and making something both astoundingly beautiful visually and diabolically dispiriting narratively. It’s a film caught between two distinct worlds – the flourishing wuxia-heavy fantasies renowned by fans of Asian cinema, and the simplistic requirements of pandering to an American audience – and, sadly, Mulan’s second big-screen outing fails to live up to the hype and nostalgic pangs of its animated progenitor. 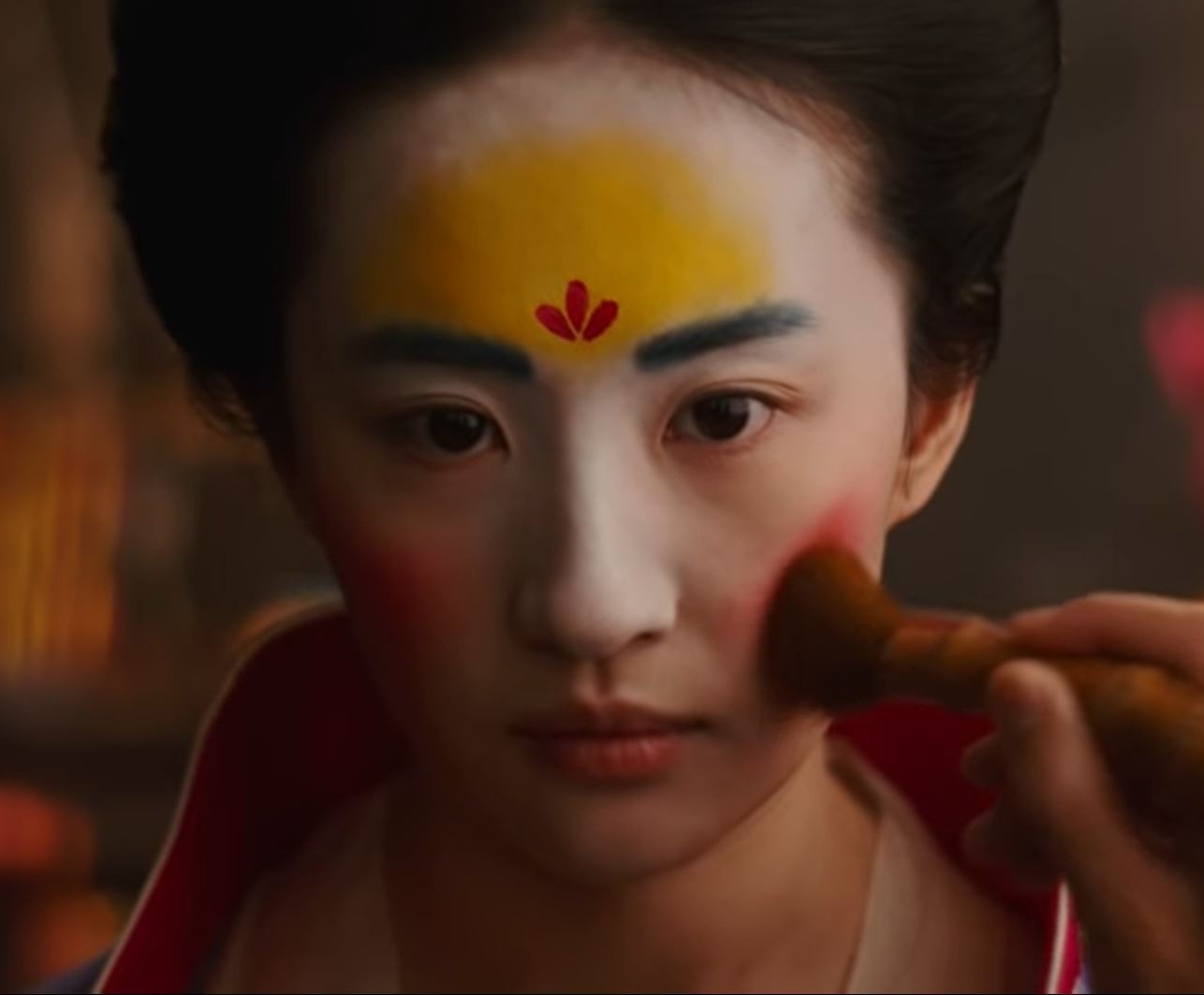 In rural Imperial China, young Hua Mulan (Liu Yifei – The Forbidden Kingdom) lives with her sister (Xana Tang), mother (Roaslind Chao – The Joy Luck Club) and war veteran father (Tzi Ma – Rush Hour, Arrival, Skyscraper), when duty comes calling in the form of conscription: the Emperor (Jet Li – The Expendables) has commanded one male member of each family to join the army in fighting rising rebel warrior Bori Khan (Jason Scott Lee – The Jungle Book) and his marauding band. Khan is aided by a powerful witch, Xianniang (Gong Li – Memoirs of A Geisha, Miami Vice), who possesses the ability to transform into various creatures and avatars. With her father crippled by past wounds, Mulan pretends to be a male and joins the patriarchal military to spare her father almost certain death, and ends up forming close bonds with members of her battalion, notably Commander Tung (Donnie Yen – Rogue One: A Star Wars Story, Ip Man) and fellow recruit Chen Honghui (Yoson An – Mortal Engines). Together they take the fight to Khan and attempt to save the country. 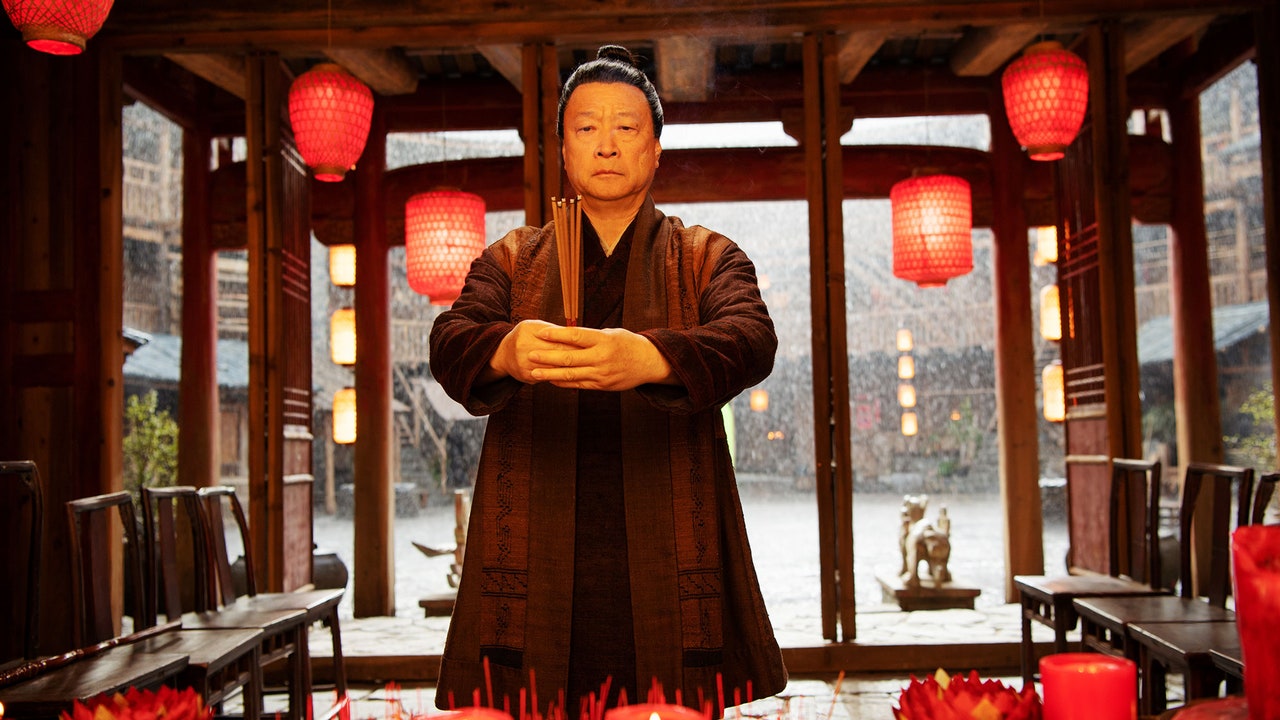 Directed by Niki Caro (Whale Rider), the 2020 remake of Mulan strips away the sweet-natured comic relief of the animated version – notably, Eddie Murphy’s miniature dragon Mushu, is entirely absent – and all of the songs (although hints of the animated film’s musical motifs are present thanks to Harry Gregson-Williams’ lovely score) to deliver a visually sumptuous yet emotional shallow affair that follows the story we all know closely enough, yet with just enough differences to stand alone. Written by Rick Jaffa, Amanda Silver, Lauren Hynek and Elizabeth Martin, this quartet of scribes have flattened out the uniquely Chinese folk heroine to a terribly sanitised, too easily palatable version of what could have been a far more emotionally weighty story. Disney’s proclivity to simplify has reduced Mulan to a flashy Chinese superhero, which works well in this girl-power era but less well when you consider how cheap and effortful her arc feels in retrospect. Take nothing away from the original animated Disney film, which has the benefit of three decades of nostalgia working in its favour, but the 2020 edition feels… I don’t know, thinner, less culturally astute than it ought, somehow? 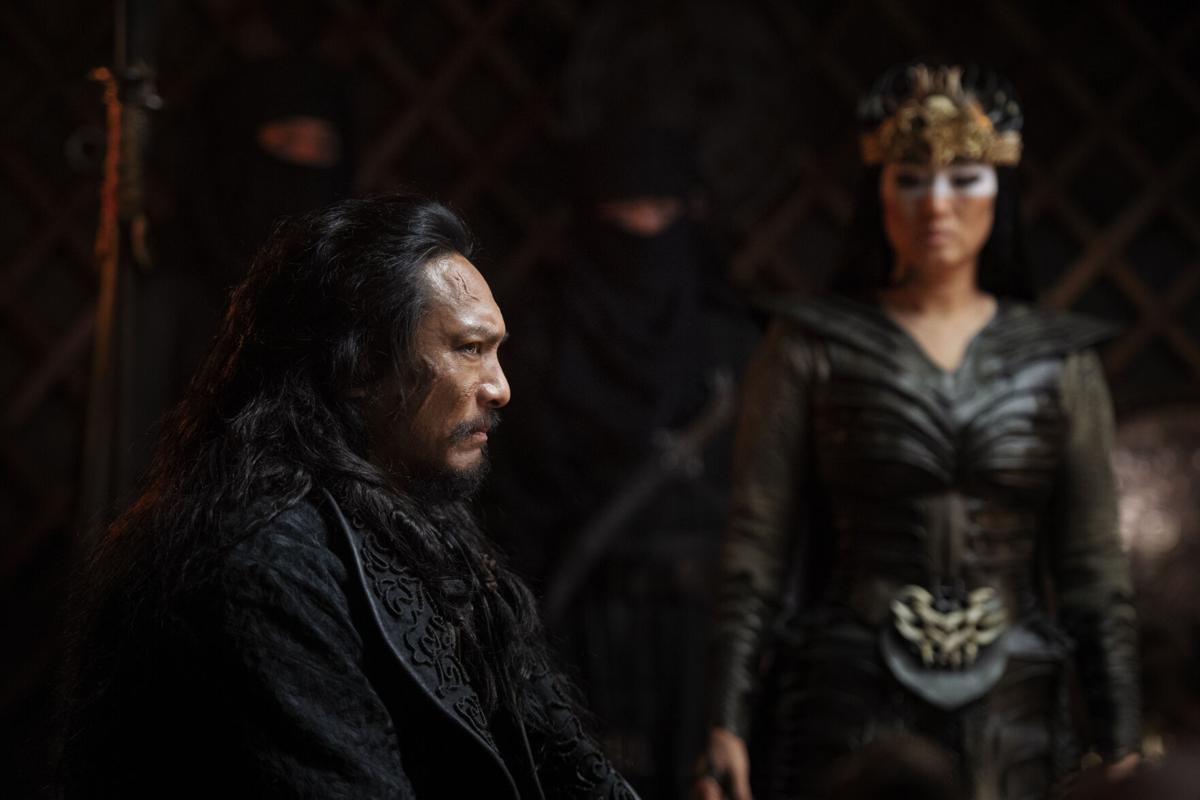 One of the problems (other than the removal of the classic songs) is that it tries to turn Mulan into an Avengers-lite superstar. Fair play to the film and Caro’s direction that she achieves this relatively well from a visual standpoint, but the story’s undercurrent of a girl rising up against a known patriarchal society and affecting actual social change isn’t given enough heft by the pretty-coloured photography and racially shortchanged characters. That the film gives Mulan “chi” to help her in battle – a power akin to The Force, by the looks – robs her journey of its own power; a weak, powerless female changing hearts and minds of her all-male military brethren works in the animated film because she’s just that – a normal person – but with the ability to fly, spin-kick spears in mid-air and basically defy gravity (something fans of wuxia will be familiar with) the power of her story is reduced to being merely a tokenistic gimmick.

Don’t get me wrong; the Crouching Tiger Hidden Mulan aspect of the film is utterly glorious in its own right, and the stunt-work and action sequences flow with the kind of sublime visual syrup of classic works of the genre, and having notable martial arts veterans like Donnie Yen and (a wasted) Jet Li in your cast invites excitement, but it all feels so homogeneous, so diluted from actual Chinese cultural motifs you kinda cringe watching it. Elements of Chinese mythology and folklore are injected into Mulan’s storyline, and the notion of bringing honour to your family, a concept not alien to Western cinema audiences through decades of exposure to similar themes from the region, is hammered just a touch too hard for my liking here despite being true-to-life. Caro brings a unique visual tone to the film, mixing traditional Asian cinematic flair with a distinctly Americanised sensibility – the director herself is from New Zealand, which makes the choice for her to steer this one puzzling at the very least – and at times generates some excitement with her flashy editing and widescreen framing and camerawork. But grandiose tracking shots and action-centric editing amount to nothing if we feel nought for the central character: poor Yifei Liu looks somewhat stuck trying to convey the intrinsic femininity mired in a society that favours the masculine at the expense of logic and reason, and although certainly proving she has the physicality to carry the role, isn’t given enough depth to work with as a character, rather than as a figure of romanticised myth. This might have worked in an animated movie, but in live-action I guess I demand more.

The film also has trouble balancing the supporting roles around Mulan as well. On the one side, Tzi Ma’s role as Mulan’s father, Hua Zhou, is fantastic and the actor has a genuine chemistry with his on-screen daughter, such that their scenes together were the most meaningful and emotionally impactful of the film. On the other side, the watered-down band-of-brothers recruits who befriend Mulan in the army lack any kind of through-line, backstory or interesting element: in the animated film, each of Mulan’s friends had a distinct personality, whilst here they’re consigned to silly slapstick, indifferent exposition and wild gesticulation, or, in the case of Yoson An’s utterly bland Chen Honghui, being seemingly charisma free for the entirety of the movie. Screen legend Gong Li looks to have a great time as the film’s arch-villain, the witch Xianniang, alongside the scowling and scarred Jason Scott Lee as Khan, whilst Jet Li, as the Chinese Emperor, is nigh unrecognisable and completely wasted in the role. Donnie Yen has the role of Commander Tung bulked up considerably for an actor of his calibre, and although still not given enough to do other than glower, glare and rumble through his character’s misogyny, his sheer screen presence is enough to carry the day. 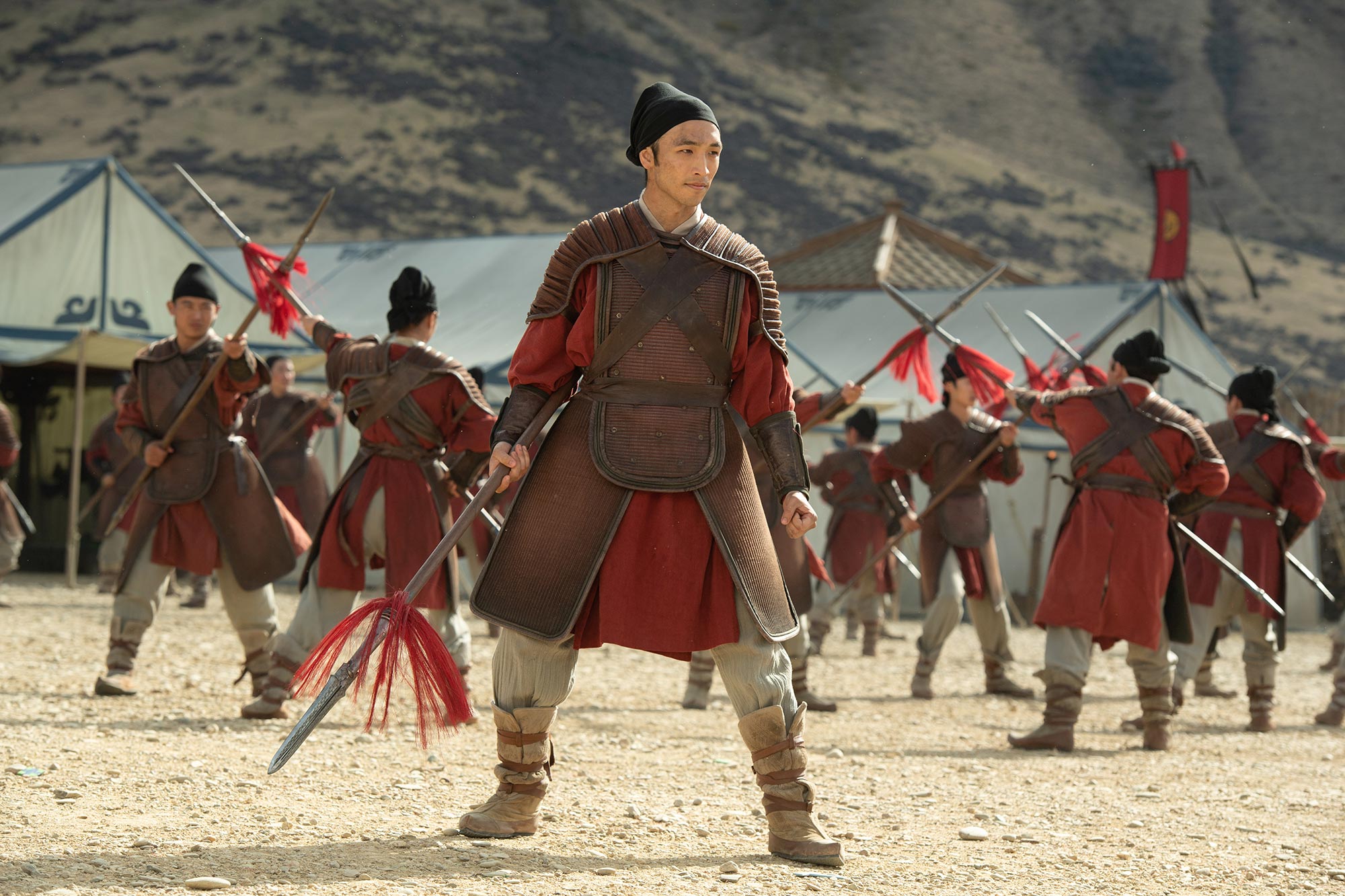 Almost saving the day with Mulan is the Gregson-Williams score, which taps into themes of the animated film’s songs – notably “I’ll Make A Man Out of You” and “Honour To Us All”, although the others might have been hidden in there too, which I’ll hopefully pick up on future rewatches – and the film’s visual effects, which range from marvellous to spectacular. There’s a postcard beauty to almost every frame of this crisply shot movie, reputedly with a budget in excess of $US200m, and you can literally hear the prestige coming out of the screen it’s all so earnestly mounted. Niki Caro may not have been Disney’s first choice for director here – they reportedly wanted an Asian helmer, and even approached Ang Lee for the job – but she acquits herself superbly at a visual level in every regard. Unfortunately, the indifferent screenplay and the studio’s decision to film the movie for American audiences to understand, rather than really dig into a legitimate Asian take on a culturally significant mythology, sinks things quite quickly. 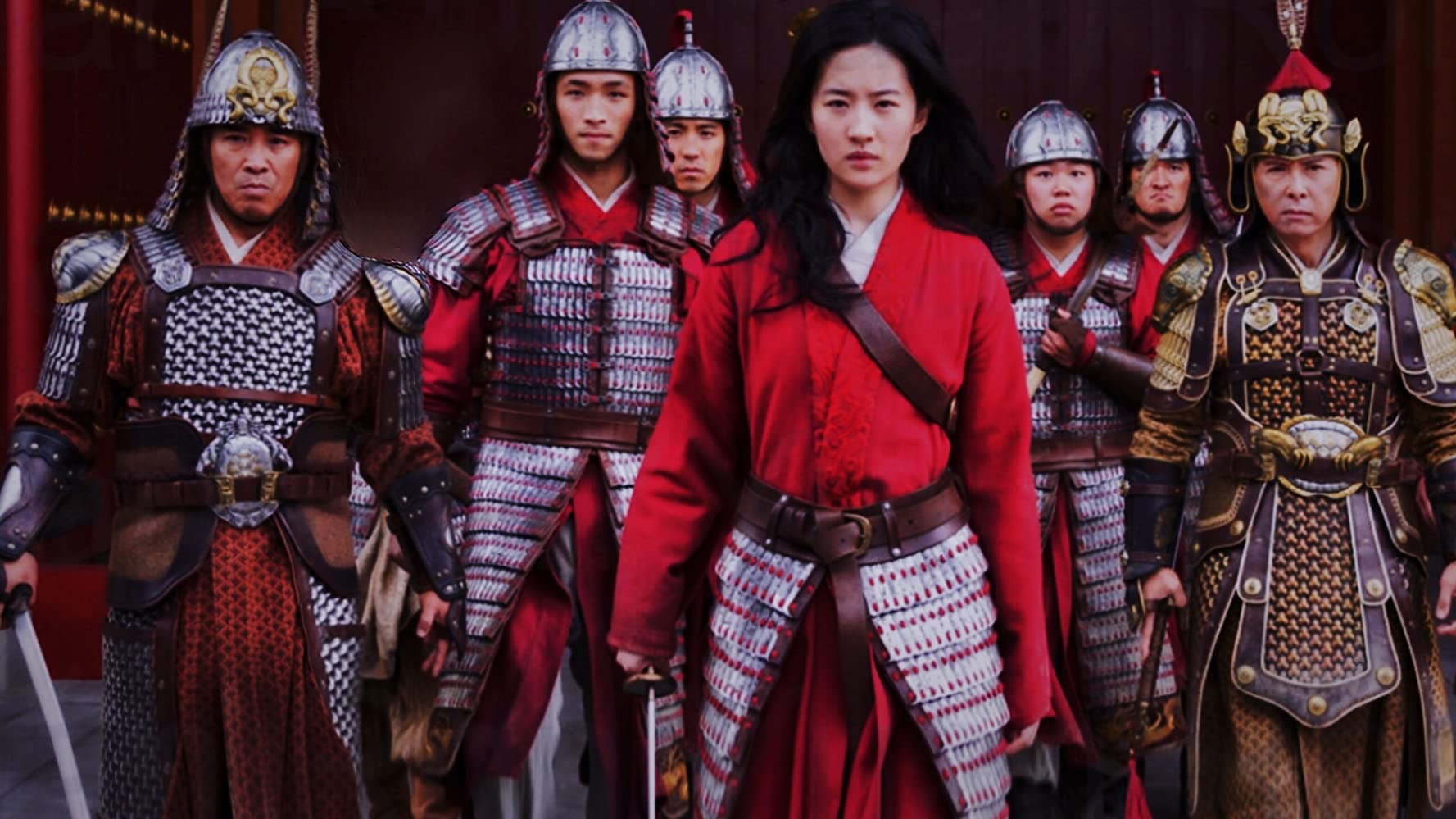 Mulan is a superficial “girl power” take that looks great and showcases its magnificent Asian-ethnic cast superbly, but when dissected flies apart at the seams. An argument that it’s based on an already simplified animated film doesn’t hold water in this post-millennial era when we demand more from our storytellers, and the script’s inability to really generate more than a superheroic adoration of its central character and delve into the cultural issues of the time and how they mirror current mores does the property a greater disservice than simply removing all the songs.