A soulless cash-grab by Disney to make profit off nostalgic Gen-Xers and a debacle of design and confused motivations, Guy Ritchie’s horrendous sledgehammer tactics bring this remake of the 1992 animated classic, Aladdin, to gargantuan, tone-deaf life. Garbled character development, a preponderance of superficiality and an awful “new” Politically Correct Female Empowerment Song (sung by poor Naomi Scott as Jasmine) run roughshod over the freewheeling joy of Disney’s original gem, with the most egregious decision being that of casting Will Smith in the central role of the Genie. Smith ain’t no Robin Williams (and who ever could be, really?) but his rancid “rapping” and the generally poor elicitation of the blue-hued magical maestro will leave a very bad taste in the mouths of those hoping at least some of Ron Clements and John Musker’s dynamic original take will transcend the mediocrity on display. 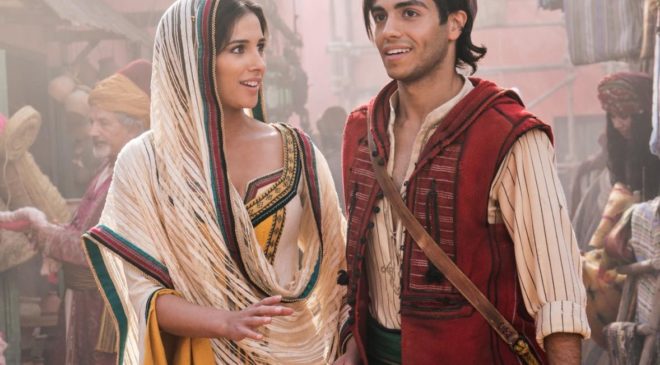 Aladdin (Mena Massoud) is a young street thief in the Arabian city of Agrabah, ruled over by the benevolent Sultan (Navid Negahban) and his daughter, the beautiful Princes Jasmine (Naomi Scott). After a chance meeting, Aladdin falls for the Princess, but is ensnared in the machinations of the Sultan’s chief adviser, Jafar (Marwan Kenzari), a man who craves power all of his own, and seeks a mysterious lamp from a distant Cave of Wonders (voiced by Frank Welker, reprising the same roles from the animated movie). Inside the lamp, a wondrous and all-powerful Genie (Will Smith) who grants the rubee three wishes: wishes Aladdin can use to get into Jasmine’s boudoir. Aladdin is, as always, assisted by his streetwise monkey Abu and a sentient magic carpet, while Jaraf is aided by his scallywag parrot Iago (Alan Tudyk). 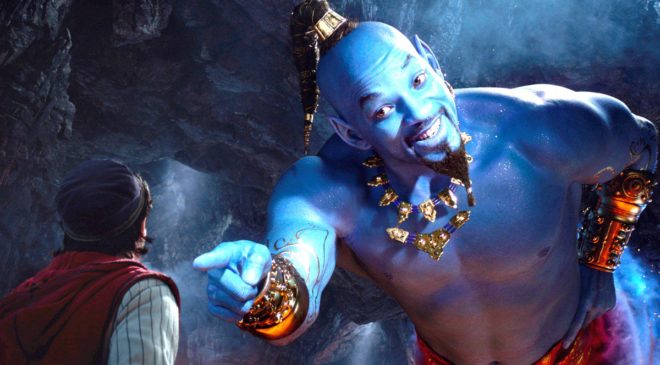 Nearly every piece of Ritchie’s Aladdin is eye-gougingly awful. Nearly. On the very small plus side: the starring roles of Mena Massoud and Naomi Scott as Aladdin and Jasmine respectively, who are literally gorgeous and have a chemistry as close as humanly possible to the characters of the animated movie. There’s also the soaring majesty of Alan Menken’s music and the re-purposing of the animated film’s original songs – notably, “One Jump Ahead”, “Prince Ali” and a most enthusiastic rendition of “A Whole New World” – with several minor lyrical expansions, all of which tap into that foot-tapping sense of nostalgia people like me who grew up with the animated film will find humming along to. Sadly, that’s about the only good stuff 2019’s Aladdin has going for it, because the rest of the film is a hailstorm of shit revolving around a director better known for reducing Sherlock Holmes to a slo-mo orgy and King Arthur to some kind of prehistoric superhero. 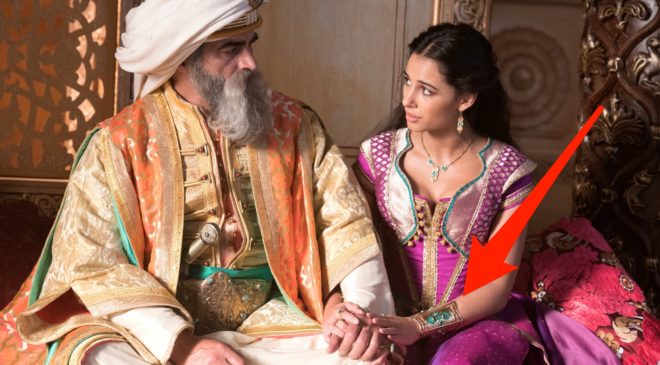 It’s a film desperate to prove a point, although exactly what that point is nobody behind the camera appears aware, for Aladdin not only copies the animated film wholesale (and even, if you can believe it, removes a lot of the 1992 film’s best lines and tricks) but attempts to (badly) expand on beloved characters and concepts to the overall detriment of everyone involved. Two of the animated film’s most loved characters are Iago and Abu, tricksy sidekicks whose status as classic Disney ensemble players has only grown since their inception; in Guy Ritchie’s film, they’re generic, lifeless CG abominations, with Iago in particular resembling some kind of desiccated flying feathered corpse than a real life bird, while the decision to remove all sense of life and love from Abu and turn him into a creepy skeletal-shaped bag of fur simply beggars comprehension. Key moments of the ’92 film are given epic widescreen treatment – the Cave Of Wonders is hardly wondrous, slathered in darkness and a complete lack of foreboding, whilst the Genie’s attempt to turn Aladdin into a Prince offers scant laughs; in contrast to the “A Whole New World” number, which lifts the film from its miry dreariness to actually hit a solid high note – with vivid, technicolor digitalisation, thanks to Alan Stewart’s gorgeous cinematography, but they all feel too disingenuous. 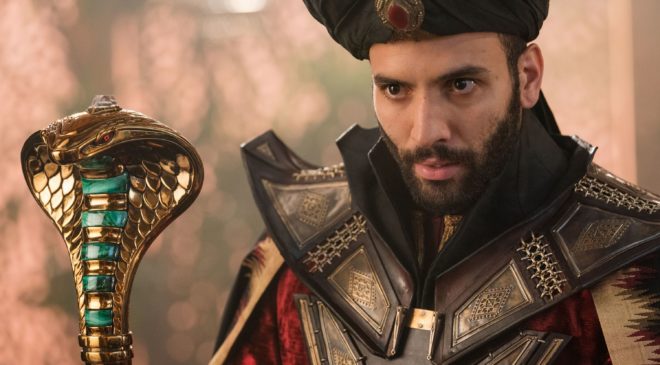 In trying too hard to copy the original film and give willing audiences what they think they crave, the production never carves its own path or takes liberties enough to warrant serious inspection. It’s a live-action film trading off a far better, and more succinct storytelling methodology and Guy Ritchie isn’t strong enough a director to really dig into what made the ’92 Aladdin so terrific. The film flounders badly, ponderously stepping from one nostalgia button to the next as it shoehorns in ill-advised subplots (ever wanted to see the Genie having a boner for one of Jasmine’s handmaidens? Puh-lease!) and even worse – shitty songwriting – to pad out the running time. The fact that Aladdin clocks in at a bladder-bursting 2 hours and feels like it’s been going for four is testament to just how jumbled and incoherent the film is. It never finds fluid motivation for either Aladdin or Jasmine: Mena Massoud makes a terrific Aladdin work as well as he can, but at no point do you ever get that “smartass” vibe or sense of personal growth as a person that you did in the animated version. And Jasmine, with corporate behemoth Disney trying to pitch her to modern audiences, intends on ramming that female empowerment component down our throats so much you’ll choke: have you fuckers even seen the ’92 film, because Jasmine wasn’t a wilting flower in that, but sure as shit she didn’t need to sing a tone-deaf song entitled “Speechless” to mitigate the cultural norms of the film in which she appears. 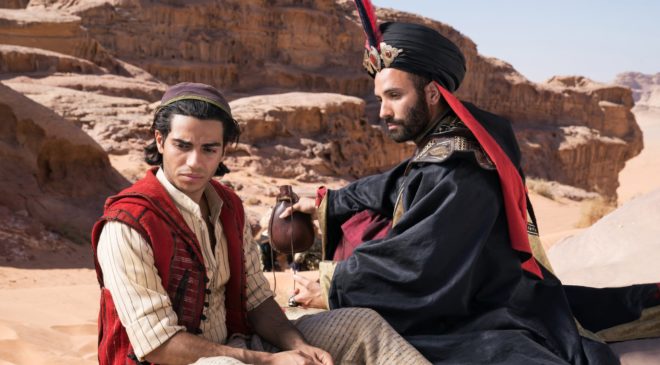 Naomi Scott is lustrously beautiful, and more than holds her own in the key role she’s given, but is surrounded by clumsy, halfwitted filmmaking and some lazy, stultifying screenwriting in trying to make her more… I don’t know, energetic? Half the fun of the animated film was her wily feminine allure as a strong-willed and independent daughter of the Sultan, and her chemistry with Aladdin, but it’s as if Guy Ritchie and Disney think that they need to actually overtly make a point of making this a prominent story hook. Poor Marwan Kenzari does a reasonable job trying to give Jafar, one of Disney’s blue ribbon villains, a sense of showmanship and panache, but the actor isn’t strong enough or filled with enough charisma to translate that onto the screen to make the part work. In the animated film, Jafar was a badass. In this version? He’s a whiny little bitch. The fact that Disney went and cast a boatload of actors of Middle Eastern descent to play the parts is a strong positive, but then the studio went and screwed it all up by putting Will farking Smith front and centre as the Genie. 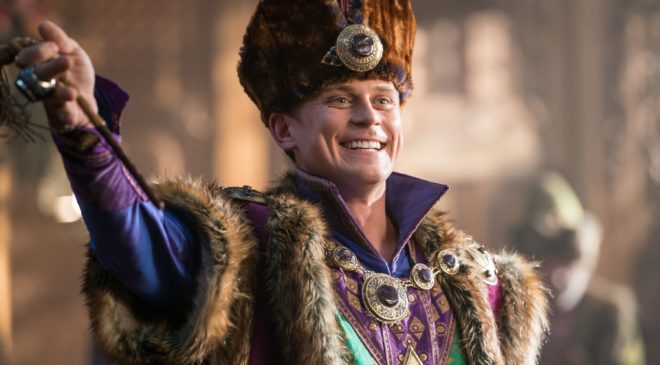 Let’s be real here: Will Smith is a really bad choice for the Genie. I was fully prepared to give him the benefit of the doubt, but the whole way through his every appearance in the blue hue I kept thinking it felt… off somehow. The digital trickery used to bring him to life is flaccid, ill-suited and ultimately lacking in charm, whilst Smith himself appears awkward and ill-fitted into Robin Williams’ enormous comedic shoes. Smith dabbles in riffing the Genie’s best lines, but the elasticity of the original film’s animation and Williams’ verbal virtuosity are well out his reach: the Genie’s title song, “Friend Like Me”, features some truly cringeworthy lyric delivery and even worse CG effects to accompany them. Smith can’t sing, either, at least in a manner congruent with the professionalism of the rest of the Disney mandate, and his awful, heinous closing credits track (“Yo, it’s Will Smith and DJ Kahhhhhled” he cries as the scrolling begins, because what rapper can’t announce himself over his own songs…) has to be heard to be believed. I rarely say this about anyone appearing in a film, but Will Smith’s turn as the Genie is easily the worst casting decision of this century in a mainstream Hollywood film. He’s awful in this. Truly, unbelievably, awful. 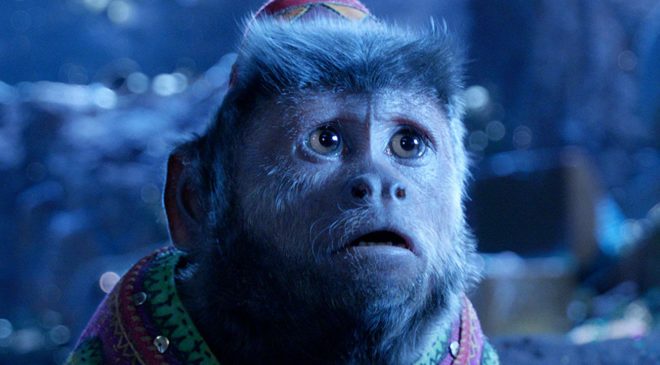 Aladdin is a trainwreck. Alan Menken should be ashamed to have his name on this shit. Hell, everyone involved should be ashamed, none moreso than Guy Ritchie, who turns up the testosterone-fuelled directorial style to eleven as he attempts to turn this property into some kind of magical action movie. In doing so, he loses sight of that which made the original Aladdin great. A sense of fun and well-developed characters, albeit animated ones, who grew and developed throughout their own film. Here, that growth and development is a shambles, a shoddy product of Disney eyeing box office returns instead of creative ingenuity. Nobody here is allowed to step outside the established canon even for a moment, more’s the pity. A live-action turn at Aladdin should have maybe had less depressing Blue Man Will Smith and more sinister presence or delightfully sugary romance. This film, as much as it’s raked in the dollars by complacent and complicit audiences, is a pile of stinking garbage, and should be treated as such by fans of Disney’s original masterpiece.