Principal Voice Cast : Jamie Foxx, Tina Fey, Graham Norton, Rachel House, Alice Braga, Richard Ayoade, hylicia Rashad, Donnell Rawlings, Questlove, Angela Bassett, Daveed Diggs, Wes Studi, Fortune Feimster, Zenobia Shroff.
Synopsis: A musician who has lost his passion for music is transported out of his body and must find his way back with the help of an infant soul learning about herself.

Undisputed masters of computer animation, Pixar continues to push boundaries and challenge audiences with their incredible storytelling and sublime animation style. Soul, the latest from director Pete Docter (Monsters Inc, Up and Inside Out) will find its audience just as challenged intellectually whilst finding plenty of stimulation aurally and visually. A meditation on life, death, fate and purpose, Soul is thematically darker than any Pixar film before it and may find an uneven emotional response from younger viewers, but is rewarding in ways you won’t expect from an animated movie. 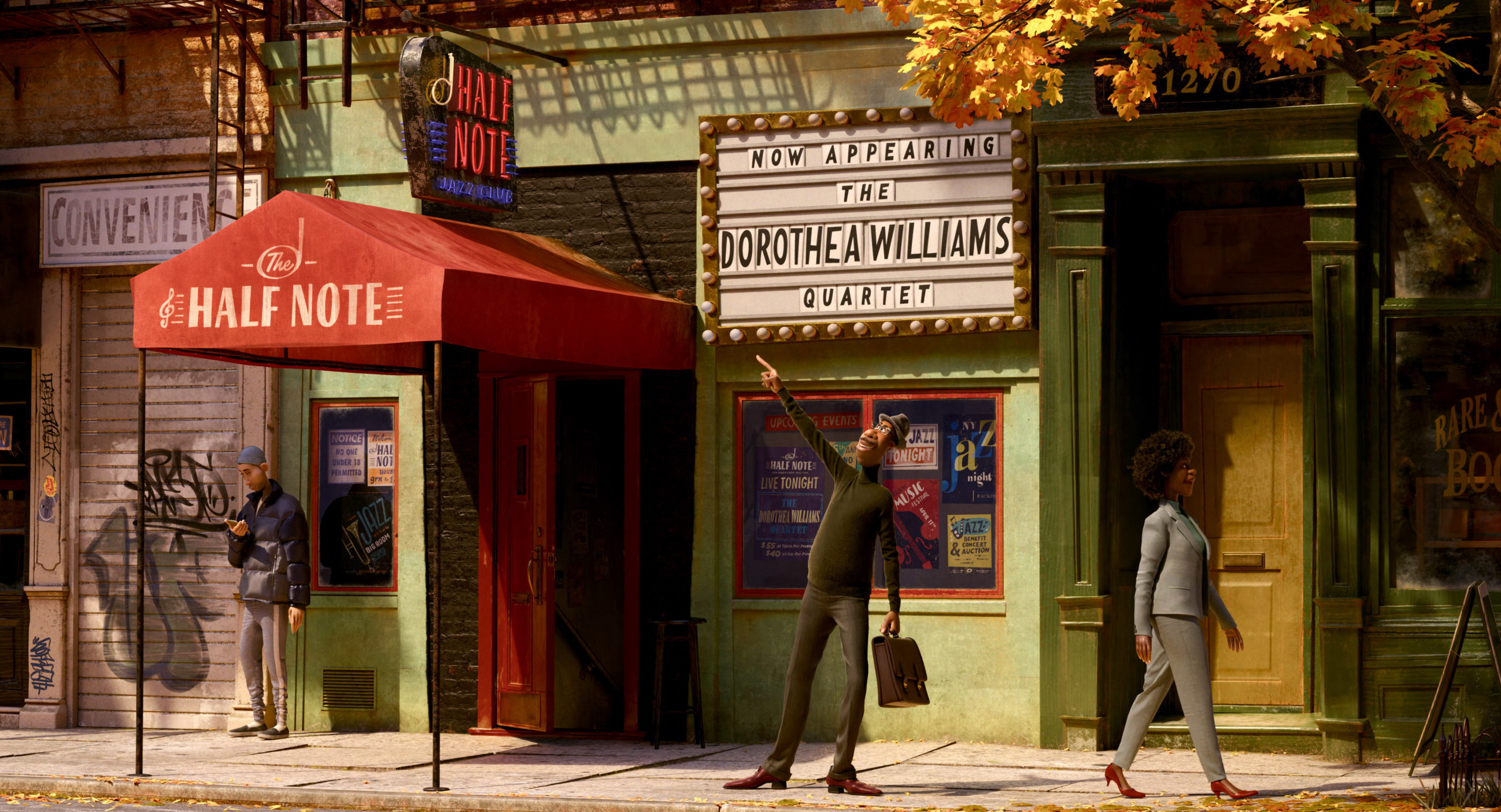 Aspiring jazz pianist Joe Gardener (Jamie Foxx) teaches middle school music to an uninspired class, dreaming of playing with famous musician Dorothea Williams (Angela Bassett) although knowing that dream is out of reach. However, when he is unexpectedly offered a chance to play, his excitement causes him to fall down a sewer drain and die. Transported to the Great Beyond, Joe refuses to accept death before grabbing his opportunity, and ends up finding his way to the Great Before, where new souls are loaded up with personality before being sent down to Earth. There, he meets soul 22 (Tina Fey), who desires nothing more than to remain in the Before, much to the chagrin of the soul counsellors named Jerry (Alica Braga, Richard Ayoade, Rachel House). Joe is teamed up with 22 to find her a purpose, and arriving on Earth they are startled to discover Joe has landed in the body of a cat, whilst 22 has landed in the body of… Joe! 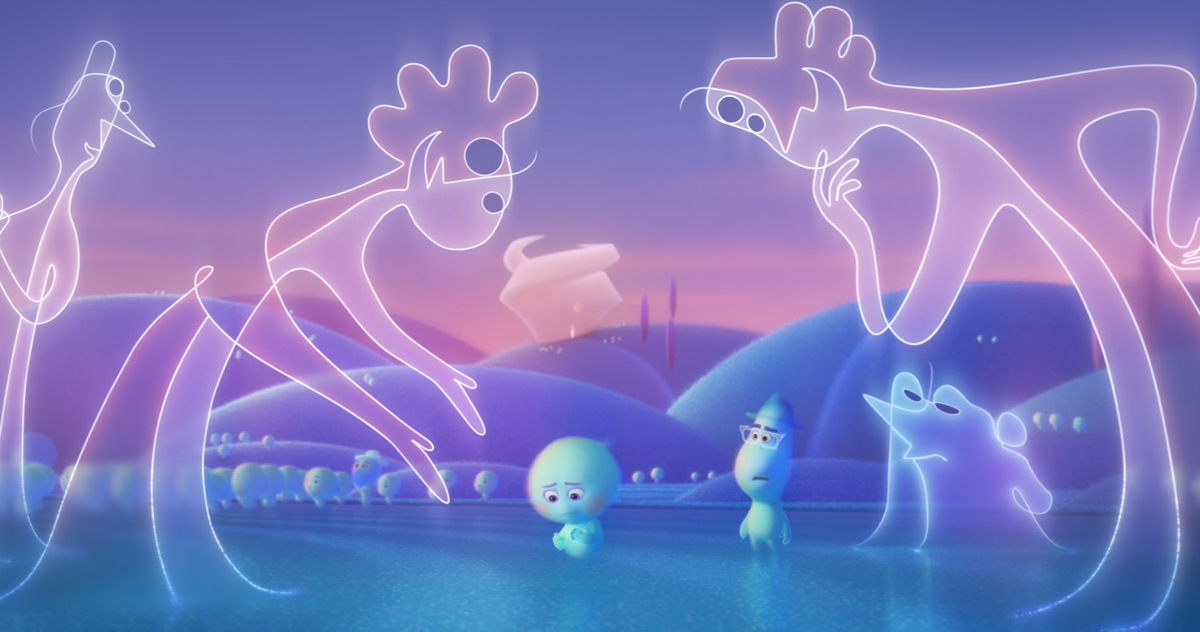 Soul is absolutely breathtaking. It has depth, genuine emotional weight and beautiful performances to accompany the gorgeous animation on display here, easily surpassing the tear-jerking Inside Out for powerful storytelling, which is saying a lot. Where Inside Out was a lovely look at human emotion and moving from childhood to adulthood, Soul takes us into themes of death and what makes us human. Okay, that doesn’t sound family friendly, but through the Pixar lens the plot is given a fantastical otherworldliness to mitigate potential pitfalls for younger audiences. Kids often ask about death and dying, the huge metaphysical philosophical conversations parents often dread, and this film ruminates on how the afterlife (and beforelife, for that matter) works in an incredibly stylish visual aesthetic. Written by Docter, Mike Jones and Kemp Powers, Soul’s incredibly clever take on this kind of material will challenge some of its viewers to question their own purpose. It asks hard questions without seeming to, teasing out meaningful conversations about what makes a person a person, what constitutes a soul, and are we predestined to be a certain way from birth or not. If nothing else, Soul may cause some healthy discussion around the loungeroom (it debuted on Disney+ after a brief entrance into selected cinemas due to the Covid-19 pandemic) and that is perhaps the film’s greatest asset. 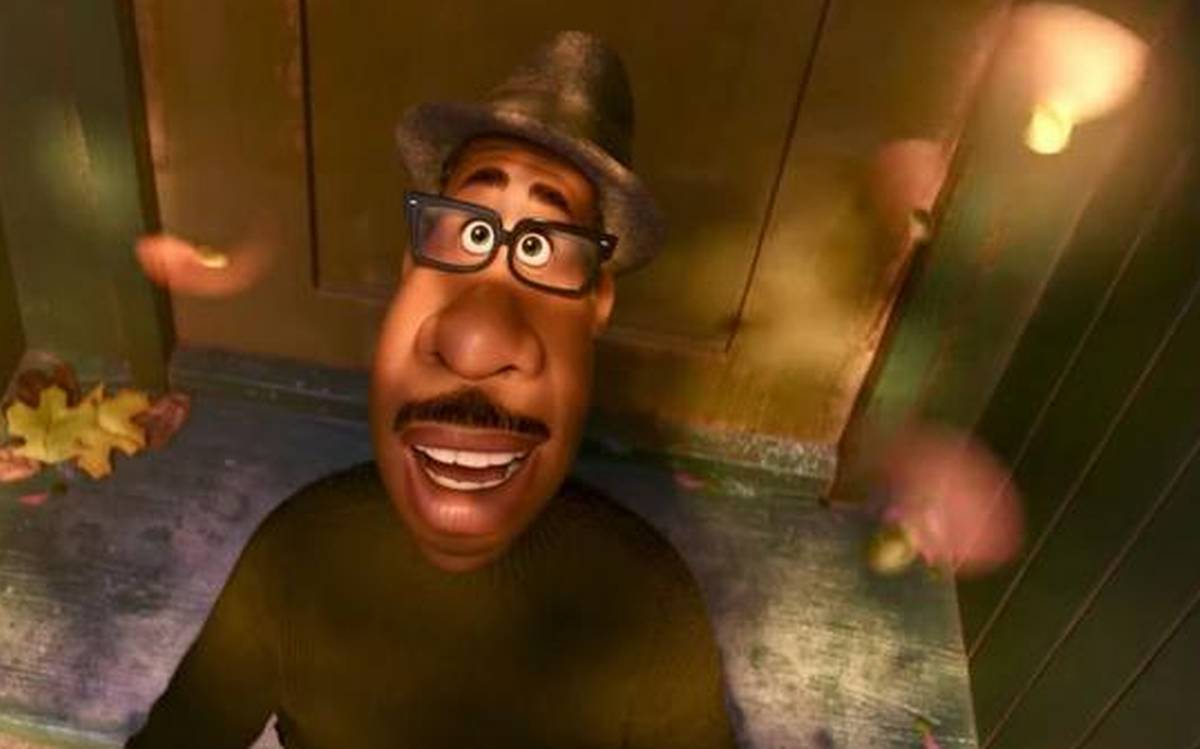 Arguably the strength of the film – aside from the writing – is the performances, led by Jamie Foxx and Tina Fey. As Joe and 22 respectively, their characters are nuanced and layered with multifaceted personality traits giving them aspirations and desires that allow their respective arcs to linger for the audience. Joe, as a musician, has a love of jazz and the film plays hard on this aspect, whilst 22 doesn’t know what to believe, love or enjoy which makes her a perfect foil for the hugely emotional musician. Foxx is practically unrecognisable as Joe (I didn’t realise it was him until the credits, I’m usually spot on with who’s who in these things!), masterfully underplaying the passion and desires of Joe’s musical career with a paternal spark towards the eccentric and anti-social 22. Fey, for her part, could easily have played 22 as a bit of a dick, and the character has vague similarities with Wreck It Ralph’s Vanellope in terms of attitude which makes her constant clashing with Joe a delight to experience, but to her credit (and that of the directorial selections) Fey’s work gives 22 a width of experience and development that make her an empathetic identity indeed. 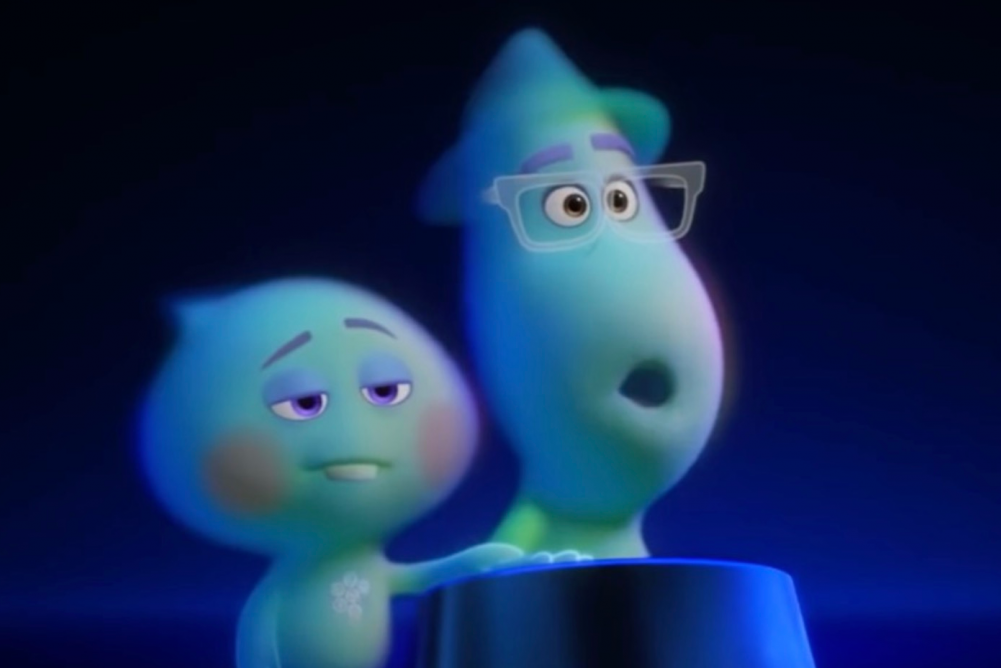 Talk show host Graham Norton has a blast playing a bohemian spirit guide existing in both the Earthly and spiritual planes, having some great comedic moments amidst what might have been abject black dramatic moments. Supporting roles to Angela Bassett as the iconic musician Joe fantasises about playing jazz with, Fresh Prince of Bel Air’s Phylicia Rashad as Joe’s mother Libba, and Rachel House as a Great Beyond “soul accountant” sent to return the recalcitrant Joe to the afterlife, are kooky and fun, and as with every Pixar film to-date the performances are absolutely pitch perfect.

As with every project the studio puts out the animation is yet another benchmark-setting step ahead of everyone else. The detail and realism involved here is mind-blowing, soft and subtle when required but bursting with inventiveness and ingenuity at every moment. In some moments, Soul looks positively photoreal. Yet for all its attention to pixel perfection, the film retains that unmistakable Pixar feel, the designs of the characters especially looking like the imaginative cousins of those from other films. Docter uses a widescreen frame for Soul that invites dynamic shot design and storytelling prowess, the animators utilising the ratio with precision to enhance and explore the heady themes the script demands. Sequences in the Great Beyond, in the purgatorial spirit realm and even inside Joe’s dusty apartment are sublime to watch, a truly lived-in world (ha!) that feels like you could reach into your television and touch.

It should be noted that a lot of the film’s marketing had Soul down as a far more musical film than it ends up being. Yes, Joe plays a lot of jazz (and the musical jazz club sequences are superbly done) but a fair chunk of time here is spent dealing with the metaphysical aspects of the story. The jazzy stuff all comes to us from the wonderful hands of John Batiste, bandleader on the Colbert-led Late Show in the US, whilst soundtrack wunderkinds Trent Reznor and Atticus Ross (The Social Network, Patriot’s Day, Bird Box) deliver the alternative musical accompaniment, and it is wonderful. The phrase “evocative” is often bandied about too often these days but that’s a perfectly adequate term to use for what the trio of maestro musicians delivers here. 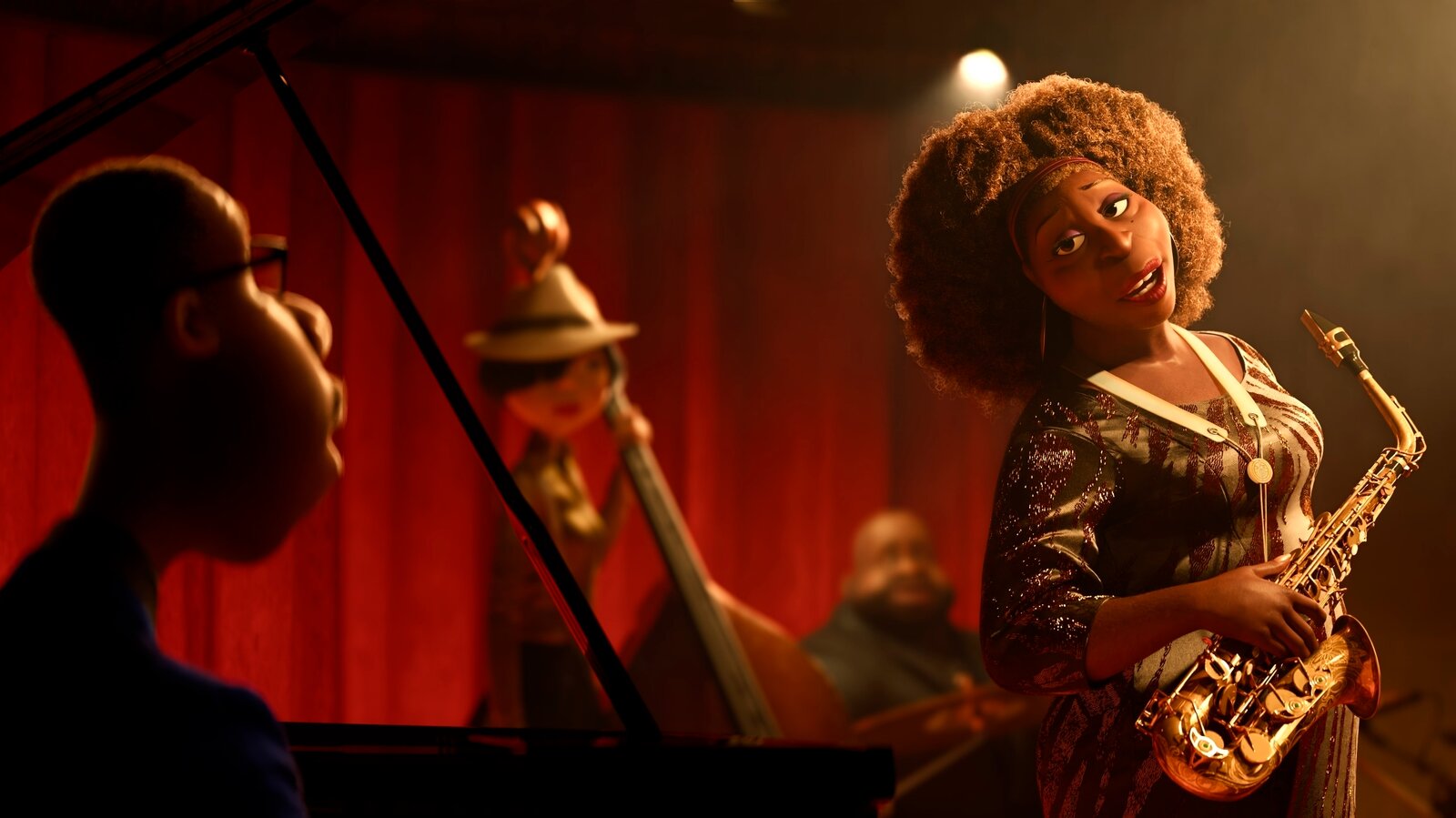 If I had a single criticism of Soul it would be ask who exactly the film is for. My kids found Soul tough going and both of them are smack inside the target demographic for Pixar’s core work, whilst my wife and I were laughing uproariously at many of the jokes and sight gags (and there’s a lot of them). So is it a kids film for adults? Arguably I would wager the film finds itself in a difficult position of being too old for younger viewers and perhaps a touch too sentimental for adult audiences – that said, it did draw a few tears from me towards the end, so what do I know? – but that’s not to take away from the fact that Soul is a very, very good movie, bordering on a masterpiece. It tackles difficult subject matter in a way that’s enlightened and amusing without condescension (no matter your faith or beliefs in such material), and presents it in a way that’s brilliantly easy to understand for all viewers. For attempting to push such boundaries, Soul easily gets a pass from me for being a little too mature for kids. 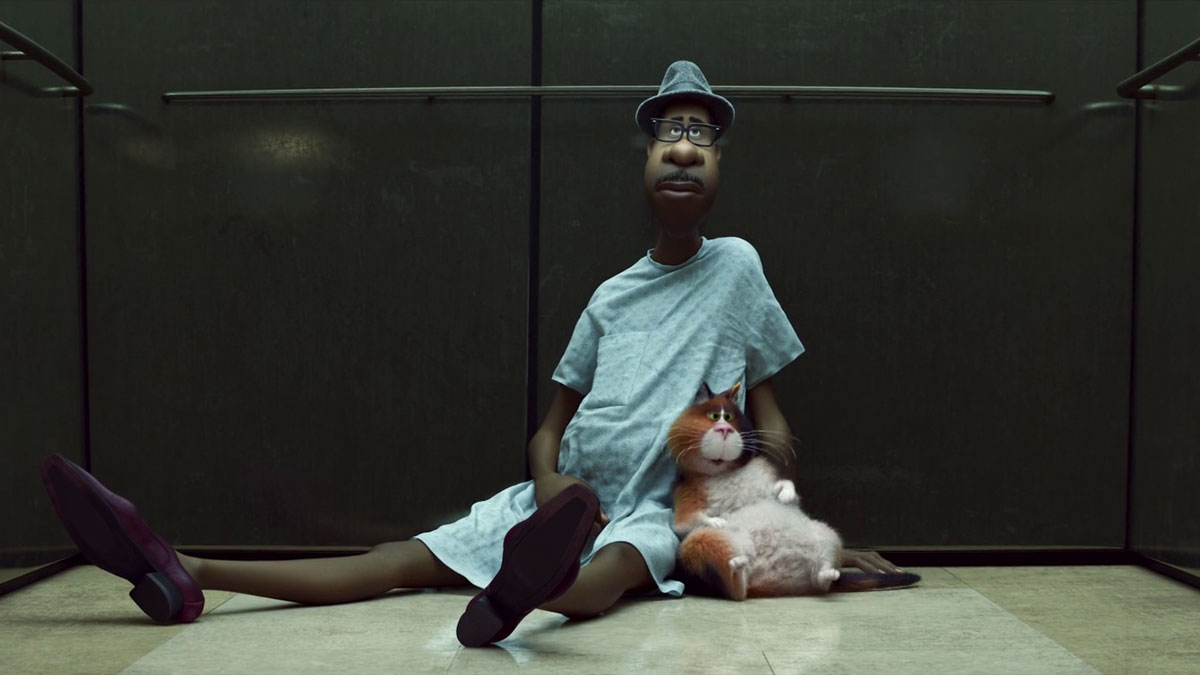 Whatever your thoughts on where we go when we die, and what makes us the human beings we are, Soul will capture your heart like few animated films dare to do. Breezily fun even when dealing with the direst of human conditions, and balancing pathos with charm and sly wit (as well as several laugh-out-loud moments), Soul is a contender for one of Pixar’s most mature ventures to-date and, caveats in place, arguably one of their most joyful.