She’s out of our haiiiiiir!

You know what’s genuinely amazing? Monsters Inc was just the fourth feature film to come out of the fledgeling Pixar Studios, a Disney co-partnership (at the time) that had born huge success with its Toy Story franchise, as well as the lesser-regarded-but-still-awesome A Bugs Life. The fourth film! Monsters Inc remains one of the most astonishing films of the post-millennial expansion of the CG animated artform, a far cry from the ubiquitous Shrek and A Shark Tale and remaining atop the pedestal of Pixar’s crown jewels for others to try and attain. To say it’s the most fondly remembered after Finding Nemo is no small feat in itself. It’s such a treasure, this film; it’s become the go-to tantrum stopper in my household of late, and even under the harsh glare of repeated viewings, the story and characters, as well as the overall plot, still stand up to close scrutiny. Monsters Inc is as close to a perfect film – animated or otherwise – as it’s possible to get. 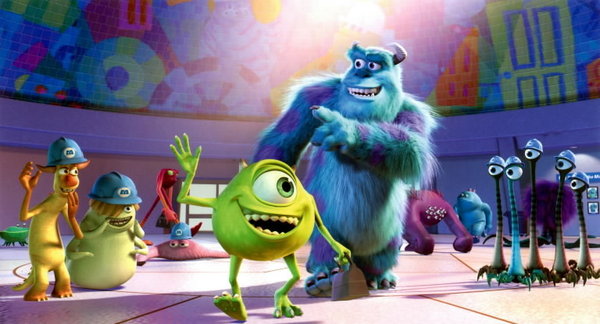 Mike (voice of Billy Crystal) and Sully (John Goodman) are monsters working in Monstropolis, a massive city powered by the energy derived from children’s screams. Working for Monsters Incorporated, Mike and Sully spend their days entering the human world via doorways to kid’s bedrooms, to scare children and generate energy for their city. Pretty cruisy, except that kids are known to be toxic to monsters, and when one, Boo (voice of Mary Gibbs) escapes into the monster world, Mike and Sully have to concoct a plan to return her. Along the way they have to avoid confronting Randall (Steve Buscemi), a chameleonic lizard monster with a vendetta against Sully, and Mr Waternoose (James Coburn), the CEO of Monsters Incorporated who is battling an economic downturn and the very possibility that the company will have to close.

It’s a fairly hard-hearted individual who doesn’t watch Monsters Inc for the first time and come away with a small lump in the throat. And I don’t mean that in any kind of cancerous way, either. My God, the ending. If a film has perfectly captured the soul of being a parent to a young child, it’s that ending, a tear-jerking moment of absolute emotive serendipity that works because the film’s earned that moment. Too often, trite emotional wrangling feels forced to a pointed conclusion, and audiences these days are canny enough to spot that, but Monsters Inc’s empathetic development of its characters first and foremost allow the audience to bond with Mike and Sully’s misadventures, to the point where we associate with them at such a deep level, it earns our moment of parental clarity at the close. The final shot of Monsters Inc is one of modern cinemas most powerful moments. 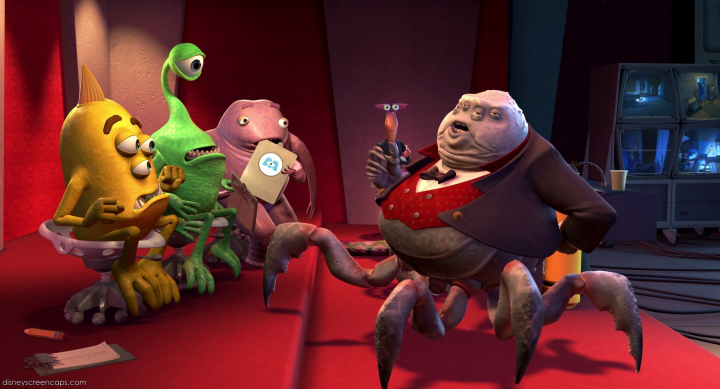 The film is a child’s playtime of idea and creation. The Pixar story team have literally outdone themselves here, pitching a unique but similar world – the Monster world – analogous to our own and existing just behind the closet door, that is as living and breathing as yours and mine. The story feels like somebody said to a bunch of nine-year olds “we want an idea about monsters and a kid who gets stuck in the monster world” and Monsters Inc is the brainchild of that. It’s so simple in concept, and so beautifully executed in design and animation, you just can’t help but love it. Mike and Sully are Pixar’s ultimate Buddy Team – maybe even moreso than Woody and Buzz, in my opinion – and both John Goodman, as the gravelly voiced Sully, and Billy Crystal as the obviously Jewish partner (!) are in career best form.

It’s often hard for a performer to get across genuine emotion in an animated performance purely through voice; largely, its the animators who have to really work hard at this, but in Monsters Inc the vocal performances are of Oscar caliber. Particularly Crystal, whose Mike Wazowski is uniquely placed to capture both childlike glee and adult remonstrations, as a giant green eyeball with legs. Neither Crystal nor Goodman put a foot wrong, and carry the film on their shoulders as two of the most entertaining animated characters in cinema. Little wonder they got a sequel in Monsters University (a good film, but not a patch on this one). Steve Buscemi’s Randall, as the chief villain, is an honest-to-goodness cracker (and his backstory in University made things make a lot of sense), while the late James Coburn essays the garrulous Mr Waternoose, a monster whose loyalty to the company could very well undo it all. 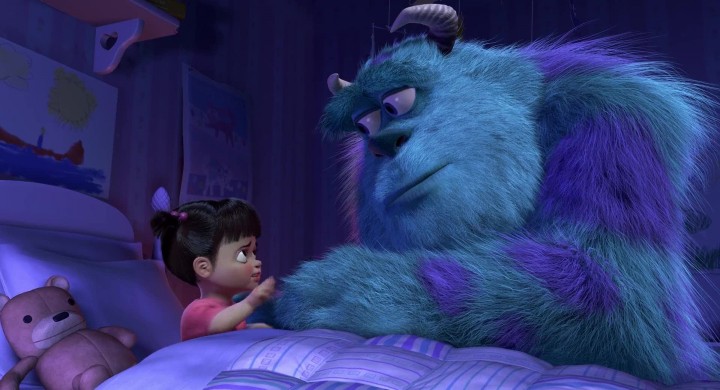 I should also mention the work of Mary Gibbs, who was barely out of nappies when the film came out, who voices the human child Boo. Boo, although having no distinct lines other than calling Sully “Kitty” throughout the movie, is a pitch-perfect evocation of childish innocence, and the perfect character to “invade” the monster world and cause untold havoc. I know they just recorded her as a baby cooing and gahing over a microphone, and laughing like a pixie at various moments, but it’s her performance alongside Mike and Sully that really sells the heart of the movie.

Truly, if you’re after a perfect viewing experience, from its pathos, comedy and emotional heft, Monsters Inc is as close to it as possible. Easily one of Pixar’s top two film (Finding Nemo being the other) and remaining so some decade after release (no small effort, that), Monsters Inc is a genuine classic for adults and kids alike. A gem in every regard.