Director :   Pete Docter
Year Of Release :   2015
Principal Cast :  Voices of Amy Poehler, Phyllis Smith, Bill Hader, Lewis Black, Mindy Kaling, Kaitlyn Dias, Richard Kind, Diane Lane, Kyle McLachlan, Paula Poundstone, Frank Oz, Dave Golez, John Ratzenberger.
Approx Running Time :  94 Minutes
Synopsis:  After young Riley is uprooted from her Midwest life and moved to San Francisco, her emotions – Joy, Fear, Anger, Disgust and Sadness – conflict on how best to navigate a new city, house, and school.
What we think :  Inside Out is remarkable: one part psychological examination of childhood, another part emotional wrecking ball of life changes, and entirely one of the most brilliant depictions of the human condition set to animation, this film finds the Pixar juggernaut at the very top of their game. I’m saying this is quite possibly in the top 3 of their best ever films. Move over Finding Nemo, stand back Toy Story 2, Inside Out has arrived and it is magnificent.

Any film that can make me cry automatically moves into the pantheon of cinematic greats – at least by my humble level of appreciation, anyway. Inside Out marks the first time I’ve cried at the cinema since Saving Private Ryan, back in 1997. As you can tell, I don’t cry often in movies (but when I do, I cry like a baby), and I could probably list on one hand the number of films in which this auspicious event has occurred. Notably, Forrest Gump is another. I think I cried during Pay It Forward but that was only because I was glad that Haley Joel Osment kid had carked it. Ahem. Inside Out, the latest from the Pixar stable, sees the studio return to the greatness which cemented their place in cinematic history; although the days of insta-hits like Toy Story and Monsters Inc have long passed, and recent fare such as Monsters University, Brave and Cars 2 have not quite kept the pace of their earlier efforts, a year off in 2014 means the blazing glory of Pete Docter’s directorial return is all the more prescient in its tear-making power. 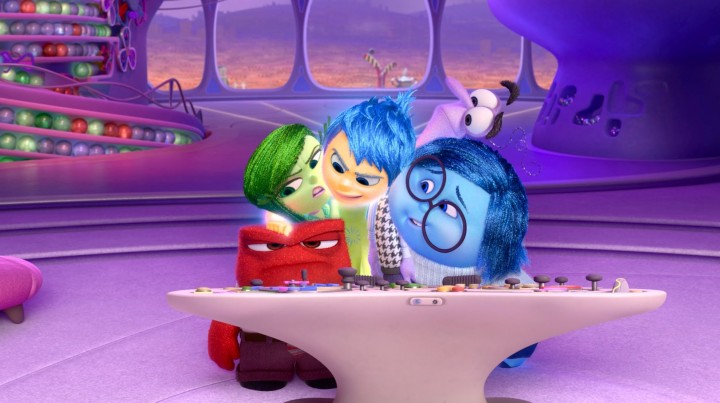 Synopsis courtesy Wikipedia:  A girl named Riley Andersen (voice of Kaitlyn Dias) is born in Eden Prarie, Minnesota, and within her mind, five manifestations of her emotions — Joy (Amy Poehler), Sadness (Phyllis Smith), Fear (Bill Hader), Disgust (Mindy Kaling), and Anger (Lewis Black) — come to life. The emotions live in Headquarters, Riley’s conscious mind, where they influence Riley’s actions and memories via a control console. Her new memories are housed in colored spheres, which are sent into storage at the end of every waking period. The most important memories, known as “core memories”, are housed in a hub in Headquarters and power five “islands” that each reflects a different aspect of Riley’s personality. Joy acts as the emotions’ leader, attempting to keep Riley in a happy state, but she and the other emotions are uncertain of Sadness’s purpose. When Riley is eleven years old, her family relocates to San Francisco after her father (Kyle McLachlan) gets a new job. Joy becomes concerned when Sadness begins touching happy memories, causing them to become sad, so she tries to keep her isolated. However, on Riley’s first day at her new school, Sadness accidentally makes her cry in front of her class, creating a new, sad core memory. Joy attempts to dispose of the new memory before it reaches the central hub, but she accidentally knocks the other core memories loose in her struggle with Sadness, shutting down the personality islands and making them unstable. Before Joy can put them back, she, Sadness, and the core memories are sucked out of Headquarters through the memory tube leading to the rest of Riley’s mind. They end up in the labyrinthine storage area of Riley’s long-term memories and begin to journey back to Headquarters. 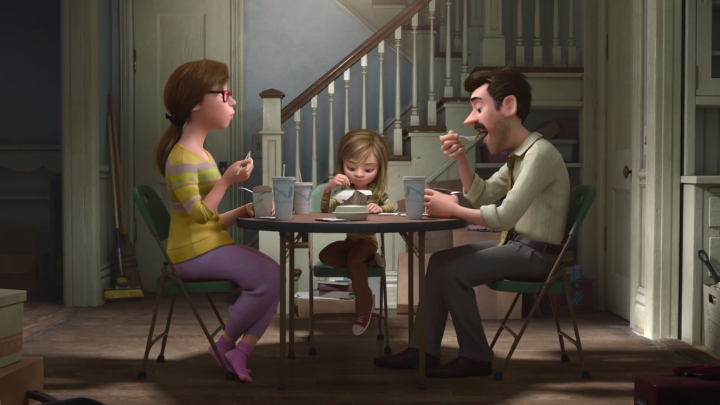 Inside Out is unlike any Pixar film we’ve seen before – hell, it’s the kind of film most animated studios only dream of producing. I should point out that it is pretty much the first “adult” film they’ve ever made, not due to the style or even the characters, but rather the powerfully emotional themes and plotting the film enjoys. Most of Inside Out will be simply pretty pictures to young kids, all of whom will probably skip past the emotion aspects of the story, while adults – particularly parents – will find most of the humor, most of the asides and thematic subtext, aimed right at them. Thinking about this point afterwards, it made me appreciate just how much adult content Pixar puts into all their films, whether it’s hidden or overt, although it’s worth mentioning that I think Inside Out is the least “kid friendly” film they’ve made on purely an emotional, complex basis. It’s not overly violent, or even really scary (at least no more so than Brave’s “bear attack” scene or the “fiery death pit” ending in Toy Story 3) but it heaves a weighty story of change, loss, growing up and innocence gone upon the viewer and I doubt younger kids will understand what’s going on. I could be wrong, though.

At its core, Inside Out is a story of family. The family unit moving across country, uprooting the young Riley’s life completely, is a scenario not unfamiliar to most people, so empathy and attachment to the premise is undeniably strong. Riley is a typical, happy teenager, who loves her friends and her family, but becomes disenchanted with the forced change in life thanks to her parents move to San Francisco. Accompanying the change is her emotional wrangling within, as she struggles to find a new identity amongst the strangers at her school, and also the aching longing to return to the world she knew back in Minnesota. Docter and his team absolutely nail this kid-into-an-adult transition with precision and acuity of emotion. Viewers with children will absolutely be attuned to this film’s precise, dead-on portrayal of a child’s emotional state, and I think this accounts for the majority of the movie’s emotional heft. It works at an adult level so well. 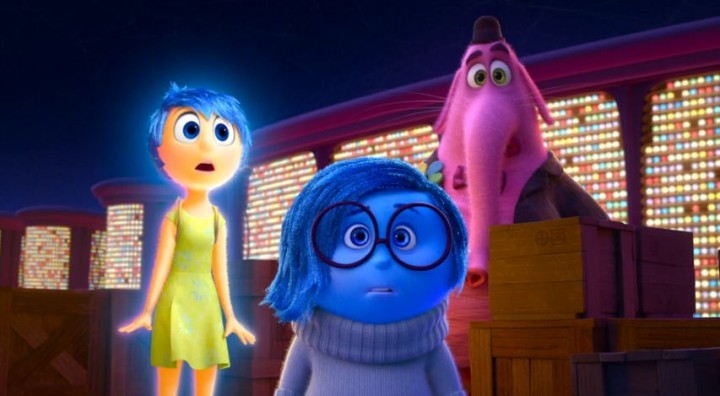 Not only do we follow Riley’s family through their journey, but also the family of emotions within Riley’s head. It’s here, with the anthropomorphism of human emotions and concepts, that the film takes things to another level. It’s highly psychological in nuance, this film, and the way the emotions interact, associate and cause reactions to Riley’s external behavior, is just brilliant to behold. I can’t remember the number of times I turned to my wife with that “that’s so true!” look on my face. The Pixar team get it spot on. From the literal Train of Thought, to ruminations on facts and opinions, to the balls of memory around which the film pivots, Inside Out’s representation of our brain’s workings is both spectacularly cool and on-point accurate. A particularly funny moment involves ice-cream brain-freeze, so keep an eye out for that.

The other thing Pixar does well is make each emotion, and each human character, so relatable. Joy, voiced by Amy Poehler, is the unofficial “boss” of the Emotions inside Riley, and the crux of the plot involves her refusal to allow Sadness, voiced with downbeat hilarity by The Office’s Phyllis Smith, to touch or interact in any way with Riley. Naturally, the film find Joy having to rely on Sadness, and eventually come to terms with the fact that Sadness is indeed a valid emotional state, and an essential one for the human condition. How this happens, however, will have most adults blubbering away in the darkness. Poehler imbues Joy with that exuberant unfettered enthusiasm you’d expect from the emotion itself, although mannering the role with a kind of humanistic approachability markedly different from any previous Pixar character. 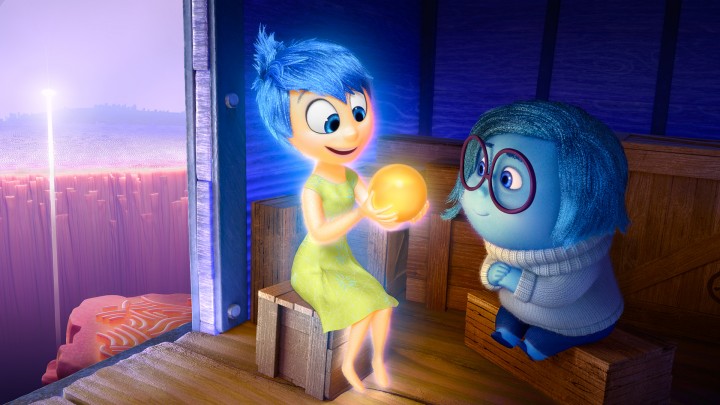 Poehler’s performance anchors the film entirely, although Kaitlyn Dias’s vocal work on Riley herself isn’t bad either. In fact, the human roles, in which Dias is accompanied by Kyle McLachlan’s paternalism and Diane Lane’s motherly softness, are above average for what could be considered fairly standard characters. Phyllis Smith’s Sadness is appropriately downbeat, similarly to Marvin the suicidal robot in Hitchhickers Guide To The Galaxy, although alongside Joy, Disgust, Fear and Anger, she’s needed for  Riley to function as a human being. Smith brings a soulfulness to her voice, a plodding, melancholy effectiveness that doesn’t make her annoying, but rather, endearing. Listen out for shouty comedian Lewis Black, as Anger, who delivers some of the film’s best throwaway lines, while Mindy Kaling is remarkably under-served as Disgust, offering only minimal influence on either the story, or the group.

Outside of the main cast, Richard Kind is one of the key elements the film needs to work. His voice brings to life Riley’s former Imaginary Friend, Bing Bong. Part elephant, part cat, part fairy floss, and part dolphin (chuckle), Bing Bong is desperate to reconnect with Riley through her memories, and aids Sadness and Joy once they become stuck in the Long Term Memory area of the girl’s brain. Bing Bong is possibly the strongest “childhood” element within the narrative, and contains some of the strongest characterization and narrative deluges, personifying without contradiction the transition from child to girl, to young adult (of sorts) in a manner that’s powerfully effective. Kind’s typically verbose enunciation and dense volume is somewhat restrained here, as Bing Bong begins to realize his own mortality – he’s an imaginary friend, after all – but isn’t quite ready to let it go. 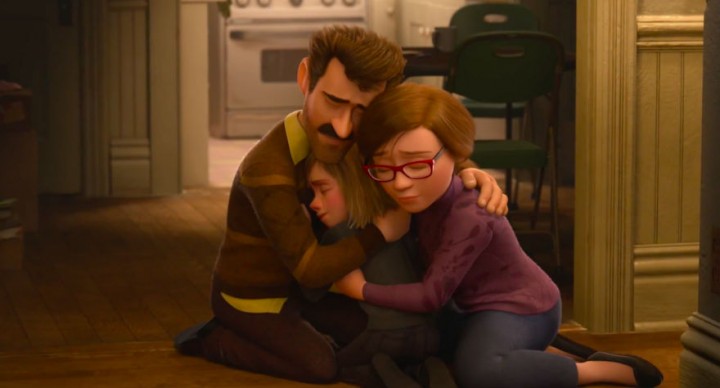 From an animation standpoint? Well, it’s Pixar, so it’s of the highest caliber, and it’s no joke to say that Inside Out represents yet another magnitude-leaping product from the studio. The character design pops off the screen – I can’t wait to get this home on BluRay! – and the intricacy and finesse with which the film is delivered is stunning. Colors are vibrant inside Riley’s head, while outside the film takes on a starkly subdued tone, as if the colors aren’t quite as strong or as pronounced. But it works: Inside Out is just a beautifully animated movie. If you’ve got young kids, there’s a fair chance they’ll just sit there looking at all the crazy colors and weird characters (at one point, Joy and Sadness accompany Bing Bong through Rileys “Imagination Land”, which is hilariously… er, imaginative), but for adults, the humor and wit involved with Pixar’s use of childhood memories will have you chuckling more than ever. Among the funniest moments? Cutaway sequences where we see the emotions of Riley’s mother and father, as well as a hilarious mid-credits sequence which makes even better use of this technique. For me, the funniest sequences involve early scenes with Riley as an infant, as a young child, as she grows alongside her emotions in parallel. As a parent myself, I appreciated the humor in this stuff.

I said up top that Inside Out has catapulted into the highest echelon of Pixar’s output to-date. While I can’t say it will have the pop-culture cut-through that, say, Toy Story or Finding Nemo had, as an overall narrative achievement and storytelling accomplishment, I think it sits only below Monsters Inc and Toy Story 2 for sheer cinematic wallop. If there’s a downside, it’s that I think a lot of the humor and fun is aimed at the adults in the audience, making “kiddie” rewatching not as likely, but based purely on the story, characters and narrative arc we’re taken on, I have to say I found this film to be one of the best I’ve seen in a long, long time. Plus, it made me cry. Pixar, you’ve done it again.

5 thoughts on “Movie Review – Inside Out”