Principal Cast : Elisabeth Moss, Aldis Hodge, Storm Reid, Harriet Dyer, Oliver Jackson-Cohen, Michael Dorman, Benedict Hardie, Amali Golden, Sam Smith, Nash Edgerton, Zara Michaels, Anthony Brandon Wong.
Synopsis: When Cecilia’s abusive ex takes his own life and leaves her his fortune, she suspects his death was a hoax. As a series of coincidences turn lethal, Cecilia works to prove that she is being hunted by someone nobody can see.

Leigh Whannell’s 2020 take on HG Wells’ famous creation, the titular invisible man, is a tense, thrilling, whackadoodle journey into insanity and terror. Fresh off his low-budget indie thriller Upgrade, Whannell dabbles with one of Universal’s most beloved cinematic icons and turns it into a part domestic violence drama, part horror-thriller, and delivers knockout blow after knockout blow. The Invisible Man is a ripping creative success, filled with emotional gravitas, weighty themes of spousal abuse and post-traumatic stress, as well as nuanced psychological underpinnings, led from the front by a terrific Elisabeth Moss. 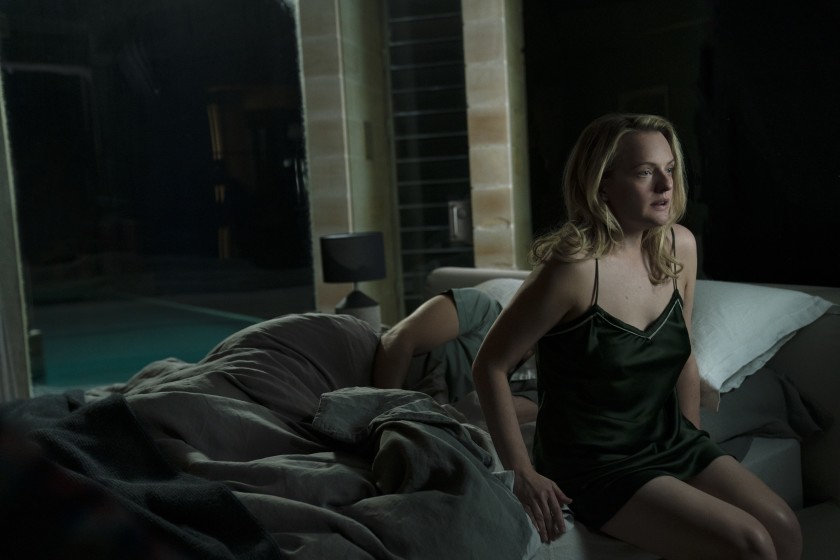 Cecilia “Cee” Kass (Moss) abruptly leaves her abusive, controlling partner, wealthy scientist Adrian Griffin (Oliver Jackson-Cohen), and spends time recuperating at the home of childhood friend, San Franchisco police detective James Lanier (Aldis Hodge – Hidden Figures, What Men Want) and his daughter Sydney (Storm Reid). When Adrian apparently commits suicide, Cee thinks she’s finally free of his controlling impulses; when his brother, lawyer Tom (Michael Dorman – The Water Diviner, Daybreakers) advises her that she’s been left a sizeable sum of money in Adrian’s will, Cee decides to use her windfall to everyone’s benefit. Thing take a strange turn, however, and she is constantly feeling like she’s being watched, or that there is some….one in the room with her, mysteriously controlling her life. She confides in James but he is disbelieving, and even Cee’s sister Emily (Harriet Dyer); while she feels like she’s slowly going crazy with paranoia, it dawns on her that Adrian appears to be well and truly alive and stalking her… and invisible. 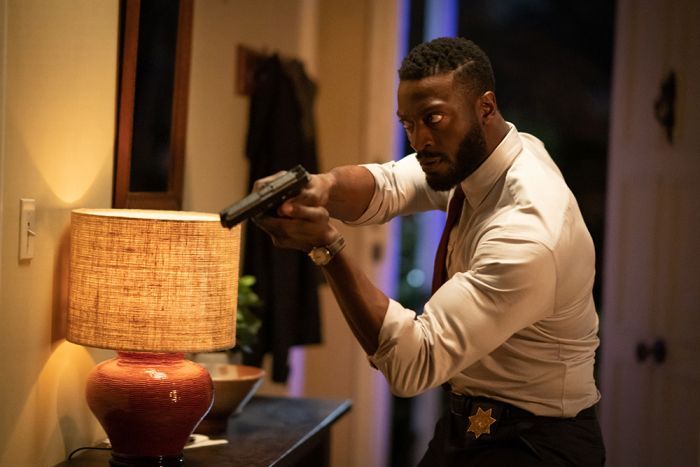 The notion of invisibility as a premise isn’t new: HG Wells published his original novel in 1897, and in the intervening 120 years we’ve had innumerable film and television iterations of not just that story but countless variations on the theme. Universal debuted their first feature film to bear the name in 1933, with Titanic’s Gloria Stuart co-starring alongside Claude Rains in the title role, spawning a clutch of sequels and spin-offs, while more modern takes on the idea include the Chevy Chase turkey Memoirs Of An Invisible Man (not based on the Wells’ creation) and Paul Verhoeven’s technologically awesome but creatively uneven Hollow Man, with Kevin Bacon and Elizabeth Shue. It’s been played for comedy (Abbott & Costello Meet The Invisible Man) and wanton comic-book usurpation (The League Of Extraordinary Gentlemen), but the story works at its best when it embraces its horror roots and tackles the psychological elements of pure invisibility. 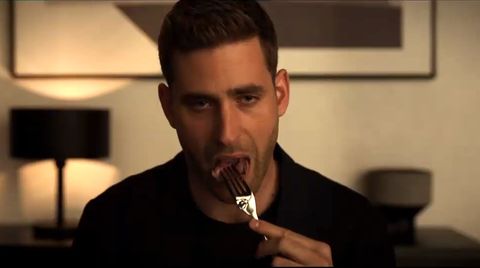 Whannell scripts his film with the focus on Elisabeth Moss’ Cecilia Kass, a woman for whom escape from a domestic abuse scenario forms the central premise of the film’s opening half. It’s a different take from previous films, which have focused solely on the man who turns invisible, but here the tables are turned (literally and figuratively) by using the invisible man plot device as the antagonist, and a genuinely scary one at that. Both Whannell’s film and to a larger degree Verhoeven’s Hollow Man went deep into the brooding god complex one must surely develop when one cannot be seen, with Whannell using a hugely triggering battered woman syndrome plot to exacerbate the inherent fear and tension in the story. Throw in the “nobody will believe the crazy woman who claims she’s being stalked” routine amped up to eleven, and you have a film that will shred both your fingernails and the armrests they’re siting on. This is an incredibly taut, insanely well directed film from the very first frame: we rest on Cass as she awakens early in the morning to begin her obviously well planned escape, an escape from Adrian’s house that also seeds ideas that will come back into play in the film’s quivering climax. From there, as she begins to recover from her anxiety with Aldis Hodge’s calming presence at his home elsewhere in San Francisco, to the rapidly escalating “crazy woman” routine as Adrian invisibly upends her life, Whannell plays not just with genre tropes but subverts them as well, downplaying the fantasy elements of such a conceit and hedging on a realism and believability to ensure Cee’s fate feels impossible to ignore. 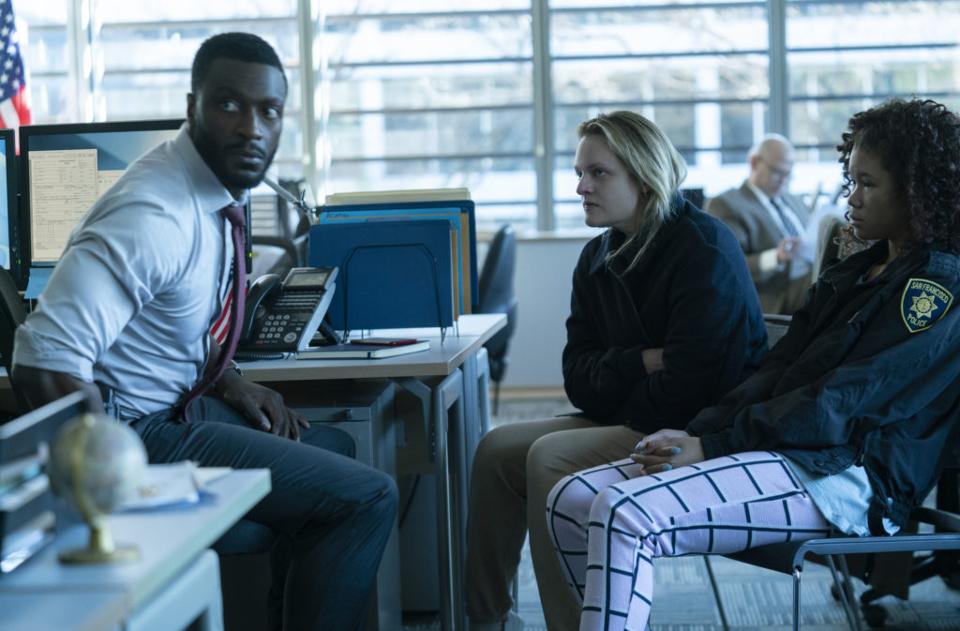 It’s also a credit to Whannell that although Oliver Jackson-Cohen’s Adrian appears only briefly in the film in his physical sense – during the whisper-quiet tense opening sequence and in one brief moment later in the third act – his presence and domination of Cee permeate the entire film. His shadow looms large over everything, and as the film progresses towards more showy effects as the “invisibility” technology developed by Adrian manifests itself, we’ve already become accustomed to what kind of guy he is without ever once seeing him really do much at all. It’s all suggestion, all double-take Hitchcockian psyche thrills and shadows-in-the-corner terror, this film, something Whannell has buried in his DNA given his horror-film roots and recurring appearances in the Insidious franchise. The Invisible Man sells hugely on presence, not actuality, and when things come to a head in the climactic finale we’re well into understanding what kind of threat we’re dealing with.

It would be remiss of me to inadequately describe the work Elisabeth Moss does in the film. She’s superb, a blazing horror film performance up there with recent classics such as Toni Collette in Hereditary or Essie Davis in The Babadook; her work in television’s The Handmaid’s Tale holds her in good stead to deliver powerful, fragile, feminist strength in spades and having an actor of this calibre roots the film in a sense of truth a lesser performer might have struggled with. Moss is captivating, easily the highlight of the film (which becomes an aggressively VFX-driven spectacle late in the piece) for holding the story together, although Aldis Hodge ain’t no slouch either, neither is the terrific Michael Dorman as the slimy, creepy brother-in-law with a hidden agenda, and Harriet Dyer as Cass’ sister Emily. But it’s Moss’s film, and she owns every moment she’s on the screen (which is a lot, frankly), offering one of 2020’s truly remarkable performances that will stand the test of time. 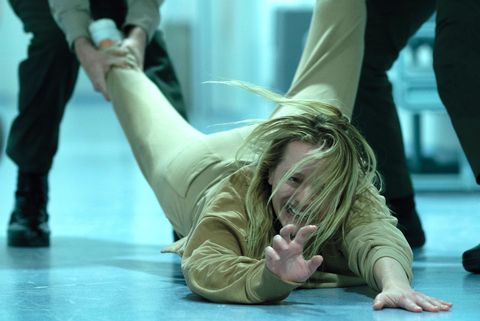 Enabling Moss to do her best work is Whannell’s direction, which is razor-wire tense and astutely restrained. Whereas Verhoeven’s Hollow Man was all about showmanship and pornographic state-of-the-art visual effects to show a man becoming invisible, Whannell treats the subject as a less-is-more classic, offering some nice rehashed tropes with intriguing and surprising new twists on the invisibility premise without pandering to his audience or dumbing things down to make it easy for us. Not only does his film work on an emotional level, but it more than amplifies its suggestive threat levels with a quiet, menacing style far from what the director gave us with Upgrade. The difference in tone between the two films is remarkable: Upgrade was a gritty, urban nightmare of euphoric and palpable futurism, whilst The Invisible Man is nauseatingly tense, quietly moody and lurking with a malignancy unfettered by schlock or simplicity. The Invisible Man is an instant classic, a sophomore directorial effort that powerful stamps Whannell’s cred as a legitimate horror filmmaker but a crafty, intelligent filmmaker who knows how to push an audience’s buttons and make them squirm. Arguably the first best film of 2020.