Director :  Russell Crowe
Year Of Release :  2014
Principal Cast :  Russell Crowe, Olga Kurylenko, Yilmaz Erdogan, Jai Courtney, Dylan Georgiadis, Cem Yilmaz, Ryan Corr, Jacqueline McKenzie, Isabel Lucas, Damon Herriman, Steve Bastoni, Megan Gale, Deniz Akdeniz, Mert Firat, Daniel Wyllie.
Approx Running Time :  111 Minutes
Synopsis:  In 1919, a father searching for his three sons lost on the battlefields of Gallipoli, stays at a Turkish hotel run by a widowed mother.
What we think :  Sentimental war film clutches its cliches tightly, not content to tug at the heartstrings when it can rip them clean out. Led by Russell Crowe in another effortlessly wonderful performance, The Water Diviner features less divining than the title might imply, but has at its heart the passion, the love, and the soul of the conflict that gave Australian its ANZAC legend.

Within the context of The Water Diviner’s seemingly rose-colored view of the First World War is a scene that sums up the savagery of conflict irrespective of combatant. A piece of dialogue, delivered by actor Daniel Wyllie (as Captain Brindley, delivering a rebuttal of request to Russell Crowe’s character), in which he describes previous war repatriation as being non-existent: in the old days, the battlefields were cleaned by digging a dirty great hole, and raking everything into it – horses, dogs, men – with a little bit of lime. The First World War saw a change in stance on repatriating and acknowledging the deceased in battle, and Australia’s war dead continue to lie somewhere along the Gallipoli peninsula as their graves remain unknown. Not for lack of trying. A harrowing account of war is never easy to bear witness to, and The Water Diviner’s somewhat searing account of our military troops scouring the Turkish landscape for the location and identities of our dead should not be taken lightly. 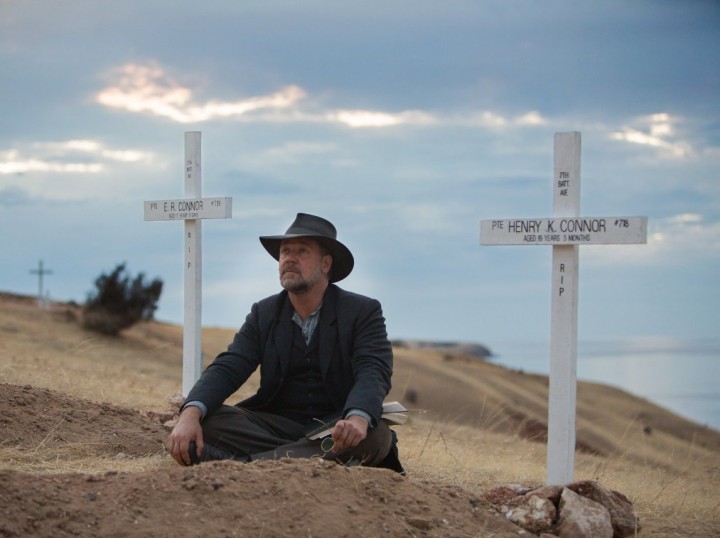 Apparently based on a true story (although the truth of which I was unable to ascertain through my various Googling for the three minutes I had before writing this review) from the novel written by husband-and-wife team Dr Meaghan and Andrew Anastasios, The Water Diviner tells of a father, Joshua Connor (Russell Crowe), who leaves Australia shortly after the end of World War I, in 1919, to search for the bodies of his sons, who have been killed in combat on the Gallipoli Peninsula in Turkey. His wife, inconsolable following their sons’ deaths, kills herself, leaving joshua alone and searching for meaning in his now empty life. Traveling to Turkey, Joshua lands at a local hotel, run by war-widowed Ayshe (Olga Kurylenko), and after finding himself stonewalled by the local British authorities (led by Captain Brindley, a wonderful Daniel Wyllie), he slips away to the peninsula in secret. There, he meets Australian Lt Colonel Hughes (Jai Courtney), who assigns him the assistance of former Turkish commander, Major Hassan (Yilmaz Erdogan), to locate the remains of Joshua’s sons. 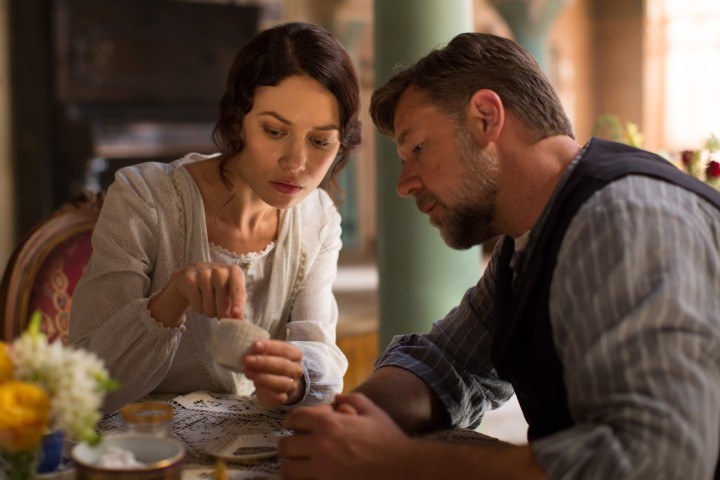 You get the sense that Russell Crowe approached his debut directing job with the reverence of the ANZAC spirit, and as much as he tries to imbue the film with the same heart and soul as Australians now commemorate our first national war effort, there’s a certain triteness to proceedings that mitigates much of what might have been a terrific story. Since he’s both directing and starring, you know this project is something of a passion piece for Crowe, and it shows in almost every loving frame. Shot by the late Andrew Lesnie, with a warm color palette that never wavers even when tackling the “battle” sequences, The Water Diviner does run afoul of the inward self-importance some of these kinds of films become, even if it’s unintentional. Crowe’s manifestation of ANZAC spirit in a film about a lost father battling crushing grief, analogous to most of the population of Australia, and to a lesser extent within the film, Turkey, is both crashingly patriotic to a fault, and comparatively intransigent in its manifest of the heroism of war.

Both sides of the war are presented here, as it should be – both Turkish forces and Aussies are represented through the thick soup of recent antagonism; the issue of mutual distrust runs through a supporting character working the battlefields searching for remains, and underlying hatred remains as Joshua attempts to placate those in charge to allow him to look. It’s an interesting and welcome addition to the war film genre, particularly an Australian war film, which has until not portrayed the Turkish fighters at Gallipoli as anything other than nameless “villains” at their most basic level. Through the addition of Hassan, essayed with mournful regret by Yilmaz Erdogan, the Turkish forces losses are represented (to the point, the Turks lost more men at Gallipoli than the Allied forced who landed) and the affect the war had on their country is powerfully (and yet, controversially) examined. Whether or not Russell Crowe’s film works as an anti-war film is not the issue; it’s firstly a father-son epic, a trash-bag of melodramatic romanticism second, and a war film third. It’s the war that gets in the way of the rest of the story.

The Water Diviner is no doubt a heart-on-sleeve piece, and by and large it works even in spite of Crowe’s romantic cinematography and teary-eyed performance as Connor, a role no doubt molded into one he could manage with his trademark growl and piercing visage. Although its entrenched war cliches abound, and hugely fantastical narrative contrivances serve as plot rotation manifesting as “character development” (exactly why Olga Kurylenko’s Ayshe is in this film, slowing Joshua’s search for his sons, is never explained, nor is it valuable to the overall plot other than to provide a subplot to Joshua’s emotional wrangling), The Water Diviner certainly brings the pain of anguished loss. It’s hard to watch Crowe’s three on-screen sons, none of whom are given much to do other than appear in flashback and one crucial mid-point scene that sets the requisite “plot twist” in motion, given such short thrift. Instead of making them characters we get to know, Crowe’s direction turns them into almost faceless nobodies that provide only the barest emotional weight other than that which Crowe himself provides. And Crowe works his magic well. 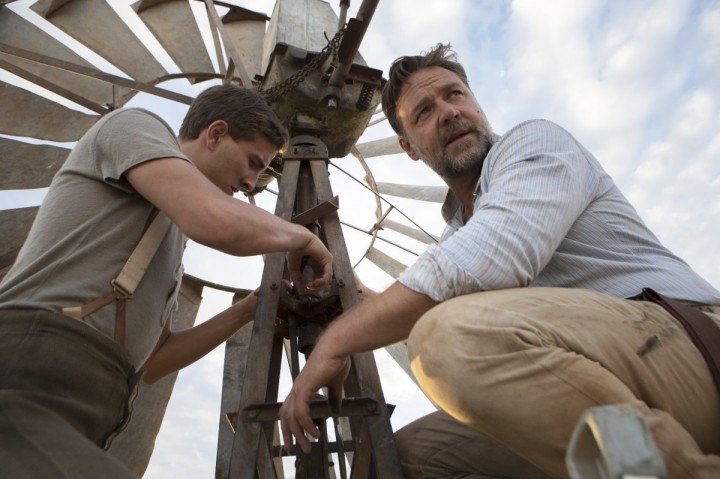 As insufficient as the film is with its raw heraldry to war, its nearly overdoses on schmaltzy pontificating as Crowe’s camera swivels around Istanbul, Turkey, and the Aussie bush. Treacly sentimentalization overwhelms the films’ latter third, a fatuously bloated overwrought cobble of combative Greek militia (this is apparently where American critics have a problem, because Crowe’s outright refusal to acknowledge the Armenian Genocide appears to be within the purview of his mandate to make the film…. right…) and seasoned familial cliche, rounded out with a soft-glow romantic conclusion destined to make most audiences feel somewhat shortchanged by the ending. Where Crowe’s film works hard in the early scenes to provide a solid backdrop of patriotic tragedy, the concluding rag-tag of afterthought combat just treads into territory one might consider heavy-handed.

I did enjoy The Water Diviner, but not without caveats. As a first-time film for Crowe as director, it’s competent and masterfully shot (no doubt he’s aided considerably by his production team) but lacks an edgy hand-print of his own making. It’s a “by committee” film that can’t escape that “constructed for maximum emotional impact” feeling, even if that impact is limited through simplistic characters and overt romanticism. I get what Crowe was aiming for, and I admire his effort in trying to achieve it. Here’s hoping he has another opportunity to further hone his skills behind the camera. Although, in retrospect, I’d rather see him in front of it. The Water Diviner has its problems, but remains a worthwhile entry into Aussie wartime cinema, and should be seen in the youthfully simple manner in which it’s presented.