A bonkers-nuts sci-fi actioner from Saw franchise co-creator Lee Whannell, Upgrade’s grungy tone and pulp sensibility work superbly with its violent punctuation and freeform directorial panache. Filmed in Australia and featuring some startling moments of gore and violence, you’d be forgiven for expecting Upgrade to blip on the cinematic radar and slide off into cult status as quickly as it emerged; the film has some legitimate staying power thanks to credible performances and a stylish, polished visual vernacular afforded a script that’s as workmanlike as its central character’s monkeywrench backstory. 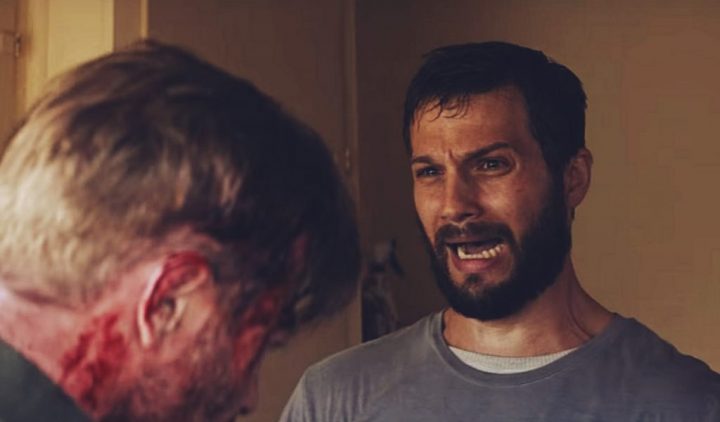 In the future, stay-at-home mechanic Grey Trace (Logan Marshall-Green) lives with his tech-company employee wife Asha (Melanie Vallejo), until the night they are attacked by thugs and she is brutally murdered, leaving him a quadriplegic. Grey is offered a chance to live a normal life by uber-rich philanthropist tech guru Eron Keen (Harrison Gilbertson), who plans on inserting a special new computer chip into the injured man’s spine to allow him full bodily function again. Accepting, Grey is surprised that the chip, STEM, has significant abilities, allowing him to track down the men who killed his wife, and avoid suspicion from local detective Cortez (Betty Gabriel). With enhanced strength and combat skills, Grey scours the city’s underbelly to track down a man named Fisk (Benedict Hardie), the one who knows the motives behind his crippling injury and his wife’s death.

Whannell’s sophomore directorial effort is a muscular one, an evocative, incredibly stylish attempt to work with futurism and technological ubiquity as it pertains to our rapidly modernising society. A whiff of Minority Report, a touch of I Robot, a splash of Her and a load of bloody body horror, Upgrade feels like a breech-birthed child of post-modern sci-fi that grinds out a startling vision of the future, and that  in many ways feels too close for comfort. Self-driving autonomous cars, which aren’t too far from becoming mainstream ideas today, are a burgeoning technology in Upgrade, and police surveillance via drones provide a smothering of Big Brother control over the population; the wealthy elite of Upgrade live in a utopian Star Trek-styled paradise, while the poorer and downtrodden, represented by Whannell’s earthy, gritty underground sensibility here, are actively trying to subvert the intrusion of technology into our lives. It’s little wonder that Upgrade’s version of Elon Musk, Gilbertson’s Eron Keen, feels so familiar. 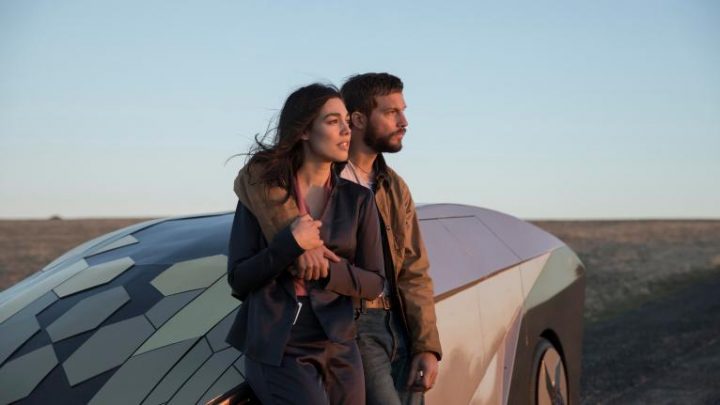 Key to the film’s particular dynamic is the inclusion of STEM, an artificial intelligence voiced by Simon Maiden that only Grey (and we) can hear. STEM enhances Grey’s physical and intellectual capacity significantly, making him a prodigiously dangerous fighting machine despite his actual body being incapacitated through spinal injury, and the revelation of this ability throughout the film is one of the story’s highlights. Whannell’s screenplay does just enough to make us familiar with the technology (are we really that far from it considering our we can converse pretty well with our phones’ AI even now?) before pummelling us with his particular brand of ultra-violence in a manner that feels weirdly Kubrickian, torn from A Clockwork Orange and injected with pure testosterone. Upgrade isn’t a film for the faint of heart, delivering brutal violence and thematic carnage on its way to an ending I kinda spotted coming about half way through but was still delighted by, and it’s fair to say that the movie doesn’t take the easy way out. 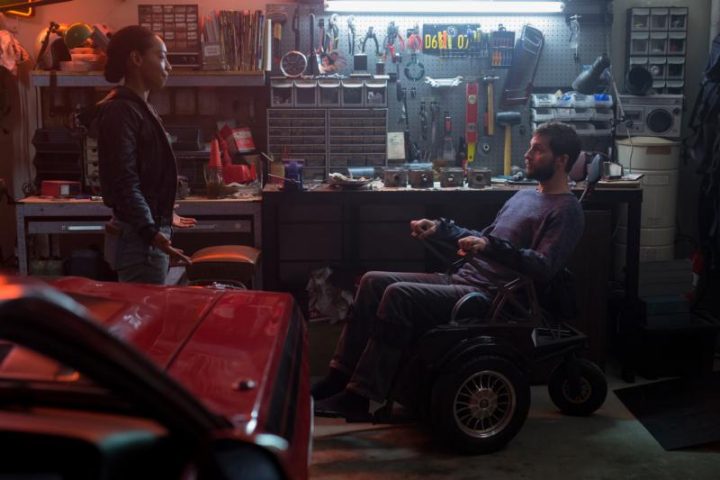 Upgrade is shouldered by actor Logan Marshall-Green, who delivers both the emotional and physical range to make the schlock plot feel plausible if not empathetic in some manner. The man’s uncanny resemblance to Tom Hardy’s immersive on-screen performances serve him well here, transitioning from mildly techno-phobic mechanic to unwilling participant in a Grand Scheme MacGuffin with compelling rage and shock. Betty Gabriel is tasked with little depth in her role as stoic future cop Cortez, a fairly generic role that serves merely as plot propulsion and a catalyst for Grey’s ratcheting tension. Melanie Vallejo, as Grey’s murdered wife Asha, grafts herself into the film as an idealised life partner with zero depth, and her death is perfunctory rather than emotional in terms of spectacle and plot. The film’s primary antagonist role is filled by Benedict Hardie, as Fisk (for a moment, I half expected Vincent D’Onofrio to make a cameo when I heard the name), and of the supporting cast it’s he who makes his relatively thin character development work as well as it can. Hardie never seems like a real Big Bad, though, perhaps going against the grain in terms of casting for this particular role. 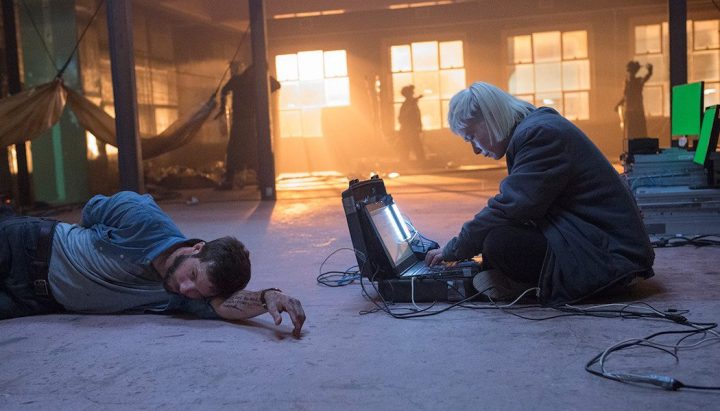 A smattering of Aussie talent provides filler for the rest of the film – Kenny co-star (and Shane Jacobson’s brother) Clayton Jacobson plays a tattooed bartender, while industry stalwart Linda Cropper (The Pacific) plays Grey’s mother, Pamela – and the film was shot in and around Melbourne, making spotting local landmarks a fun time for this reviewer in particular. The production value on the film is middle-tier, with the movie taking place inside a lot of dank buildings, warehouses and sets, while an extended freeway pursuit between Grey and Cortez is expeditiously visceral, despite looking like it was filmed on the same 1-mile stretch of road. CG effects, such as the head-up displays, console and holographic visuals, are well executed, and the cinematography (by Stefan Duscio) is reminiscent of 80’s genre styles, with blown-out highlights and deep, grainy shadows approximating a very Blade Runner-esque visual motif. Upgrade borrows liberally from across the sci-fi spectrum, more often to its success than anything else.

Upgrade is an absolute blast of violent, kinetic vengeance and subversive futurist extrapolation. Scary as that is, what’s scarier is how close to Upgrade’s vision of the future we already are. The pulp story and grungy, grimy aesthetic employed by Whannell in his vision of a disturbed, technology-enhanced future form a potent backdrop in this intentionally lowbrow action flick. The fight sequences are brutal, the kill scenes will make you wince, and the film’s “revelation” ending will either grip you or make you roll your eyes with disdain; either way, Upgrade is going to be a cult classic for multiple reasons, and I had a great time with it. Highly recommended.