Principal Cast : Qui Chuxiao, Li Guangjie, Ng Man-tat, Zhao Jinmai, Wu Jing, Ardaky Sharogradsky, Mike Sui, Qu Jingjing, Zang Yichi, Yang Haoyu, Li Hong Chen, Yang Yi, Jiang Zhigang, Zhang Huan.
Synopsis: The sun was dying out, people all around the world built giant planet thrusters to move Earth out of its orbit and to sail Earth to a new star system. Yet the 2500 years journey came with unexpected dangers, and in order to save humanity, a group of young people in this age of a wandering Earth came out boldly and fought hard for everyone’s survival.

As discombobulating multiplex blockbusters go, China’s entry into the “most successful film of 2019” race works a treat. Big, loud, obnoxiously manipulative and a whole load of gargantuan fun, Frant Gwo’s sci-fi epic if filled to the gunnels with genre cliches and all manner of predictability, borrowing liberally from the American prototypes the director was inspired by; The Wandering Earth is a rip-roaring blend of classic Roland Emmerich armageddon disaster film via the Michael Bay action sensibility delivered with cool-to-decent CG effects and every single possible variation on disaster movie characters populating this destructo-fest. Is it entirely silly? Hell yes. Is it occasionally utterly preposterous? “Occasionally” meaning every single second, you mean, then absolutely. Is it a load of fun? Assuredly. The Wandering Earth has shattered box-office records: at the time of writing, it’s the third highest global box-office success of 2019 (behind only Avengers Endgame and Captain Marvel, the second-highest grossing non-English film of all time, and the second-highest Chinese film of all time. Little wonder Netflix snapped this one up as fast as it did. 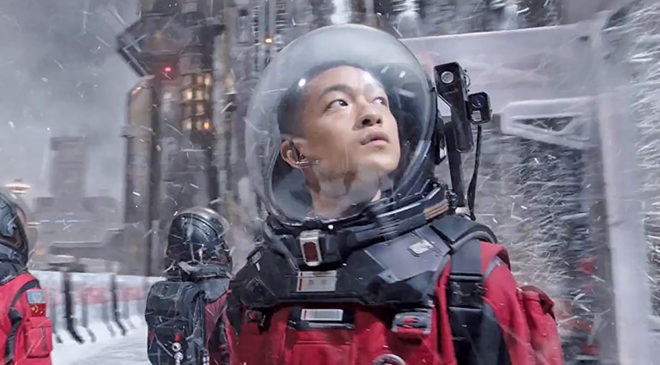 In the far future, the Earth is under threat from the Sun, which is threatening to expand and destroy the solar system. Humanity comes together and constructs thousands of enormous rockets on the surface of half the planet, powerful enough to move our world out into space as an evacuation method. As the Earth freezes away from the Sun, it is about to arrive near Jupiter, where it will use that planet’s gravity to slingshot us out beyond the reaches of our Sun’s imminent destructive force. A young kid leaves the safely bunkered confines below the surface with his sister, only to find himself in dire peril as both the engines and the slingshot method fails, meaning Earth is about to collide with Jupiter and destroy everything. The kid’s father, commander of an international space station hurtling forward as an advance party for the Earth, realises that he is the last hope for a doomed planet and has to overcome the station’s artificial intelligence computer system to save the world and all remaining life on Earth. 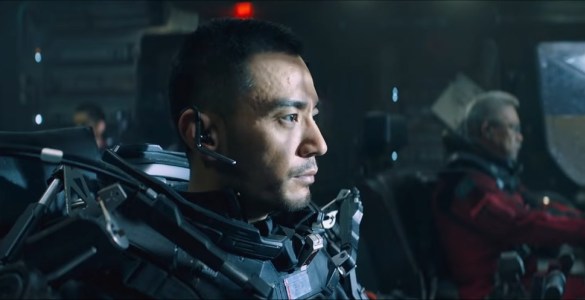 The premise for The Wandering Earth is astonishingly great, based on a lauded novella by Hugo Award-winning writer Liu Cixin, and it’s perfectly suited to insane film-making of this scope and grandeur. If only the film’s writers had put as much attention into either the film’s plot and characters as the premise might have suggested, because what feels like an epic sci-fi flick jettisons sense and reason all too quickly and replaces it with predictability and rote genre cliches. It’s a variant of the Titanic model – thrust all-too-human protagonists into full-scale disaster around them and cue heavy-breathing melodrama amped up to eleven. The film jigsaws two specific Hollywood blockbusters within its DNA, Michael Bay’s Armageddon (complete with Russian cosmonaut comic-relief) and Roland Emmerich’s frozen-planet epic The Day After Tomorrow. If you’ve seen those two films, then The Wandering Earth will feel immediately familiar. If you’re aware of Kubrick’s 2001: A Space Odyssey, Gerard Butler’s recent Geostorm, or some of Afonso Cuaron’s Gravity, you’ll see some major influences here. Built around a sense of family conflict betwixt the laboured exposition and flat-out action set-pieces, The Wandering Earth’s propulsive (ha) narrative barely pauses for breath from the get-go, and suffers the indignity of many modern disaster epics: a lack of characterisation pummelled by an abundance of in-jokes, crazy dialogue and goofy visuals. 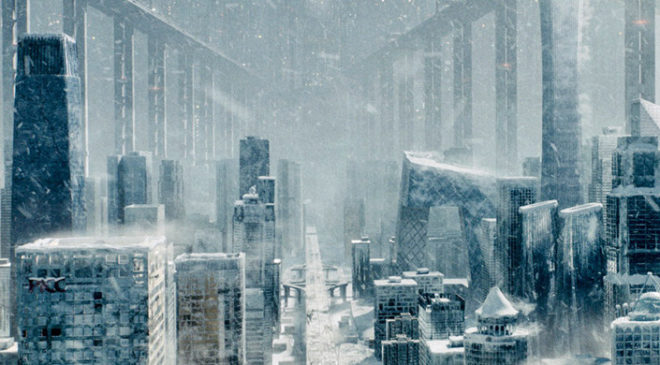 Similarities to modern Western sci-fi aside, The Wandering Earth does a solid job of delivering spectacle. The film’s impossible premise is batshit crazy yet immediately accessible, although the gargantuan tableau never feels overwhelming as a backdrop to characters we’re instantly familiar with. The film’s leads belong to Wu Jing, as the space station’s commander Liu Peiquang, whose son, Liu Qi (a terrific if somewhat wooden Qu Chuxiao) and adopted daughter Duoduo (Zhao Jinmai) are on Earth while their father’s mission lasts a decade or more, and to a tee they all perform their roles perfectly adequately; family friction is evident and provides mild catharsis and emotional arcs for the viewer, but they’re never more than simplistically designed and motivated. The same can be said of all the characters; there’s the reticent yet noble grandfather, the beach-blonde ‘fraidy-cat, the stoic and resolute militaristic group, the conveniently brainy geek dude who solves most of the technical problems with sheer chutzpah, as well as a smattering of nameless tertiary characters who provide both cannon fodder and dutiful saps consigned to imminent death serving a futile-yet-heroic fate when the Earth’s engines need kick-starting later in the film. Contrivances, and an absence of both logic and accurate physics abound: one character carries a Schwarzenegger-level mini-gun around on his armoured backpack the whole film, with the sole reason being to shoot at ice and up at the sky in a rage (why? Who cares, it just looks cool), while as we learned in Independence Day, a geek armed with a laptop can practically save the world from destruction. It’s a lot of popcorn cinema to take in, and some may find themselves overdosing on cheesy, cornball saccharine, but for me the film worked more than it didn’t in spite of these inanities. 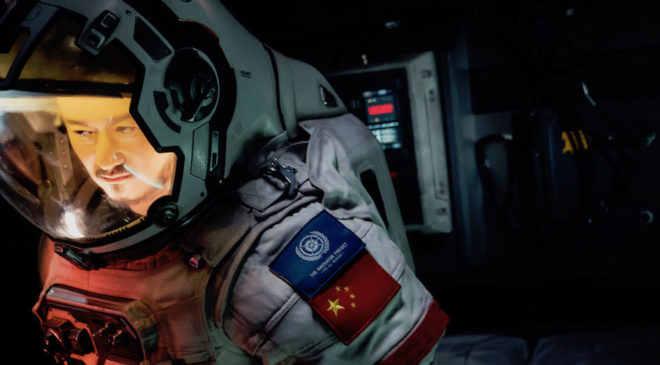 While it won’t win any awards for quality writing, nor will it snag any gongs for acting, The Wandering Earth is all about grand, operatic scale and overblown human sacrifice. It’s a patriotic Chinese entry into the mega-budget disaster epic, and for what it’s worth it covers all bases with regards to entertaining the audience through sheer force of will. The visual effects, of which there are an innumerable number, range between halfway decent and breathtakingly beautiful, are a showcase of sci-fi excellence, and coupled with the film’s intrinsic premise, soaring musical score (by Roc Chen) and vivid cinematography (by Michael Liu) elevates what ought to be a pedestrian story of survival against apocalyptic odds to a mini-cult classic. Director Frant Gwo, energetically steering this film between hysterical action extravagance and overblown dramatic preposterousness (it might play different in China than it does here in Australia), has a sharp eye for what works, and balances the ridiculous and sublime with a fair degree of panache. It’s all about showmanship, this film, and Gwo delivers in spades. Does it make much sense? No, but then it never needs to. It’s all about the instant gratification, and as our varied cast go through the I mean motions of this genre, it’s all handled with the delicacy of blunt force trauma; yet it works. The film succeeds in spite of familiarity, a little like snuggling beneath a favourite blanket.

The Wandering Earth is a hodge-podge of ideas and concepts, with an overall tone of almost every Hollywood disaster flick from the last two decades, brought to life with energy and fun from Frant Gwo, and although the English dub I watched obviously has issues of timing and carrying the obviously Chinese influences to the same degree of potency as the original dialogue, the enthusiasm of the film’s hilariously over-the-top premise and sense of spectacle more than overcomes the few shortcomings on offer. It’s impossibly stupid but deliriously inventive, the perfect homage to Hollywood blockbusters and a delightful throwback to the grand disaster epics of previous decades.