It would be a fair understatement to suggest that there are far too few female superhero role-models these days, particularly on the big-screen, so it’s refreshing in almost every conceivable way that Marvels’ Captain Marvel, which features the popular comic book character of Carol Danvers, airforce pilot and cat lover, get to strut her stuff in the MCU. Touted as Marvel’s most powerful hero, which bodes well for her inevitable confrontation with Thanos in Endgame at some point, the character represents the studio’s first female-led superhero movie outing, something fans have been clamouring for for a while now. The character was teased every-so-briefly in Infinity War’s post-credit sting, with a disintegrating Nick Fury frantically tapping on an old-school pager resulting in the Captain Marvel logo to appear, and in their wisdom the studio cannily decided to introduce Danvers’ to the screen in her own film sandwitched between both Avengers films, mainly because she is expected to play a significant role in Thanos’ downfall and we needed to know who she is. So has the wait for Marvel’s first female-centric superhero film been worth it? My goodness, it feels like it’s been forever since Room actress Brie Larson was cast in the role and caused the internet to essentially melt down, and the ongoing combative nature of crybabies online regarding everything about the production has been persistently stupid. I’m just glad the film is out, and we can all go back to hating Ghostbusters again. 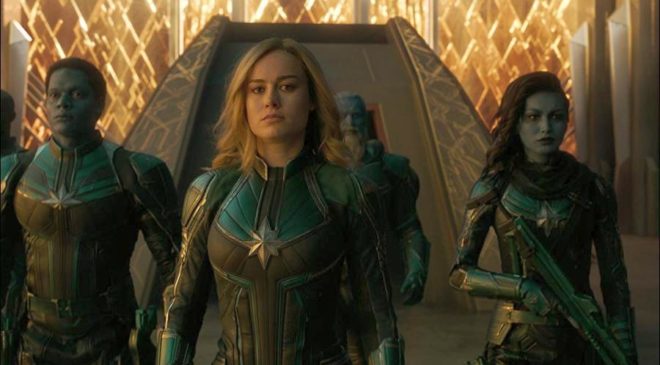 Higher. Further. Faster. Flashier. Captain Marvel is a heck of a kickass ride. Sure, as with most Marvel films it remains subservient to the larger picture the entire franchise is built on, but the heart and soul of the film is well carried by Larson, and, to a lesser extent, Sam Jackson, in introducing Marvel’s most powerful hero to global audiences. The film primarily takes place in 1995, in the heart of the Kree/Skrull war across the other side of the galaxy: Kree warrior Vers (Larson) and her tactical group, led by Yon-Rogg (Jude Law), seek out shapeshifting Skrulls who have kidnapped a Kree spy. Ambushed, the Kree are scattered, with Vers captured and subjected to a mental interrogation by Skrull leader Talos (Ben Mendelsohn), before escaping and crash-landing on our world. Vers encounters Earth’s SHIELD Agent’s Nick Fury (Samuel L Jackson) and Phil Coulson (Clark Gregg), and discovers the true heritage of her amnesiac life as a Kree: she is actually Carol Danvers, a former US airforce pilot who was thought to have died testing an experimental aircraft for Dr Wendy Lawson (Annette Benning), a whom who keep reappearing in Vers’ dreams that she does not know. Danvers’ arrival on Earth and her re-connection with former friends, including fellow pilot Maria Rambeau (Lashana Lynch), triggers her memory to return, and the gradual realisation that her entire recent life has been lived as a lie. 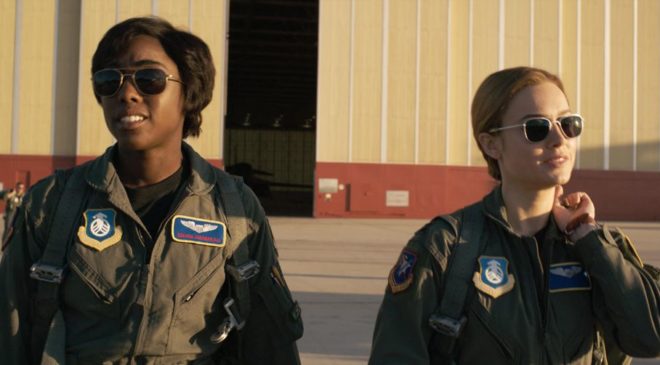 As origin stories go, Carol Danvers’ might not be in the same league as, say, a Batman or Spider-Man or Superman. The role of Captain Marvel in the larger MCU may be utterly alien to casual fans as well, with this big-screen adaptation perhaps being most peoples’ first encounter with the supercharged hero, so it was always going to be difficult bringing the character into the fold in her own right (unlike Black Panther, say, who was cold-introduced in Civil War before getting his solo movie) and remaining a part of the larger established franchise. Origin stories are incredibly difficult to do well anyway these days, as most of the good ones have all been done (some, literally to death), and to its credit Captain Marvel takes an unusual route by not only setting it some twenty-something years ago but also using flashbacks to build the plot and deliver some nice little twists in the tail. As somebody unfamiliar with the Danvers character, I knew almost nothing going in, and came out entertained and educated about yet more of Marvel’s cosmic landscape, something the saga has built upon since hinting at it in Avengers and establishing in both Thor and Guardians of The Galaxy. This film takes that establishment and runs with it, hardly bothering to utilise a traditional exposition-laden formula to bring us up to speed; instead, we’re thrust mid-stream into the Kree/Skrull conflict, and the film quickly plays upon our natural inclinations to take sides. 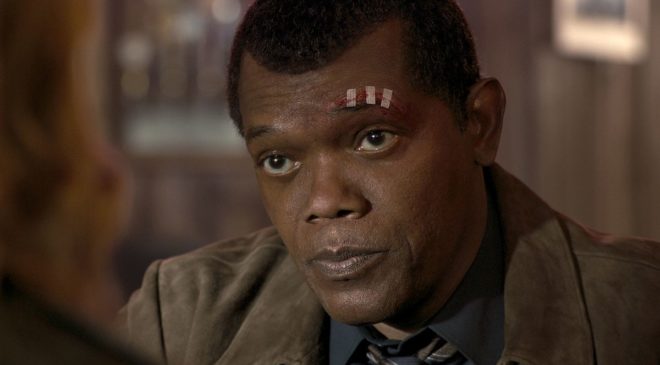 A lot of the film plays with memory, or rather Danvers’ lack thereof, and as the film unwinds the woman’s fractured dreams and fleeting flashbacks, the larger canvas of her link to Earth, and her pull towards the Kree race, are developed well. The script by directors Anna Boden, Ryan Fleck and co-writer Geneva Robertson-Dworet hones in on Danvers’ humanity, a playful yet determined-to-have-a-good-time comic-booky sense of scope and chemistry that should satisfy harder Marvel fanboys and newcomer fans alike. The film has flashes of Marvel’s patented humour, delivers a rousing climactic set-piece, and more than once tips the hat to established concepts within the larger MCU – inclusions of Sam Jackson and Clark Gregg, who are depicted through de-aging computer technology as being far younger than their present-day characters (the effect on Jackson is brilliantly achieved, while the result on Gregg….less so), as well as a returning Lee Pace as Ronan The Accuser (central villain of the first Guardians flick) and the blue tesseract-come-infinity-stone from the first Captain America, Avengers and eventually Infinity War gets a look in again. Yes, Marvel continue to seed plot threads and callbacks even in this film, and complaints about this should fall on deaf ears by this point. The echoes of our memory of the wider MCU, juxtaposed alongside Danvers own amnesia and gradual realisation of her legacy is also well balanced, and makes for a sweet-natured story. 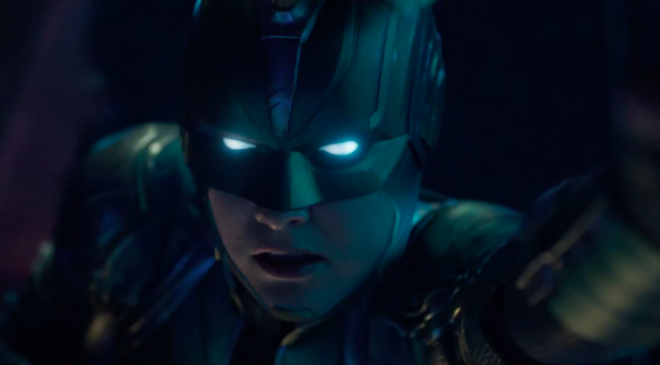 Led by an excellent Brie Larsen, who personifies the toughness and resilience of Danvers the pilot, and Sam Jackson’s wisecracking hard-ass Nick Fury, both Anna Boden and Ryan Fleck direct the film with class and grace. Action sequences feel well thought out, the exposition flows without hindering the pacing, and the plot twists, reveals and minor cameo-driven beats all seem to feel progressively more attuned to a core theme of revelation. The obligatory Stan Lee cameo is terrific, and the film pays an incredible and moving homage to the late comic impresario in the opening Marvel Studio’s logo sequence, whilst the film’s MVP is Danvers’ cat, Goose (renamed from the comic books, where he’s known as Chewie), who surprises in ways I wasn’t expecting. Supporting roles from Djimon Hounsou (reprising his role of Korath from Guardians of The Galaxy), Gemma Chan (as one of the Kree starforce snipers) and Annette Benning (who pulls double duty as both Dr Lawson and the Kree Supreme Intelligence) are all excellent in their own ways. Lashana Lynch, playing one of Danvers’ best friends, is up to the challenge of making a possibly throwaway character feel intrinsic to the story, and her relationship with Larson on-screen, while thinly developed late in the film, works well. 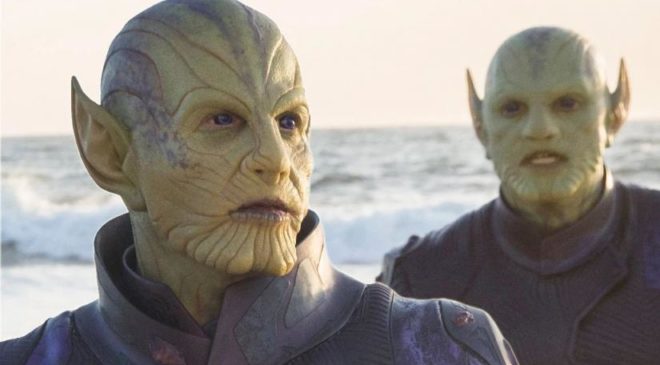 Easily the best on-screen talent award goes to Ben Mendelsohn, who has carved a career of late as something of an archetypal oozing, snarling villain (Rogue One, Ready Player One and most recently Robin Hood being formative works of his current screen renaissance) and as Talos he takes no prisoners with acerbic wit, dead-on delivery and a sense of both menace and heartbreak hidden beneath some terrific Skrull prosthetic effects. Mendelsohn imbues Talos with pathos, empathy and ferocity to achieve his mission – a mission, I might add, which puts him on a collision course with Carol Danvers – and the actor delivers a pitch-perfect performance in a role that by rights should have been singularly one-note. If nothing else, it proves that Marvel are getting better at developing their key villains. 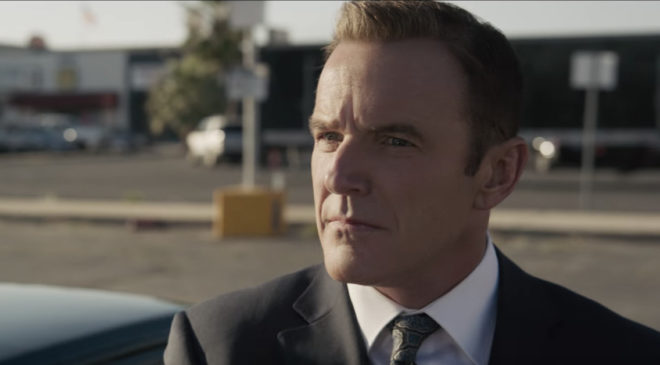 If I had one major criticism of Captain Marvel, it would be that the character of Carol Danvers feels almost subservient to the grander story. Her character growth and beats to backstory are eloquently depicted but at times her present internal conflict didn’t feel that convincing. Larson, as great an actress as she is, has the on-screen gravitas to bring the whup-ass when needed (and boy, does she!) but the emotional core of her character felt shortchanged a bit. The film’s climactic reveal, while surprising to us as viewers, seemed to be shrugged off by Danvers as merely another glitch in achieving her mission, and was too easily brushed aside. The continued gaps in her memory maintained a sense of confusion and anxiety over her allegiances, but as the gaps closed and the truth of her past was revealed, the character slipped too easily into the typical Marvel Glare And Stare, squaring up shoulders and preparing for battle. An entire paragraph on this might suggest to you that this problem was glaring and obvious and ruined the film: let me reassure you, none of those things are the truth, but it is worth noting that, for as good as the film is, I’m highly doubtful it will stand up to multiple rewatches. There’s a reason The Dark Knight is a better film than Batman Begins: the setup is done and you can just get down to the story. Personally, I’m thinking the eventual Captain Marvel sequel (and boy, there will be one if one particular line of dialogue is anything to go by!) will be a substantively better movie, not for what it has to deliver but what is able to. At least, this film feels like a prequel, feels too heavy-handed in saying “we’re setting up for other films to come” rather than singularly focusing on its own self, at times. 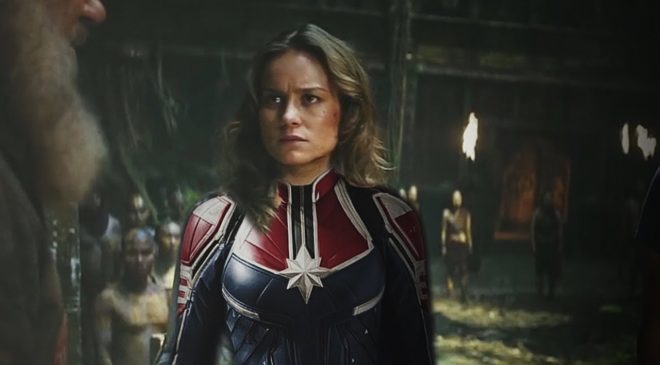 As competent and well-structured an origin story as Marvel has yet produced, Captain Marvel is sweetly fun, features loads of franchise lore and surprises within its 2-hour runtime (don’t forget to wait through the credits… Oh, Thanos about to get des-troyed!) and establishes another major player in future Phases to this enormous cinematic opera. It’s brisk, delivers rousing action and some nice Girl Power moments without pandering or emasculating the men involved, and perfectly sets up the expected throwdown in Avengers Endgame; Larson makes a great heroine, Jackson gives Nick Fury far more development here than in almost every other MCU film combined, and that damn cat has one of the funniest moments in any Marvel film so far. If only it didn’t feel so iniquitous in key areas, I’d have enjoyed it a lot more. Sadly, I don’t think I’ll be continuously revisiting this one, certainly not to the number afforded an Avengers, Guardians or Ragnarok; I can’t help but feel that Captain Marvel, when the release-euphoria dust settles, will remain resolutely middle-rung MCU.