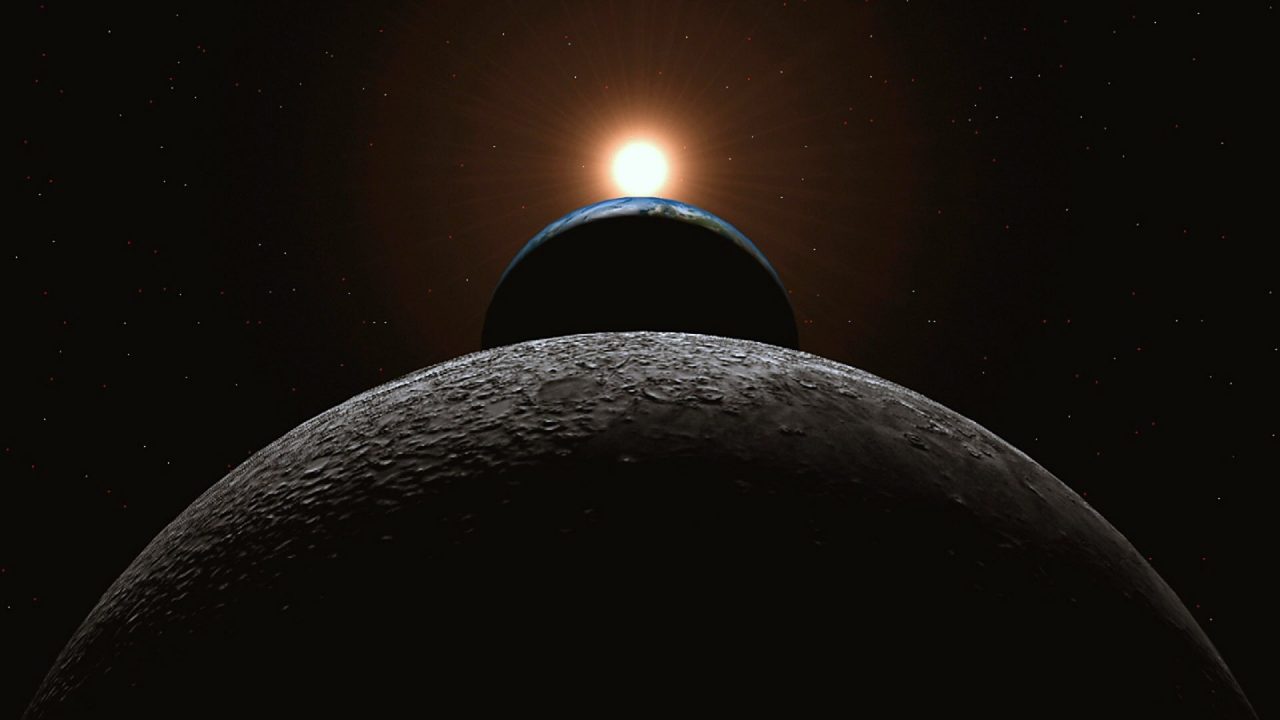 Towering, revolutionary, benchmark film from director Stanley Kubrick, 2001: A Space Odyssey ranks as one of the true all-time great examples of what is achievable with the motion picture camera. By today’s standards, this film still remains as powerful as it did the day it was first released. Back in 1968, when 2001 was released, man was about to step onto the moon, mobile telephones had yet to be invented, and the concept of interstellar space travel was still a pie in the sky idea touted by scientists as the next big advancement in human evolution. 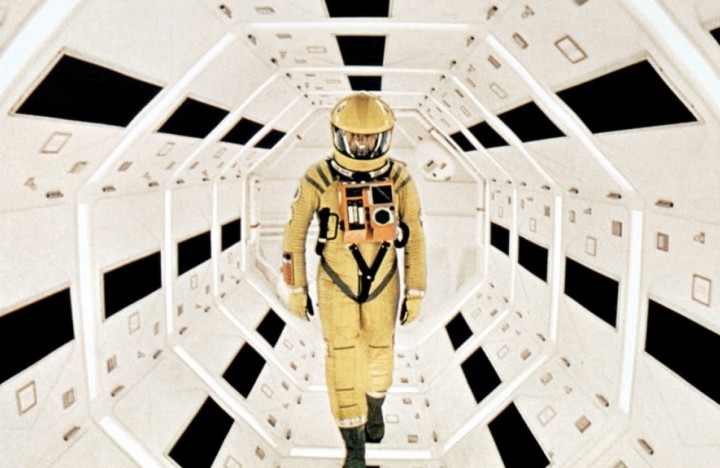 The film revolves around a mysterious black monolithic block, which appears at several moments through Earth’s history, including The Dawn Of Man, as well as in a future where human’s live and work on the Moon, and in satellites orbiting the planet. Apes, space archaeology and a giant computer inside a spaceship with murderous intentions all add us to one of the most divisive, epochal motion pictures of the modern era.

Coupled with Sci-fi genius Arthur C Clarke, Kubrick fashioned a glimpse into a realistic future, based on knowledge of space at the time, with a grace and ease that has given us some of the most quoted and ripped-off scenes in movie history. The opening titles, of the Earth in the sun’s glare, to the tune of Also Sprach Zarathustra, are among the most recognized of all cinema sequences, as is the moment one of the astronauts, Dave, (played by Keir Dullea) removes the components from HAL’s processor to switch the system off. HAL, as a film villain, has been copied and sent-up more times in film that you could want to count. The calm, malevolent voice is chilling in it’s placation of the crew, as it calmly sets about killing them in order to preserve it’s own life.

Often touted as one of those films you should be high on weed to watch to fully understand (due to the fact it came out in the 60’s, this is probably an outdated idea, but one that’s interesting nonetheless) 2001 remains a cerebral affair, lacking in sledgehammer subtlety; if you think it’s going to be a simple space romp like Star Wars, you’re in for a shock.

These days, for the casual observer, 2001 is a fairly dense film to try and enjoy; in fact, it’s not a film you can really “enjoy” in the true sense of the word. I’d class this as a film you need to “appreciate” more than “enjoy”, as it’s subject matter tends towards the more abstract, with a reliance on symbolism and iconography rather than dialogue. The dialogue is relatively basic, fairly straightforward material, yet it’s the context that’s the key here. HAL’s dialogue, while certainly containing a sense of menace within the context of the film, is fairly harmless. Yet, when those red lights of death flash up on the hibernation chambers of the crew of the Discovery 1, you just know something bad is about to happen.

And that single, implacable red eye is virtually unreadable, a symbol of automation’s unambiguous nature. The slow, deliberate space travel between Earth and the moon is significant within the context of this film, as most sci-fi films would have shown some super-rocket blasting it’s way straight into docking: instead, we have the careful precision driving of human astronauts who have to rely on absurd things like mathematical calculations and logic to obtain correct vectors and thrust-to-power ratios.

But aside from that, it’s the mind bending final act that confounds and divides most viewers. My wife, for example, despises this film as a waste of two hours of her life, an absurd film with no place in her list of movies she’s liked. Personally, I find 2001 to be a wonderful cinematic event, like looking into the very soul of humanity and our place within the solar system, within this cosmos. Yes, it’s deep, but not for everybody.

Just because a film is classified as a “classic” doesn’t mean every single person who watches it will subsequently enjoy or appreciate it. The films narrative is multi-layered, a kind of homage to the art of film, within the film itself. We commence at the Dawn of Man, progress to “not too far into the future” and then a decade or two into the future, as we follow the abstract appearances of the Black Monolith. The Monolith is never explained, never understood by anybody within the film, and to this day remains as elusively distant as it did when we first saw it. Unlike the similarly themed Space Probe in Star Trek IV (you know, when Kirk and Crew return to Earth to hunt for Humpback whales… it’s everyone’s favorite!) this Monolith comes to Earth with no known motivations. It’s not covered with alien writing, it gives no clue as to it’s origin or purpose. This is one of the myriad baffling concepts raised by Kubrick’s seminal film.

The final stargate sequence, with Dave the Astronaut seeming to fly through space and time at quantum speeds, ending up in a  room reflected as a segment of his own mind (I think!) and gradually aging, until he becomes a giant planet-sized star child, has been often deemed the work of a deranged, or possibly drug-fueled, mind: yet, it’s the symbolism that people still search for within the film that drives us crazy. Having no explanation as to the definitive answer to this question, has created a kind of mythology that surrounds the film and adds to it’s mystique. 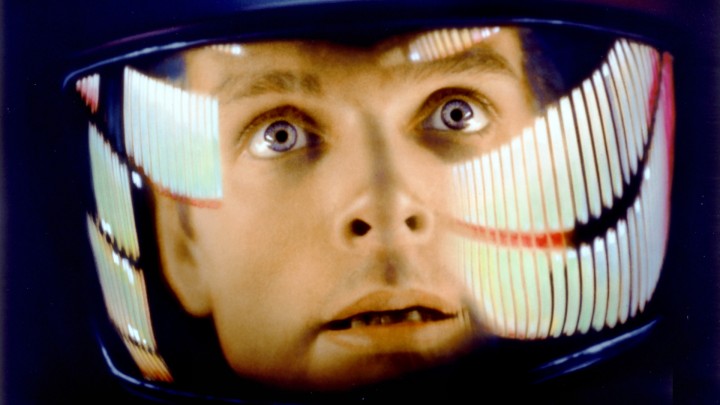 It’s our general inability to understand what Kubrick was on about, and perhaps a cynicism on our part requiring us to look for an answer when none exist, that have created this cinematic paradox. We like our films to have a point, a conclusion, and if these two things don’t happen we can’t handle it.But, since 2001 remains the most enigmatic of all Kubrick’s films, and while as obscure and strange as the narrative and point might be, it’s still a brave film to try and appreciate.

For the casual observer, this film will be a roundly unqualified disaster. For the more appreciative viewer, somebody who watches film and enjoys the subtleties and nuances it is able to offer, this will be a stunning investment of your time. It’s certainly not for everybody, yet it deserves appreciation for it’s technical and emotional accomplishment.

However, all the fluffery and smoke blowing over this film isn’t worth anything as far as figuring out whether 2001 deserves the title of a classic film. Most people in the know, you know, the kind who are often referred to as “they say”, would say that yes, this film’s quality is as indefinably classic as you can get, however, it’s subject and emotional distance are prejudiced to work against it.

2001: A Space Odyssey remains one of the pinnacles of a directors work, a masterpiece of cinematic storytelling and unconventional narrative. And yes, even though you may not “enjoy” this film in the truest sense of the word, there’s an undeniable power at work behind and in front of the camera here that is palpable, decades after its creation.