Geostorm is less a disaster film than it is a disaster of a film. After years of producer credits alongside destructo-maestro Roland Emmerich, Dean Devlin finally steps behind the camera for his feature debut as director, and if we’re measuring success by all tangible KPI’s, then Geostorm is a serious failure of every possible magnitude. Particularly considering Devlin’s status within Hollywood, which is even more galling. With a series of good-to-iffy visual effects, a wasted cast of top-line actors slumming it for a paycheck, and Gerard Butler’s inscrutably generic performance flopping hard against a backdrop of deliriously stupid weather events, it’s little wonder Skydance dropped a bunch of money on reshoots helmed by Danny Cannon (Judge Dredd). All to no avail, however. Geostorm is utterly stupid. Although most of the time, it is stupidly fun.

Geostorm is exactly like Armageddon, only without the memorable ensemble cast and with a poor man’s Bruce Willis in the lead. Butler plays Jake Lawson, a satellite designer (but of course) who created and built a global orbital defence against extreme weather, a series of linked weather-controlling satellites code-named “Dutch Boy”. After he is ditched from the project by his younger brother Max (Jim Sturgess – Upside Down), he is recalled three years later after a series of accidents apparently caused by a malfunctioning system. Sent back up into orbit, Jake leads a small team aboard to figure out the problems, whilst on the ground Max and his fiancee, Secret Service agent Sarah Wilson (Abbie Cornish – Three Billboards Outside Ebbing Missouri) try to work out who would be trying to cover up the problems. The film’s crux comes with the explanation that should Dutch Boy continue to fail it could trigger a series of increasing extreme weather storms across the globe simultaneously, a “geostorm”. There’s your ticking clock device, cue destruction and close calls, the inclusion of the American President (Andy Garcia, simply not giving a fuck), as well as a whole shipload of contrivance. 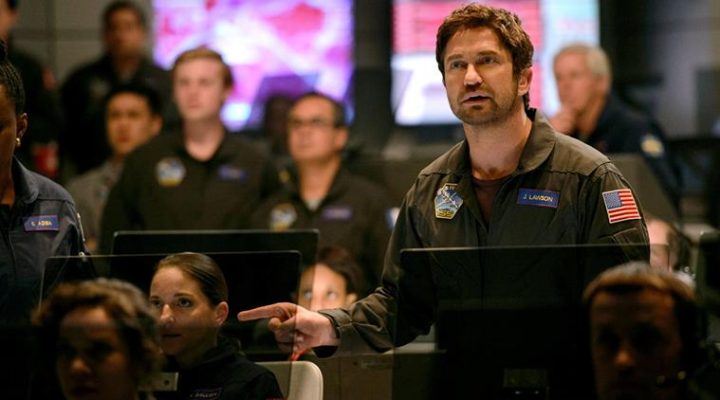 There’s certain expectations that come with any disaster movie, irrespective of budget. First, you need at least one good character, somebody you can root for and empathise with. This film has that. Second, you need at least a decent story to sell your effects and destruction on, otherwise you might as well call it Transformers and be done with it. Geostorm barely passes this test. Third, and most importantly, you need a reason to give a shit. Global destruction for apathetic cinema audiences are all well and good but you need to make us feel something about it. Popcorn entertainment doesn’t need to be vacuous inanity; Geostorm is vacuous and preposterous but despite being generic and incredibly cliched, I found myself having a clumsy, ineptly developed good time with this, although as wildly attention-seeking as Geostorm’s bombastic nature is, not once did I give a crap about the people in this film (….gestures to everything). 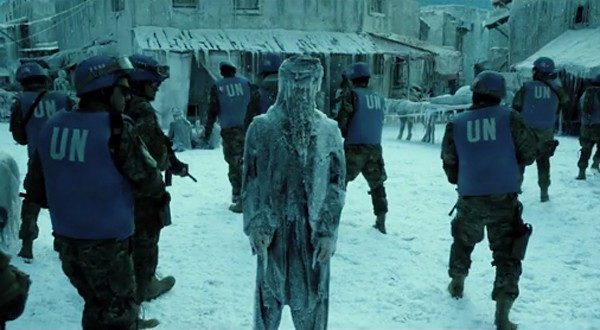 The film plays like a silly political espionage thriller filtered through a Dan Brown network of subterfuge and intelligence gathering, intertwined with the gallivanting outer-space tomfoolery of those 90’s asteroid films where spacesuits can perform extraordinary manoeuvres in zero-g and communications in terrabytes of data that transmit in microseconds. No, it doesn’t make much sense, and the film’s sense of humour briefly skirts being too serious for its own good, but Devlin crafts a workable glimmer of escapism that allows things to function as a pleasant diversion. The script is conspicuously perfunctory, neither daffy nor too tone-deaf to the carnage inflicted upon the planet, with characters that function simply as exposition outlets and a series of laughable weather events – boulder-sized hail in Tokyo, an insta-freeze blast of cold in Rio De Janiro, destructive gas-mains in Hong Kong, mega-floods in Dubai – that ratchet up the ticking clock of the impending geostorm. Naturally, the technology exists for Dutch Boy’s computers to predict to the millisecond the moment a geostorm will manifest. Heh.

As the stakes rise, the ludicrous plot amps up with typical Hollywood straight-faced alacrity, Butler’s square-jawed machismo overflows with abandon, while Sturgess and Cornish keep the ground-based thrills coming as they invariably have to kidnap the President to save the day. It beggars belief, naturally, but Strugess, Cornish and on-screen President Andy Garcia pull it off. Ed Harris, who appears as the so-not-obvious double-crossing bad guy, simply plays every bad guy character he’s ever played in one go, big woopee. Car chases, gun-battles and inner-city “running from destruction” comedy are the order of the day for this scatterbrained plot, while Butler, orbiting high above, must contend with gravitational deprivation, a lack of oxygen outside their tin-can in space, and calamitous infrastructure failure. In spite of contrivance, Devlin manufactures at least a modicum of excitement through editing, if not performance or story. The chases and fights and stunt sequences are all competently chopped by the likes of Hollywood stalwart Chris Lebenzon, alongside Ron Rosen and John Refoua, trying to hide the film’s silliness in slick style (it might work for the average film pleb, but not this haggard veteran of many a screen debacle) while Lorne Balfe’s bombastic score accompanies the destruction. 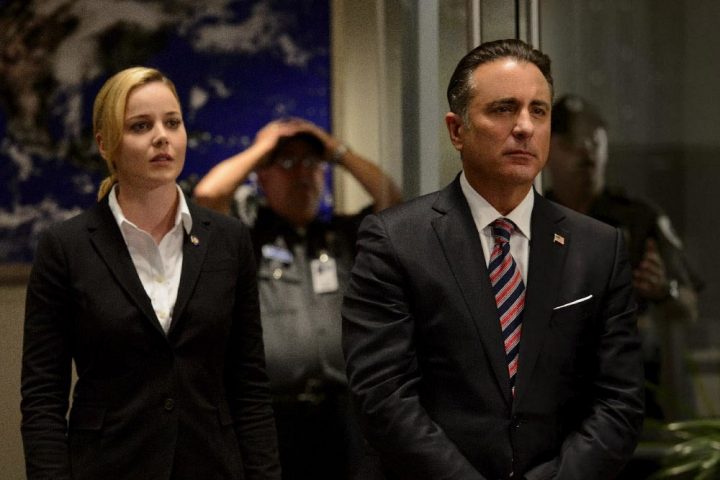 And let’s face it, you’re here for the wreckage of humanity. Geostorm delivers requisite moments of iconic landmarks (although somewhat less than iconic than Devlin-produced Independence Day achieved) being obliterated with an abundance of effects both excellent and poor. Uniquely, the outer-space effects, such as the satellites, spaceships and general “out-the’-window” glimpses are the best thing about the film, while the ground-based weather effects – particularly the digital ones – waver between average to poor. Stretching the film’s hefty budget into a variety of world-wide locations, a gamut of expensive sets (Dutch Boy’s interior control station is expansive indeed) and the crowd-pleasing sequences of destruction means less time is spent developing character we care about, which means Geostorm feels too B-movie than it ought. Still, at least it’s not a shit as London Has Fallen. 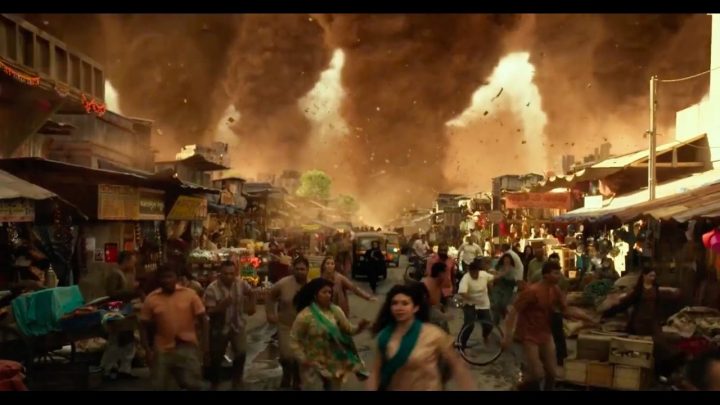 Geostorm is seriously problematic on so many levels, serious film critics will (and have) tear it to shreds mercilessly. I can’t deny the film is irredeemably silly, borderline offensive in asking the audience to believe anything that’s going on, but there’s some fun to be eked out here if you try. In following the prototypical disaster film structure – including the possible noble sacrifice of the leading character, as well as the continued Hollywood infatuation with the “protect the President at all costs” motif – Geostorm hits all the beats you’d expect it to beat, and it does so with a degree of unsubtlety impossible not to laugh at. From it’s “narrow escape for a hapless victim” to the mandatory “exploding building” (a la the White House in ID4, here replicated with Devlin’s destruction of a massive convention center in Orlando, Florida), there’s few disaster flick cliches Devlin isn’t afraid to throw in, although the ones where the film’s hammy bad guys all meet their end come with a solid serving of hoo-rah and fist-pump. 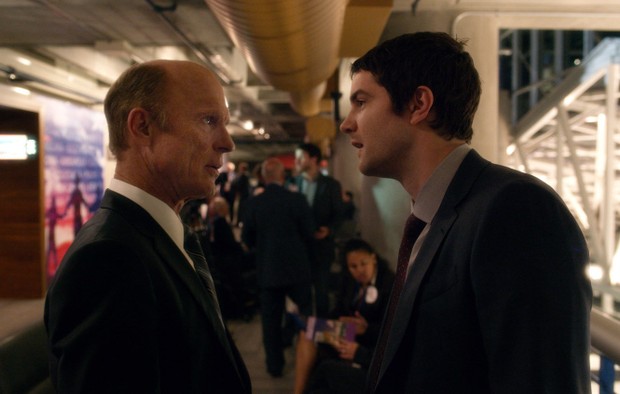 Yes, for all its contrivance and artifice, for all its skimming of logic and scientific possibility, for all the half-assed subplots and action-film requirements, Geostorm succeeds where Michael Bay continues to fail. It’s okay to make a shitty action film like Geostorm, because nobody expects greatness in everything. Geostorm is the Happy Meal of disaster films. It’s not the healthiest, and you’ll forget it as soon as you’ve watched it, but it sure as shit does what it says on the box and that’s something you can’t argue with.