Feudalism is easily my favourite period in European history, specifically the relationship between the nascent England and the battle-hardened Scotland, typically personified by the tales of William Wallace and King Edward I, combative personalities of the early 14th century and writ large on the silver screen with 1995’s Oscar-winning film Braveheart. Well, Wallace is nowhere to be seen (sidebar: you do see his arm in an early moment) in Outlaw King, a film focusing on Scottish lord and king Robert The Bruce, here played by Los Angelino actor Chris Pine, who fought not only Longshanks but also his son, the Edward Prince of Wales, for the right of the country to self-govern as a nation in its own right. Outlaw King works almost as a semi-sequel or parallel narrative to Mel Gibson’s populist action film, muddied and gritty and incredibly graphic with its violence, at times struggling to escape the shadow of cinemas greatest warrior Scot and stand alone as a definitive character study in its own right. That, and you catch a glimpse of Chris Pine’s penis, so have at it. 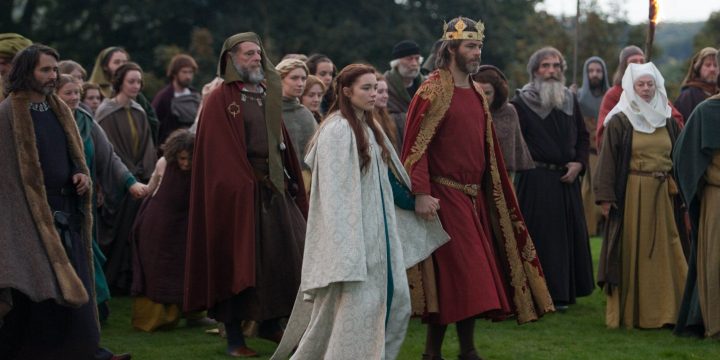 Set immediately in the aftermath of the Scottish surrender to Edward I (Stephen Dillane) at Stirling in 1304, the lords of the nobility, including Robert Bruce (Pine – Wonder Woman), John Comyn (Callan Mulvey – Batman V Superman: Dawn Of Justice) and the King’s son, the upstart Prince of Wales (Billy Howle – Dunkirk) are finally at relative peace. The English king has defeated his nemesis following eight bloody years of war, and the Scottish lords squabble among themselves over their birthright to the throne. Robert, in an arranged marriage to young Irish noblewoman Elizabeth de Burgh (Florence Pugh – Lady MacBeth), sets off another war with England after he murders his chief rival for the Scottish crown and instigates combat with scourging English forces in the area. Gathering his forces, who are swiftly routed by the far superior army of the British, Robert and his small posse of rebels take to the highlands to concoct their final push to reclaim Scotland as their own. Alongside Robert fights James Douglas (Aaron Taylor-Johnson – Godzilla), a homeless lord, and Robert’s various brothers and friends, all of whom swear allegiance to the proud young king. 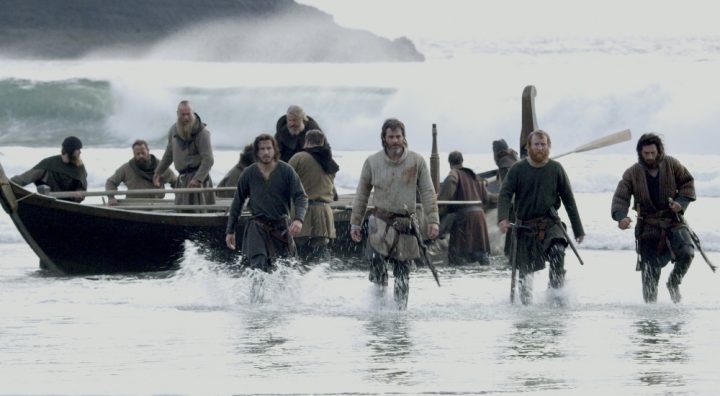 If you put any stock in tabloid rumours, the journey of Outlaw King from the page to the screen was a bumpy one. Netflix’ investment in the film was reportedly somewhere over $120m, a rather sizeable gamble for the streaming service considering the subject matter and the lack of bankable stars outside of Star Trek’s Chris Pine. Pine offers a valiant but thoroughly inadequate portrayal of Robert, his crystal blue eyes and well-groomed facial hair at odds with the grimy, sodden landscape on which he acts; the screenplay obviously loves the setting and enormous roster of players at the disposal of the story, but at no point do we latch onto the character with the same sense of urgency or empathy as we did Gibson’s William Wallace. I know, comparative examples aren’t really how good critique should work, but it’s an easier deconstruction of the film’s woes than explaining in detail why the film sucked. 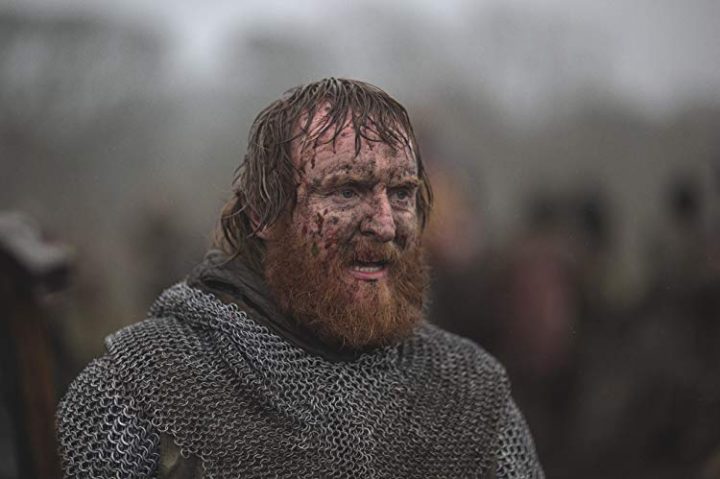 Okay, it didn’t suck, not entirely. The true legacy of the period is largely unknown in exceptional detail thanks to the passage of time and – to quote Braveheart’s opening dialogue – history being written by the winners, so I’d wager a fair degree of poetic license was used in bringing this story to life in terms of accuracy. License is okay so long as you honour the period, and I think Outlaw King does that, just not with any complexity aside from its brutal violence and beautiful cinematography. 14th Century Scotland looks positively radiant, something at odds with the bloody guerrilla warfare men were engaged in at the time. The film tends to focus on the battles (a number of which were excised from the final cut by director David Mackenzie, which boggles the mind at just how epic the original version of this film must have been!) and the byplay between Scots and Brits throughout, and I was surprised at just how funny the film was considering what was occurring on the screen. Several jet-black jokes and humorous moments break up the masculine monotony, and of all the participants it’s Florence Pugh’s wily Elizabeth, second wife of Robert, who takes the chocolates for MVP. 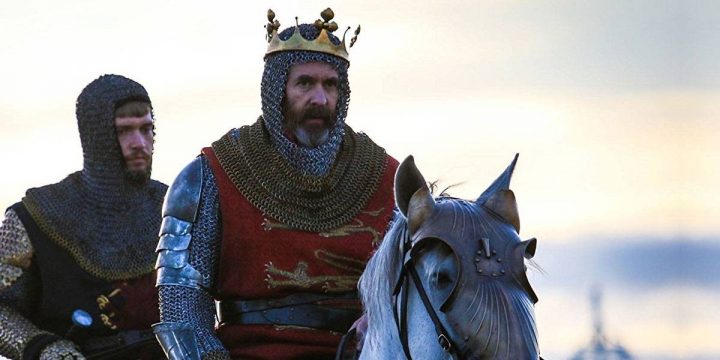 But the film feels empty, a vessel of infinite beauty containing intangible vapour of story, a flavourless leading character surrounded by a gamut of top-line acting talent (including Tony Curran, Sam Spruell, and James Cosmo as Robert’s father) and some of the most wonderful filming locations in the British Isles. Pine’s work as Robert can’t muster a genuine emotional state, his chiselled looks and “movie star” charisma buried beneath an admittedly wafer-thin character as the screenplay would give us. I guess when you have no less than five names credited to writing the film things can feel a little disjointed, a little less smooth. For all that creative energy, the film feels vacant, characters slipshod and incapable of coming to life on the page: in almost every scene bar a few, the film feels more like a high-budget cosplay party than an actual feature film. Poor Pine’s role seems more reactive to the plot than proactive, continually unable to participate in it thanks to an indifferent motivation for his character. I never felt like I knew Robert The Bruce after this, never got into his head to work out what made him tick. Fighting for country? Sure, everyone can do that. Pride? Honour? Some sense of revenge? The film is built on a theme established in other movies, never generating its own motivation for propulsion or reason. 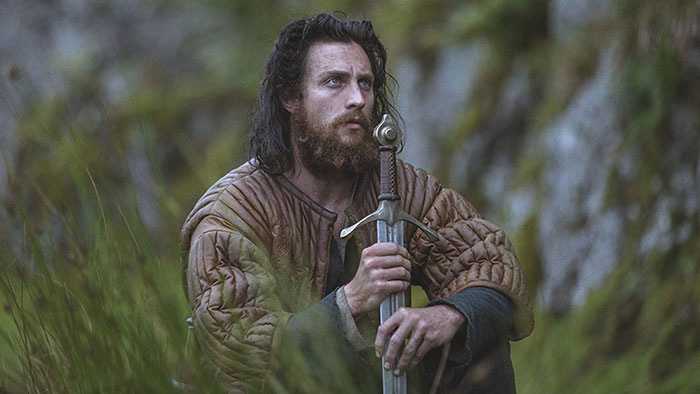 Sadly for Outlaw King, despite its thunderous action and lavish production values, the heart of the film is absent any sense of depth or genuineness. Pugh, as mentioned, delivers far more with her character than is written on the page, her sense of innocence and feminine strength drawn from subtle glances, on-the-nose dialogue and a playful post-modern evocation, while central villain (of which the film has more than a few) the Prince Of Wales is given histrionic gravitas by Billy Howle. Howle, in trying to be the teeth-gnashing villain of the piece ends up like poor Eddie Redmayne in Jupiter Ascending: a dire, laughable baddie rancid with impotence and lamenting in iniquity on the battlefield, a sudsy, overwrought character bereft of subtlety. He’s aided somewhat by Stephen Dillane’s charismatic turn as Edward the Longhshanks (previously spotted in the guise of the late Patrick McGoohan in Braveheart, a far more sinister portrayal in my estimation) and the dullard courtiers who surround them. Sam Spruell oozes period villainy as a henchman of Longshanks’, although he’s never given quite enough to do other than gnash, slash and crash. 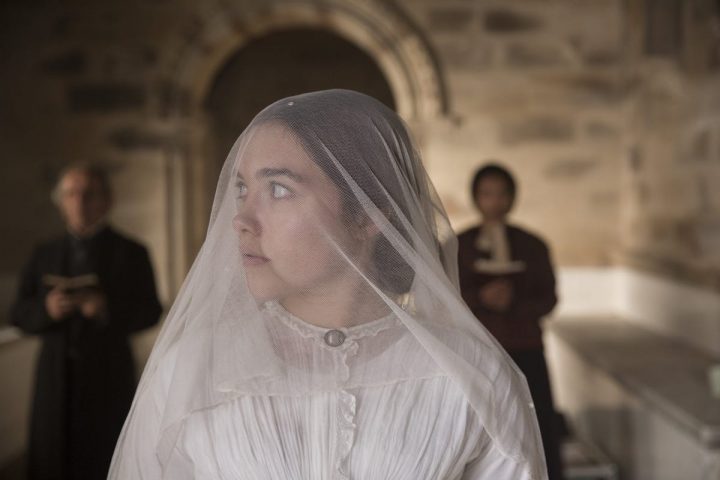 Almost salvaging the entire thing is David Mackenzie’s incredible direction and the cinematography of Barry Ackroyd (Captain Phillips), both of whom give the Scottish landscape an unearthly, almost Tolkien-esque languidity. It’s beautiful countryside, a postcard-perfect backdrop for the bloody carnage to ensue, and the film’s visual look is, in a single word, sumptuous. You can see where every dollar was spent, and it wasn’t the catering. Costume design, action sequences, lighting and bloody warfare have never looked so stark against the greenery of the highlands, and Outlaw King should surely garner some favour come awards season in its technical categories. Tony Doogan’s score is effective and haunting, but echoes too much of Horner’s Braveheart work for my liking – this isn’t his fault, but rather my own preconceptions of what I expected, and I guess I did get what I expected.

Gosh darn it, I really wanted to love this movie. I really, really did. But I didn’t. It’s an earnest, heart-on-the-sleeve attempt to sieve out the fantasy and depict a far more realistic screen presence for one of Scotland’s most revered figures, although Mackenzie’s direction is adversarial when it comes to fiction and fact. Despite a leading character with barely a cogent personal arc or motivation other than to simply react to the actions of others, plenty of bruising sword-on-flesh action, a delicious glimpse of Pine’s prick in the water, and a ferociously high octane directorial style, Outlaw King is mildly disappointing. It has its moments, and the fits-and-starts sequences do feel somewhat clumsily stitched together well enough to make it at least coherent overall, but I found myself wanting so much more from the story. Robert The Bruce is a fascinating historical figure, and aside from picking the eyes out of the greatest hits of his known adventures, the film’s inability to create a genuine sense of his character left me languishing. A well mounted production undercut by a script of indecision and an imbalance of character arcs that never quite rights itself.