Director :  The Wachowskis
Year Of Release :  2015
Principal Cast :  Mila Kunis, Channing Tatum, Eddie Redmayne, Sean Bean, Douglas Booth, Tuppence Middleton, Gugu Mbatha-Raw, Terry Gilliam, David Ajala, Maria Doyle Kennedy, James D’Arcy, Kick Gurry, Bae Doona, Ariyone Bakari, Tim Piggot-Smith, Edward Hogg,
Approx Running Time :  127 Minutes
Synopsis:  A young Earth woman discovers she’s the reincarnated Queen of a wealthy space empire.
What we think :  Incredibly detailed sci-fi opus from the Wachowski’s is a hell of a lot of stupid, silly fun. While much of it doesn’t make much sense, and Mila Kunis’ character has an egregious problem with her transition from Earth girl to Queen of a galactic business empire (and not in the way you think, either), Jupiter Ascending is full blown creationism from the minds of two of Hollywood’s brightest talents. If only this film had made more money (or, for that matter, come out when originally marketed for), we’d have plenty more big-budget attempts to do similar things: if anything, Jupiter Ascending is a terrific-but-flawed work of fiction that should never have stumbled when it did.

Apparently, the Wachowki’s think humanity is only good for spare parts.

It’s a shame more folks didn’t enjoy Jupiter Ascending. Many critics were particularly unkind to the film, even though in many respects they were right in saying it had narrative issues and several giant blank spaces where story is supposed to go. Science fiction, particularly good science fiction, is notoriously difficult to pull off (George Lucas dropped the ball badly with his Star Wars prequels) for fans of the genre – notably a hardline bunch who don’t suffer fools gladly – and while I’d say this film isn’t something people will look back on with the reverence of, say 2001: A Space Odyssey – or even the aforementioned Star Wars, for that matter – it’s still a worthwhile venture into grand adventure and thrilling, occasionally obtuse high fantasy.

Like many fantasy opuses, Jupiter Ascending’s central premise involves a character who is unaware how “special” they are to the world/universe, and must undertake a transformation from innocent to hero to save themselves/their family/the world/the cosmos, usually with the help of one or more sidekicks and the occasional traitorous accomplice. The Wachowski’s, best known for their Matrix trilogy and the high-falutin’ Cloud Atlas, reach into their grab bag of creative excellence and strive for the stars. Do they reach the lofty heights they aim for? Nope, but by hell it’s a valiant effort. Jupiter Ascending’s hero-from-nothing story isn’t anything new, and along the way plenty of cliches attach themselves to the narrative (notably, the central character’s apparently inevitable romantic liaison with the leading man), but the Wachowski’s do enough visually to make the rather generic story seem to come alive. 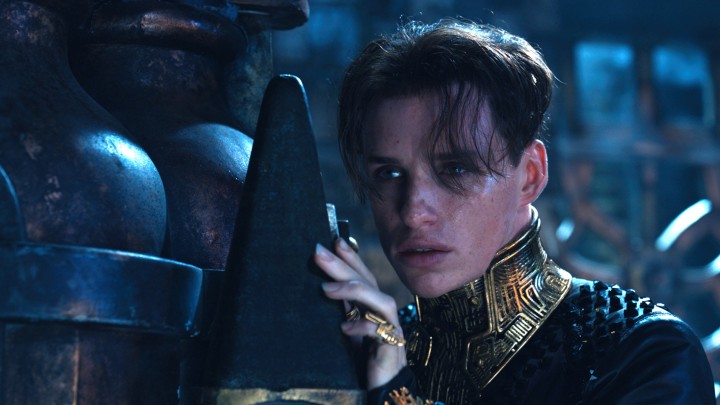 Mila Kunis stars as Jupiter Jones, a young Earth woman working as a cleaner for her Russian family in Chicago. After being rescued from an alien assassination by a human/wolf hybrid named Caine Wise (Channing Tatum, sporting Mr Spock ears), Jupiter learns that her fate is attached to that of a powerful ruling family known as the Abrasax, who own not only Earth but many other planets in the Universe. Their business empire is built on “seeding” a planet for eventual harvesting of the human population, where they then transfer genetic code to the ruling elite to make themselves many thousands of years old. Jupiter contains the DNA of the Abraxis’ one-time matriarch, who was murdered many years prior. The surviving Abraxis siblings are all vying for control of their inheritance, and seeking to expand it. The most controlling is elder sibling Balem (Eddie Redmayne), who sees his brother Titus (Douglas Booth) and sister Kalique (Tuppence Middleton) as obstacles to be defeated. Helping Caine protect Jupiter from the machinations of the Abraxis’ plans, is Stinger (Sean Bean), a former soldier friend who is half human, half bee. 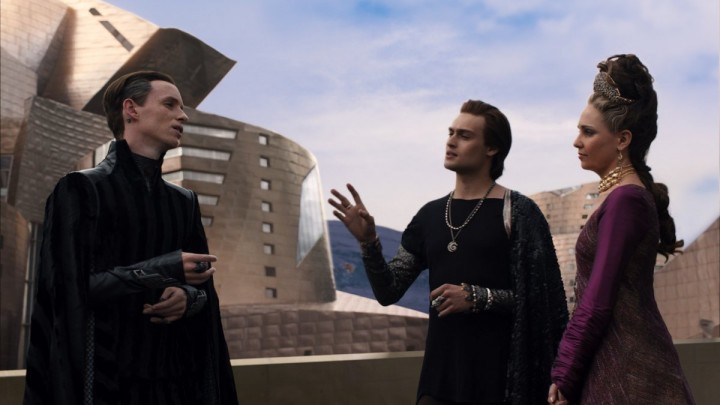 It should be noted that even when its story stumbles with exposition (or lack of, I should say), Jupiter Ascending is easily the most visually splendid film in recent years. From a production and design standpoint, I don’t think I’ve ever seen a new “world” be created as intricately or as believably as this was, with the exception of James Cameron’s Avatar. Within this, part of the film’s narrative problems arise. The world the Wachowski’s have created is so dense, so filled with unseen or unexplained backstory, the narrative hoops Jupiter jumps through will often confuse the audience. Gaps in plot seem to indicate that explanatory footage might have been cut prior to release, and if so this seriously hampers the believability of Jupiter’s arc. 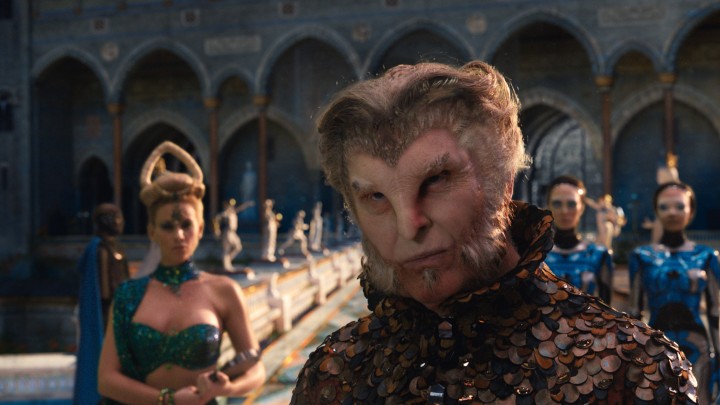 Jupiter is a forthright, yet undemanding and somewhat insipid character, although Kunis does her best to give her plenty of emotive strength. You get the sense that she’s supposed to be a character who thinks she’s destined for something greater (which isn’t shown, but it feels that way), and when Caine does arrive to save her from alien assassination, her reaction to the revelation that Earth isn’t alone in the Universe is met with what can only be described as outright indifference. Revealed to be a queen, Jupiter is entirely nonchalant. Flying through space on giant crafts would astonish, nay awe, most, but Jupiter meets this with an matter-of-factness that belies her character’s emotional and intellectual state. This imbalance with Jupiter as a character makes her a frustrating heroine to embrace as a viewer. What are her motivations for doing what she does? What’s her reasoning for her blank-slate indifference to what’s going on? 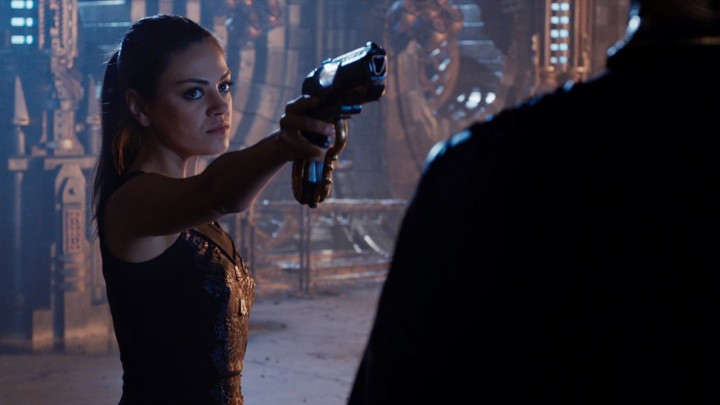 Jupiter aside (which is harder than it sounds, really), Channing Tatum’s Caine Wise is a remarkably bland sci-fi hero who never demands much of the audience beyond being a prototypical square-jawed rescuer. I counted no fewer than four rescues of Jupiter by Caine – I know we’re all fond of a damsel in distress, but seriously, they just repeated the same three or four story beats and called it a day, just swapped out the green-screen backing. And Eddie Redmayne? Obviously taking his cues of overacting from Gary Oldman’s The Professional (which Oldman can pull off, but Redmayne cannot), Redmayne’s idiotic Belam Abrasax portrayal is utterly contemptible. Quiet and menacing doesn’t work when you have an utter lack of resolution behind your motivation, and unfortunately, Belam is just a simple “jealous, power-hungry child” caricature, and lacks a sense of genuineness. Sneaking into the film is a cameo by Monty Python alum Terry Gilliam (probably the film’s best role!), Tuppence Middleton (who spends more time in “old age” makeup than as herself), and Douglas Booth, all of whom service the script and the Wachowski’s visual demands, but little else.

That’s the problem with a lot of this film; it lacks a sense of believability. Most of the characters have limited development, and even those that do somewhat fail to execute it with any emotional truth. That said, Jupiter Ascending is closer to Luc Besson’s The Fifth Element than it is anything the Wachowski’s have given us before. Kudos to them for at least trying to do something new and exciting visually, even if the story lumbers more often than not. 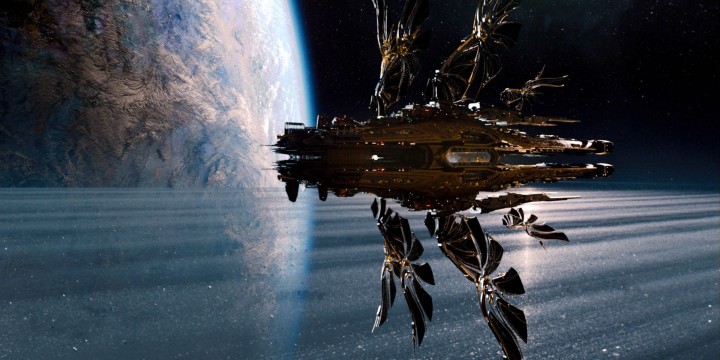 Where Jupiter Ascending arrives as a cinematic success is in that world building, and in its terrific visual effects. Caine’s rocket boots, allowing him to “skate” through the air and perform all manner of gravity-defying feats, are a dynamite conceptual feat, and executed with suspenseful exactness from Team Wachowski. The film’s enormously wide-screen galactic effects provide a lavish, sumptuous canvas on which to witness these feats of derring-do, and from the small to the large, the CG involved in this movie is integrated perfectly. From the deepest reaches of space, to the refinery-set atmosphere of the planet Jupiter, where the film degenerates into an “explosions, collapsing gantries and last-gasp appearances of the Bad Guy” affair that sucks all the life out of things, at least Jupiter Ascending looks fabulous. 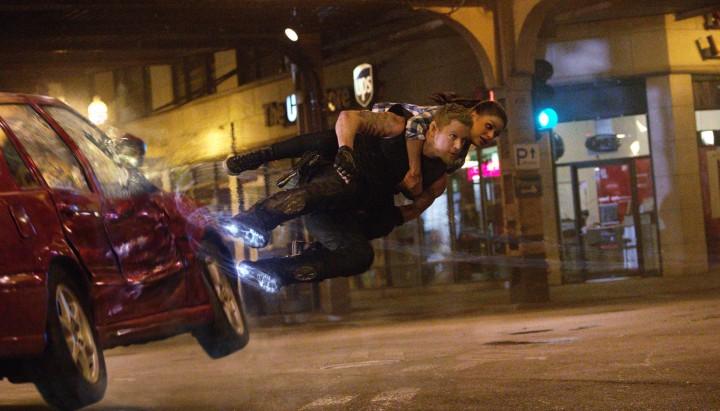 Okay, I’m gonna be brutally honest here. Jupiter Ascending isn’t a great film, and at times I groaned in dismay at several creative missteps taken with both character and development. But I still had a blast with it, purely as escapist fun. It’s entirely dissimilar to the Wachowski’s intellectually dense Cloud Atlas, a thorough left-turn into pulp-fiction space opera fantasy that wavers, wobbles, but still remains thrilling and occasionally fun. It’s not gonna be everyone’s cup of tea, but if you’re prepared to just go with it, you may just have a smidgen of stupid, silly fun along the way.