Take it as read that every film review involving Mel Gibson is always going to start with something along the lines of “everyone’s favorite Hollywood racist”. I’m no different – Gibson’s personal life, however, shouldn’t be an indictment on his early, pre-anti-semitic-rants or pre-abusive-spousal-relationship career. Braveheart, the film which launched Gibson into the Hollywood elite of both actor and director – and Oscar winning one at that – remains a personal favorite of mine, not due to anything other than its inherent nobleness of intent or its grandiose “blokiness”, a masculine, testosterone-filled epic that, if you’re a man not crying by the end you’re a liar, is as effective now as it was back in the mid-90’s. 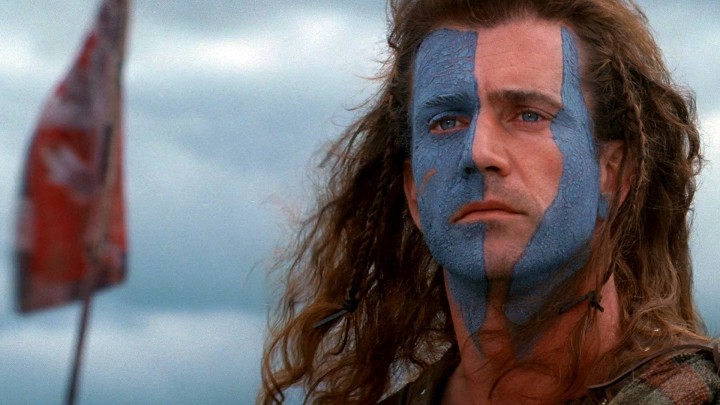 Gibson plays legendary Scottish rebel, William Wallace, who history would have us remember as a man who fought for his country’s independence from the regime of British monarch Edward Longshanks (Patrick McGoohan), late in the 13th Century. Longshanks uses political advantage between the Scottish nobles to keep them from banding together and going to war against him, although as Wallace, spurred by the murder of his new wife, Murren (Catherine McCormack), begins to unite the warring clans to fight a common enemy, Longshanks must send more and more of his troops north to fight to maintain control. Longshanks’ intended daughter-in-law, French Princess Isabella (Sophie Marceau), is used by Longshanks as a bit of a honey-trap, while his friends, such as Hamish (Brendan Gleeson) ensure he keeps focus on the mission to rid Scotland of the English.

If we’ve learned anything from Braveheart, it’s that 13th Century life was brutal, with a capital B. Unsurprisingly, due to a lack of medicine, warmth, electricity, food, and the constant battle against an invading force, Scottish people tended not to live too long back than, and if they did, it was pure luck. The terrain was harsh, the life was harsh, and English troops ensured it didn’t get any easier. Naturally, war was equally terrible, if not for the fact that the majority of it was hand-to-hand stuff, not the drone-from-a-continent-away crap we have fun with these days. Braveheart is a story of love, one man’s passion for his country and for his family – in this instance, his wife’s death at the hands of an odious British officer intent on keeping the locals pacified via violence. Set within this muddy, sloughy landscape of beauty and horror, Mel Gibson’s fanciful (and largely inaccurate) take on William Wallace bears the hallmarks of a story more interested in graphic carnage than in historical resonance.

With a screenplay written by William Wallace’s real-life descendent, Randall Wallace (who would go on to direct Gibson himself in the war film We Were Soldiers), Gibson’s widescreen storytelling is masterfully potent in thunderous action and intricate human failures; although Wallace is portrayed as a vastly intelligent warrior-savage, who manages to outsmart both the entire English army but also his own fellow Scottish warlords, the liberties Gibson takes with just about every facet of his production indicates that, like much of Hollywood, it’s all smoke-and-mirrors. Anachronisms can be argued until we’re blue in the face (pun intended) but the fact remains that on even the most superficial level, Braveheart’s desires don’t run that deep. Gibson portrays Wallace as the ultimate barbarian hero: he’s the noble the other nobles aren’t, he’s a patriot above everyone else, and somehow the sacrifices he makes are that much more intrinsically personal than anyone elses, even his friends. This isn’t so much a fault of the film more than it is an observation, for I think Gibson is canny enough to know when to just let the story run wild, enveloping the viewer in his own fantasy-Scotland.

The basic plot is a revenge saga, as Gibson decides he’s had enough of colonial British rule, and sets about waging a guerrilla war with the embedded troops in his country. Naturally, his kinsmen don’t share his anarchist ways, and they too try and stop him. Although, in the end, they come around to his way of thinking (or do they…?). As the film broadens from a revenge drama to a rebellious patriotic epic, Bravheart is careful not to let Wallace’s natural charm and eloquent monologing get in the way of the focus of the story – it’s a love story between a man and his country. Ferocity in battle is indicative of the savagery of the time, and Gibson’s flair for blood and gore is at the forefront of the film’s climactic battle sequences, of which there are about three. Limbs and bodies are torn asunder in an assault of arrows, swords, rocks, shields and any manner of hand-to-hand combat you can imagine, as Wallace and his homies take the battle to the more skilled and numerically advantaged English forces, only defeating them through guile and local knowledge. 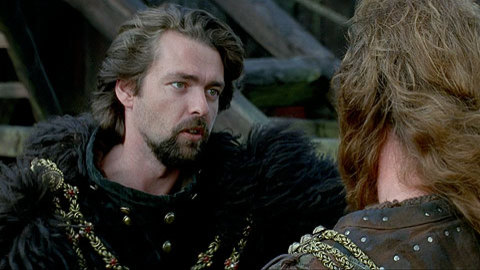 Although it’s possibly the least circumspect biopic to come out of Hollywood in a generation, Gibson’s pedestal-placement of William Wallace cannot be understated. Wallace is personified as an early human superhero, manifesting his way into legend through acts of bravery and insanity – all traits Gibson is well versed at on the screen, since he’s played so many characters of this ilk – and in his performance, Gibson holds nothing back. Wide eyed and snarling, Gibson “oots” and “ayes” his way through Wallace’s story, his laughable accent not a patch on those of his actually Scottish co-stars. It’s a magnetic role, and a defining performance by Gibson, casting himself in the spot as well as helming the film behind the camera. I mean, it’s hard not to get caught up in it all when Gibson’s exhorting his troops from horseback that they’ll never take our freedom. Shivers.

As much as the film goes for shock value (the killing of Murren is nowhere near as violent as the reprisal by Wallace on the British magistrate – the late Malcolm Tierney – who kills her) and surprises (Angus Macfadyen’s Robert The Bruce, after whom the title “brave heart” is really supposed to be named given his internal conflict in doing what he does, personifies the civil disharmony of the Scottish nobles) it’s the film’s potent conclusion that hammers home just how effective Gibson is as a director. In spite of scoffing at real life and documented historical accuracy, Gibson draws even the hardest man to tears with his mournful, triumphant finale. Wallace, captured and tortured by the English, has sown enough discord and upheaval into British monarchy that his final breath – before that of Longshanks himself – is a heart-rending moment of masculine agony and torment. Not to mention the Gibson-less coda, with charging Scottish soldiers “doing it for William Wallace”, to soul lifting effect. I admit, even now, that moment makes me choke back a lump. 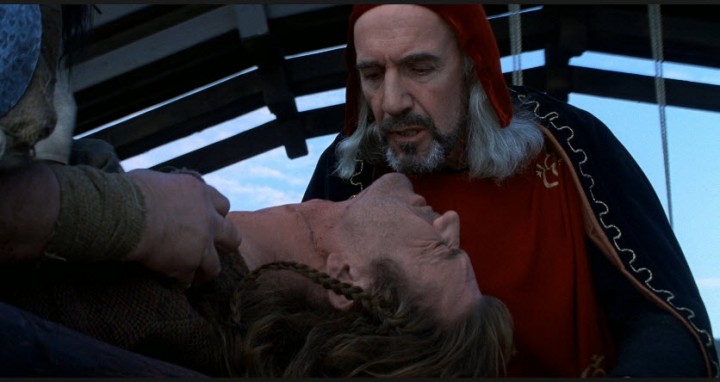 The cast are superb, from Gibson on down. Patrick McGoohan is absolutely vile as Longshanks, and as great a modern screen villain I don’t think you could ask for. McGoohan is terrific, a hateful, spiteful, ingeniously wicked King Edward I (if not entirely accurate, however) who serves as the film’s Bad Guy from the decree of prima nocta, to his last withered breath. Brendan Gleeson is hilarious as Wallace’s best mate Hamish, as they knock about Scotland together killing Englishmen. And everyone remembers David O’Hara’s “Mad” Irishman, who is in it for the fun of it. French actress Sophie Marceau, who I’d never heard of until this film (she would later appear as a Bond girl in The World Is Not Enough… ugh) is just stunning as Princess Isabella, who has her eye caught by Wallace’s brutish charm, and who also undermines Longshanks’ plans for Scottish domination in her own way.

As a technical achievement, Braveheart sings it song loudly. James Horners aching, thunderous score, featuring Irish pipes (ha! another anachronism!) and a swelling orchestral accompaniment that drags the emotional heartbeat of this film from even the craggiest if viewers. The film’s stunning Scottish highland landscapes anchor the movie in reality as much as it can be, with John Toll’s cinematography rightfully winning the Oscar for his lensing here, while the staggeringly mounted battle sequences are still as jaw-dropping and “we did it for real” pre-CG magnificent as ever. 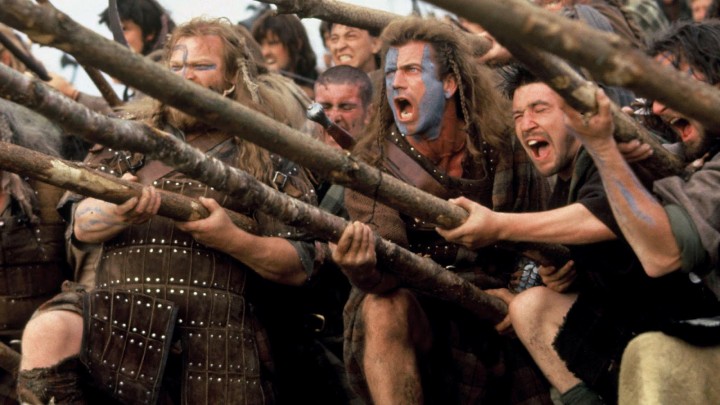 But in spite of everything historically wrong with the film, it snagged Best Picture for the 1995 Oscars, and also hooked Gibson a Directing gong (as well as the film receiving awards in makeup and sound editing); it’s status as a legendary film is assured, and although the lens of history may not have been as kind to the film in the years since, as a rollicking adventure film that slashes-and-burns through truth like Wallace did through the English, there’s little one can say that hasn’t already been about the movie’s iconic pop-culture savvy. If you’re after a film that makes men weep, Braveheart is it. Through its sheen of plaid masculinity and wavering accents, coupled with the bravado of man-love resplendent in the bonded-by-war narrative threaded through the movie, Braveheart is an affecting, effective example of modern Hollywood blockbuster entertainment that delights in itself without pandering to stupidity.