Principal Cast : Gal Gadot, Chris Pine, Robin Wright, Danny Huston, David Thewlis, Connie Nielsen, Elena Anaya, Lucy Davis, Saïd Taghmaoui, Ewen Bremner, Eugene Brave Rock, Lilly Aspell, Emily Carey.
Synopsis:   Before she was Wonder Woman she was Diana, princess of the Amazons, and a trained warrior. When a pilot crashes and tells of conflict in the outside world, she leaves home to fight a war to end all wars, discovering her full powers and true destiny.

The fourth of DC Comics’ DCEU franchise following Man of Steel, Batman V Superman: Dawn of Justice and Suicide Squad, it’s fair to say there’s a fair bit resting on the outcome of Gal Gadot’s solo film Wonder Woman. Whereas neither Zack Snyder’s or David Ayer’s films were met with overwhelming critical praise – and in the case of Suicide Squad, the exact opposite – incoming director Patty Jenkins, last seen guiding Charlize Theron to Oscar glory in Monster, had the chance to summon all the goodwill for this iconic comic book character and deliver a rousing spectacle film that would right the hitherto wobbly ship that was Warner Bros attempt to mimic Marvel’s successful MCU. Gadot was rightly singled out as one of the truly positive notes in Batman V Superman; now she has the chance to… er, flex her muscles in her own movie and showcase the best DC had to offer. 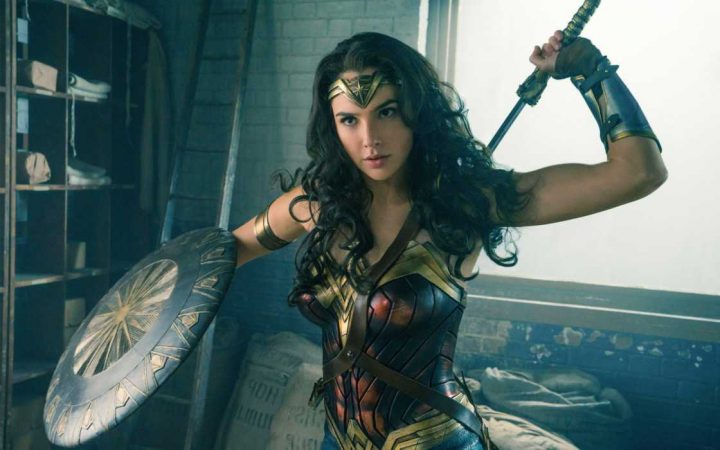 Wonder Woman is set during the final days of the Great War, which has plunged Europe into a deadly conflict the likes of which have never been seen before. Hidden away from the world of mankind is the island of Themyscira, home to the Amazons, a race of warrior women created by Zeus to protect humankind against the evils of Ares, God of War. A young princess, Diana (Gal Gadot in adult form, as well as Lilly Aspell and Emily Carey in earlier stages of her life) yearns to learn to defend her home against Ares’ possible return, over the protests of her mother, Queen Hippolyta (Connie Nielsen – Gladiator) and at the behest of her aunt, General Antiope (Robin Wright – House Of Cards, Forrest Gump). When US pilot Steve Trevor (Chris Pine – Star Trek, Hell Or High Water) crash lands his plane off the coast of Themyscira, leading pursuing German troops to attack, Diana is forced to reconcile her mother’s wish to remain absent human contact with her desire to aide mankind in defeating the rise of Ares once again. Diana leaves the island with Steve, returning to London where both she and Rogers begin a mission undertaken to locate the German General Eric Ludendorff (Danny Huston – 30 Days of Night), who is working with chemist Isabel Maru (Elena Anaya – Room In Rome) to develop even deadlier chemical weapons to defeat the Allies and ruin the possible armistice. Aiding Diana and Steve on their mission are Steve’s “secretary” Etta Candy (Lucy Davis) and Sir Patrick Morgan (David Thewlis – Harry Potter, Divorcing Jack), as well as a trio of fellow spies in Sameer (Saïd Taghamaoui – Conan The Barbarian, Vantage Point), Charlie (Ewen Bremner – Trainspotting, Pearl Harbor) and Chief (Eugene Brave Rock). 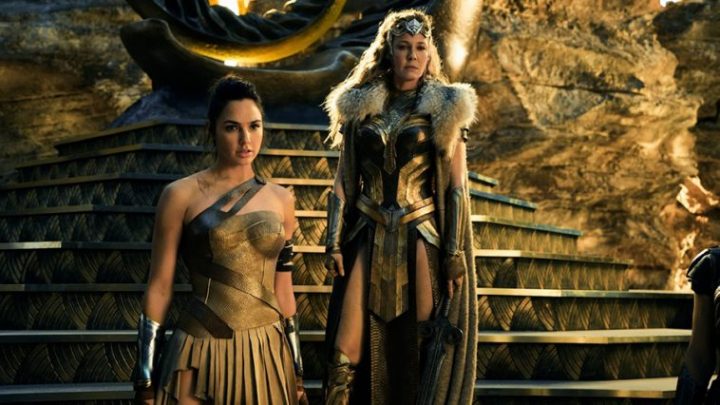 Amidst a blaze of internet publicity (or lack of, if you believe some quarters of the online fandom) and controversial “women only” screenings that provoked manchild outrage across the globe (really, guys? Really?), Wonder Woman stands tall not only as a self-contained adventure film about its title character, but is easily the best of the DCEU films to-date. Some might argue that isn’t a high bar of achievement considering the blasting the previous three received critically, but even the hater will have to admit that Patty Jenkins’ achievement here is nothing short of phenomenal. Not only did Wonder Woman have to sell the backstory of Diana’s origin, it also had to deliver slam-bang action as well as a genuinely emotional story about a woman who knowingly leaves home to help humanity in its darkest hour. To say it does so with complete authority is an understatement: Wonder Woman is as pure a superhero film as you’ll find in this age of dour, depressing angst-ridden instalments of the DCEU (and even recent Marvel films, if you look closely), thumbing its nose at “world building” convention and instead striking its own path to cinematic legacy.

There are so many positives to Wonder Woman it’s hard to know where to begin. For a female-driven film, you’d expect a studio to mandate some kind of feminist statement within it somewhere, an obvious “women are awesome” homily that would rankle with obviousness and cantilevered virtue signalling, and yet this never occurs. What little pointed moments about female strength are derived largely from Diana’s actions and emotional arc, rather than a politicised moment that feels disingenuous. The screenplay, by Allan Heinberg, who previously penned a five-issue run of the Wonder Woman comic following it’s post-Infinite Crisis relaunch, touches on Diana’s mythical ancestry, with her creation by Hippolyta out of clay a recurring liturgical motif establishing her other-worldliness against her Amazonian sisters. This sense of history, vague as it might be, automatically gives Diana a Christ-like figurehead of matriarchal dominion, and gives weight to her arc later in the film where her actual parentage is revealed. Non-comic book readers will be surprised, although I doubt hard-core DC fans will raise an eyebrow. 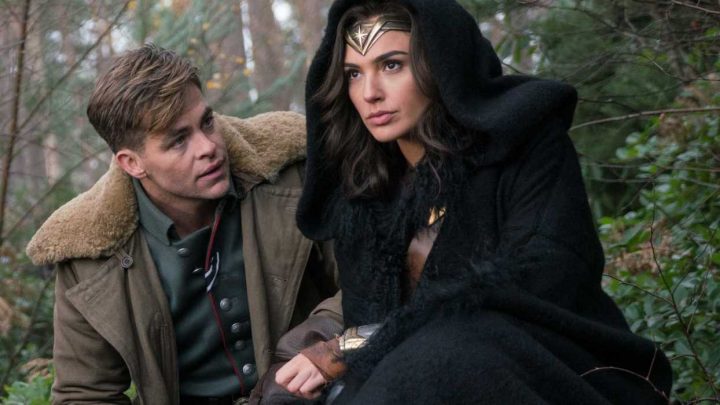 Heinberg writes this story using a fair degree of fish-out-of-water humour, and indeed a lot of Wonder Woman’s laughs are generated by Diana’s insistence in breaching early 1900’s social and political protocols continually, although it’s pleasing to see there’s never any backhanded snark to it, it’s all gentle fun. Diana’s femininity is never questioned, and the men she’s surrounded by later in the film are obviously quick to realise she can handle herself in what is – to them – a man’s world of death and destruction. Diana’s arc revolves around helping mankind and destroying Ares, whom she believes to be the inciter of the war itself. This is both a tragic and uplifting aspect to Wonder Woman’s narrative, and the film’s emotional core revolves around it. Wonder Woman comes to man’s world to be a beacon, a ray of light in a terrible darkness, and she does become just that – a key scene, hinted at in the numerous promotional trailers, has Diana striding out across a literal No Man’s Land of the war, the Western Front, swatting bullets and grenades aside as she makes for the German lines. It’s a glorious moment in the film, the glint of gold, red and blue shattering the bland grey of wartime Europe, her relative innocence to man’s depravity yet to be sullied. Coupled with Rupert Gregson-Williams’ thunderous score (which utilises that terrific Hans Zimmer musical theme for Wonder Woman superbly) it’s one of the true highlights in a film filled with them. It’s emblematic of both the character and the story Jenkins is telling.

Yet Wonder Woman never panders to condescend. The film never talks down to its audience, never snarks or snidely repudiates a moral high ground, and it never once attempts to hammer home a political, social or sexual point. Both Diana and the supporting cast, from Chris Pine’s Steve Trevor down to Lucy Davis’ hilarious Etta Candy, are all equal in the eyes of this film. Steve blusters about as Diana matches wits and barbs with him, as well as softening to understand more about the world she’s entered, but he’s never cavalier or superior to her, nor she to him. They both have a job to do in this story, and they do it. 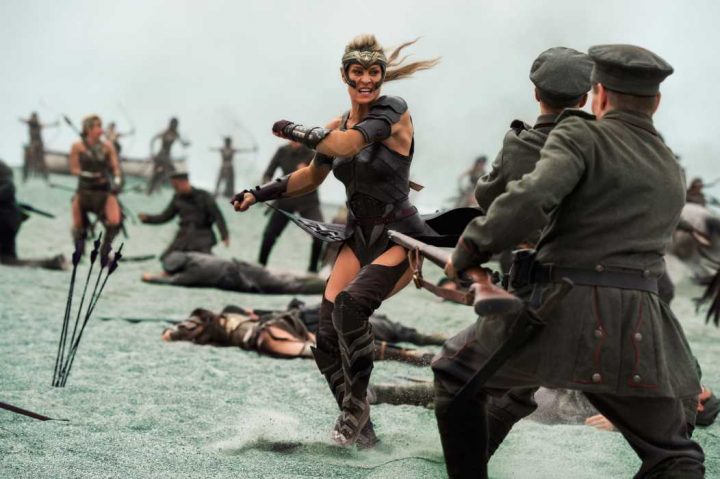 Among the film’s many delights is the opening backstory set on Diana’s homeland, Themyscira, an all-female warrior society containing elements of producer Zack Snyder’s 300, Wolfgang Peterson’s Troy and a bunch of ass-kicking take-no-prisoners battle prowess. Connie Nielsen delivers a solid performance as Hippolyta, the Amazonian queen who wants to protect Diana from knowing about her true nature (this nature is revealed in the film’s climactic finale) and basically keep her bottled up Rapunzel-style on the island. Robin Wright looks positively ripped as Antiope, the headstrong battle-hardened chief of Hippolyta’s army, and her relationship with Diana is akin to that between Luke and Obi Wan, only rougher. Much, much rougher. The Themyscira-set act of the film really lays the groundwork for all that follows, not only with Diana and Steve’s growing bond (and early scene sees Diana discover Steve au naturale, which provoked many laughs in my screening) as well as providing the grand mythic foundation for the progressive saviour mission Diana undertakes.

People were concerned when Gal Gadot was cast as Diana for a number of reasons, chief among them her ability to act well enough to provide one of comics’ most enduring female hero icons with the gravitas and emotional range modern audiences expect. Gadot’s smaller parts in the three Fast & Furious films she appeared in, as well as the crime thriller Triple 9, were viewed as a litmus test to her capabilities, and one could argue that she might have fumbled the part were she given the wrong material to work with. Gadot’s abilities as an emotive actress aren’t as strong as her physicality (she spent two years as a combat instructor in the Israeli military, did you know that?) but Jenkins works to her strengths; to wit, surrounding her with quality supporting cast who can elevate the material instead. As Diana, Gadot is terrific, imbuing the character with warmth and other-worldliness that manifests as innocence rather than arrogance. The Wonder Woman I always seemed to see whenever I read the comics felt a touch out-of-touch, if that makes sense, not in a way that’s endearing (like it is here) but rather in a manner that defeats the purpose of her very existence. Gadot’s emotional-range abilities aren’t as strong as I’d have liked, sure, but by golly you’d hardly care given all that’s asked of her in this role. She kicked ass in Batman V Superman, and she smokes the opposition in her first solo adventure. 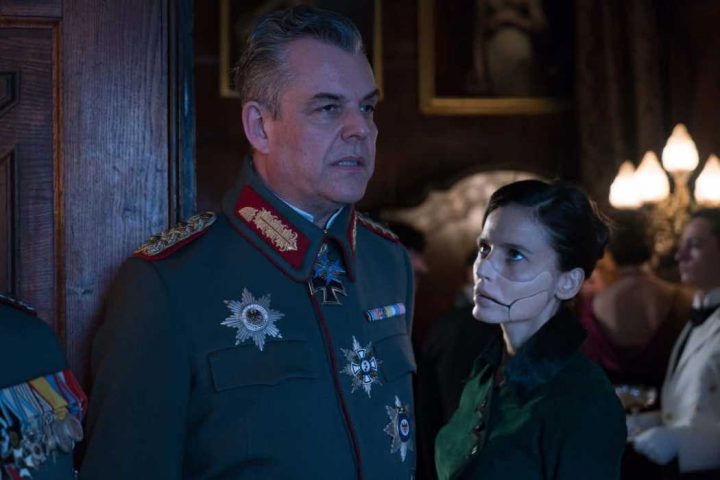 The adulation surrounding Wonder Woman should rightly be levelled at the feet of director Patty Jenkins, who crafts a film of both wit (the film is filled with laughs, some strong and some not-so-much) and adventure, a high-octane rollicking wartime superhero movie that wears its heart on its sleeve and never once apologises for it. Wonder Woman is a pure comic book movie; it’s on par with Christopher Reeve’s Superman, or Captain America: The First Avenger (in fact, this film bears some remarkable similarities to the debut of Steve Rogers in the MCU), in that it establishes a truth to the title character that emblazons itself across the screen in every frame. If there’s a fault to the film it’s in the third act, where the key villain is revealed and the “battle” antics rise up a notch to Man Of Steel destructo-levels, and things get a little loud, but it’s a minor aspect to an otherwise beautiful, thoughtful, euphoric story of compassion, human empathy and strength.

Diana is a warrior and a woman, inextricably intertwined elements of the same person, neither being a weakness and both unalterably strong. Comparisons are the weaker critic’s tools of trade, and I’m loathe to suggest Wonder Woman is the best comic book film of 2017 (it is) – hell, it’s very nearly the best film of 2017 so far – but Patty Jenkins has most definitely reset the course for the DCEU going forward, and resurrected my waning interest in these properties following whatever the hell Suicide Squad wanted to be. Wonder Woman is delightful, exciting (I repeat, it’s fist-pumping wonderful with a capital W!) and refreshing against a backdrop of interlocking films and universe building storytelling where characters are sacrificed their moments to serve a larger corporate interest. You should see Wonder Woman as soon as you possibly can.