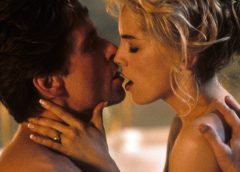 San Francisco detective Nick Curran (Michael Douglas – Ant-Man) is investigating the murder for former rock musician Johnny Boz, who is murdered with an ice-pick in his bedroom whilst having sex. The crime is similar to the murder depicted in a recently successful crime novel, written by Catherine Tramell (Sharon Stone – Sphere), who becomes the prime suspect. Initially sceptical, Nick uncovers Catherine’s alibi, and she passes a lie-detector test, although something about the woman doesn’t quite cross her off his list. As the pair form a relationship of a sexual nature, Catherine’s work as writer becomes more sinister – befriending former killers, including her current bisexual girlfriend Roxy (Leilani Sarelle – Days Of Thunder), among them – while Nick’s psychologist (and former fling) Dr Beth Garner (Jeanne Tripplehorn – Sliding Doors) exhorts him not to become involved with her. The more Nick and his partner, Gus Moran (George Dzundza – Crimson Tide) dig into Catherine’s past, they soon uncover a terrifying secret that will make all of the writer’s books look positively tame by comparison.

Perhaps no other film of the 90’s tapped into the sexual psyche of modern Hollywood as Basic Instinct. The film would spawn a number of high profile “prestige” clones, notably Jade, Sliver, Color Of Night and Madonna’s awful Body Of Evidence, all of which attempted to cash in on the idea of casting hot actresses in the nude for #art, and made Sharon Stone an A-list superstar. The film’s iconic interrogation scene, perhaps the most freeze-framed sequence in all of home media history, in which Stone reveals… herself… after uncrossing and re-crossing her legs before a gaggle of ogling men, became synonymous with modern cinema’s strong feminine appropriation, in which the actress, by revealing her most intimate parts, somehow becomes a “stronger” woman for it. Noted screenwriter Joe Eszterhas, who had previously written Flashdance, came to the film and transformed it into a pulp psyche-thriller, complete with red herrings, mid0-film twists and gratuitous sex and violence. The film contains significant sex scenes and nudity, mainly of Stone and (sadly) Michael Douglas’ ageing body, as well as a rape sequence (involving Douglas and co-star Jeanne Tripplehorn), and a number of brutal murders (the film’s opening scene is a startling mix of sex and death!). Today, a film like this would come with multiple trigger warnings.

Director Paul Verhoeven is no stranger to controversy of adult-oriented themes. He burst onto the Hollywood landscape following the success of RoboCop, cemented his status as a prestige director with Arnold Schwarzenegger’s Total Recall, and then left-turned into sexville with Basic Instinct. His films are noted for their violence and typically over-the-top hyperbole (later films such as Starship Troopers and Hollow Man are typical of Verhoeven’s ghoulish disposition to wanton violence with undercurrents of politicised messaging) although it should be said that Basic Instinct is perhaps his most straightforward American film, at least in terms of its more traditional narrative. It echoes Hitchcock’s spine-tingling sense of unseen threat, a claustrophobic mystery winding towards a bloody, violent climax, while ingeniously threading in themes of fidelity, danger, jealousy and revenge; Eszterhas’ script is filled with bruising dialogue, a pulp-thriller mentality and salacious adult appetite of desire making for a heady encounter with a mystery of considerable perplexity.

This combination is the perfect recipe for the Dutchman’s unique visual sensibility, in which he punctuates the seedier side of San Francisco’s gruesome underbelly with lengthy sex scenes and bloated dialogue interplay between Stone and Douglas. Stone, for her part, turns Catherine Tramell into a screen siren apropos of the great noir heroines. Or is she a heroine at all? The film’s clever use of bait-and-switch storytelling and amplified suggestibility makes for a confounding character arc, with Tramell an ice-cold bitch for the majority and a whimpering, sexy-as-hell innocent in a few key moments. Stone’s performance, nude or clothed, is one for the ages, and it’s little wonder the style she exhibited here would follow her through almost the entirety of the next decade or so. Michael Douglas, meanwhile, plays his usual affably nonchalant, self-assured self, a mixture of confusion and sly gamesmanship, as if he wants to play in Tramell’s world but lacks the intellect to truly match her. The film portrays Nick Curran as a participant in the actions of the story rather than a passive bystander, inserting him into the mystery by way of his infatuation with Catherine as an more mature real-world interplay. In truth, no cop worth his salt would get as balls-deep into the case as Curran does with Tramell, if you get my meaning. 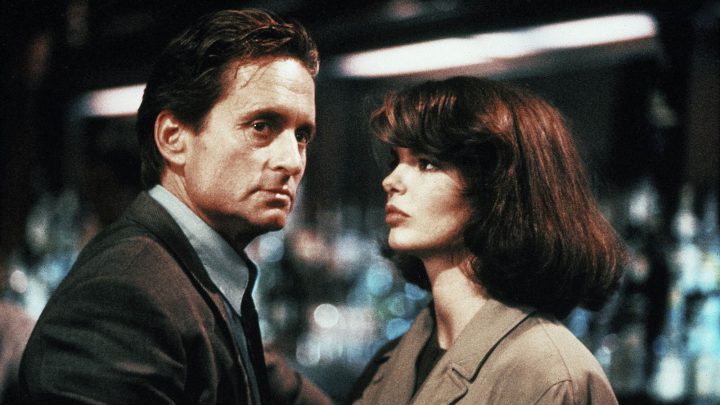 However, despite the film’s excess of style and murdery subplots, it’s far more famous for its portrayal of sex. The opening sex-n-stab sequence alone will have grandma squirming uncomfortably in her seat, and protracted nudity (mainly of Stone, but both Tripplehorn and others get their gear off from time to time) and the famous Douglas/Stone silk scarf sex scene – which lasts many minutes and is filled with the threat of possible impending death, if not simple tremulous danger – is as bold and cathartic for the film as ever. As I mentioned, it’s a rare film in which the sex scenes are inextricably linked to the plot, as well as character development, on such an intrinsic level that were you to remove or modify them (as was done for many television broadcasts here in Australia) then not only was the film’s impact lessened, but the story and structure inherently weakened. The Douglas/Stone relationship is built in the film on sex, a raw, primal attraction that wouldn’t work nearly as well without their sheet-cavorting, and the climax of the film (as well as the film’s denouement using this theme as a backdrop for its suggested noir gut-punch) rides primarily on the emotional heft formed out of the film’s sense of debauchery. 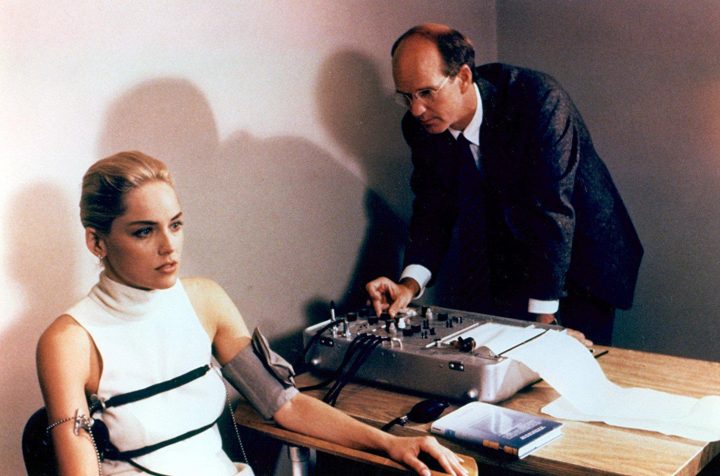 Basic Instinct was controversial at the time for its supposed negative depictions of the LGBT culture of the day. It was suggested that the negative portrayal of the film’s gay and bisexual characters was yet more Hollywood narrative hijacking, although in truth I never really noticed that being much of an issue in my recent viewing of the film. Most of the people – gay or straight – in the film are appalling human beings in some way or another, from the sweaty, unprofessionally lascivious interrogation cops checking out Sharon Stone’s bare crotch to the snarky, cesspit of jealousy in the gay club Stone takes Douglas’ character to at one point, so I’d suggest if you have issues with a single issue of the film I’d wager you’re not looking hard enough, or really just making something out to be more than it is. Basic Instinct provokes and invites controversy by its very nature, although today it’s approaching anachronistic decay at a rapid clip. 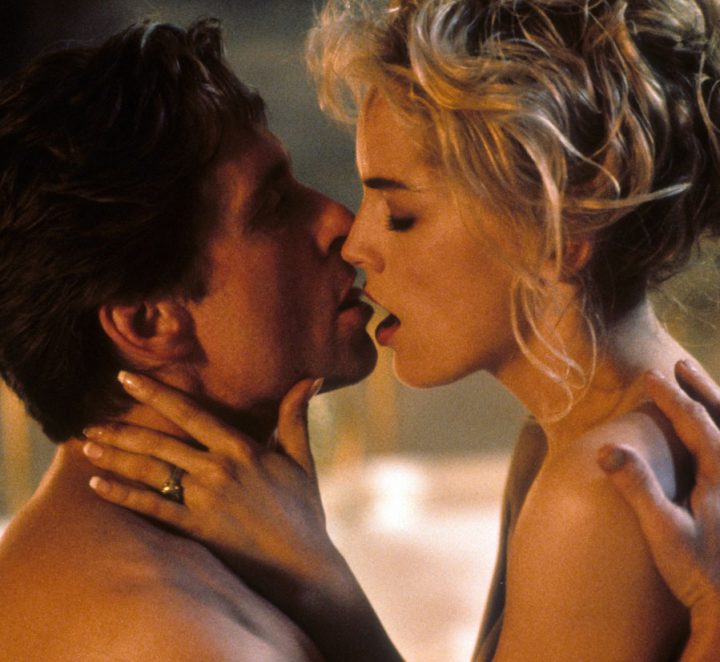 Approaching Basic Instinct again nearly 30 years after the fact is an intriguing prospect. The film’s notoriety is well-earned, yet by today’s over-saturated sexual market perhaps a touch overplayed. The script’s ribald language and deeply masochistic tone is invigorating and salacious, sure, and Verhoeven’s direction is as always adrenalized for action whether of the bedroom, courtroom or dance-floor kind. The film’s camerawork is remarkably assured for the man who would subsequently give us Showgirls, one of the most unrestrained shitshows of cinematic insanity ever made, and the production value is breathtakingly vibrant. Key to note, the film’s cinematography by future Twister and Speed director Jan de Bont, is excellent, and the Oscar-nominated score and editing are, as you’d expect, sublime. Jerry Goldsmith’s music is both thrilling and evocative as any good noir should be. In terms of pure film-making Basic Instinct is a really good exponent of the genre, fuelled by salaciousness and driven by an undercurrent of sexual thirst, mixed with death and betrayal at every turn. Whether you think it needs the sex and graphic violence to work is a matter of personal taste but I think removing either element of the film would lessen its overall impact, and reduce the effectiveness of the storytelling. Complexity hidden by brazenly daring pulp idealism, Basic Instinct isn’t for everyone but my goodness is it a film that achieved all it set out to.