Yeah, it’s as bad as they say.

Showgirls came out in 1995, back when I had just discovered a serious love of cinema. It’s a pity, then, that Showgirls isn’t great cinema. It truly isn’t – Showgirls is a terrible film, and yet since its release has gone on to become something of a cult hit, a minor classic of “so bad it’s good” trash that you watch knowing it’s bad, expecting worse, and getting so much less. It’s interesting to note the talent behind the screen on this film; Paul Verhoeven (together with screenwriter Joe Eszterhaus) had become a minor celebrity director in his own right following the success of 1992’s Basic Instinct, a film which wowed audiences with its audacious sexuality (conversely, it also caused plenty of controversy, heh heh). Verhoeven, a Dutch national who emigrated to Hollywood and directed such pulp fare as RoboCop and Total Recall, gave his films a salacious, soft-porn feel, as his European style clashed remarkably with Hollywood’s often restrained style. Not so much with his depictions of violence, rather with the tone of the sexual activity often portrayed in his films. To see a director of Verhoeven’s trashy, often misogynistic view of the world take up a film about strippers and Vegas showgirls, retrospectively you probably shoulda known what kind of film you were gonna get: Showgirls is exploitation of a kind not seen in Hollywood since the mid-80’s, when everything was boobs and bums.

Showgirls is laughably bad. From its inane dialogue and horrible screenplay, to Elizabeth Berkley’s ham-acting, to her scene with Kyle MacLachlan involving flapping about like dying fish pretending to have sex, Showgirls is a showcase of A-grade money thrown at D-grade material. Verhoeven appears to be trying to make a silk purse from a sows ear here, a futile exercise that rips apart at the seams of this salacious, stupid, utterly ridiculous romp involving a bunch of people who should know better.

Berkley (a former star of sitcom Saved By The Bell) plays Nomi Malone, a girl from “back East” who travels to Las Vegas to try making it as a showgirl. And by “show”, we mean lavish productions where the cast spend most of their time on stage wearing as little clothing as possible. Gina Gershon, as current “leading lady” Cristal Connors, a kill-or-be-killed showgirl veteran, had her breakout role here (both literally and figuratively), and it’s easy to see why she became the gay icon she has been in the years since. Kyle Maclachlan plays wealthy hotelier Zack Carey, whom Nomi uses to further her own career (it’s not entirely one-way traffic, with Zack using his wealth and position to sleep with many gorgeous showgirl), while Speed’s Glenn Plummer plays a nightclub bouncer who tries to make sure Nomi doesn’t go in the wrong direction. Watch for Robert Davi as the guy who “owns” the strip club Nomi finds work in early in the film. 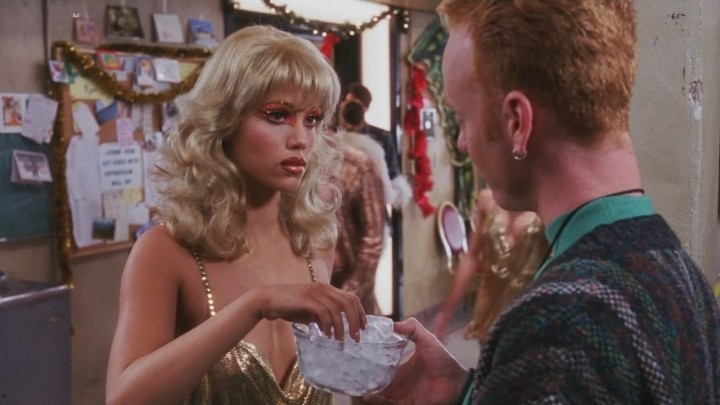 Eszterhaus’ script is dire, a poster-child of how not to write a Hollywood screenplay. Eszterhaus seems to revel in the seedy, slimy underbelly of Vegas’ nightlife, a dog-eat-dog world populated by the worst humanity has to offer. This in itself isn’t the issue, because we’ve been here before, but it’s the complete lack of believability the screenplay exhibits in developing both the plot and the characters. And I use the term “characters” loosely, because what Showgirls gives us isn’t so much representations of people, but representations of what Verhoeven and Eszterhaus think people are like.

Nomi is a psychotic maniac, from what this film gives us – her anger management issues alone would warrant a padded room, yet the film casually brushes aside any growth within her as a “person” for the sake of moving what little story there is along. Berkley is a frankly awful actress, and makes a complete turd of a role which offers her nothing by way of depth or nuance. Considering the entire film is seen from her perspective, and Berkley is forced to shoulder almost the entire film on her delicate breasts, it’s an empty vessel we’re forced to enjoy as she tantrums and petulantly claws her way up the food chain of Vegas nightlife. One minute she’s laughing and happy, the next she’s abusive and angry towards anyone within spitting distance, and for no apparent reason whatsoever. It’s such a bipolar role, and a bipolar performance, with entirely too much “extreme” acting, that it’s little wonder Berkley’s career nosedived after this.

It’s a fault running through the entire film. Showgirls’ rancid portrayal of women, and more importantly the scumbag men who enable this kind of existence, might have a ring of truth about it, but you don’t see much apologetic narrative from Verhoeven. No, he delights in this stuff, lingering provocatively on both flesh and sensuality like some half-baked pornographer. Rendering everyone in this film as assholes isn’t subtle, and Eszterhaus’ script isn’t clever enough to overcome the shitty acting with anything remotely intelligent; as a base, orgiastic wallowing in the Pit, Showgirls revels in itself. In any case, it makes finding useable pictures for this review rather difficult. 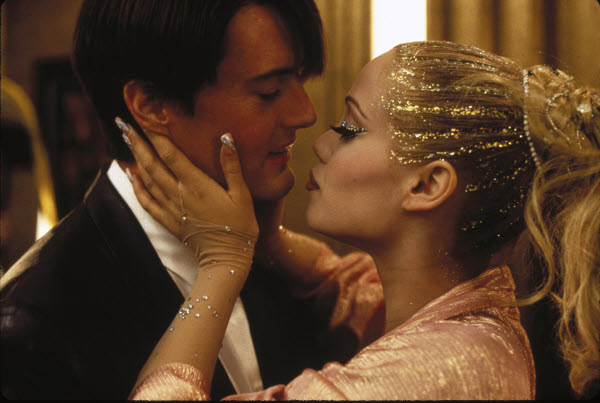 In spite of this, there’s an alarming subversive wit to the film. While it’s running, you can’t help but be horrified by what you’re watching, and yet when all’s said and done, it’s so bad, it transcends itself and comes out as a clever examination on exploitation, a hugely meta gag of itself. What with the bad acting, the atrocious dialogue and the constant depravity on display, the full frontal nudity and depictions of lesbianism, bisexuality and various other “taboo” elements of Vegas strip-clubs, Showgirls doesn’t lack enticement for viewers looking for a vapid, shallow time. You can’t help but think that Verhoeven knew he was making trash, and went as hard as he could to make it as trashy as he could just to piss off the critics who would have to watch it. Is Showgirls his big middle-finger to the same bunch who lambasted Basic Instinct as nothing more than a misogynistic fantasy? Certainly seems to be.

Showgirls is a dazzling parade of bodies, mostly naked, as Verhoeven’s camera lavishes attention on the almost never-ending role call of nipples and other private parts. While the plot – a small-town girl making it in the Big City and having to sell her soul to do it – is hardly new, Verhoeven’s fresh coat of pain approach and decidedly bottom-scraping use of nudity to elicit a reaction (outrage, horror, endearment?) makes this film almost as bipolar as Berkley’s acting. Revisiting this film some twenty years later, I can now truly appreciate why the packed out cinema was mostly full of men, and why this film remains as critically reviled (albeit universally loved) as it is. Showgirls is exploitative, derivative, misogynistic and definitely sexy – and it’s an awful excuse for a film. Yet there’s something about it people find appealing in a reverse engineered kinda way. Adjust your expectations accordingly, you might have a good time. Don’t expect Shakespeare.