Sliver is the kind of trashy, awfully horrifying movie you need to watch when your cinema palette needs a damn good douche. Starring Sharon Stone in the white-hot post-Basic Instinct period, when she was Hollywood’s “It” girl for a while (at least before that shower scene with Stallone in The Specialist, blech), Sliver also features a Lesser Baldwin, Billy (or, ahem, William), as well as Tom Berenger, in this sexual, salacious take on downtown New York psycho living. Scripted by Basic Instinct’s trash maestro, Joe Eszterhas, and directed by Aussie helmer Phillip Noyce, Sliver lacks both any kind of narrative tension worth committing to or justified reasoning to its sex sequences, and boasts some of the worst acting in a big-budget release this side of an Adam Sandler movie. Sliver, while trashy, is also awful. 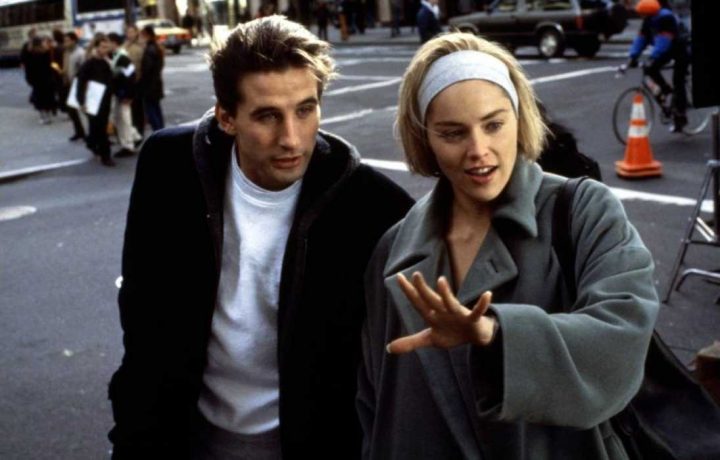 Stone plays Carly Norris, a successful New York book editor, who finds herself out of a bad marriage and looking for a place to live. She moves into an exclusive downtown residential address, where she learns her apartment was recently occupied by a woman named Naomi Singer (Allison Mackie), who purportedly leaped to hear death from the balcony. Carly meets several of the block’s residents, including the handsome Zeke (William Baldwin), former investigative journalist turned writer Jack Landsford (Tom Berenger), and neighbour Vida Warren (Polly Walker). However, as some of the residents die off around her in suspicious circumstances, and the attention of both Zeke and Jack begin to cause conflict, Carly realises that all is not right within the walls of the New York sliver.

Claimed by some as an examination of voyeurism, Sliver is pretty much the kind of sexed up B-movie trash you’d expect from a laboriously clunky writer like Eszterhas. The man’s previous films had all generated solid box-office return, including Stone’s 1992 thriller with Michael Douglas, but Sliver, alongside the abysmal, unintentionally hilarious Showgirls, as well as the poorly received Jade, saw his career high wane rather quickly. Dress Sliver up as anything you like, but at the end of the day it’s pure sex-and-violence upon the crucible of narrative vexation. Key to the film’s salacious appeal was the conceit of Baldwin’s character having an entire room set up with screens on which he’d watch closed-circuit feeds of illegally installed cameras throughout the apartment complex. The film’s tag line was, naturally: “You like to watch. Don’t you.” Gak.

Silly and illogical beyond the pale, Sliver feels like the kind of pulp mystery Eszterhas would shit out on a lunchbreak, lacking any kind of depth or dramatic heft as Stone’s Carly Norris basically founders amid the sordid details of her affair with Zeke, and the incredibly inept murder of the apartment’s former resident. Lacking any kind of character arc whatsoever, Stone is encumbered with bringing writhing, dispiriting sex sequences to life as she humps, gyrates and moans against Baldwin’s execrable performance. At one point, and this genuinely made me laugh out out, Stone’s character cries whilst mid-coitus with Baldwin, for what reason still baffles me. The sex scenes (which is what we’re all here to see, let’s be honest) lack even the most basic sense of eroticism, and this film strives for shock value of the kind Basic Instinct had in spades by homaging that film’s “leg cross” scene with Stone de-panty-ing herself at a restaurant much to the wooden discomfort of fellow patrons.

So if the sexy stuff isn’t any good, what about the rest of the movie? Sadly, it’s worse. Sliver’s character roster is abominable, a cluster of single-dimensional New York denizens of whom Carly has little-to-no attachment (even her boss, played by the always excellent Martin Landau, feels distant to us) and the victims of the film’s killer (or killers….) are your basic loudmouth types with stiff, horribly cliched personalities. William Baldwin has the distinct advantage of being a terrible actor, and Sliver gives him his best shot at mangling some of the scripts most asinine and leaden dialogue. An entire subplot about Zeke’s infatuation with volcanoes, which is mentioned several times throughout the film, was set to conclude the film with both of them flying into one – until the ending was changed, leaving the entire arc empty in the end. Baldwin might look pretty, but an actor he ain’t, and his chemistry with Stone is simply non-existent. And that’s critical for the film to work.

Tom Berenger, the poor chap, is stuck in the friendzone role in Sliver, ostensibly an Hercule Poirot-esque role that feels largely ineffective because Noyce can’t balance the tension of his danger with the mystery of Baldwin’s. A last moment twist in the film’s big reveal, which revolves around the dynamic between Stone, Baldwin and Berenger, is a big WTF to audiences as it comes literally out of the blue, and undermines a lot of the character’s on-screen motivation with a cheap gimmicky “gotcha”. And instead of flying into a volcano – which would have been cool, if a tad overblown considering the small scale of the film’s story – what we’re given isn’t so much a grand motive or examination of the moral dilemma at hand, but rather a petulance and insipid cheating of the audience out of any kind of satisfaction towards both Stone’s diminished pseudo-feminist part, or Baldwin’s cocksure hypersexual perversions. Sliver ends with many bangs, (figuratively and literally), but it doesn’t end well at all.

Sliver falls into that middle grey area of not being good at all, but not being so bad as to be good on the other side. Showgirls, for example, is considered a camp classic purely because it’s so bad. Sliver, of which both Basic Instinct and Jade share considerable genetic material, is just lamentably, irredeemably bad, the kind of bad that’s just bad and not good at all. It’s little wonder almost everyone involved in this came in for a Golden Raspberry nomination (it’s true – the director, writer, the three stars and one supporting actress, as well as the film itself, were all nominated); deserving of your scorn, the result of too much attention given to salaciousness despite a dearth of story or convincing dialogue, Sliver is an atrocious piece of garbage that lacks even the most subtle moments of creative nuance or depth.