Torn from the pages of ancient Northern European myth, Robert Eggers’ The Northman is a gristly, sinewy exercise in blood-soaked violence and testosterone-fuelled vengeance. A mix of Nordic Game of Thrones, occasional semi-spiritualism, and Eggers’ virtuoso camerawork, The Northman’s bravura style and eclectic intellectual stimulation make for a heady, engaging mix. Based loosely on the ancient Norse myth of Aurvandill, a narrative upon which Shakespeare would base “Hamlet” centuries later, Eggers’ parlays a Braveheart-esque masculinity through this orgy of revenge and comes up trumps, turning a one-note idea into a magnificently filmed opus of grimy, frigid existence among the peaks of Europe’s most breathtaking scenery. Way back in the 9th Century, war-king Aurvandill (Ethan Hawke) returns from overseas conquests to his kingdom on the island of Hrafsney (located in Southeast Iceland), where his young son Amleth (Oscar Novak) and wife, Queen Gudrin (Nicole Kidman) wait for him. He is accompanied there by his brother Fjolnir (Claes Bang), victorious. However, when Fjolnir betrays the King and murders him to claim his throne, Amleth escapes to distant shores, where he grows into a man (Alexander Skarsgard) working as a mercenary for hire. That is, until he learns that Fjolnir is living in exile in Iceland, having had his kingdom usurped by another ruler. Seeking revenge, Amleth sets out for Fjolnir’s farm, posing as a slave, where he meets a Slavic sorceress, Olga (Anya Taylor-Joy), with whom he falls in love. Keeping his true identity hidden, he integrates into the household of Fjolnir in order to gain his trust, so that when the time is right, he can fulfil his destiny – foretold by a mysterious seeress (Bjork) – to kill his uncle with a powerful blade hewn only to seek revenge. 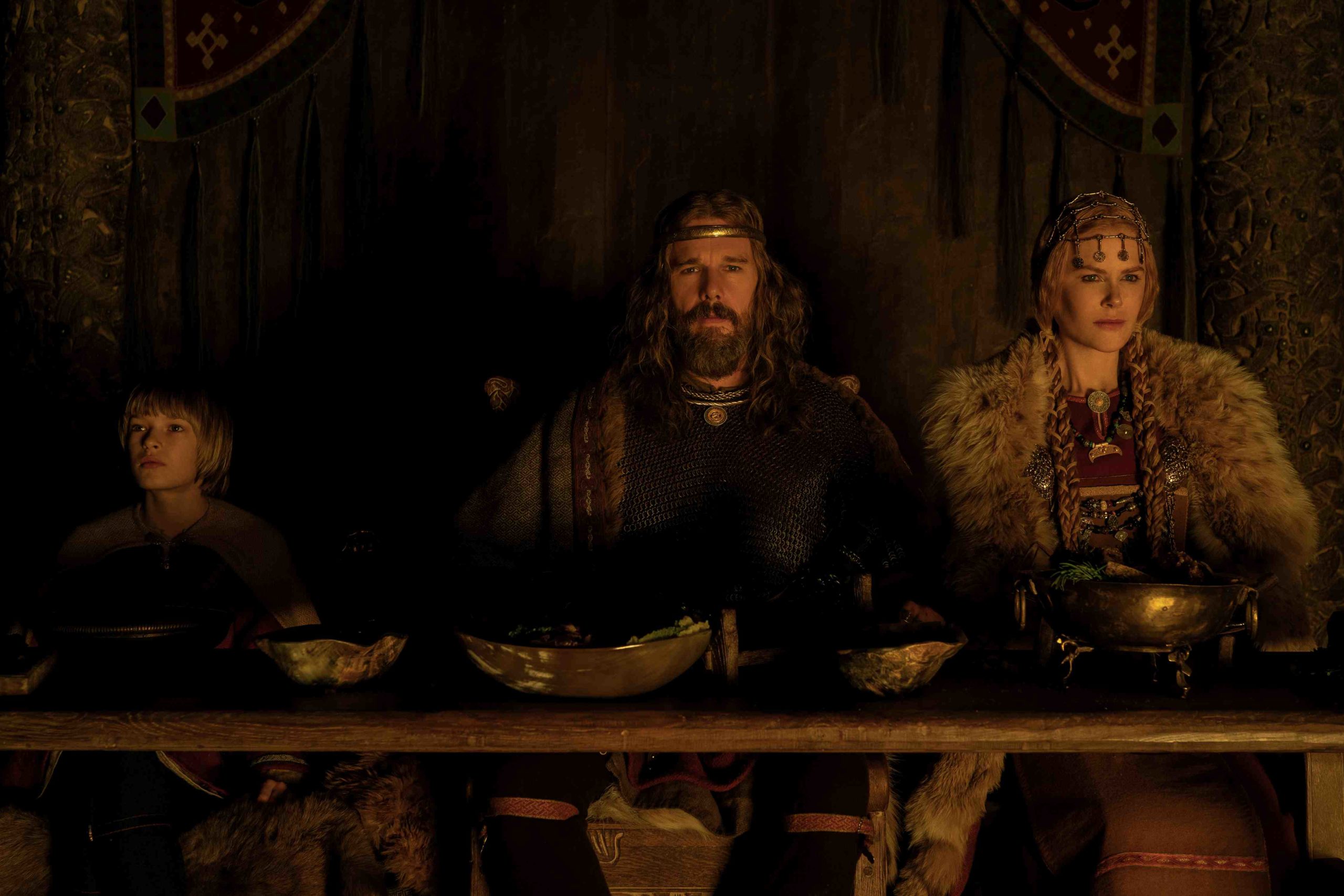 An intoxicating blend of fantasy, allegory and pulse-pounding violence, The Northman is not a film for the faint of heart. It’s a dirty, inescapably pungent film depicting the hard realities of life in the world of the time, with villages and families living in stone or mud huts barely better than dank caves, and enslaved to the biting northern wind that surrounds the landscape upon which these characters exist. Indeed, “existing” seems to be the pejorative of the day for Eggers’ film, as the viewer is thrown into the wild and unkempt journey of Amleth, who seeks vengeance for the murder of his father; every frame of the film is sharply defined by the environment in which the story occurs, namely the wild unspoiled lands of Iceland and Northern Europe, as we cross oceans and mountains to tell Amleth’s tale. Eggers (The Witch, The Lighthouse) co-wrote the film with noted Icelandic poet and lyricist Sjøn, which I think goes a long way to explaining how detailed and period-accurate the film turns out to be. Classic Norse elements of Beowulf abound here, with the story paying homage to Viking mythology in referencing Odin and Valhalla, Hel (the Old Norse term for what we describe as Hell) and a variety of ancient touchstones for the culture of Viking life. At it’s heart its a story of a man seeking redemption for the sudden betrayal of his family line – something we can all empathise with – and as Amleth, Alexander Skarsgard makes a formidable protagonist. Infuriated zeal and frenzied, steely-eyed anger lurch from beneath the surface as Skarsgard turns the ancient myth into a living, breathing, sweaty screen legend, personifying masculine honour and rage wrapped up in the ability to pull his “mission” off. Amleth isn’t a superhero, he doesn’t go without a few scrapes and bruises as he works his way into Fjolnir’s graces to sate his bloodlust, but Skarsgard comes as close as he can to turning the ancient myth into a figure of absolute believability. Raw, carnal and brooding, Amleth doesn’t say a heck of a lot, but when he does you know somebody’s about to be fuuuuucked up. Skarsgard turns in a far better performance here than he could in his abortive Tarzan entry, thanks to better writing and Eggers’ far more complimentary direction. The film also boasts an excellent cast of supporting characters, most notably Nicole Kidman as Amleth’s mother, the duplicitous Gudrun. Kidman is scintillating and awe-inspiring in the role, delivering one of recent cinema’s most searing and jawdropping monologues late in the piece. Anya Taylor-Joy, as Amleth’s eventual intended love Olga, seems to have stepped straight off the pages of Game of Thrones as a Targaryn, her peroxide-blonde hair a notable bright spot in an otherwise dank and depressing aesthetic Eggers has developed. I thought the love interest between Amleth and Olga was grimly predictable, although never played with any delicacy, almost as if the pair entered into a bargain rather than a supple, nuanced relationship. Ethan Hawke plays the garrulous role of the tragic King Aurvandill with spittle-ejecting ferocity, endearing himself as a solid, virtuous man in love with his family, but in love with war more. Lastly, Danish actor Claes Bang – most recently seen in the Netflix/BBC miniseries Dracula, has an absolute blast playing Fjolnir, whose dreams of power are cast aside when he’s consigned to exile (much to his disgust). I thought he was a perfect foil for Amleth, having his own personal journey of growth through the movie despite being the target for Amleth’s unbridled anger, and Bang’s performance is in and of itself heartbreakingly rounded. It would have been easy to paint Fjolnir as a one-dimensional villain and leave it at that – boo hiss goes the audience. Eggers, to his credit and in keeping with his previous film endeavours, ensures that every main character in his film has some kind of depth to their character, and I found Fjolnir to be a far more accessible and empathetic character the further the movie progressed. 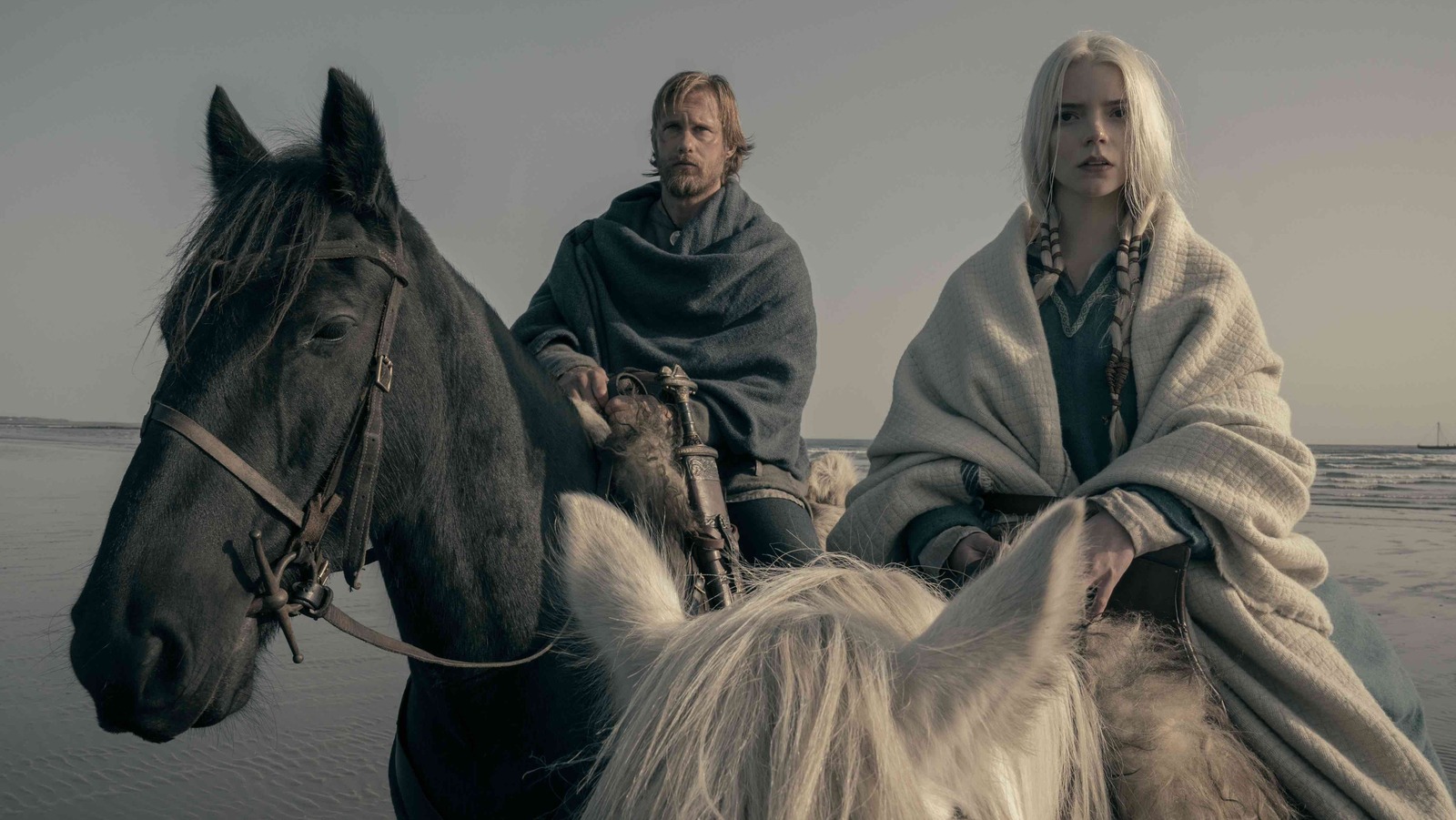 The film also sports some surprising cameos and minor supporting roles to well-known faces. Bjork, herself an Icelandic native and well-regarded songstress, makes a cameo as the mysterious seer who advises Amleth of his fated reunion with Fjolnir, although she’s near unrecognisable. Scottish actress Kate Dickie, who starred in Eggers’ The Witch, plays a small role as one of the female members of Fjolnir’s household, while Ralph Ineson pops in in the third act as a ships captain transporting people across the sea. Olwen Fouéré, who played an older Sally Hardesty in the recent sequel Texas Chainsaw Massacre, has a minor role as an occult priestess on Fjolnir’s farm, and noted Icelandic actor Ingvar Eggert Sigurðsson (Everest, Fantastic Beasts: The Crimes of Grindelwald and Lamb) plays a bizarre he-witch nestled around Fjolnir’s village. By far the most jaw-dropping cameo is that of Willem Dafoe, who plays Heimir the Fool, a gasping, wild-eyed creature who guides a young Amleth and King Aurvandill in spiritual enlightenment: this is one of the most astounding roles I’ve seen Dafoe in in aaaages, such is the indelible nature of the performance. 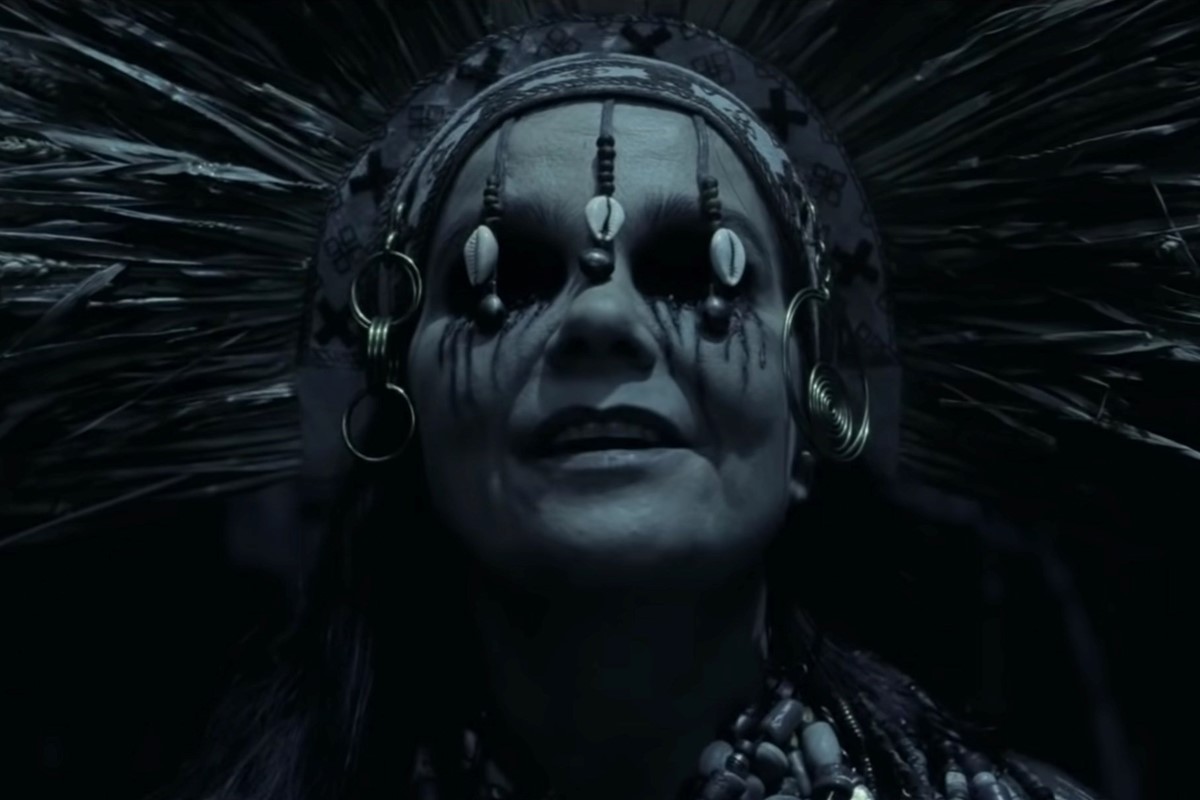 But the guiding light of The Northman is Robert Eggers direction. Assured, strong and defined by gritty realism and a smattering of hallucinogenic visions had by Amleth at various points throughout, The Northman is a tour de force of character, atmosphere and violence, soaked in human despair and misery, and awash with unflinching visuals that demand your attention. Eggers knows how to influence the audience’s mood through a simple shifting of the camera frame, of an elegant cut, or epic widescreen master shot. The lighting design and cinematography on The Northman is truly a sight to behold – if DP Jarin Blaschke doesn’t snag another Oscar nomination for his work here, people should be imprisoned. It’s a beautiful film, this one, despite the dour tone and visceral nature of much of what transpires, and almost every scene contains at least one shot you could frame and hang on your wall, it’s that affecting. No less effective – but for me, far more hard to appreciate – is the strident score by Tri Angle label founder Robin Carolan (a noted electronic music producer and composer) and Vessel (aka Sebastian Gainsborough), who deliver an atmospheric and evocative musical accompaniment that works for the film, despite my disinterest in its thematics. 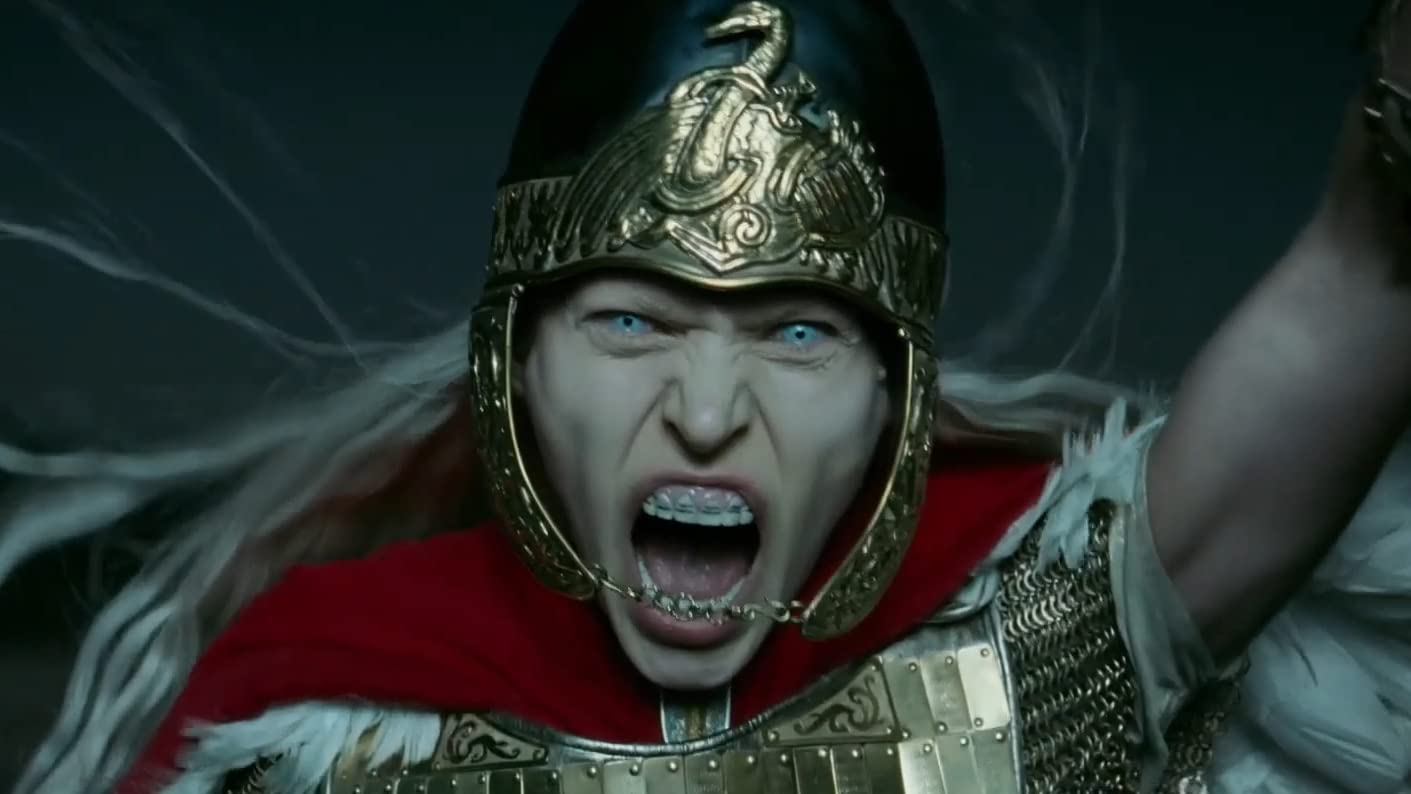 The Northman is a true epic in every sense of the word. It’s John Wick filtered through the grime of Braveheart and the ultra-violent, semi-supernatural sieve of Game of Thrones, mashed together with an almost Mad Max-style sense of the absurd; few films contain such magnificent direction, a compelling central character and a definitively iconic visual flavour, so much so that I’m starting to think Robert Eggers is our next Tim Burton or Wes Anderson. With The Witch and The Lighthouse, and now The Northman, Eggers has defined himself as a true auteur, beholden to nobody in his pursuit of a highly specific filmmaking style that will enrapture those seeking a more cerebral, more esoteric kind of viewing experience. I absolutely loved The Northman, and I cannot wait to reinvestigate its violently orgiastic gut-punch charms once again.