The granddaddy of all modern horror monsters makes his return in this direct sequel to Tobe Hooper’s 1974 cult smash, The Texas Chainsaw Massacre, with all the gore modern filmmakers can muster – and none of the scares. Leatherface, the titular chainsaw-wielding maniac psycho who has terrorised cinemas and home audiences in various forms through seven sequels, remakes and reboots since Hooper’s classic original, once again holds aloft his Poulan 306a make woodcutter, dons the hacked-off face of his dead mother, and proceeds to devastate the surprisingly large ensemble cast of dull-witted young adults, gun-toting Texan natives, and an octogenarian with a vendetta in this violent but emotionally vacant reprisal of one of film’s biggest genre titans. Whereas the original ’74 film was a low-budget independent smash hit (registering a box-office haul of nearly $31m off a production budget of just over $100,000), the 2022 edition of the franchise sees Netflix plonk down a solid budget for production in Europe (standing in for Texas) and attempt to set up a sequel in the most trope-ridden style possible, the studio parlaying interest in the franchise against dwindling returns on older horror properties and hoping for the best. 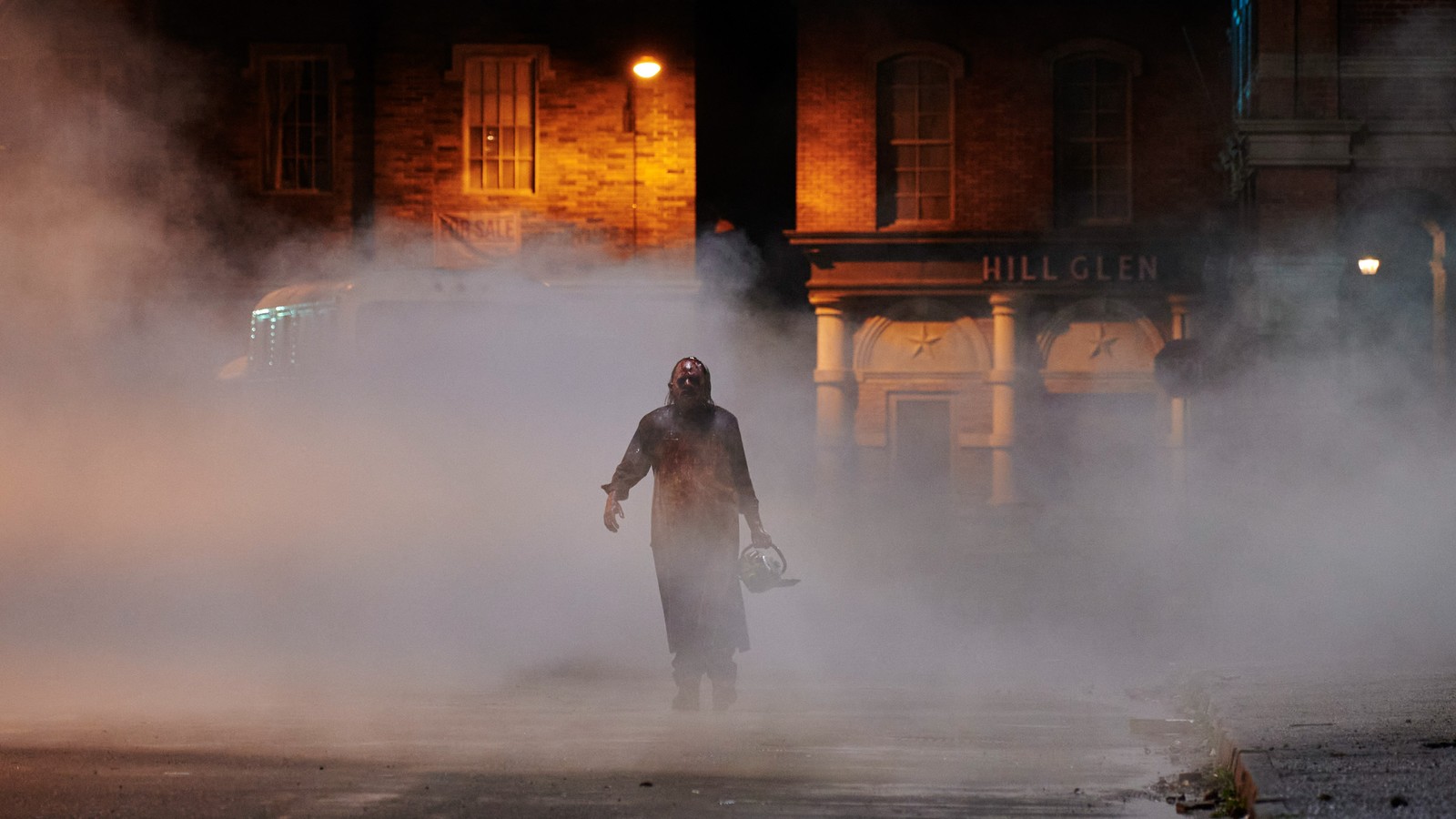 Nearly fifty years after the killing spree depicted in The Texas Chainsaw Massacre, a group of young entrepreneurs, led by Dante (Jacob Latimore – The Maze Runner) and Melody (Sarah Yarkin – Happy Death Day 2U), and accompanied by Dante’s girlfriend Ruth (Nell Hudson – Victoria) and Mel’s sister Lila (Elsie Fisher – Despicable Me), arrive at the supposedly abandoned Texas town of Harlow, where they plan to auction off old properties to create a new, vibrant gentrified population. Upon arrival, they discover an old woman, Ginny (Alice Krige – Star Trek: First Contact), still living in a run-down old orphanage; after a short argument, the old woman collapses and is taken away by the police to get medical aid; the old woman is accompanied by her hulking brute of a son (Mark Burnham), and whereupon the woman dies suddenly, the son begins a brutal killing spree that takes out almost everyone. Not even the arrival of Sally Hardesty (Olwen Fouere – Mandy, Fantastic Beasts: The Crimes of Grindelwald), the only survivor of Leatherface’s original spree, can prevent the chainsaw-wielding monster from carrying out his own particular brand of Texan justice. 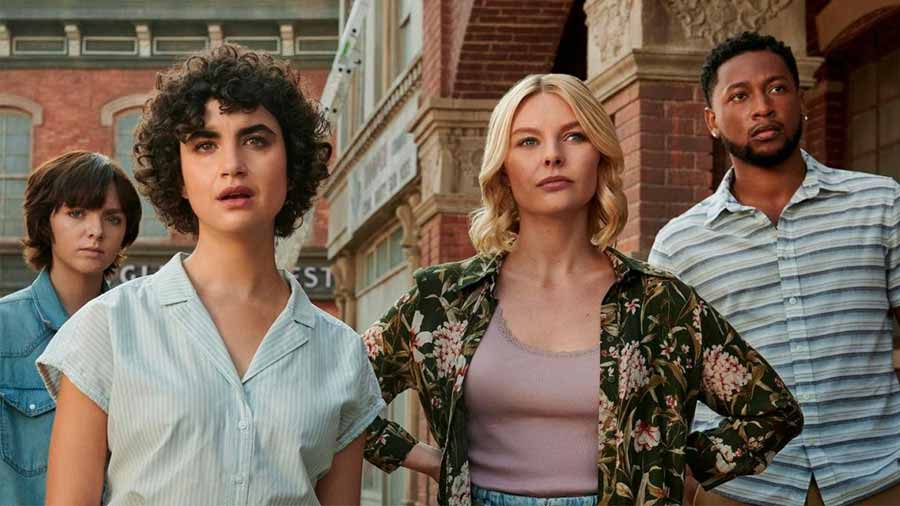 Netflix’ Texas Chainsaw Massacre isn’t the first time the franchise has tried to directly link a subsequent film directly to Hooper’s original. 2017’s Leatherface took a prequel route, trying to propagate a backstory to the franchise’s legendary Big Bad. Heck, even the maligned 2013 entry, Texas Chainsaw 3D, linked to the original using a generational hook to seem cleverer than it really was. I still say that 2003’s Jessica Biel-led remake remains the most terrifying film in the franchise after the first, and even then the cracks continued to show. The problem with the franchise as a whole is that its titular villain, Leatherface, blends in too deeply to the likes of similar psychopathic killers, such as Michael Myers or Jason Voorhees, hulking brutes prone to wanton violence and possessing incredible strength and, invariably, resistance to death themselves. Unlike later entries into the Halloween or Friday The 13th franchises, Texas Chainsaw has largely avoided turning its central monster into some supernatural, superpowered gargantua, sending him into space or turning him into a robot, content instead to continue the subgenre trope of having him simply hunt down and slaughter an abattoir’s worth of nubile youngsters and frail oldsters for no reason other than he can. 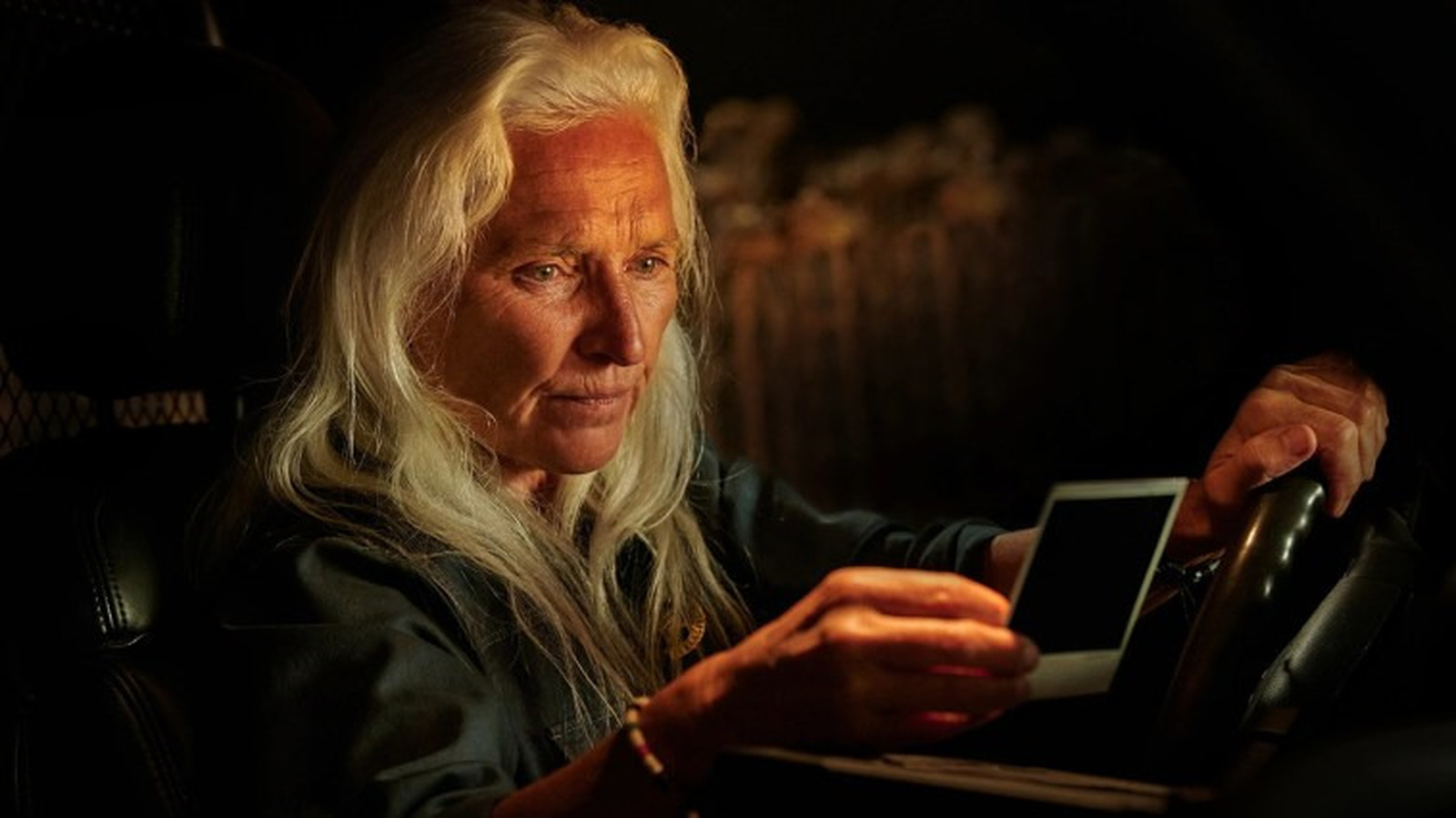 Scripted by Chris Thomas Devlin, from a story by co-producers Rodo Sayagues and Fede Alvarez (both masterminds behind the Don’t Breathe franchise), Texas Chainsaw Massacre takes the well known trope of thrusting know-it-all youngsters – in this case, social media influencers and entrepreneurs – into an isolated location with no real escape route, a lack of law enforcement assistance, and an oncoming storm (truly, the film is in no way subtle with its visual tip-offs) before unleashing the vengeful Leatherface to take them all down. It’s a film of preposterous stupidity, of vacillating logic and reason, and of vastly predictable horror. Truthfully, a lot of the jump-scares gotcha moments aren’t very scary, telegraphed by a pulsating score (by orchestrator Colin Stetson, perhaps the most Texan-sounding person working on the film) and lensed by Ricardo Diaz by the light of a soft blue moon for the film’s protracted evening footage, offset by the crisp urine-yellow bleached sunlight of a Texan daytime. 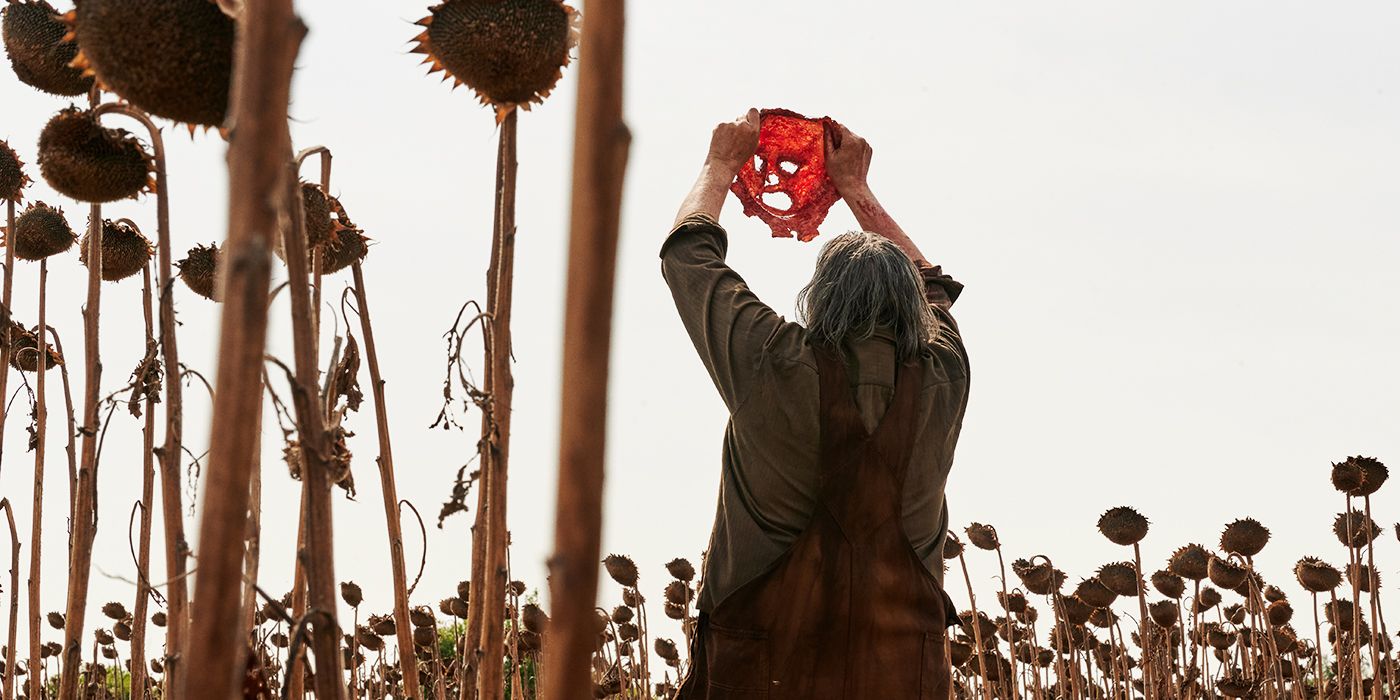 The sense of menace afforded Leatherface himself waxes and wanes depending largely on the reactions, and actions, of the ensemble cast around him, particularly people who should know better, such as various policemen and Olwen Fouere’s terrible repurposing of Jamie Lee Curtis’ hard-bitten work in the recent Halloween remakes, playing the surviving member of the original film’s roster of victims, Sally Hardesty. Hardesty, who has used exactly none of the intervening years training herself up to take down a far larger and more powerful creature than she seems to recall, lasts about three minutes against her old foe. Once ol’ Leatherface decides to go on his rampage, the film’s sense of elevated menace evaporates in a blaze of jumpy quick cuts, out-of-focus gore and gratuitous sound effects, none more prominent than the chainsaw the character uses to slice through the various characters here. It isn’t that the film doesn’t have grisly fun with the various violence inflicted within, it’s just that the audience doesn’t get a chance to give a shit about these people before they’re hacked to pieces. A lot of the complaints about big-budget VFX films – that they’re largely eye candy with no substance beneath the snazzy visuals – plays just as well with horror films when it comes to poor writing; in order for us to feel that sense of threat, we first have to care about the people in the story, and to a large degree modern horror has evacuated decent characters for the sake of gore-porn and unsatisfying depravity. If your characters are empty, joyless avatars simply there to be slaughtered, the yawns begin almost immediately. If there are no stakes, there’s no interest. 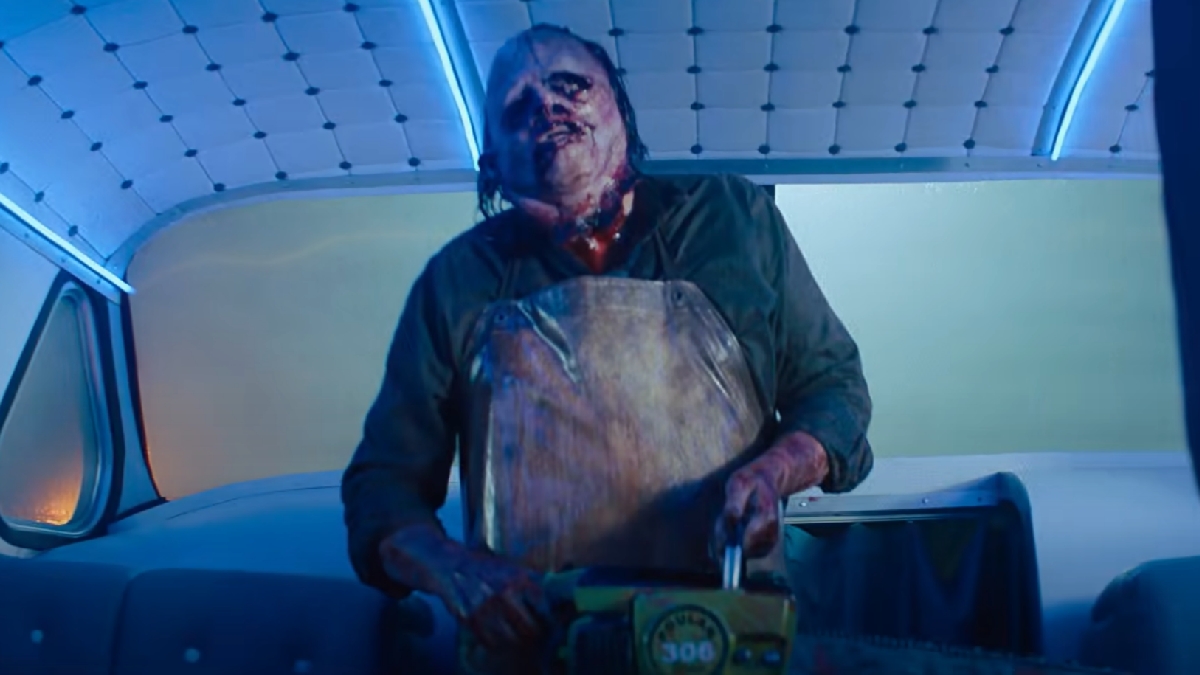 Part of the reason for the success of Hooper’s grimy original was its low-budget look, use of lower grade film stock and avant-garde style used to transport the viewer into the heated Texan otherworld, which crystallised into the preferred look of an entire genre of film – most of the time, horror films were shot on a shoestring budget, and the inventiveness of many filmmakers to overcome these financial deficiencies resulted in some of the most effective and memorable entries into the pantheon in spite of restrictions. Unfortunately, a lot of modern horror is now shot on far bigger budgets comparatively, affording filmmakers a larger degree of control over the final product, which comes with a sense of freedom to do whatever they want – not whatever the budget will afford. With a decent budget to accomplish all manner of trick photography, clever cutting and Dolby Atmos sound to approximate the reality of being in the town of Harlow (the film was actually shot in Bulgaria), Texas Chainsaw Massacre comes with modern advantages Tobe Hooper never got back in the 70’s. Unfortunately, director David Blue Garcia wastes a perfectly adequate setup to deliver a routine, dispiriting and dour affair that had all the potential in the world. 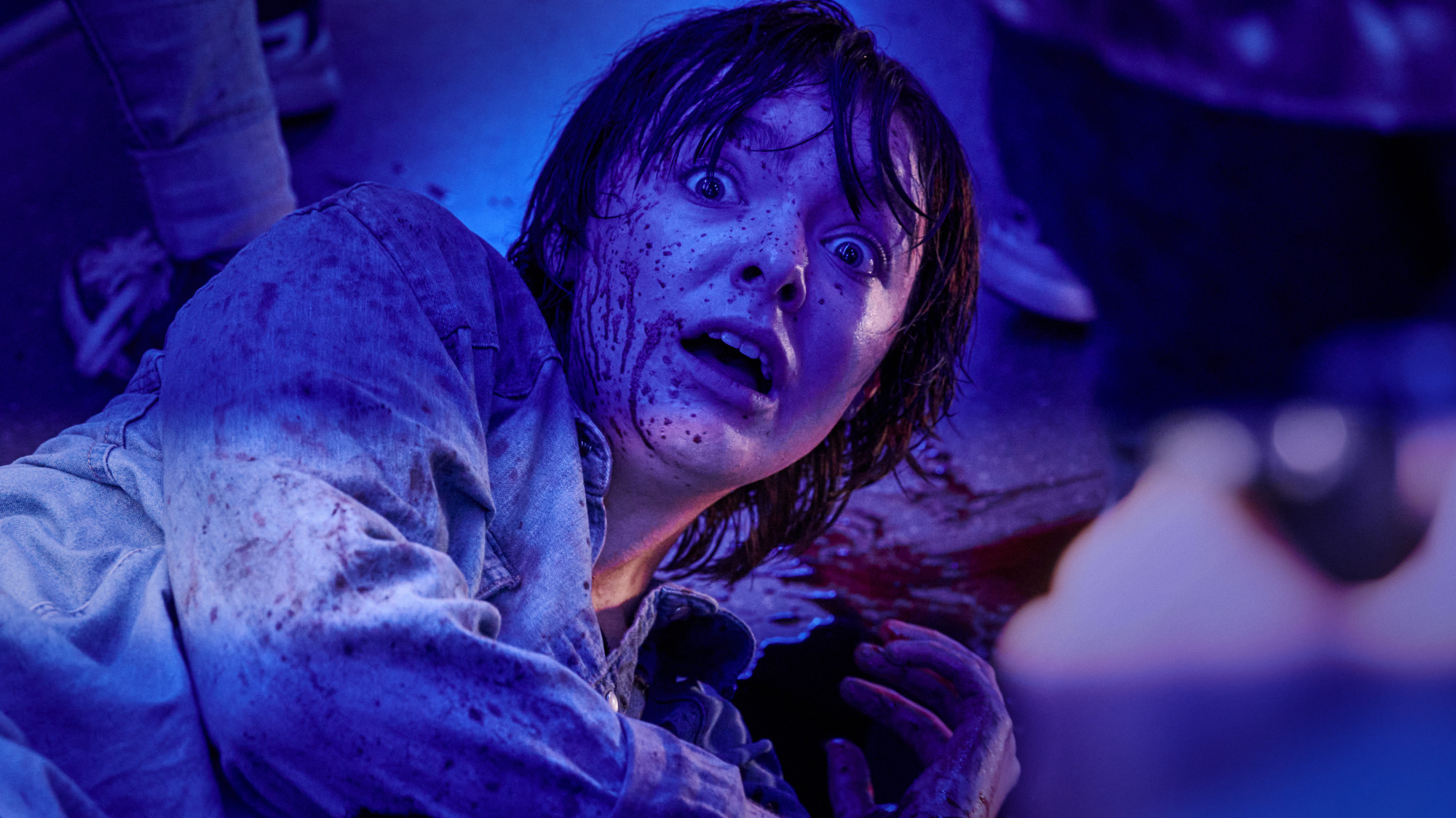 One of the central characters, Elsie Fisher’s Lila, is a school shooting survivor, and this theme is incredibly prescient given America’s proclivity for guns. Obviously, Texas being an open-carry Red State makes it all the more effective a statement to have a shooting survivor within the context of a slasher film like this, but do you think the writers or director make any real headway with this subject matter? Not at all; poor Lila has momentary flashbacks of lying on her school floor, the dead all around her, but the film isn’t strong enough to really contrast this with the brutal chainsaw slaughter occurring all around her. It’s a brief and delicately poised glimpse into promising storytelling that is promptly ejected from prominence once Mark Burnham’s Leatherface starts winding up the weapons. Lila’s sister, the bobble-headed Melody, is a schizophrenic character in many ways, arriving in Harlow with all the enthusiasm for Dante’s project as anyone before abruptly about-facing it and descending into being the Negative Nancy almost immediately; the character also suffers from some of the dumbest decisions a person in a horror film could make, stupefyingly questionable intelligence making her a prime candidate to be offed as quickly as possible. 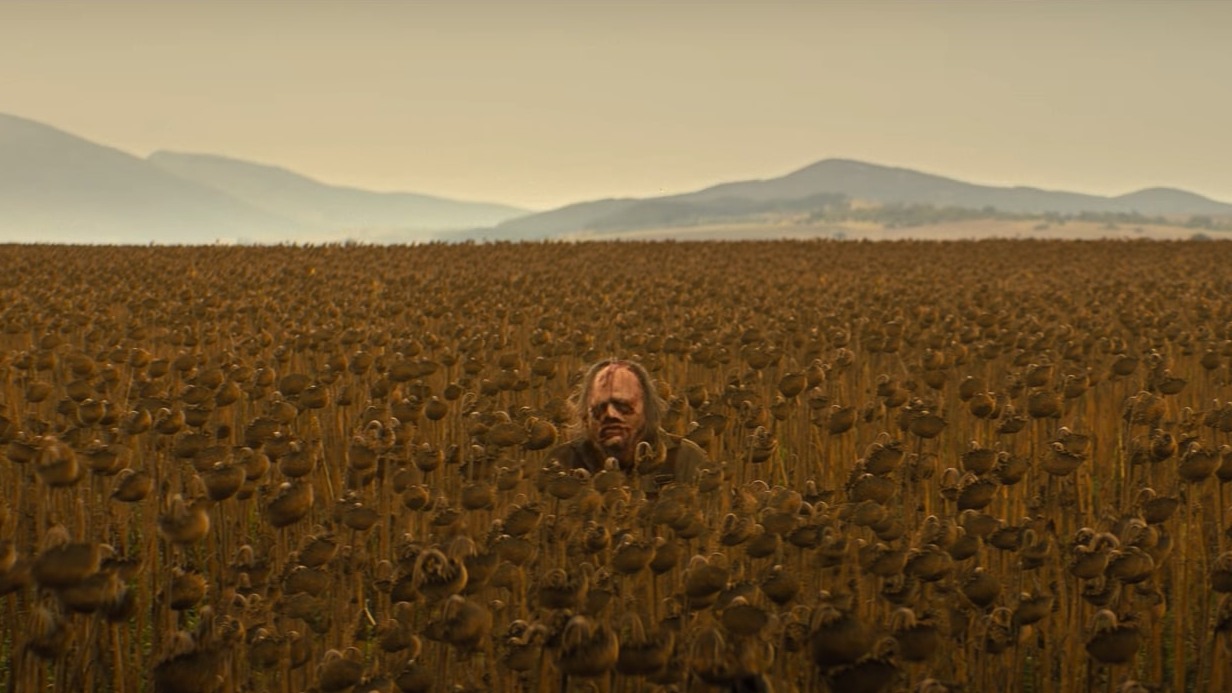 Sadly, there are other, even more stupid people around her and they tend to be killed first. Most of them are all wedged inside a bus, a bus in which one of the film’s most laughable sequences occurs whereby Leatherface boards to commit his atrocities and is given almost free reign to just hack and slash anyone within distance of his chainsaw. Logic and reason are jettisoned in favour of darkened, sour-tasting horror tropes with bodily violence inflicted, and at no point beyond the first twenty minutes of the film does Garcia give us any real iconic moments, any pauses to catch our breath and savour the deliciously devious murderization occurring throughout. This is textbook, perfunctory horror, rousing gore-porn for the salivating, but torturously laboured for those seeking at least a modicum of intelligence or character development in the story. All great horror films have at least one great character to invest in (typically it’s a smart young girl or occasionally a studly young dude) but in this, outside of a ruined Lila agog at the sudden spree killing involved, none of the characters engage us as viewers at all. In fact, part of me was happy Leatherface was just mowing them down, because it sure as shit was keeping the gene pool a little cleaner. 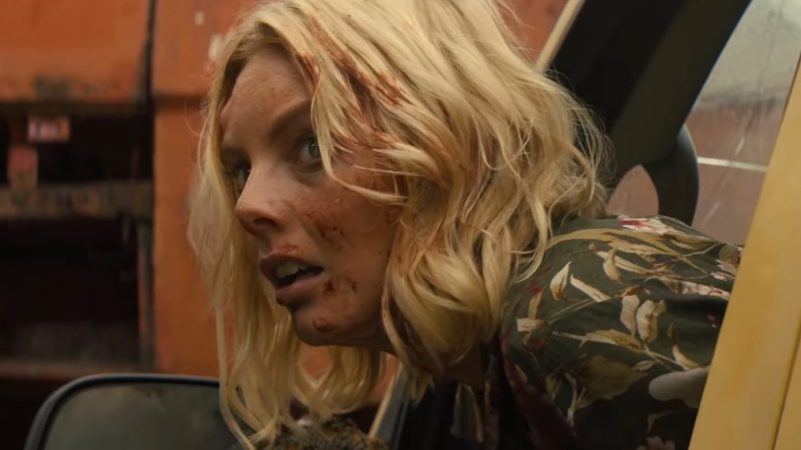 Texas Chainsaw Massacre is a derivative, sloppy horror entry that defeats the purpose of its own existence. It serves as yet another direct sequel to Hooper’s legendary classic, attempts to mythologise further the one-note character of Leatherface but offers no tangible emotional hook to invest in and make us care about these people, nor any inventive or memorable kill sequence that actually makes you pause and shudder. The aforementioned on-the-bus slaughter is laughably idiotic, several characters make bad decisions after bad decisions, and the filmmakers treat Leatherface as a figurehead without reverence. It should be noted that imbuing Leatherface with a motivation actually removes a lot of the inherent tension of the character; in revealing more about his character, we understand his reasoning, and consequently empathise with him. Leatherface – hell, any legitimate slasher-horror monster – should be terrifying simply because we can’t understand his reasoning; he should be an implacable, unreasoning force of nature and in this instance, they’ve neutered him a little too much. Fans of gore effects and headache-inducing editorial choices will be well served with this mishmash of a horror homogeny. Those seeking more than lame jump scares and screeching, limb-shattering body horror will find Texas Chainsaw Massacre a convoluted, uninteresting and vastly inferior slog.