A coagulative bastardisation of Mitchells Vs The Machines, Next Gen and Big Hero 6, Disney’s Ron’s Gone Wrong is another “technology creep” film masquerading as kid’s entertainment whilst its true purpose is to warn youngsters about the perils of online obsessiveness. With social media being the great scourge of the new millennium, Ron’s Gone Wrong has a blunt-force message about the differences between online popularity and real-world anxieties, delivers it well enough to satisfy earnest kids watching, and presents the kind of warm-fuzzy resolution so absent in today’s society. Although it pales in comparison to the aforementioned movies of similar tone and story, Ron’s Gone Wrong is liteweight fare offering suitably undiscerning weekend viewing that is about as inoffensive as possible; a harder critic might suggest the film doesn’t go hard enough to elicit a reactionary response to its “social media can be bad” underpinning, but for a movie aimed squarely at youngsters likely clamouring for a new smartphone or tablet from their parents for Christmas, it serves its purpose. 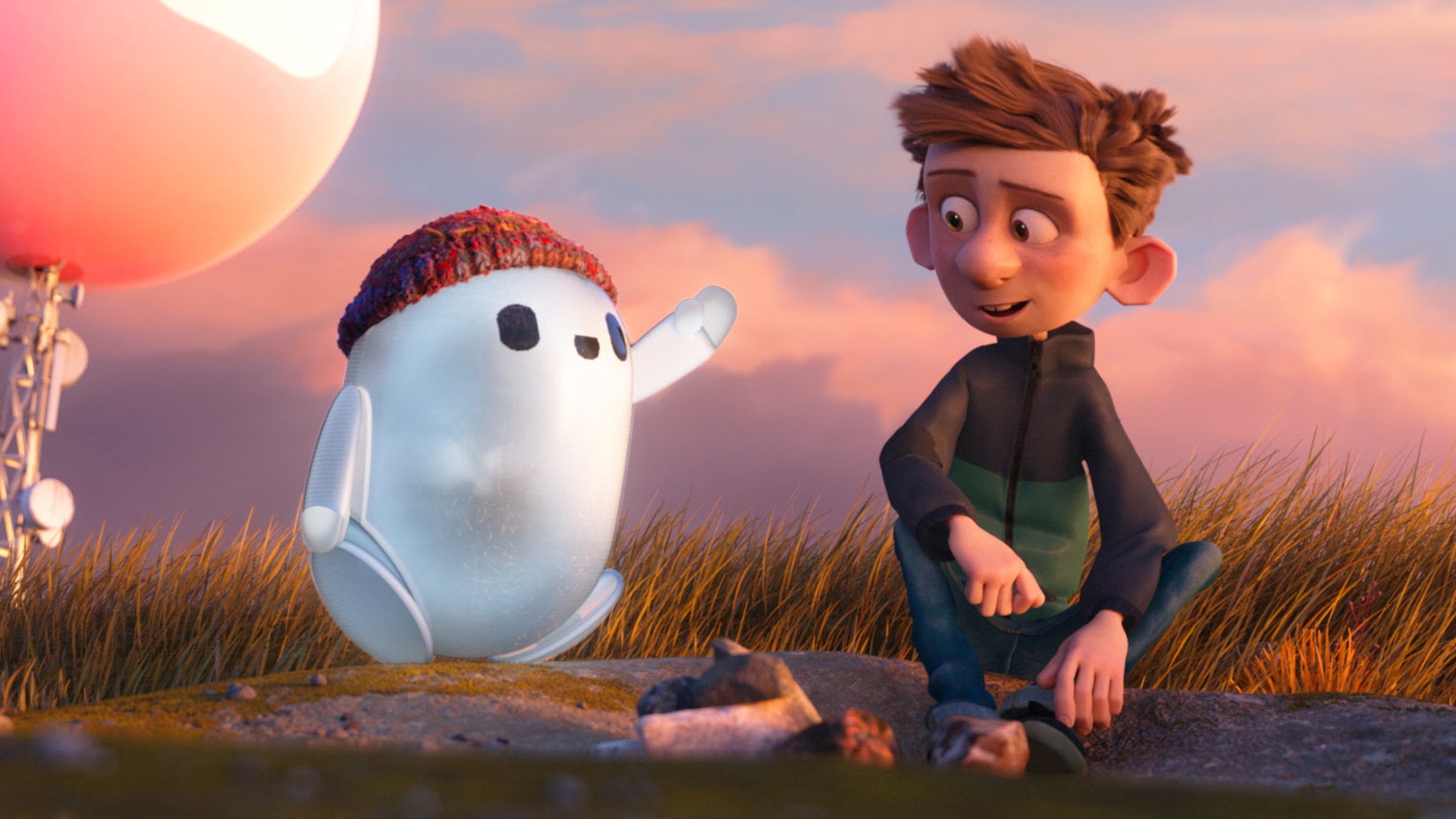 Young middleschooler Barney Pudowski (Jack Dylan Grazer – Shazam) dreams of having his own B-bot, a ubiquitous robot buddy created by Bubble CEO Marc Weidell (Justice Smith) designed for the ultimate in social interaction. Everyone at Barney’s school has one, although his father, online novelty item seller Graham (Ed Helms – The Hangover) lacks the funds to purchase one. After inadvertently obtaining a broken B-bot, Graham gives it to Barney, who promptly recognises the bot is defective and initially wants to return it. The bot, nicknamed Ron (Zack Galifainakis – Between Two Ferns) by Barney, slowly begins to learn about the world around him via trial and error, lacking the inhibitors provided upon activation thanks to a failed upload to the Bubblenet. After creating an incident at school, Barney and Ron flee, while also forcing Bubble COO, Andrew (Rob Delaney) to assume control of the company in order to prevent the out-of-control bot from destroying the company’s share price. 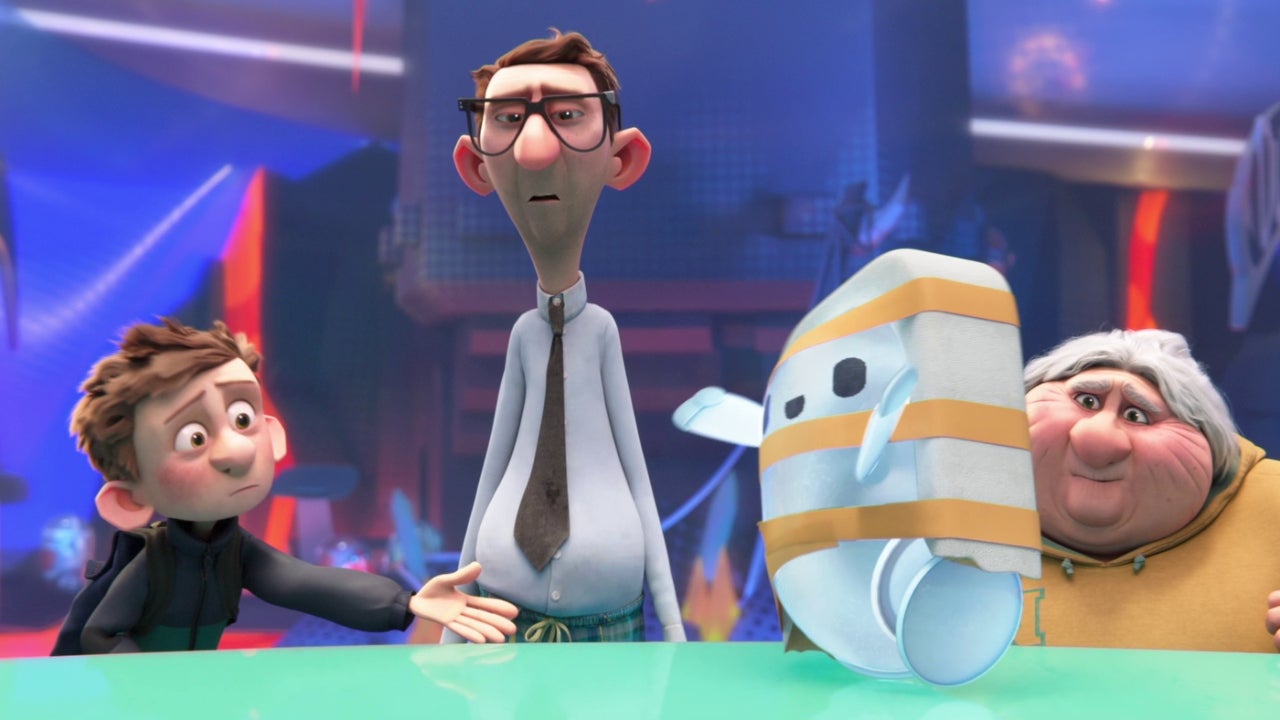 Look, Ron’s Gone Wrong isn’t terrible. Had it not stepped firmly into the shadow of The Mitchells Vs The Machines, it would perhaps be touted as a middling family classic. Unfortunately, Netflix’ Mitchells Vs The Machines is a far superior film about fairly similar themes, and Ron’s Gone Wrong hasn’t the hefty comedic heart-and-soul to emerge from behind it. This shouldn’t be considered a negative but, sadly, given the release proximity between the two films it’s impossible to consider one without at least referencing the other. Written by Peter Baynham and Sarah Smith, Ron’s Gone Wrong has a solid story, a sweet ensemble roster of supporting characters, and a cool design for its central character (although owing a heck of a lot to EVE from Wall-E), not to mention a terrific voice cast, so the building blocks of the film’s success are there to be had. The animation used on the film isn’t far different from that of a current Pixar or Disney Animation stylised look, with rounded features and slick visual effects the now typical stock-in-trade of CG animation studios. All this makes the film incredibly accessible, and its aimed squarely at the audience it wants to get its message to: impressionable young technology users. 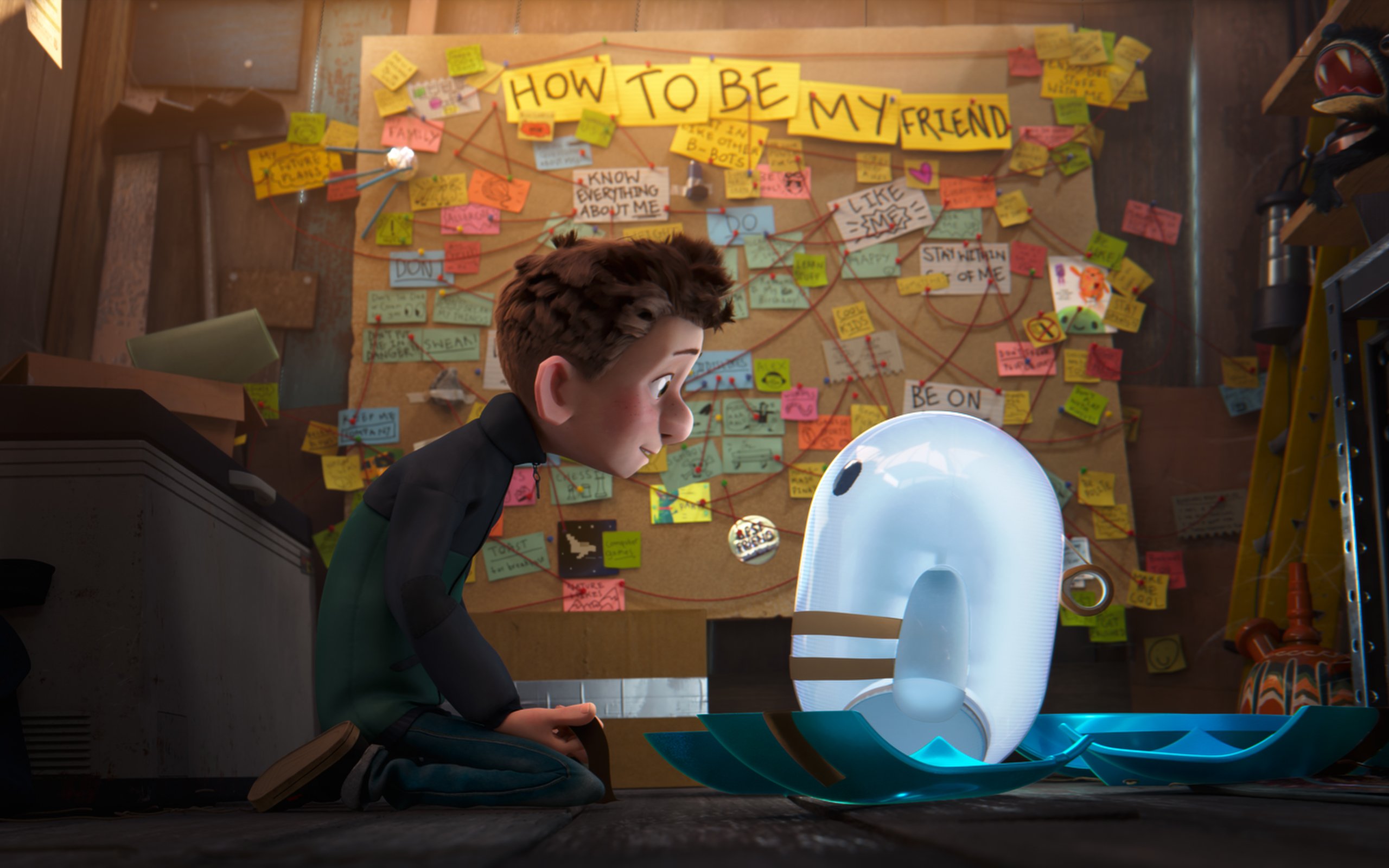 Adult viewers will find Ron’s Gone Wrong a touch too heavy-handed and obnoxious with its messaging, and there’s not a lot of humour or story subtext aimed at those over the age of about fourteen. This will make rewatching the film a tough slog for adults, although kids will no doubt align with both Barney, his school chums Savannah (Kylie Cantrall), Rich (Ricardo Hurtardo) and Noah (Cullen McCarthy) as much as they do with Ron himself. Zack Galifianakis is nearly unrecognisable as the suppository-shaped proto-bot, representative of all dangers the internet engages with for young users – the ubiquity and dangers of social media fame, for example, are personified by Savannah’s unfortunate appearance on an global meme that trends significantly – and while clearly riffing off the child-befriending-an-outsider trope the film’s heartfelt friendship between robot and human is quite sweetly developed. Jack Dylan Grazer’s earnest vocal performance as Barney (the film is set in the 2040’s, who the hell is naming their kid Barney?) is nice enough, while Rob Delaney’s on-the-nose take on Mark Zuckerberg as a fascist company commander is way too cringey to work properly. Ed Helms and Olivia Colman (namecheck from Mitchells Vs The Machines?) offer serviceable work as Barney’s father and grandmother respectively, and Justice Smith (Pokemon: Detective Pikachu) plays the role of Bubble’s philanthropic CEO with the enthusiasm modern tech-leaders like to present to the public.

There’s elements of story from The Emoji Movie, Ralph Breaks The Internet and Tron within Ron’s Gone Wrong’s technology-centric framework, although you have to really squint to find it (adult viewers will feel the all-encompassing sense of familiarity with a lot of this film’s characters and story) and I think the direction of both vocals and animation is generally excellent without being exceptional. There’s nothing to really separate Ron’s Gone Wrong from a hundred other animated films of its kind, purloining elements of other stories in order to cobble together a predictable and urbane thematic diaspora surrounding technology and its pervasiveness within current society. Holding a mirror up to the likes of Facebook, Twitter and Instagram, Ron’s Gone Wrong is the most prosaic form of storytelling a film might offer, which is disappointing considering the talent involved. I guess having an open checkbook for star-power casting isn’t always indicative of the quality of the script. 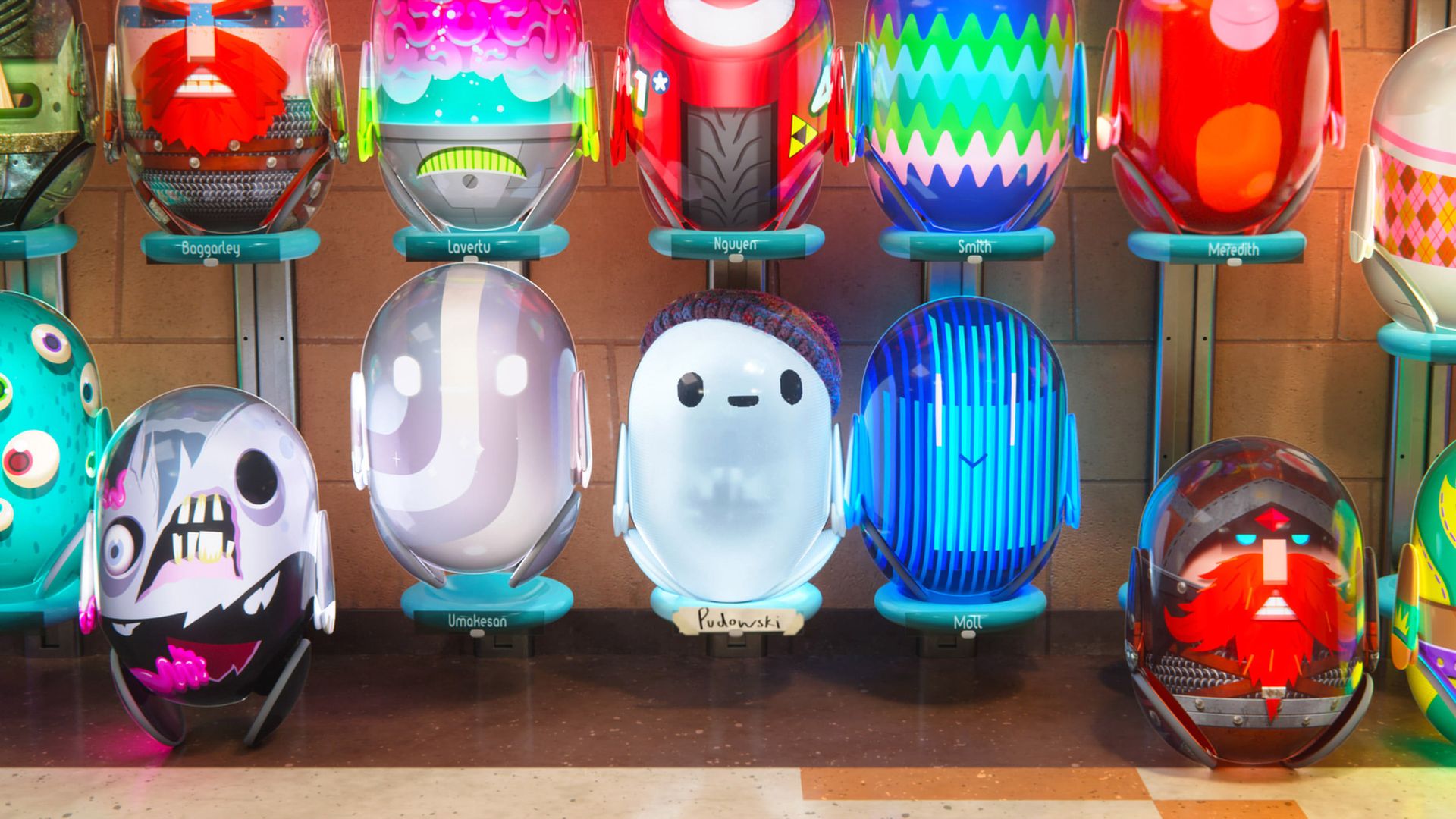 Ron’s Gone Wrong is the perfect “loose end” movie, something to watch when there’s not really much else to do. It’s markedly unambiguous with its messaging, pleasantly comforting in its predictability, and assuredly polished in both vocal and animation elements. That it lands without so much as a shiver of originality makes the end result a touch disheartening to older viewers, but young kids just starting their online journey will no doubt find a lot to engage with, or in, with Ron’s Gone Wrong‘s insta-fame mentality. Personally, I found it a mild diversion, while my young kids had a raucous time with the zappity-zap energy of the film’s enthusiastic, if misplaced, tempo. Ron’s Gone Wrong is harmless social-media influencer fun, a decent message misaligned with a too-obvious tone.