Gosh, this film was a missed opportunity. In trying to be too many things at once, Netflix’ The Dig’s quiet, melancholy moodiness and antipathetic emotional core make for a sweetly filmed but ultimately unrewarding non-Indiana Jones archaeology lesson. Blessed with a stellar cast – let me just say that casting acting king Ken Stott in your film is a sure-fire way to get me interested – and a sublime visual sensibility (more on this later), the ingredients of The Dig say more about how uneven and unwilling the movie turns out to be than anything else; Aussie director Simon Stone helms a film about an English historical find and tries to mix in a romantic sublot far to late and with far too little effort, turning what could have been a nice little historical drama into a saccharine and cloying three-way of diluted emotional vacancy. 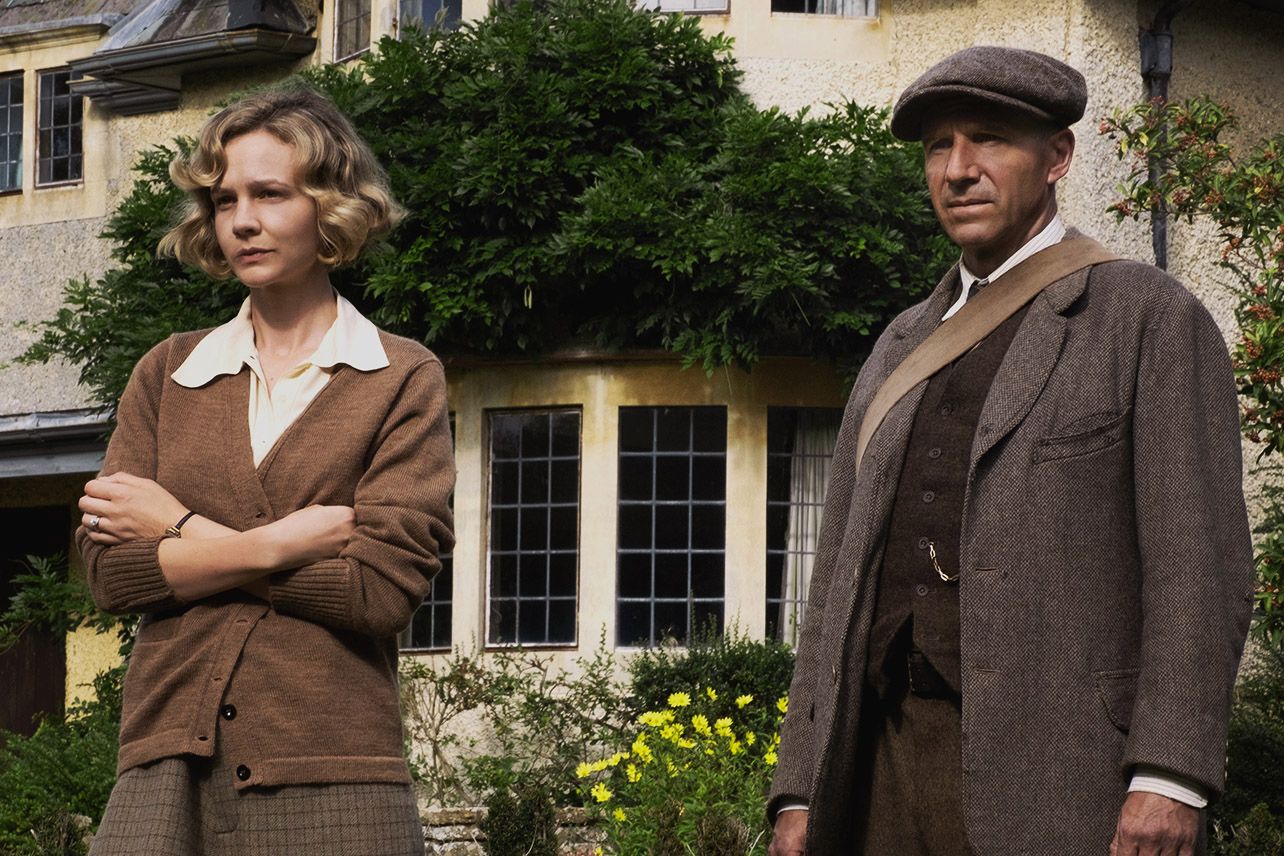 Set in Britain mere months before Germany invades Poland in 1939, the film recounts the true story of the archaeological discovery of anglo-saxon artefacts buried beneath funeral mounds on the Suffolk estate of Sutton Hoo, owned by widower Edith Pretty (Carey Mulligan – Promising Young Woman), who is of ill-health much to the resentment of young son Robert (Archie Barnes). Edith secures the employment of local amateur excavator Basil Brown (Ralph Fiennes – Schindler’s List) to dig into the mounds to see what lies beneath them, only for him to discover an ancient wooden ship, some 80 feet long, lying there and filled with treasures of such importance it naturally draws national interest, particularly from the British Museum, who send learned scholar Charles Phillips (Ken Stott – Plunkett & Macleane) and a team of scientists to continue to work under his auspices. Accompanying him are husband-and-wife Stuart and Peggy Piggot (Ben Chaplin and Lily James, respectively), while Edith’s cousin, Rory Lomax (Johnny Flynn – Emma), provides photographic cataloguing of the event. 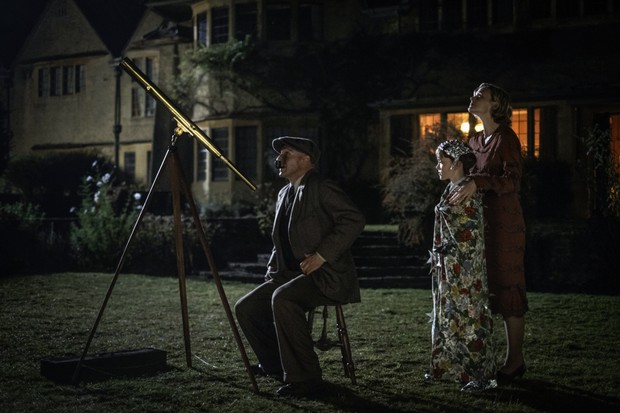 I was drawn to the story of The Dig because I have long been a fan of archaeology and world history, more specifically European history. The story of Sutton Hoo and the remarkable chronology-changing discovery made there is the stuff of legend, and to see it brought to life was something I always had as a must-see purely from a real-world sense of curiosity. To see it handled in the way Simon Stone’s film does is frustrating, with the potentially engrossing human drama at play subsumed by a ridiculous romance subplot and a shifting focus on who we might consider the main characters. The film opens with the fascinating friendship between Edith Pretty and Basil Brown, and that between Basil and Edith’s son Robert, who sees something of a father-figure in the older man given Edith’s husband Frank passed away some five years prior to the events of this film, in 1934. The bucolic nature of Stone’s direction resembles a melding of styles somewhere between Terrence Malick and David Lowery, and there’s a placid realism to the story’s opening act that works quite well. You start to think the focus of the film sits squarely on the three early leads, this familial triangle that, thanks mainly to Fiennes’ stoic work, will lead to some kind of emotional catharsis. 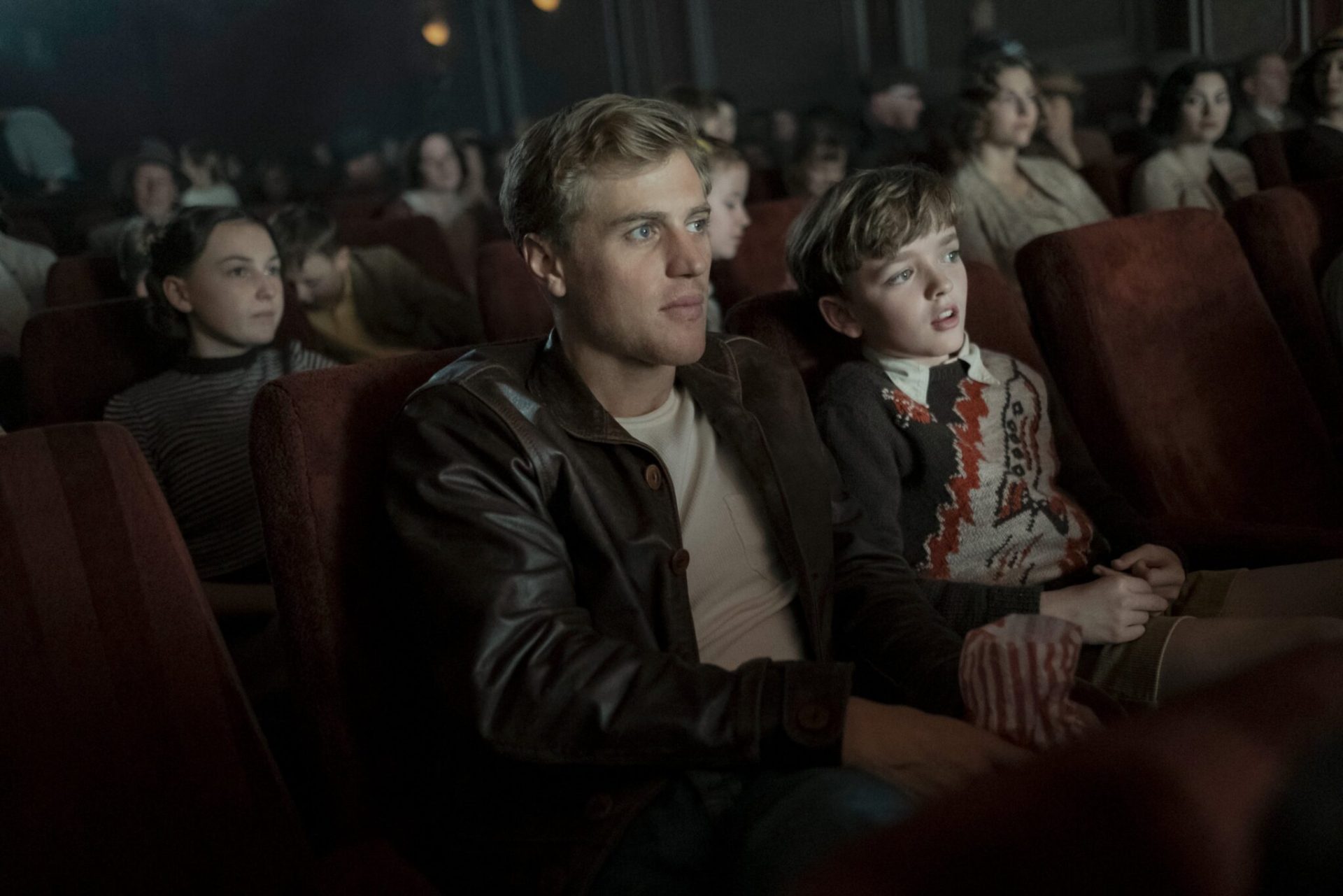 But then things take a turn, and not necessarily for the better. About half way through we’re suddenly introduced to a slew of new characters, including Ken Stott’s bulging-eyed Charles Phillips who could have been a real stick-in-the-mud antagonist but, blessedly, is written so as to be a reasonable, well-intentioned scholar whose only thought is to the capturing of Sutton Hoo’s knowledge accurately and safely. The film leaps into the second “love triangle” of the movie, that between Lily James’ Peggy, who is badly neglected by her obviously closeted homosexual husband, Stuart, and Edith’s cousin Rory. Now, I’m not annoyed because they decided to introduce a romantic element to the film, but the fact it comes well into the movie and absolutely flatlines the work of Fiennes, Mulligan and Barnes is a real misstep by writer Moira Buffini. There’s a noticeable shift when the film moves away from Basil and Edith’s friendship, casting them into the shadowy background as the “more interesting” romance elements start to manifest. Had the romance aspect of The Dig started earlier, or been a more prominent element of the film’s mandate, things might have worked, but The Dig starts with its head turned in one direction before whiplash swings it to face another, and the effect is quite jarring. Dammit, you had me invested in Basil, Edith and Robert, and then I have to wade through some marriage issues with Lily James (The Guernsey Literary And Potato Peel Pie Society) and Ben Chaplin for some reason I never understand? I’m a huge fan of Lily James’ work, and Ben Chaplin (Cinderella) ain’t a plank of wood either, but their relationship crisis playing out against the backdrop of impending war and a far more interesting main story (the dig itself) feels mawkish and shoehorned in because somebody felt the main story lacked sex appeal. 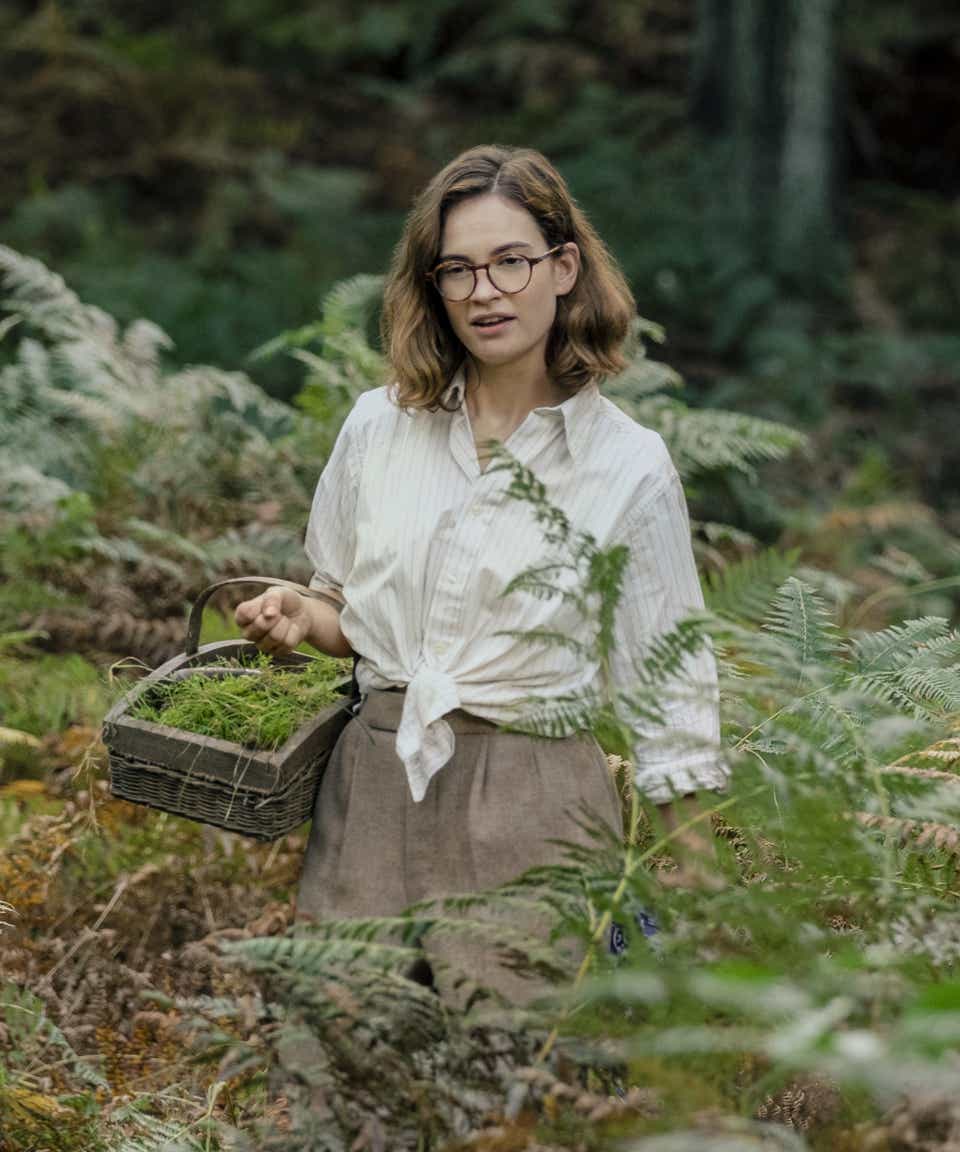 It should be noted that Fiennes holds this film together as best he can despite disappearing from it almost entirely in the latter third. His curmudgeonly performance, against both Archie Barnes, who does superbly well himself, and with his on-screen wife May, portrayed by Monica Dolan, is as endearing as it is wasted by Simon Stone’s refusal to spend more time on it. Character development started early on between the three main leads falters and fades as the onset of war looms; a little moment between Robert and Basil, where the latter teaches the former some basic astronomy via a telescope, is never paid off by the end of the film, either plot-wise or emotionally, and Edith’s friendship with Basil, which looms large early on, is grounded by the arrival of our second-half interlopers. Darn it I was enjoying the Fiennes-Mulligan-Barnes tryptic, and then they had to go ruin it. 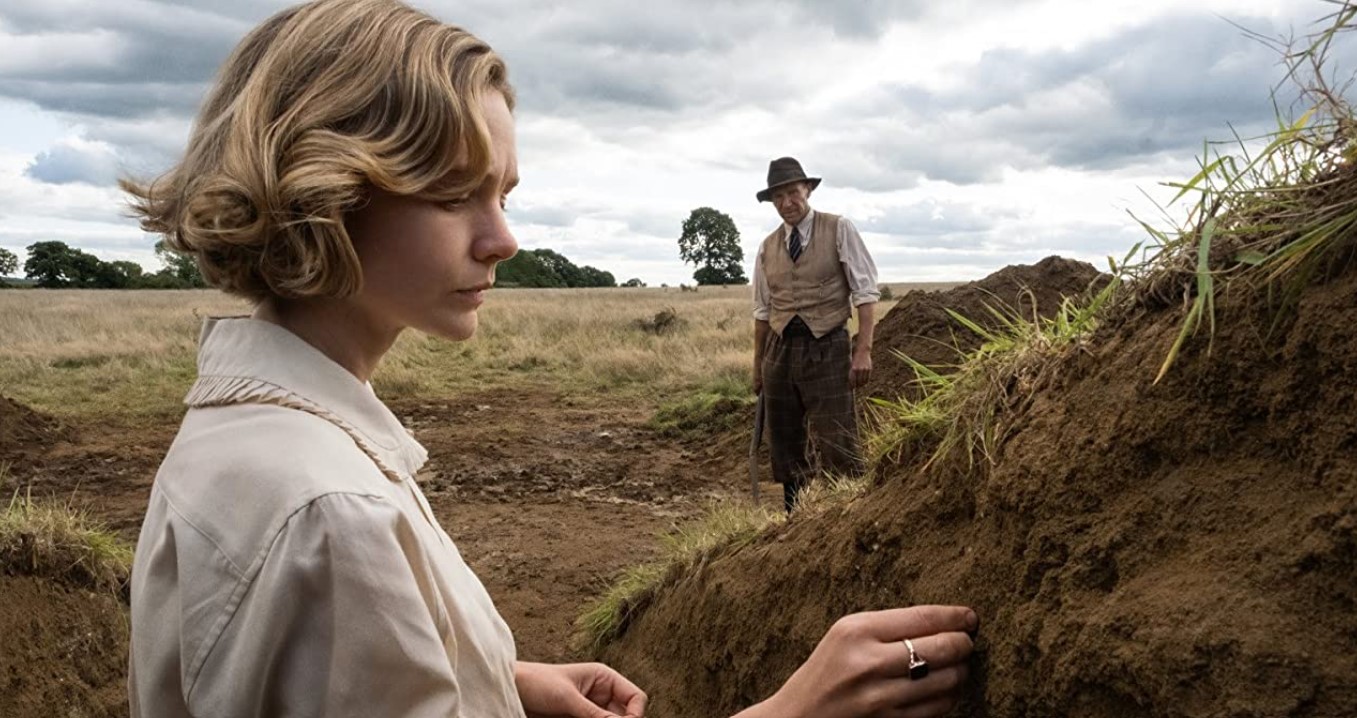 If nothing else, The Dig is wonderfully filmed. The cinematography is often hand-held by DP Mike Eley, who captures the sunset hour with absolute perfection and drenches the film in a bizarrely vibrant pre-war desaturation. Colours are muted but still pop, if you can call it that way, and while the hand-held camerawork at times can be off-putting (at least initially), it’s a visual motif that draws you into the documentarian flavour of the film and that works well. Another unique aspect to the film’s presentation is Stone’s desire to have voice-over for his characters intercut between them not speaking and them speaking, which may catch casual viewers unawares as it makes you think you’re listening to a narration and not dialogue from the scene at hand. Your mileage on this cinematic artifice will vary; I found it charming, if a touch unsettling. 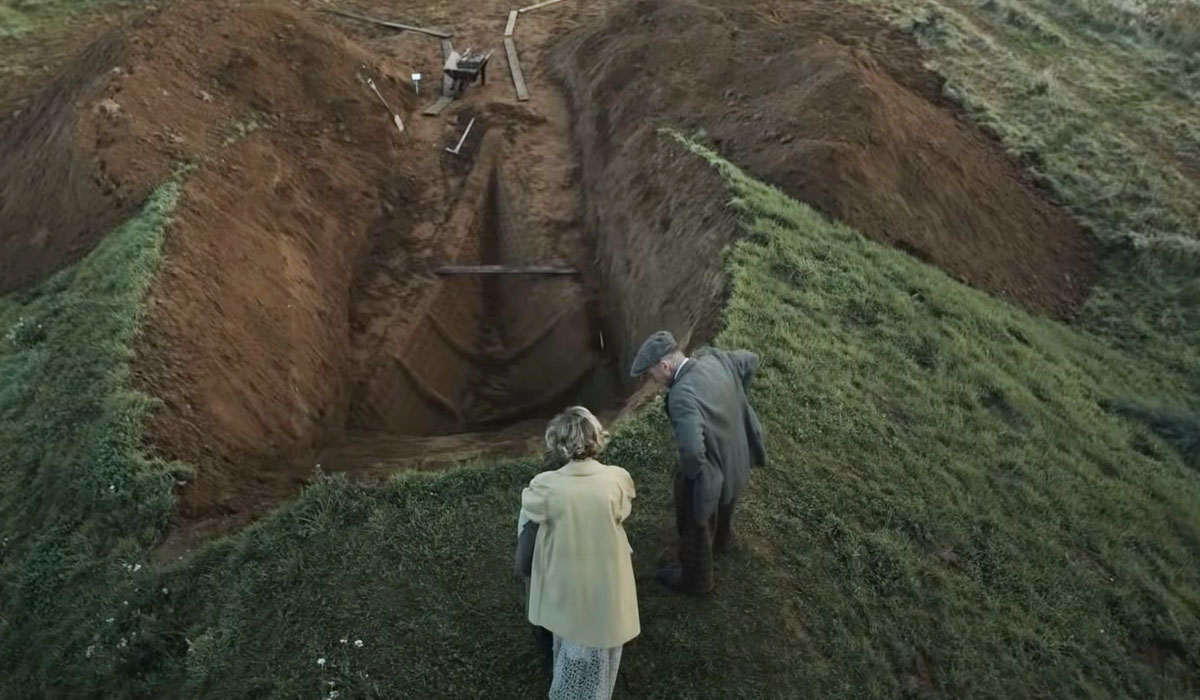 While I did enjoy various elements to The Dig that might work well on their own or balanced out better between each other, sadly the sum of the parts is a film that finds unevenness and a frustrating lack of focus the end result. Had the film gone one way or the other I could understand the approach, but in trying to seesaw between to the two plot arcs at opposing ends of the movie The Dig really does land with a thud. No thanks to the great cast, all of whom do really great work with the material they’re given, but the blame for this middling effort lies squarely with a screenplay that shifts the audience’s interest against their will, and a director unable to thread the romantic subplot between the main plot without creating significant disinterest. The Dig isn’t strong enough with its archaeology elements to buttress the inadequate romantic material and in the end, complete collapse is inevitable.