This review contains key plot spoilers for Teminator: Dark Fate. No further warnings will be given.

The sixth entry into the Terminator film franchise sees creative titan James Cameron (Avatar, Titanic) assume an overseer role whilst Deadpool director Tim Miller helms. To say it’s a blunder of epic proportions is an understatement; although competently made and boasting some excellent (and not-quite so excellent) visual effects, as well as returning franchise players such as Linda Hamilton as an ageing and weary Sarah Connor, the film takes some brave but utterly stupid creative risks that render not only this film a bitter pill to swallow, but goes a long, long way to tarnishing the legacy of Terminator 2, the last truly great film this series has enjoyed. In attempting to pass the baton to new characters and heroes, whereby ensuring the franchise has the latitude to possibly step away from the Sarah and John Connor staleness of recent times, Dark Fate completely forgets to honour those characters meaningfully, instead stomping on the emotional connection we all have for them and jettisoning the care, plot arcs and investment the decades have wrought: all for a sequel that goes badly, terribly, darkly wrong. 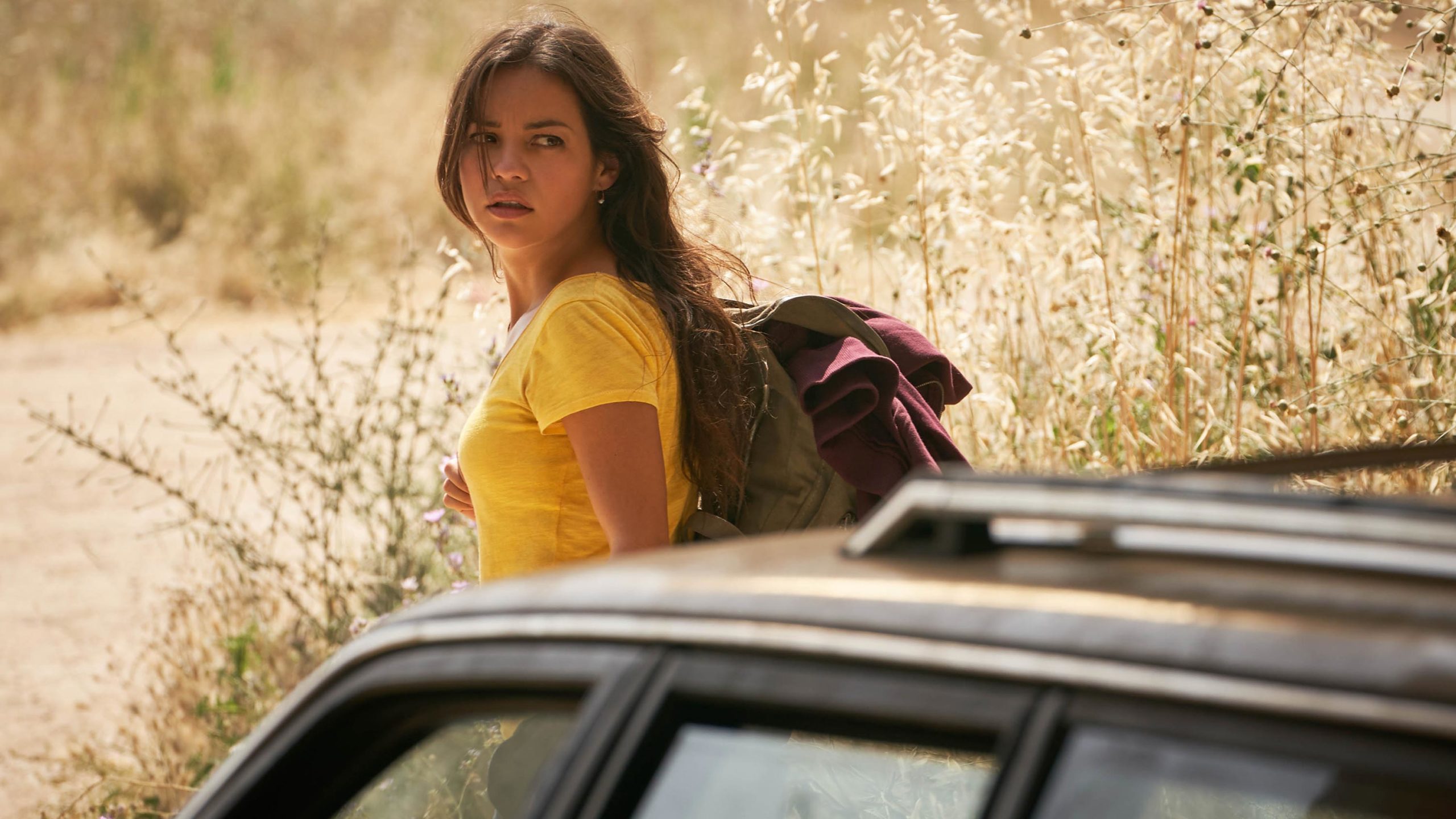 In Mexico City, an advanced Terminator, known as a Rev-9 (Gabriel Luna), is sent back from an apocalyptic future to murder young Daniella “Dani” Ramos (Natalia Reyes). As with most of these films, a protector is also sent back, this time in the form of an augmented female soldier named Grace (Mackenzie Davis), who manages to keep Dani alive despite injuries and a rapidly deteriorating metabolism. After a brutal encounter in which former Terminator hunter Sarah Connor (Linda Hamilton) saves the day, the trio travel across the border into America to locate a mysterious ally, which turns out to be a T800 model terminator now going by the pseudonym Carl (Arnold Schwarzenegger). With the Rev-9 closing in constantly, Dani, Grace and Sarah decide to take a stand to protect the younger girl, in order to save the future (again) and restore an obliterated humanity from the precipice of extinction. 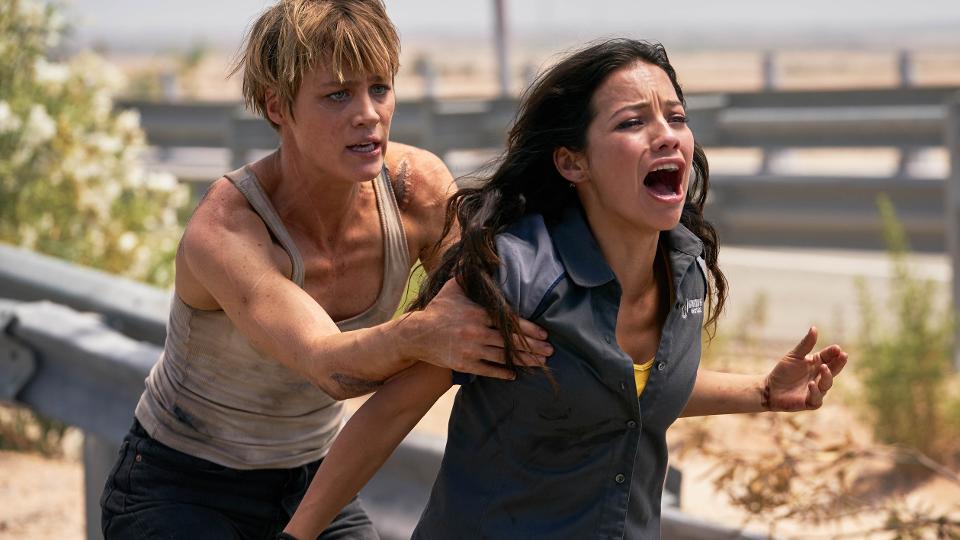 The film opens in the most troubling, shocking (not in a good way) way possible. It begins with the murder of John Connor, the focus of the entirety of the franchise since his inception in the mid 80’s. In true Hollywood style, the likeness of a young Edward Furlong is digitally plastered over a body double (alongside a de-aged Linda Hamilton, as well as a really shitty “young” Schwarzenegger avatar) before he’s promptly dispatched by said terminator thus sending this film into a completely different direction than the one you expect. The idea being that Sarah Connor’s purpose is torn away, following the avoidance of “Judgement Day” in 1997, is inherently an interesting one but because the film doesn’t focus on Hamilton’s bitter, angry apocalypse veteran until about two thirds through, and the inclusion of her as some kind of long-term vigilante doesn’t play with the same vigour her character had in, say, T2. The abrupt death of John Connor is of particular note to the film’s sour tones, as well. Frankly, this is no way for the franchise to handle Connor’s departure from the timeline, being shot in cold blood by another T800. It’s an ignoble death, a footnote to the Connor’s legacy of survival against impossible odds, and the bitterness at Cameron’s approval of this as a story rankles throughout the film’s entirety. It repudiates the conclusion of T2, the film for which this one serves as a direct sequel (retconning Rise of The Machines, Terminator Salvation and Terminator Genisys out of existence) and in doing so seems utterly contemptuous of our investment into the characters of Sarah and John Connor. 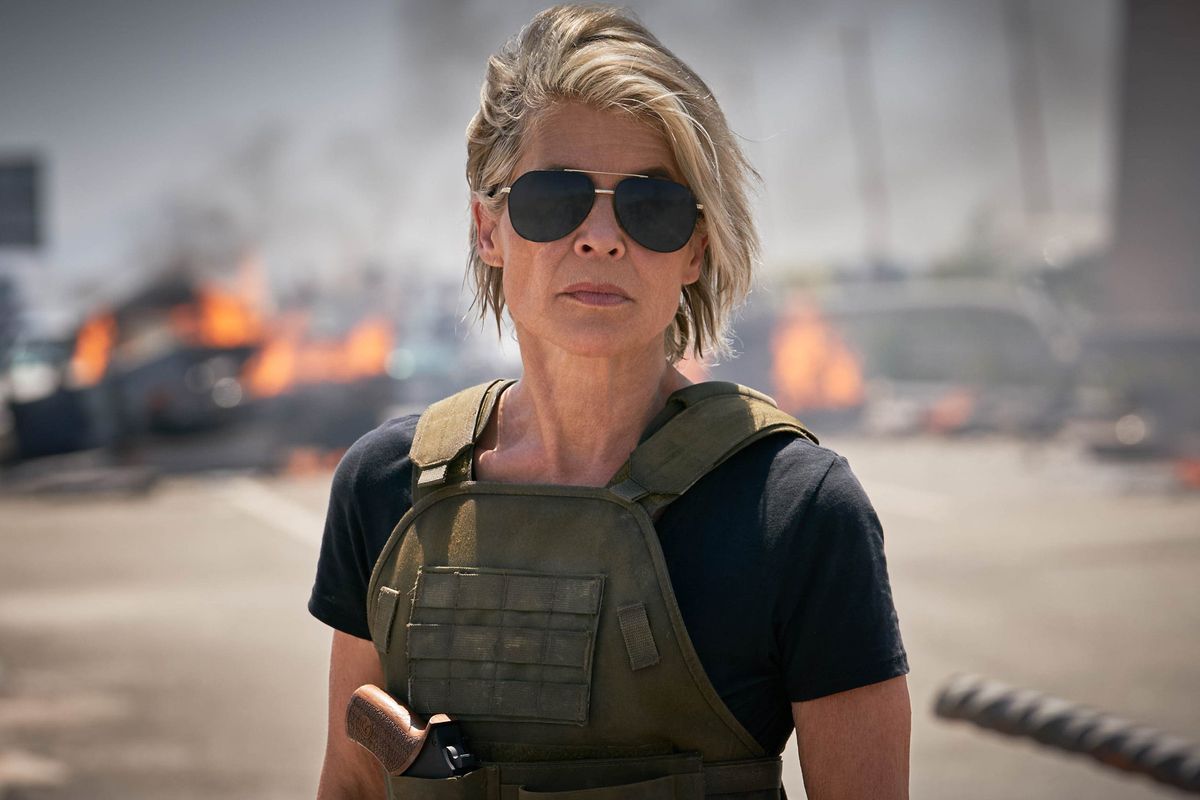 With this dark stain on the opening of the film, director Tim Miller has his work cut out trying to get us to invest in the new characters we’re obviously meant to be following. Dark Fate reprises a lot of T2’s iconic plot points: a young, fresh character filled with promise and life is thrust into a race-n-chase for survival against imminent and implacable death whilst being protected by those with inferior technology. Gabriel Luna’s Rev-9 terminator is a combination of the liquid metal model portrayed by Robert Patrick in T2 and the cool-but-not TX model of Kristanna Loken from Rise Of The Machines, and he makes a formidable adversary for our heroes to combat. He has the ability to separate his outer skin from his interior terminator skeleton, effectively “doubling up” on his attack capabilities, even if the logic behind the tech and its usage isn’t clearly defined. It’s a cool effect, though, and Luna makes the most of what is a fairly rote character now, aided by some decent but unremarkable visual effects – CG has come a long way since T2 revolutionised the industry, and sadly nothing about Dark Fate arrives with the same jaw-dropping benchmark-setting gravitas. 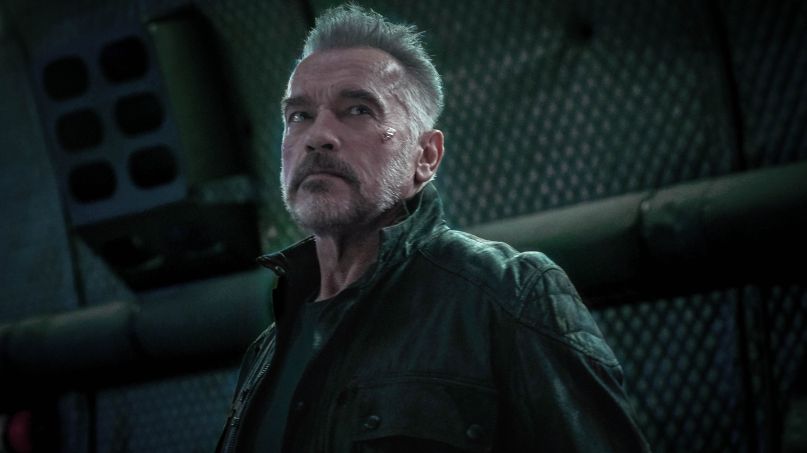 In attempting to reset the franchise, we’re introduced to Natalia Reyes’ innocent and tragic Dani Ramos, a self-described “nobody” who can’t understand why she’s so valuable to humanity that a terminator would come back to kill her. According to the film’s really iffy logic, Ramos’ future involves her leading a rebellion against the machines, who, despite the avoidance of the Judgement Day we all feared in T2, still gain sentience even further into the future, and still ruin the Earth in a man-vs-machine war, and who still develop the ability to send things back through time (convenient? Sure.) to ensure the past… no, the future.. remains intact. As with most films featuring time travel, if you think about things too much it all rips apart at the seams, but with Dark Fate the seams are very weak in the first place so some of the exposition involved works overtime in selling us on this new, alternative timeline where things still turn out shit. Dani Ramos is a better “new” character than Edward Furlong’s John Connor was (and Reyes’ a superior actor in every way) but exactly why she needs to be the new saviour of humanity is a plot device inadequate to the overall impact of the film. I like Natalia Reyes performance here, she’s just stuck in a role that feels all too familiar without the grounding Cameron’s original two films expressed with far less obfuscation. 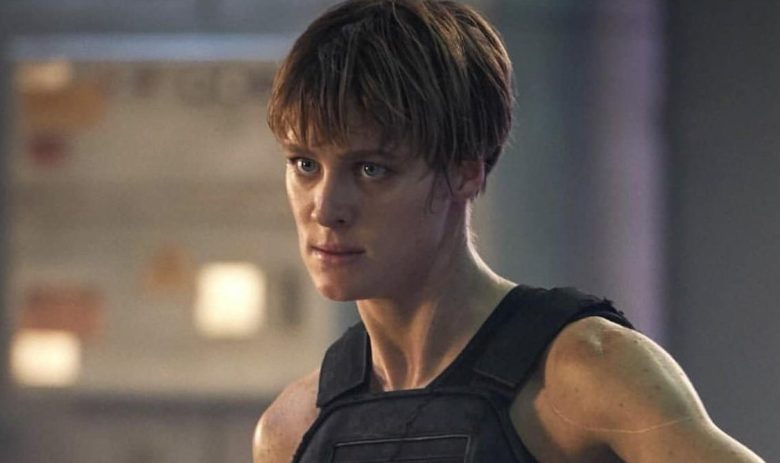 Poor Mackenzie Davis is left stuck in the Michael Biehn-type role from the first film. Her character, Grace, is a cybernetically enhanced human soldier designated as Dani’s protector (for reasons that become overly mawkish and sentimental, something this franchise has become mired with over the years) sent from the future, and to her credit Davis is pretty badass in the role. She goes toe-to-toe with Luna’s Rev-9 and holds her own more than I expected, even if the part doesn’t deliver the symbiotic relationship the Furlong-Schwarzenegger one had in T2 (I reference T2 a lot only because the film mirrors Cameron’s sequel to such a degree it’s impossible to overlook), resulting in her character feeling a bit out of place within the mythology of the franchise. Her backstory is intertwined with that of Dani Ramos’ in a way that makes timey-wimey sense, but the script sidles into laughable meta-reference silliness at the end undoing a lot of potential future involvement. Dark Fate was intended to kick-start a trilogy of sequels that would undoubtedly service more of Dani’s story, but due to the film’s lack of critical and commercial success that will likely not eventuate. Maybe it’s for the best: Dani Ramos isn’t as strong a character as we need to propel this franchise forward. 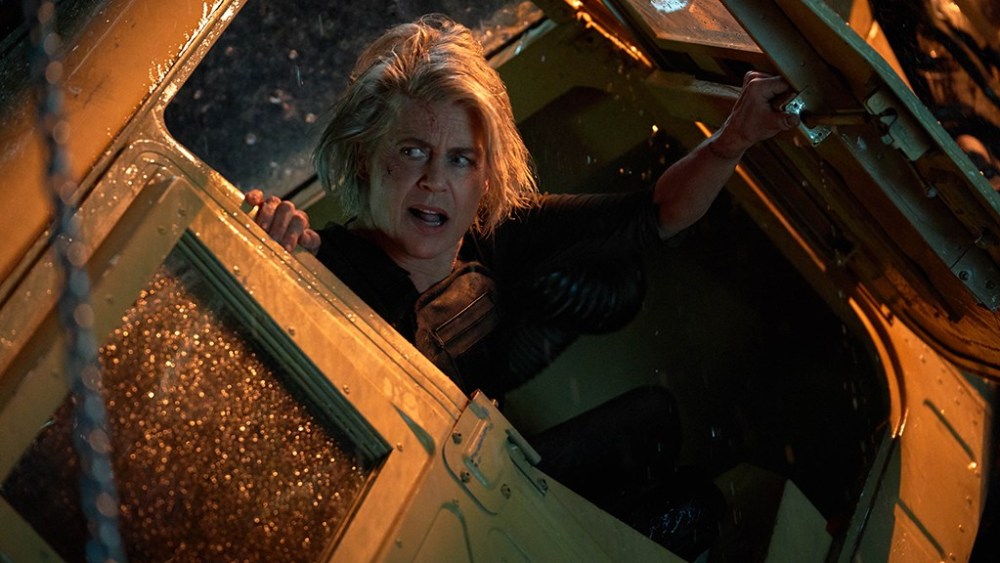 Of course, no Terminator film would be complete without the inclusion of Mr Schwarzenegger; reprising his role of a T800 (albeit a different one the that we saw melting into the furnace at the end of T2), he still knows this property and makes his elderly arc work – given the future he fought to protect no long exists, he continued to infiltrate humanity and became (among other things) a father figure and a drape salesman (!), in order to become a more effective member of society. It allows ageist jokes to be sprinkled into the film too, which are okay but hardly relevant. The film struggles to pick up the plot threads left over from T2 and the film’s brutal opening, and offers poor commentary on the theme of redundancy (for both the T800 and Sarah Connor, neither of whom are needed to protect humanity any longer) resulting in a subplot too stifling to allow the “newer” character work to thrive. The film spends a great deal of time balancing the old with the new, unfortunately doing a poor job of both. A sidebar: the digital work in the film’s opening sequence to de-age Hamilton and rejuvenate Edward Furlong is largely excellent, but the same scene with a “young” Schwarzenegger is eye-wateringly shoddy. They did a better job reconstructing a “young” Schwarzenegger T800 in Terminator Genisys, a film from 5 years earlier! 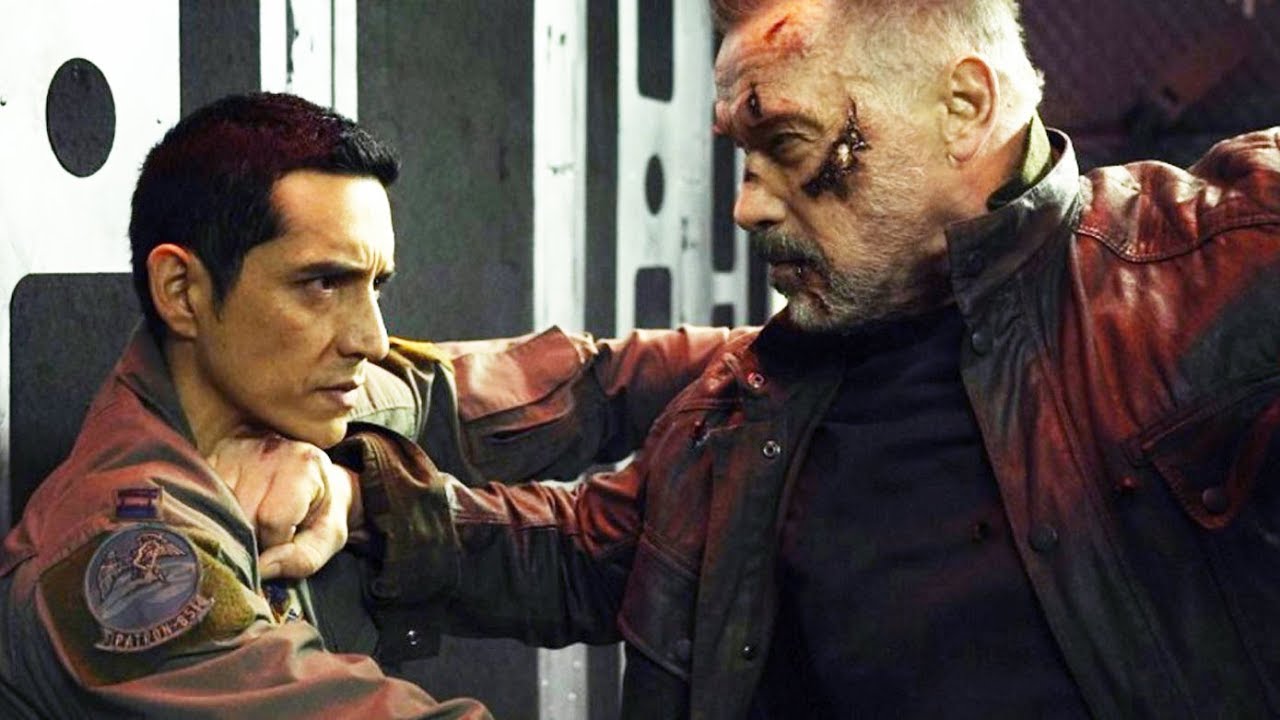 If you look at Dark Fate purely as an action film, Tim Miller’s work at a technical level is excellent. The frantic pace and level of destruction is on-par with previous films, the addition of technology and modern surveillance capabilities is again scary, and the film’s action editing is typically on-point for a film of such prominence (the editor here is Julian Clarke, previous projects including District 9 and Elysium, and more recently the Dwayne Johnson flick Skyscraper) with overblown explosions and physics-defying wreckage and death following the Rev-9 everywhere he goes. The film does a great job making the Rev-9 a malevolent force a la Robert Patrick’s iconic turn in T2, its just that it’s been done before so often the cliche is already worn out. Brad Fiedel’s memorable score and theme returns again, re-purposed by incoming composer Tom Holkenborg (otherwise known as Junkie XL and also the man behind the music for Mad Max: Fury Road) to great effect. If you disregard story and character, Dark Fate is a hugely competent and exciting action escapade. Sadly, the story and characters are impossible to overlook.

Terminator: Dark Fate is the kind of film you would summarise as “getting the band back together” with an inadequate motivation to do so. The franchise seems to be frustrated with the fact that James Cameron’s original two films so succinctly told the story of Sarah and John Connor, and concluded with such a resounding triumph of emotion and heart, that trying to “add on” to their story simply hasn’t worked since. Continually trying to mine further material from a concept so expertly conceived and concluded last century only dilutes that work further, and Dark Fate adds torment to tragedy by utterly obliterating the emotive conclusion of T2 simply for shock value that serves no genuine purpose. Second-guessing the filmmakers is risky, but had they maybe not brought back Hamilton and Schwarzenegger until the second or even third film of this proposed trilogy, letting the new characters stand or fail on their own terms first, things might have been more palatable to audiences. As it stands, Dark Fate reprises plot points and thematic material from Cameron’s originals, without standing out on its own. Maybe the Terminator franchise wrote itself into too many corners to allow new tangents and plots to be developed that cinema audiences would attach to: the fact that we keep wanting more of what Terminator 2 delivered, and are less interested in new characters, should finally prove to studios throwing money at this stuff that we don’t really want anything new when – like Sarah Connor herself – we’re too stuck in the past.