1992 was a pivotal year for me: it was the year I completed high-school, and it was also the same year Terminator 2 unleashed itself upon cinema audiences across the globe. Seismic shift in life, coupled with a visible tectonic upheaval in action cinema; 1992 was a year I look back on and remember fondly for more than a few reasons. Terminator 2’s echo resonates with this sequel, a franchise soft-reboot subtitled Genisys that sees action stalwart Arnold Schwarzenegger return to the series that made him a superstar. Although the faces in front of, and behind, the camera have changed, some with more wear and tear than others, the same basic melancholy sci-fi thrills with which James Cameron graced us before Y2K, now clamor for recognition in an action-saturated market, looking to distinguish itself with multiple callbacks but a new, divisive, crucially required change of direction for a saga that, with Salvation, looked like it needed to be unplugged.

It is the end of the war against the machines; Skynet, the sentient computer system, uses Terminator machines to track and kill all living humans. A resistance, led by John Connor (Jason Clarke) and Kyle Reese (Jai Courtney) oversee the final battle that brings Skynet down, only to discover the AI has sent a lone terminator (Arnold Schwarzenegger) back in time to change the past. Using the same machine, the Resistance sends Reese back to 1984 as well, to locate and protect Sarah Connor (Emilia Clarke), only when he arrives, not everything is as he remembers, or as it’s supposed to be. More than one Terminator exists back in 1984 – both an older version of the T800, a new T1000 – and the future, a future Reese thought written in stone, now has the possibility of being rewritten.

Terminator Genisys is one of those films that looks awesome on paper, and unravels quickly when put onto film. It’s a film boasting many callbacks to the previous films – mainly the original and T2 – and seems to disregard Terminator Salvation altogether, and for the most part I enjoyed them for what they are, although in the cold light of day it’s a bit of a risk spending a large portion of a new sequel dwelling so much in the past. Not only does it alter significantly what we thought we knew about the franchise’s internal chronology, Genisys tries to break new ground for the future (which is smart, I guess), with more or less a successful foray into time-bending, brainy-hurty sci-fi silliness that, and I’ll be honest, works more than it doesn’t. That’s not to say Genisys is particularly clever (leastways, no more than it seems to think it is) or a new benchmark in the franchise, but as a thoroughly enjoyable piece of retrograde pop-culture reminiscence, it more than ably acquits itself of the task. 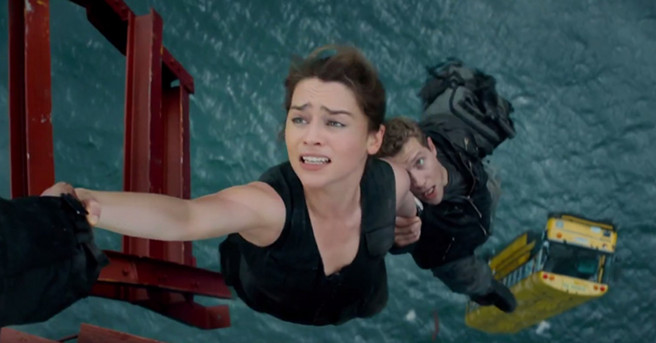 Genisys is smart enough to recognize its own limitations, or at the very least the limitations of its premise; the Terminator franchise’s long history of time-travel plot holes (chasms, really) isn’t solved here either, so make no mistake – Genisys is just as twisty loopy crazy with its past/present/future narrative contortions, and probably causes more headaches for franchise aficionados as it delivers excitement. Although it taps into the franchise’s past with just enough nod-nod-wink humor, the script’s alternative universe premise automatically takes the saga into an entirely new direction; naturally, possible alternate universes make for many possible sequel opportunities as well. Oh, a note: stick through the credits for a mid-sequence stinger….

The film definitely feels like a Terminator film, in as much as Taylor captures the visual aesthetic of Cameron’s established world (moreso than Jonathan Mostow’s Terminator 3, or Salvation) and while Michael Biehn and Linda Hamilton have been replaced by younger, hotter (!) versions in Jai Courtney and Emilia Clarke, and John Connor is now played by Jason Clarke (and some severe facial wounds), Genisys is largely its own film by virtue of an early plot twist that staggers belief. Both Emilia Clarke and Courtney do a nice job with their roles, although they’re a shadow of the originators of these characters – Emilia in particular lacks a raw edginess that came with Linda Hamilton’s muscular performance – while Jai Courtney’s hardly a Biehn in a fairly stiff, generic “action star” performance that accomplishes what’s required but never transcends it. With that in mind, it’s time for the fun.

Genisys does some pretty clever things: the opening act’s appearance of a T-1000 is given a similar look to the Robert Patrick version in T2, the early-90’s liquid metal that looks exactly the same (a terrific visual motif that places us right into the era), and it also does a handy job of bringing back 1985 Arnold Schwarzenegger, with an original-film callback to the first film’s early scenes of the Terminator arriving from the future. Recurring visual elements of the franchise litter this film, and aside from rooting the story firmly within its own universe, does a great job selling the technology abyss between time-frames the film skips across. I’ve heard fanboys decry the use of Arnie’s “old” Terminator, notated as Pops within the script, as being merely a shadow of the man’s former self, but I enjoyed the Austrian Oak’s self-referential jokes about aging, as well as the dynamic between the trio. Of note, a minor role to Academy Award winner JK Simmons as a policeman aiding Sarah and Kyle, who is pretty much wasted but does a great job anyway. 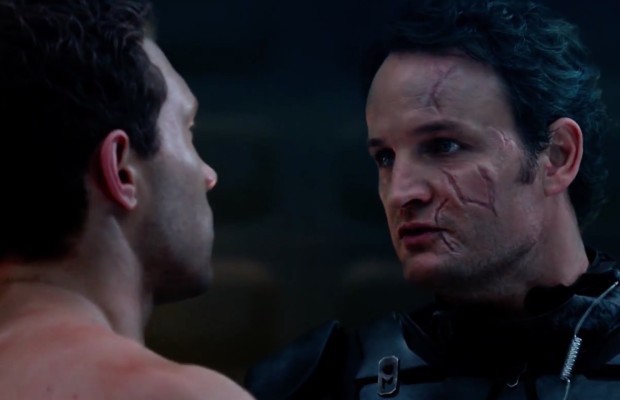 Jason Clarke’s character of John Connor is more important to this film than even in previous installments, although the way the character is handled (as I alluded to with the crazy plot twist) feels manufactured just to keep him into the story, and emotionally it feels forced. I never quite bought into John’s sudden transition into the franchise’s Bad Guy (although seeing former Doctor Who star Matt Smith (credited as “Matthew Smith”) cameo as a Terminator-slash-hologram was a minor pleasure!) and the motivations for it again feel manufactured rather than with any organic osmosis.

Alan Taylor gives the broad-scale action and destruction, which has become a hallmark of the franchise, a real sense of weight, rather than the cartoony joke stuff of Rise Of The Machines. The menace within the various Terminator units depicted in the film is given credence by a focus on integration with real-world physics, a fact I was most pleased to witness, and whenever the carnage found its way into the public arena (such as a mighty school-bus sequence on the Golden Gate Bridge) the film lifts with intensity. As with Cameron’s films, Taylor doesn’t dwell on the aftermath or consequences of the destruction wrought by the conflicting Terminators in “our” time, with shrapnel and effluvial detritus given no screen-time whatsoever when the focus remains on the immediate plight of the central characters. Using every cinematic weapon in his arsenal, and probably utilizing the world-ending skills he gleaned on the Thor sequel, Taylor delivers a concussive, stylish, albeit draped in darkness adventure into sci-fi apocalypse. Kudos to him for making this head-trip work as well as it does. 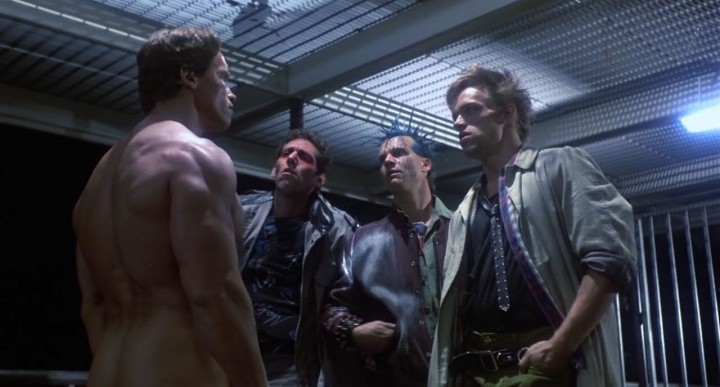 The film’s technical aspects are also on-point. The score, by Lorne Balfe (a Hans Zimmer underling better known for his work on computer game music) harkens back to Brad Fiedel’s electronica themes, re-purposing them for this movie with a sense of style and restraint. The film has a definite “orchestral” flavor to it that I always enjoy – too many sci-fi films these days have an overuse of music manufactured inside a computer – and the thunderous tones of brass and percussion within Balfe’s work is a welcome throwback to action cinema of old. The cinematography, by regular Alan Taylor contributor Kramer Morgenthau, is beautiful: a drab, striking grey overtone of dusky monochrome, a far cry from Cameron’s evocative blue, or Mostow’s technicolor yawn. The melding of physical and computer effects is seamless, and the CG is undeniably effective (I refer again to the liquid metal effect used on the T2-era Terminators) but having said that, it’s no game-changer in the way Cameron’s sequel was.

As much as I guess I could complain about some of the plot holes and leaps of logic involved in Genisys, at least it tried to accomplish something McG’s Salvation could not – it gives us a sequel that works within the parameters of the original two films, and somehow gives us more options for future sequels to come, something I felt the last two films in the series did not. If Rise of The Machines was a poor second-cousin, and Salvation was an aberration, then Genisys represents a franchise course correction. It’s furiously plotted, with don’t-think-about-it character arcs and logic skips that lack punch at times, but the overall concoction works well and gives us a pleasing, rousing sequel that entertains in spite of concerning confusion.