It might sound condescending to say, but Noah Buambach’s Marriage Story is the kind of film Woody Allen might have directed had he not been so full of his own ego. Told evenly through the perspectives of a young couple going through a marriage bust-up, Baumbach’s graceful, scathing, excoriating examination of relationship fatigue makes for uncomfortable yet must-see viewing. It’s also an entirely apolitical film; at no point does the film “pick a side” in this fight, instead allowing the flaws and faults of its key protagonists to simply be without casting aspersions on either, and this in itself is refreshing. It’s also astonishingly well acted, with natural performances of heartbreaking honesty being drawn out of both Scarlett Johansson and Adam Driver, both of whom were nominated for Oscars for their work here, a plaudit rightly bestowed, for both are formidable in their respective roles. 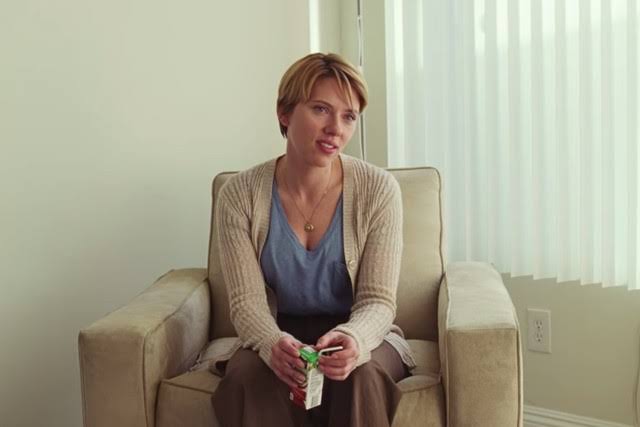 New York residents Nicole (Johansson) and Charlie Barber (Driver) are going through a marriage breakup. She is a popular actress at his New York theatre group, and he is regarded as a rising star in the city’s theatre scene. Their marriage breakdown leads Nicole to take their young son, Henry (Azhy Robertson) back to LA, where her mother (Julie Hagerty) and sister (Merrit Weaver)  reside, to take up a role on a pilot for a Hollywood television series. Whilst there, she contemplates her future and instigates divorce proceedings, taking the services of renowned family lawyer Nora Fanshaw (Laura Dern, also nominated for an Oscar here), whilst a bewildered and confused Charlie must respond with a lawyer of his own, Bert Spitz (Alan Alda). However, when the divorce starts to turn nasty, Charlie ups his game and upgrades legal counsel to the more expensive and successful Jay Marotta (Ray Liotta); throughout all of this is the welfare of Henry, something Nicole and Charlie want to keep out of any of the nastiness. 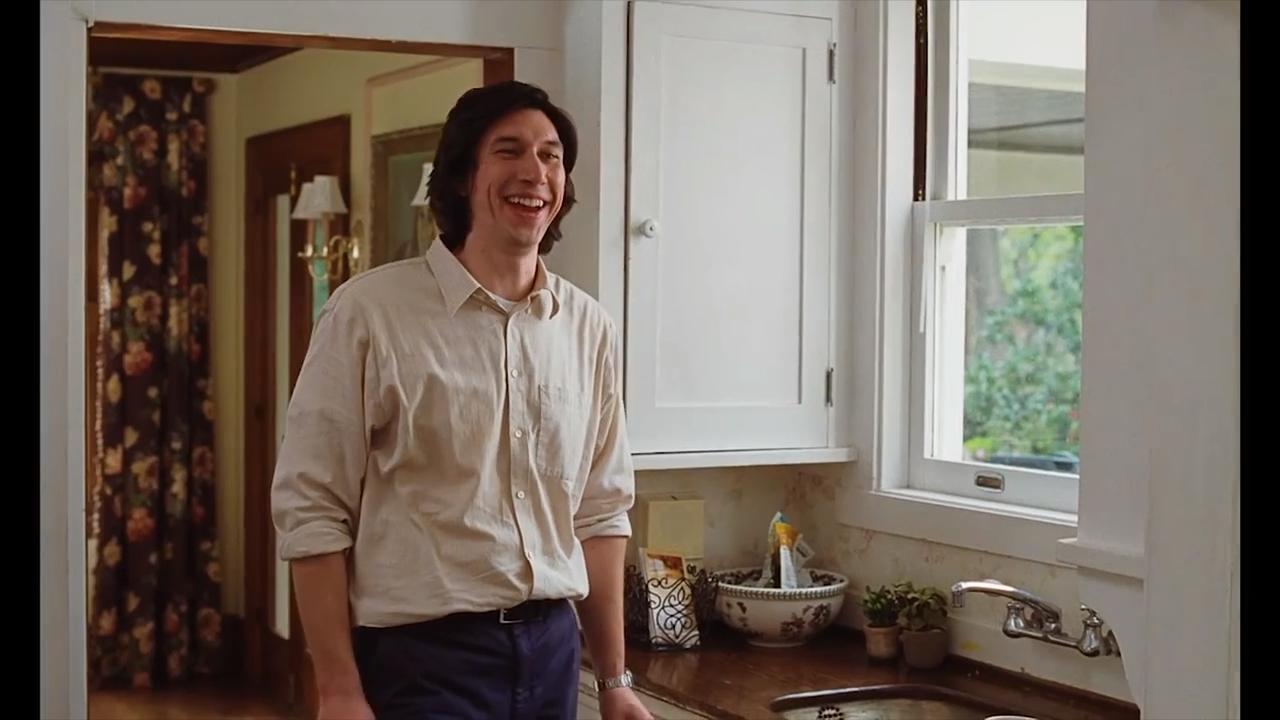 Being married isn’t always fun. Quite often it’s a lot of hard work, maintaining the interest, the spark, the fun. Sadly, more often than not these days, marriages fail and couples, for whatever reason, split apart (unless you’re Gwyneth Paltrow, in which the phrase “consciously uncouple” comes in…), often with long term emotional consequences. Compounding the tragedy of two people falling out of love is often the inclusion of children into the mix, an added layer of divisive emotional bitterness that’s almost never resolved amicably and almost always results in increased animosity between the adults involved. Then there’s the extended family of a long-term relationship, who have no control or say over the breakup of the relationship, most of whom have to by default choose the side of their blood relative, despite perhaps feeling the exact opposite. Human relationships are a complex thing, and watching a film like Marriage Story, which dives deep into this complexity with a sense of intimacy and melancholy inevitability, you start to think that there’s a very good reason why our society is doomed to eventual failure. Humans, by and large, are flawed. 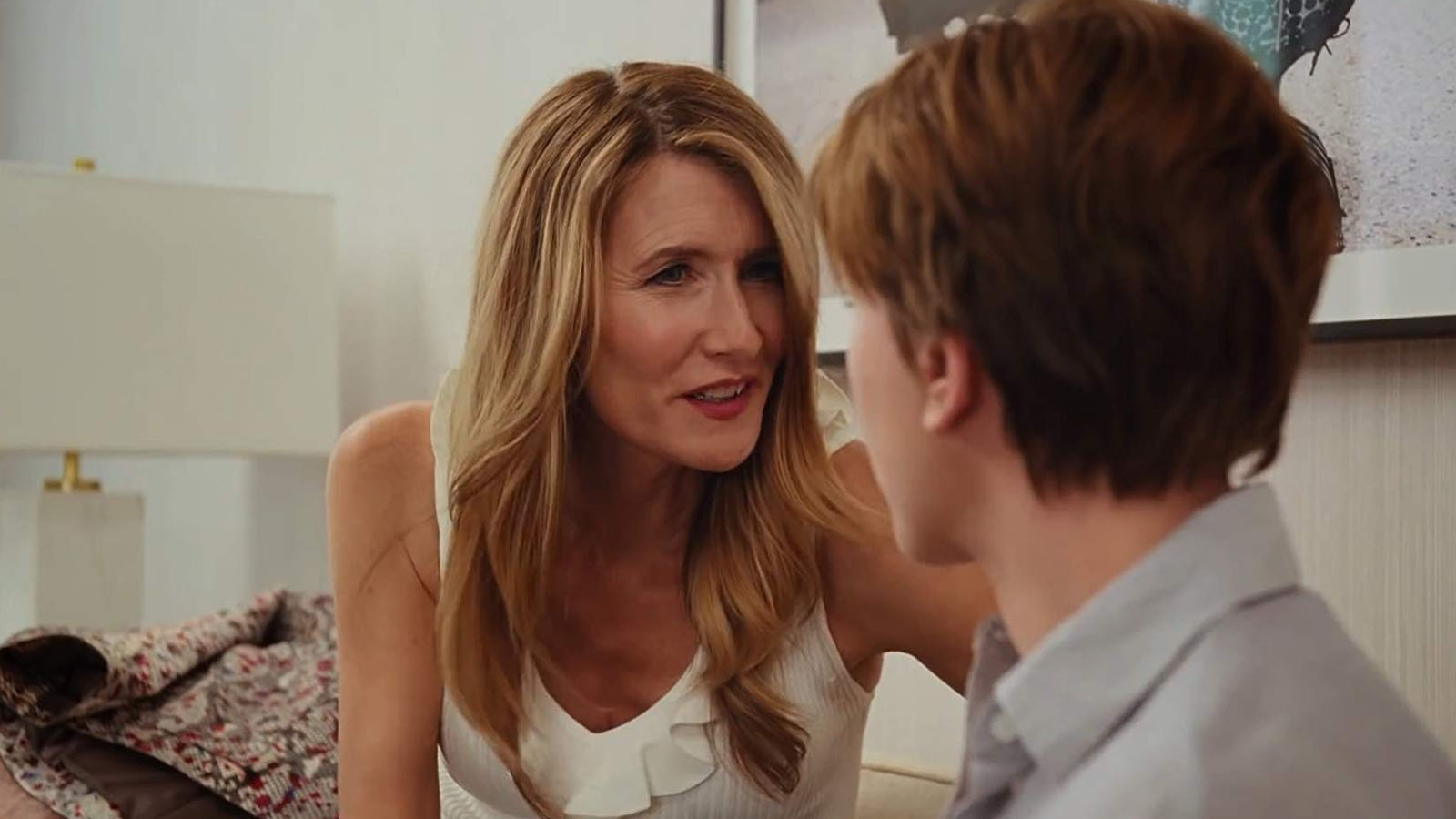 Baumbach gathers these flaws with his gut-wrenching acuity in Marriage Story, having written the script after his own divorce from actress Jennifer Jason Leigh (The Hateful 8). The script, and indeed the resulting film, is the truth: breaking up is hard to do, and often one of the most painful things two people can go through. It’s certainly not something you wish might happen when embarking on a relationship at first. As mentioned, the film doesn’t choose who’s right or wrong here, it simply presents both Nicole and Charlie as two people with different wants and needs unable to find a common ground. Nicole feels as though her time in New York, acting on stage and having to turn down a career on screen, was wasted and unfulfilling, whilst Charlie has become self-involved and focused on himself – the fact he had a sexual liaison with one of his company’s stage managers  notwithstanding. Charlie feels Nicole is being unreasonable in taking Henry across the country to live, making it difficult for him to spend time with the boy while “selfishly” pursuing her dreams. If you’ve ever spoken to somebody mid-breakup there’s a lot of he said, she said to wade through and Marriage Story delivers this kind of thing with an even-handedness that’s refreshing to bear witness to. Often, these kinds of films depict one of the parties as deceitful or deserving of heartbreak, which gives the audience a singular focus to latch on to. Here, we’re actually hoping both Nicole and Charlie get back together or at the very least find a way to reconcile their feelings without too much emotional pillaging. 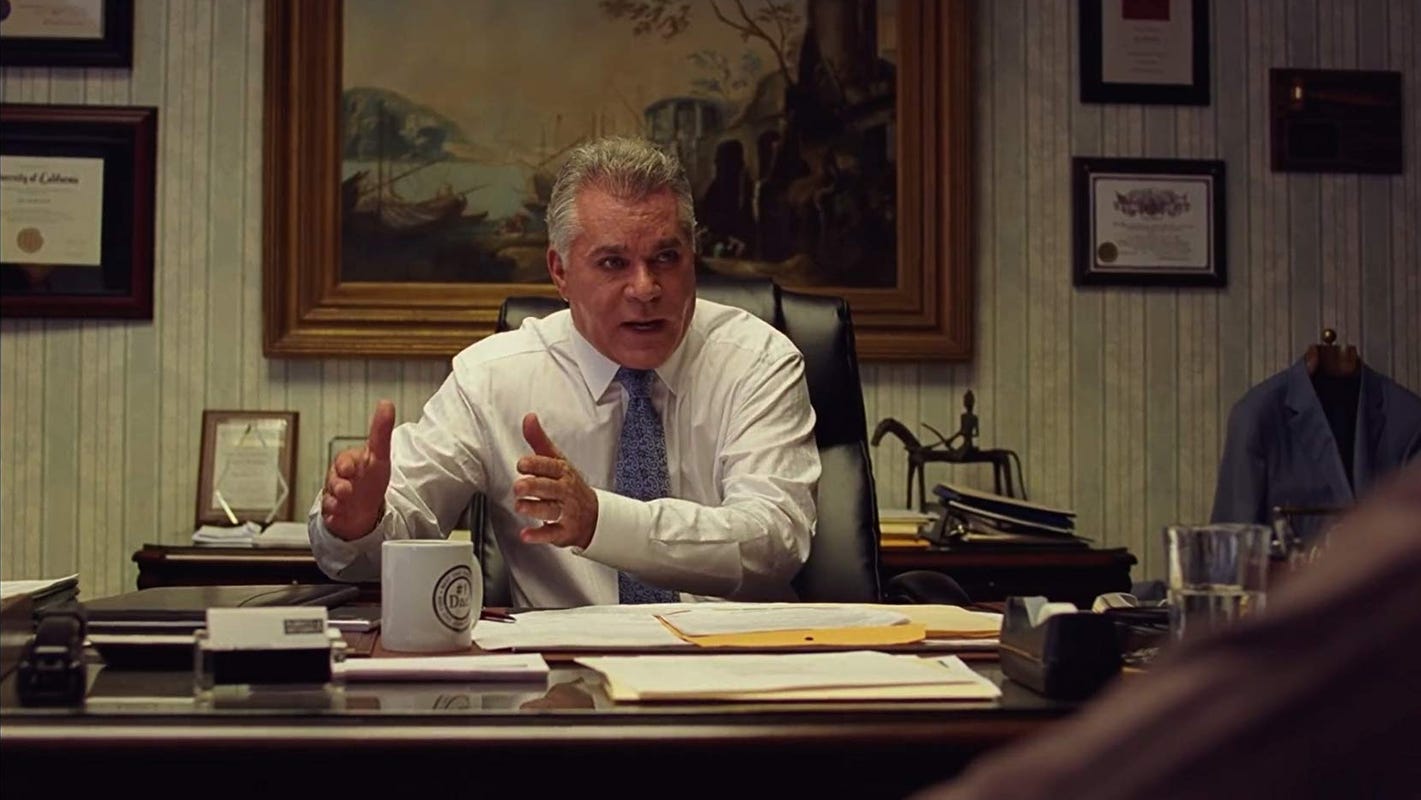 But, as with any good character drama, conflict breeds all manner of heightened emotion, and the inevitable, unenviable confrontation between two people so angry with each other is delivered with such ferocity and restrained truth you feel like you’re part of the family. It’s a devastating movie, fraught with anger and resentment and all kinds of accurate interactive emotional conflicts, with Johansson and Driver’s brilliant performances devastating you throughout. The bickering, the sniping, the “lawyering up” fracas and courtroom scabrousness of their tattered union represents modern relationship angst, and Baumbach approaches it with considerable ambivalence. His camera lingers, aching for either sense and reason to prevail or maybe to capture some cathartic moment of realisation, and he creates a wonderful subtle tension against which this tragic story takes place. Scarlett Johansson proves she’s an exquisite dramatic actress with this film, a far cry from the superhero and action antics the majority of her career has been built on. She inhabits the role with class, giving Nicole a purposeful sense of escaping freedom and strong-willed resilience. Adam Driver delivers his best performance to-date as Charlie, who goes from nonplussed to confused to somewhat emasculated throughout, before his blistering rebuke of Nicole’s actions in the film’s climactic dramatic “moment”. There’s a rawness to both of them in the film, a human truth they represent, and it’s honestly astounding how well they represent their characters without becoming over-acted. 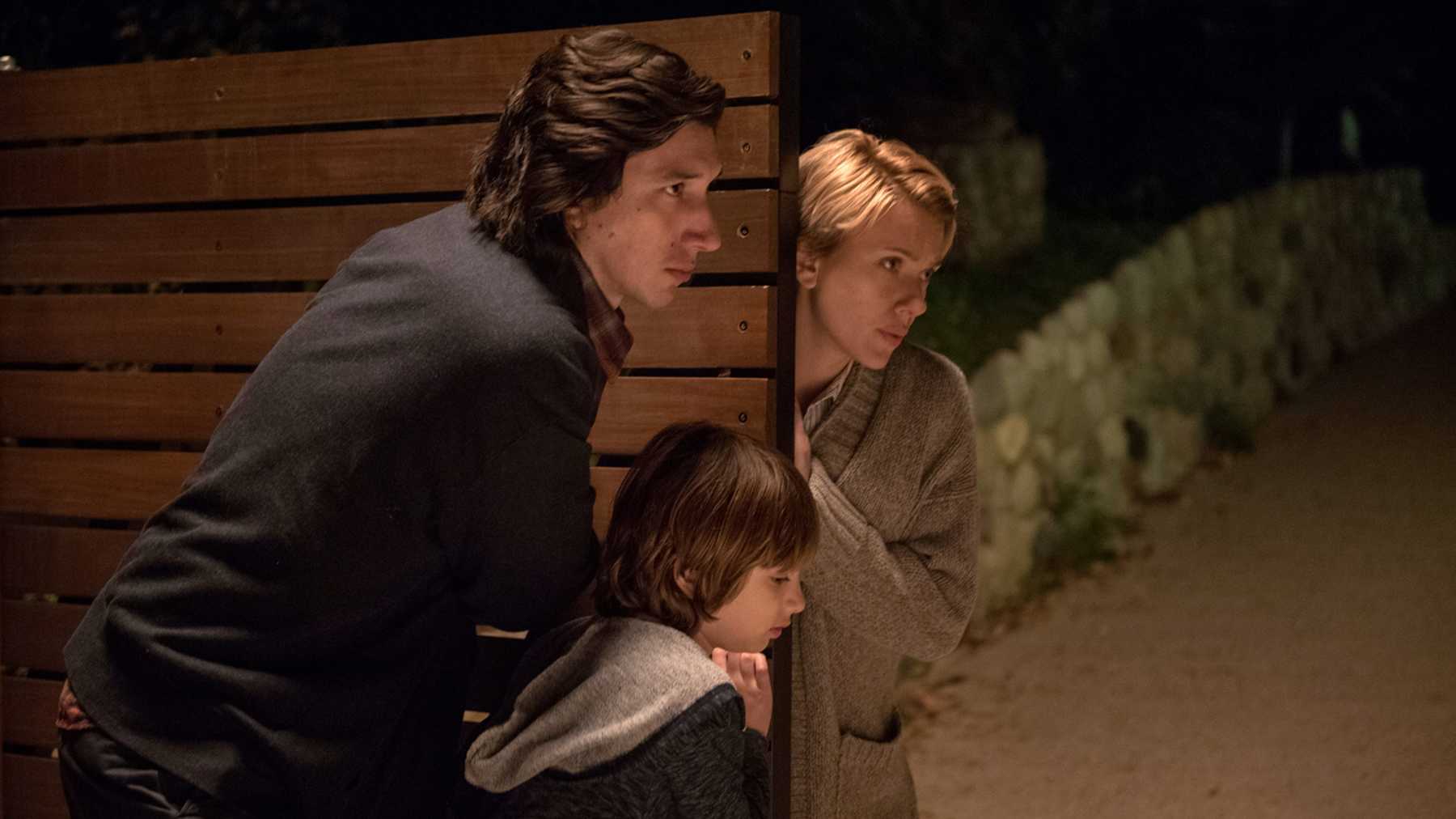 The supporting cast is also excellent, led by Laura Dern as Nicole’s go-get’em lawyer Nora. Dern is terrific indeed, contrasted by Alan Alda’s restrained and stately turn as an ageing family law barrister who seems more resigned to human tragedy than he really wants. They represent both sides of the family separation debate, whilst a minor turn by Ray Liotta, as the angry, embittered and calcified pitbull Jay Marotta will have many people squirming in their seat. Julie Hagerty plays Nicole’s former-TV-star mother with a bizarre whimsy, and Merrit Wever, as Nicole’s sister, is a pleasure to watch. A bit-part by Wallace Shawn, as a egocentric performer with Charlie’s theatre company, is a hoot. Come to mention it, the film isn’t entirely maudlin, offering some biting black comedy and social satire in brief, pull-back-the-curtain moments of even more brutal honesty. But: it’s a wry, ironic humour, derived from situational distress, rather than outlandish Seinfeld-observational material. If you can’t cry, laugh I guess.

Marriage Story is a brilliant story of two unimportant people going through the darkest period of their lives, and Baumabch’s insightful dialogue and articulately rendered humanist tableau form a canvas that enriches and embraces those who seek its pleasures. Oh, make no mistake: Marriage Story’s plot isn’t a fun ride, and the film will absolutely break your heart from the very start, but it’s an enormous pleasure to watch a true cinematic artisan and two effortlessly beautiful performances deliver one of the best films about relationships ever made. There are no caveats with this one: Marriage Story is an exquisite, must-watch work of art.