Finally, that reference in Four Weddings And A Funeral makes sense. A studio-bound film adaptation of the acclaimed Broadway musical features a terrific chemistry between its two romantic leads, Gene Kelly and Cyd Charisse, but time and sentimental anachronism hasn’t been kind to this luxuriously filmed, yet altogether inert musical production. Brigadoon is arguably the most inauthentic Scottish representation I’ve seen on screen in a long, long time; set in the highlands of that Northern UK country, Brigadoon features a load of mangled accents and a regionally derelict depiction of the society upon which it is based, a mish-mash of what Scotland is really like and what Americans think Scotland is really like. Ameriscots, if you will. 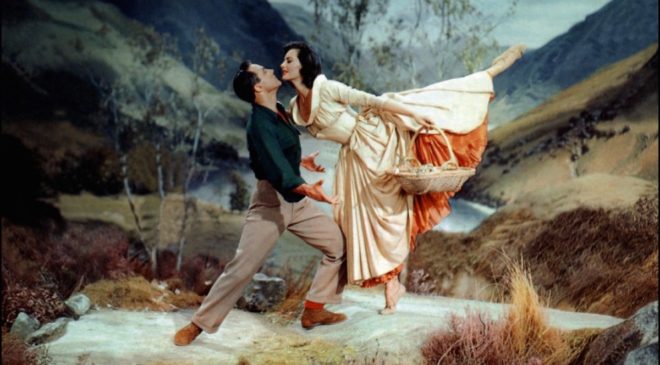 Two American tourists to Scotland, Tommy Albright (Kelly) and Jeff Douglas (Van Johnson) stumble upon a quaint little village appearing from out of the fog, only to learn that the townsfolk appear resolutely stuck in a different time – the past. Falling for local girl Fiona (Charisse), Tommy discovers that the town, Brigadoon, is cursed (or blessed) to vanish for a hundred years, appearing only once in the intervening time, although for those living in the town that century gap is nought but an overnight kip. With the town soon due to vanish again, Tommy and Fiona’s brief but incendiary attraction brings with it the traditional tussle over whether love can truly conquer all; will Tommy stay with Fiona in Brigadoon and wake each morning to discover that a hundred years have passed, or will he return to the hurly-burly of his Manhattan-based life? 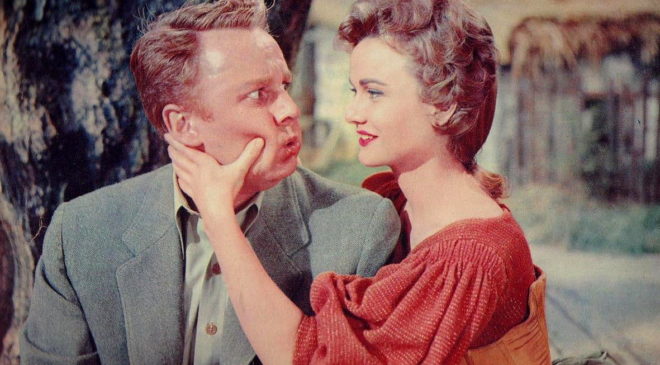 Brigadoon may have been a popular stage musical, and continues to be a crowd-drawing stage show, but in its 1950’s film version there’s a distinct lack of… well, something tangible inside Vincente Minnelli’s sprawling widescreen production. Emotionally inert, pleasantly vacant and showcasing some very iffy Scottish painted backdrops within the soundstages of the MGM lot, Brigadoon’s lustre has largely faded despite the hopeful work of Gene Kelly, who rises above what turns into a plodding, pseudo-operatic romance yarn. The film features at least one popular-culture musical hit, “It’s Almost Like Being in Love”, and a number of workable ensemble showcases that will have the feet twitching to join in, while Kelly’s numerous dance routines (with a variety of partners) once more prove that the man can literally float on air, but I really did struggle to enjoy the film for what it was, and tried so hard to be.

Written for the screen by Alan J Lerner, from his own stage script, Brigadoon is at its heart a romance, and aspires to be a romance for the ages with its magical accursed-town conceit, but adroitly sidebars this problematic scenario for saccharine doe-eyes and permutations of preposterous pontificating that wearies as much as it welcomes. The central trio – Tommy, Jeff and Fiona – make for intriguing yet bland caricatures (Jeff especially, try as Van Johnson might to do otherwise, suffers the indignity of being a very out-of-tune comedy relief) and the harsh studio production values turn the bucolic Scottish setting into a Mary Poppins-esque nightmare of indifferent vistas and never-quite-believable set design. Brigadoon doesn’t trade on the falsity of belief suspension, like say Moulin Rouge did, instead relying on a gaggle of supporting characters sporting tartan – man, there’s a lot of tartan in this – and the ubiquitous bagpipe screeching to give us the idea that the film occurs in Scotland. The fact that the studio went for the cheaper soundstage option, rather than actually filming in Scotland, hobbles Minelli’s vision for the film. 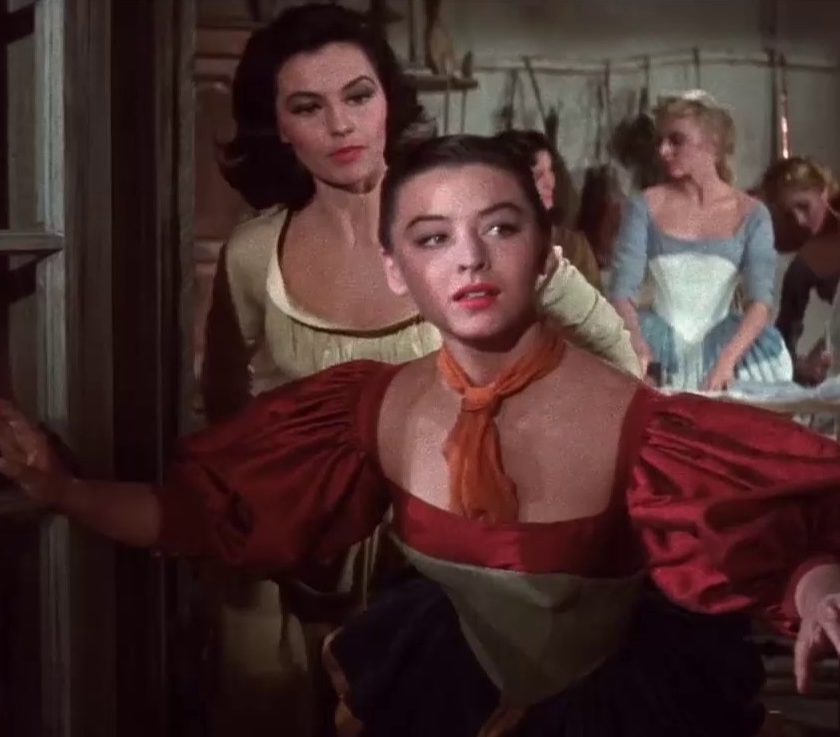 The tale’s central villain, a disgruntled young lad named Harry Beaton (Hugh Laing), threatens to leave Brigadoon after the love of his life, Jean (Virginia Bolster) is about to marry another man, Charlie (Jimmy Thompson), the threat magnified by a secondary part of the most convenient curse – if anyone who lives in Brigadoon leaves, then the village disappears forever, never to return. One realises upon learning this fact that at some point tragedy must strike – Harry is set to leave, but is accidentally killed by one of the leads, resulting in a tortured climax that overburdens a largely simplistic storyline with far darker undertones than its wobbly premise can adequately explore to deliver. When the film focuses on Tommy and Fiona, a betwixt-and-between romance that has chests heaving and people swooning, Brigadoon works well enough, but whenever Minnelli strays too far from this and spends any time with the rest of the ensemble, the movie unlatches from competency and flies off like an ill-aimed caber.

In terms of performances, Gene Kelly more than holds his own; he’s a star, and he knows it, and the camera knows it. Cyd Charisse is also an absolute legend, although her role is far too limited to disingenuous eye fluttering and forehead slapping moments of cliched romantic claptrap. As a dancer, however, Charisse nails the routines alongside Kelly, much like she did with Fred Astaire a year earlier in Minelli’s The Band Wagon. Van Johnson’s loud, uncouth and insultory work as Jeff is as brash and crass as the character demands, but the film never gives us a more human side to the part – save for a momentary glimpse towards the end – and that’s a shame. Johnson’s performance almost overpowers the more genteel aspects of Brigadoon, being memorable for probably all the worst reasons. Barry Jones, as this film’s Basil Exposition, is left with the unenviable task of explaining the entire plot of the film to the audience in a lengthy and boring scene towards the end, while Hugh Laing, as Harry Beaton, and Elaine Stewart as Jane, give worthwhile work to what is largely excruciating subplot of unrequited love. 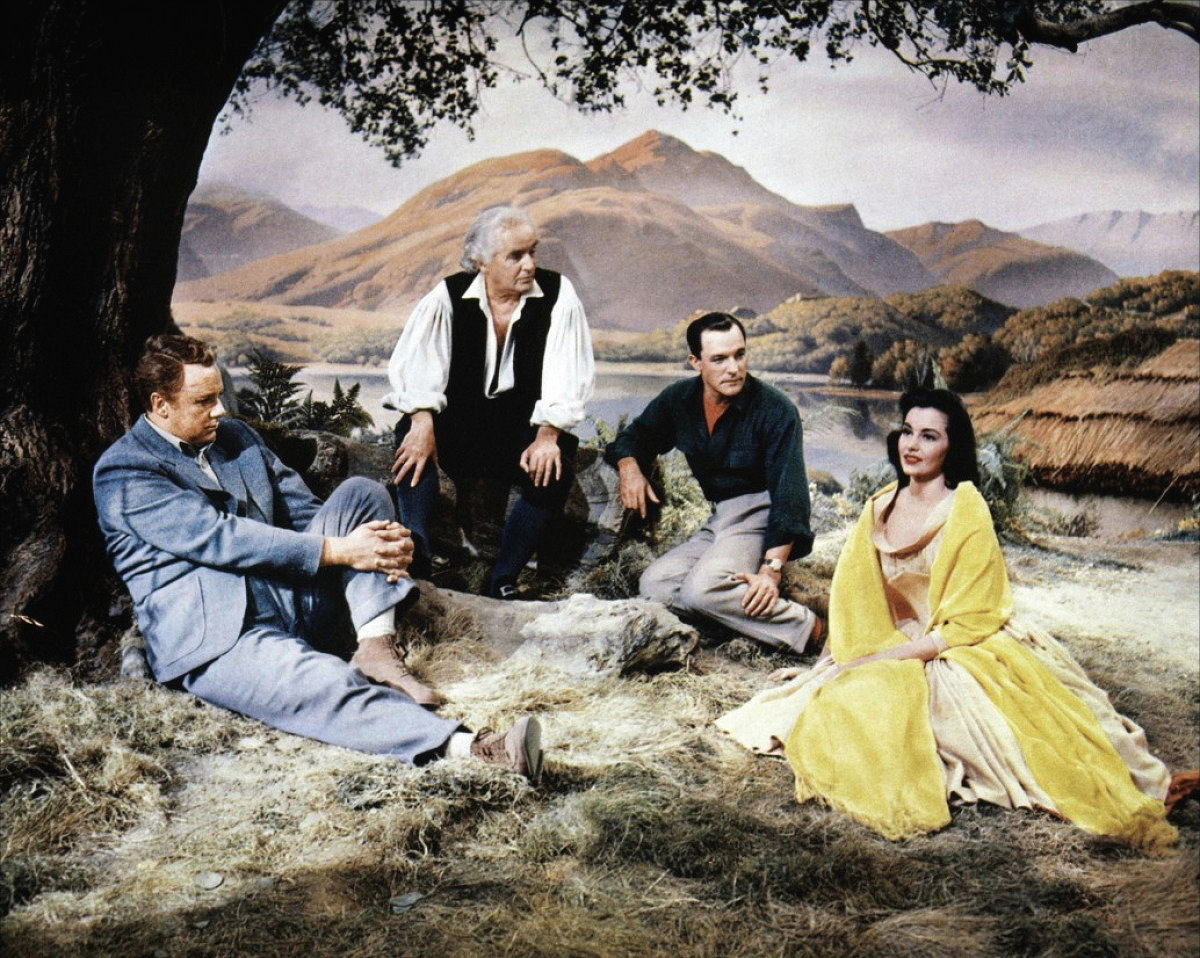 Brigadoon isn’t a bad film at all. It’s not good either, just merely very average. It’s a film beset with all manner of issues, both story-wise and technical; the characters don’t feel legitimised by the actors performing them, try as they might, and the clunky nature of the screenplay and Minnelli’s unfortunately studio-mandated reduction of filming entirely on soundstages rather than in actual Scotland (cost, it seems, was the albatross for MGM’s desire to film on the backlot) make this a plodding, often laughably insensitive replication of what might have been a remarkably splendid cinematic event. The representation of Scotland itself, from hokey painted backdrops to an insufferably mangled attempt at the dialect by several of the non-British cast faking it wholeheartedly, is by today’s standards dire, and almost unpalatable even as evidentiary historical cinema. I’d recommend it for Gene Kelly fans and musical purists, but casual viewers will find themselves switching off well before the obligatory climactic chase sequence.