Few films are treated with as much reverence as that accorded to Frank Capra’s seminal holiday season favourite, It’s A Wonderful Life. It’s become the default fallback film for the Christmas period (despite the film having only a most minor seasonal influence within it) among those living inside the United States – outside America, however, the film isn’t perhaps the nostalgic sentimental work Hollywood seems intent on claiming so breathlessly – and one can see why: it’s a Capra film, therefore touching on all things Capital-A American, it’s faultlessly directed, arguably supremely acted by everyone (even the children) but especially by a wonderful Jimmy Stewart, and contains innumerable heroic moments of struggle and honour that personify everything American’s love to hold dear as a measure of their self-worth. In short; It’s A Wonderful Life is a wonderful film, whether you’re an American or not, and a testament to both Capra’s operatic ability to charm the hell out of his audience and Jimmy Stewart’s towering charisma as an actor. 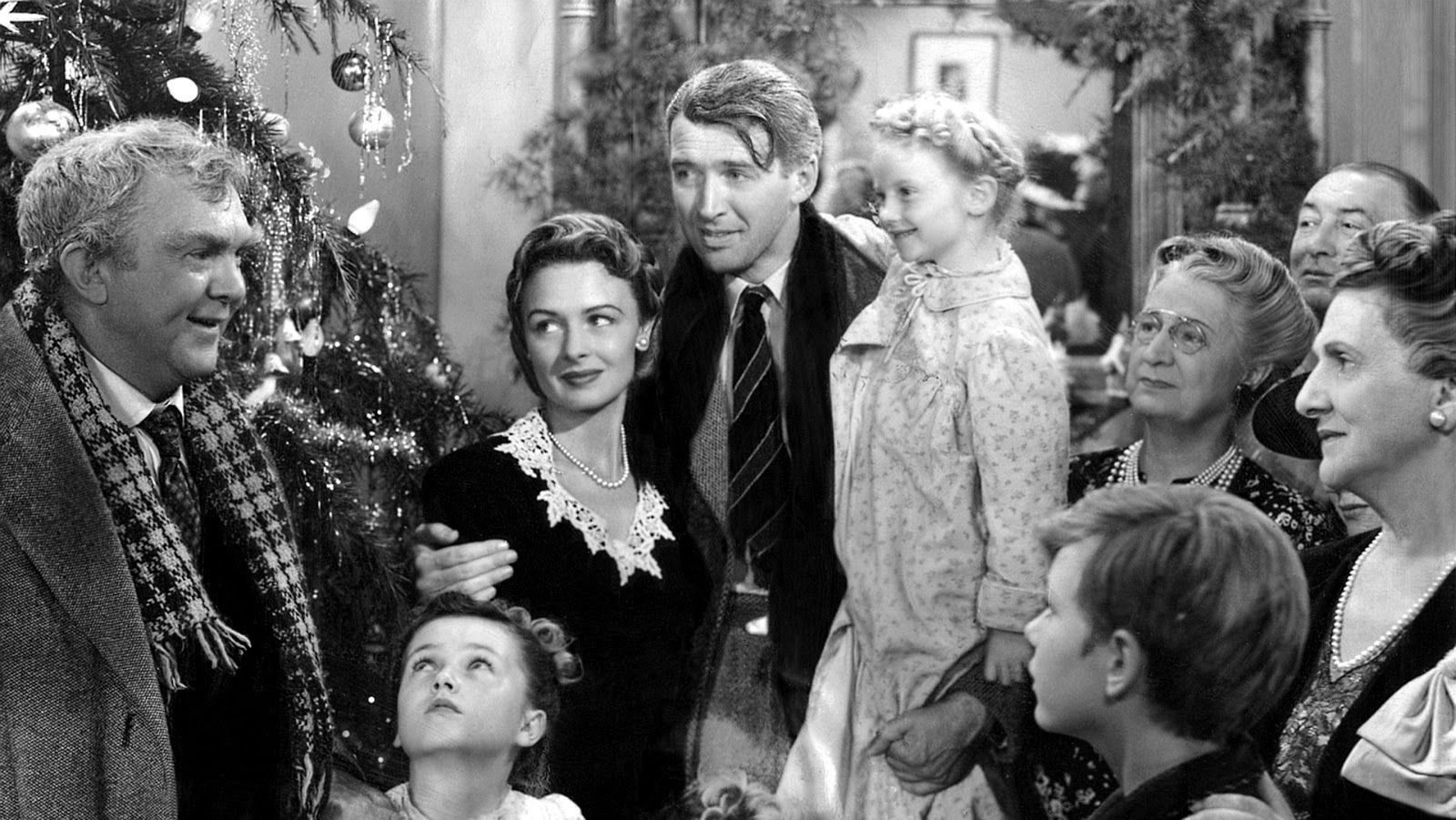 Set in the small town of Bedford Falls, New York, Angel 2nd Class Clarence Odbody (Henry Travers) is sent to Earth to “earn his wings”, by attempting to prevent local man George Baily (Stewart) from committing suicide one Christmas Eve. Baily, as we soon learn from a protracted flashback, has lived in Bedford Falls his entire life, yearning to travel the world but, through fate and circumstance, remaining yoked to the town through the family business of a small-time savings and loan company, in competition with the town’s miserly Scrooge, Mr Henry Potter (Lionel Barrymore), who owns the town’s main bank and consequently almost everything else. After the death of his father, George takes over the business and remains honourably indebted to the community he serves, although he himself cannot see it, even eventually marrying long-time love Mary Hatch (Donna Reed) and settling down in an old run-down house and having a breed of children. When his business is overwhelmed during the stress of the depression, and angry at his family and friends seemingly having blessed or charmed lives- including his brother, Harry (Todd Karns), who becomes a war hero and acclaimed across the land – George finds his life at a crossroads, and contemplates ending his life so Mary can claim the life insurance. It’s then that Clarence arrives to show George exactly what life would have been like if he hadn’t been born. 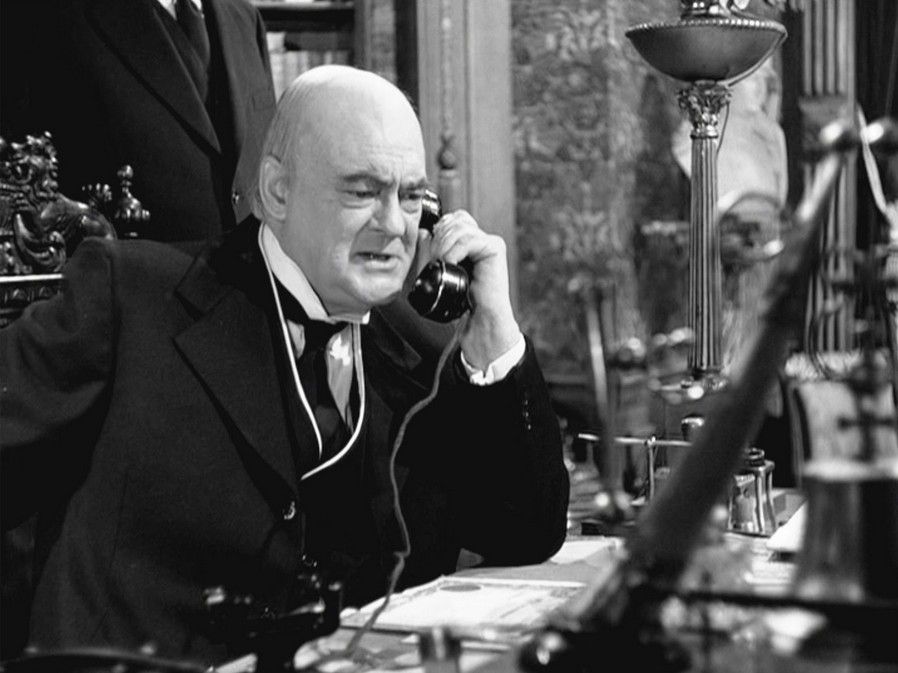 As well as closing a rather large gap in my cinematic vocabulary, finally watching It’s A Wonderful Life also cements several opinions in my head about just what kind of actor Jimmy Stewart was. To wit; he’s absolutely fantastic here, assuredly worthy of his Best Actor Oscar nomination (he was beaten by Frederic March in The Best Years Of Our Lives) and as engaging and moving a character arc as any put on the screen before or since. The character of George Baily epitomises small town Americana in almost every facet; he’s a man of decency, honour and moral uprightedness (similar to Stewart’s other role in Mr Smith Goes To Washington) and personifies the American ideal, that of hard work, truth and justice winning out over evil and hate – personified by Lionel Barrymore’s cruel and sadistic Henry Potter, the film’s own Biff Tannen, if you require a modernised reference – and together with his work ethic and selfless identity, as well as his idealised romance with Donna Reed’s fabulous Mary Hatch, remains among the actor’s most iconic role and performance. For those who ever claim that “old” films lack the sweaty realism of today’s modern dramas, show them It’s A Wonderful Life by way of argument. 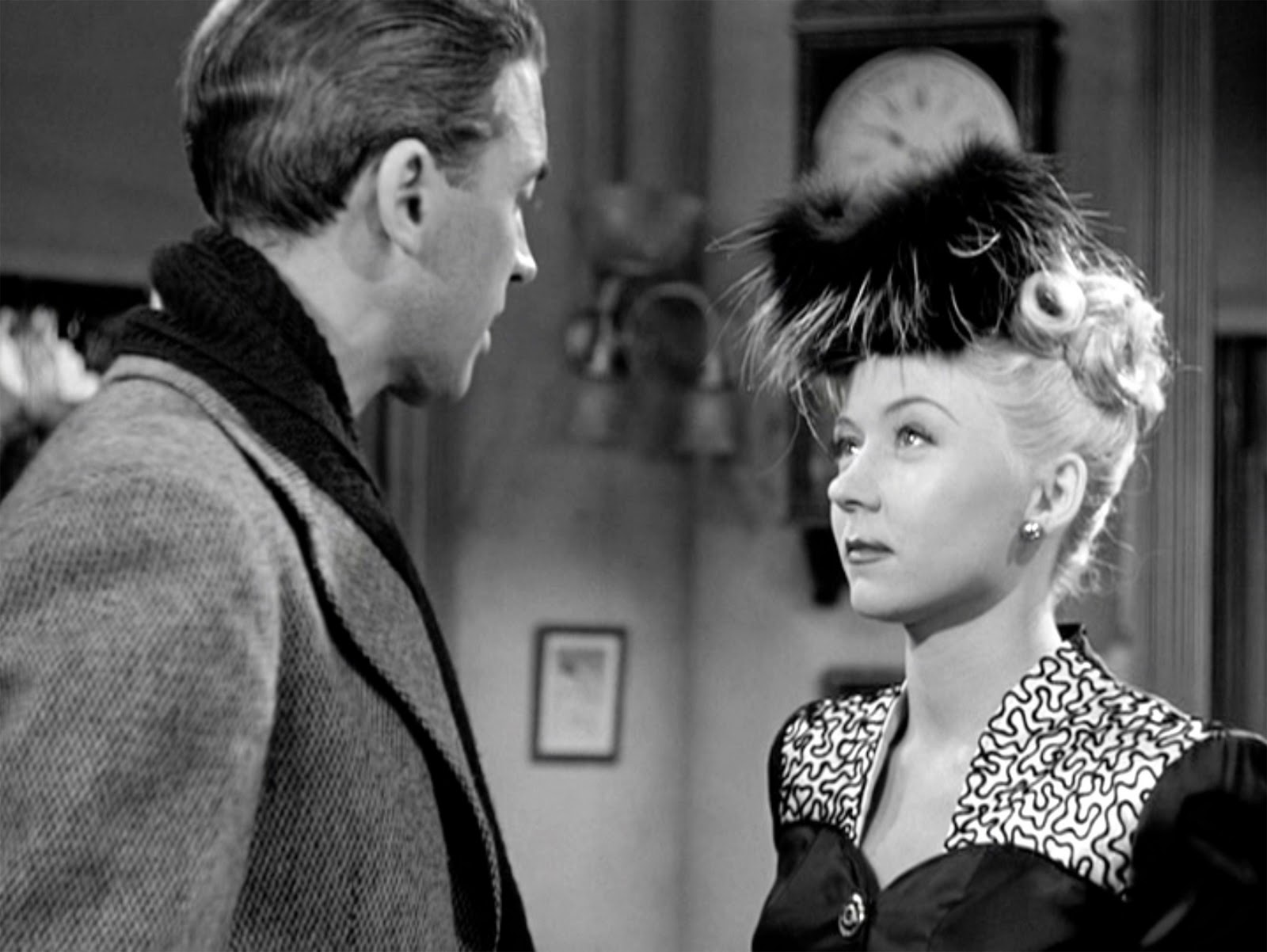 That’s not to say the film is riven in blue-collar grime, because as a semi-fantasy piece it delivers just the right balance of heart and soul amongst the tears and rage. The inclusion of an angel, in the form of Henry Travers’ impish Clarence, may seem fanciful to some but it allows the story to jump through time periods as we witness the successes and failings in George’s life, leading to his inevitable suicide attempt. It’s a dark opening to a story filled with such hope and joy between the fateful sorrow George seems to fall foul of – his inability to extricate himself from Bedford Falls and “become his own man” is the catalyst for a lot of his character’s angst and regret, despite marrying the love of his life and remaining a man of integrity and honesty when plenty around him do not. The fantastical nature of the bridging narration, provided as a conversation between the angels watching in heaven above, allows the audience to have hope that everything will turn out okay, but the dark journey George goes on is one that will forge him as a man forever, and at times you have to wonder if his suffering is truly worth it. 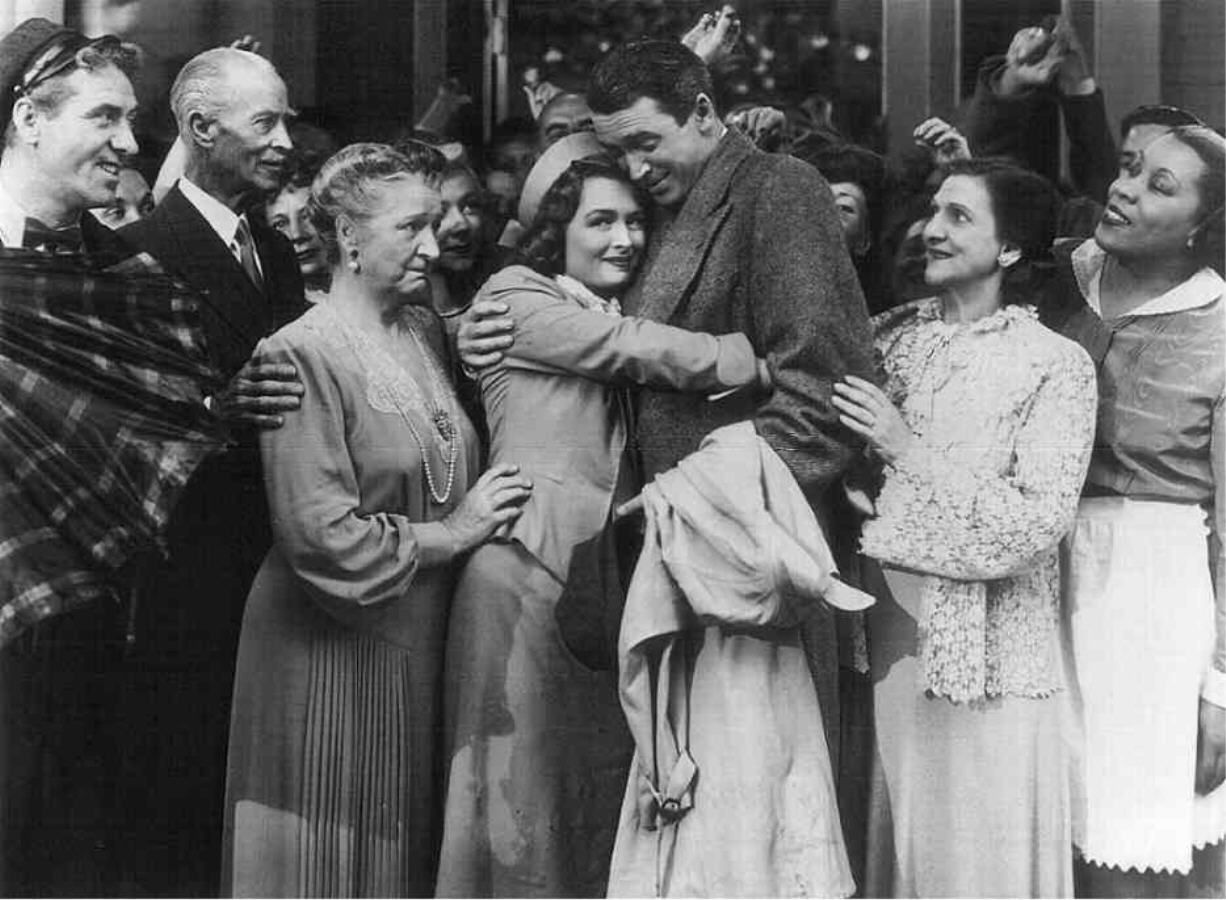 There’s a almost a Christ-like religious mirroring in Capra’s film to some degree, painting George as a man of proven worth and ethical, moral and liberal goodness, beset by challenges to test his character before his near-death – did George actually make the choice to kill himself on the bridge that cold, snowswept night, or did Clarence’s sudden intercession (jumping into the water below and forcing George to save him, therefore saving George from his own suicide) remove any further thought on the matter? The film isn’t specific with whether George actually would have gone through with it, which kinda robs us of a truly tragic catharsis in some sense, but the fact he was indeed contemplating it in light of all that had transpired is enough to generate a requisite amount of concern within the audience. The screenplay expands considerably the original short story by Philip Van Doren Stern entitled “The Greatest Gift”, attributed to Frances Goodrich, Albert Hackett and Capra himself, and balances the whimsy (the saccharine romance sequences between Stewart and Reed are delightful but a touch overcooked with a side of ham) with the truly malevolent (the odious Potter gets the lion’s share of boo-hiss moments, and Barrymore absolutely gorges himself on the scenery with every passing frame, he’s having such a grand time playing the bad guy) with a delicacy I really thought worked well – again, it depends a lot on your ability to get past the initial fantasy elements of angels and heaven basically being depicted as clouds of stars but if you can then you’re more than halfway there. 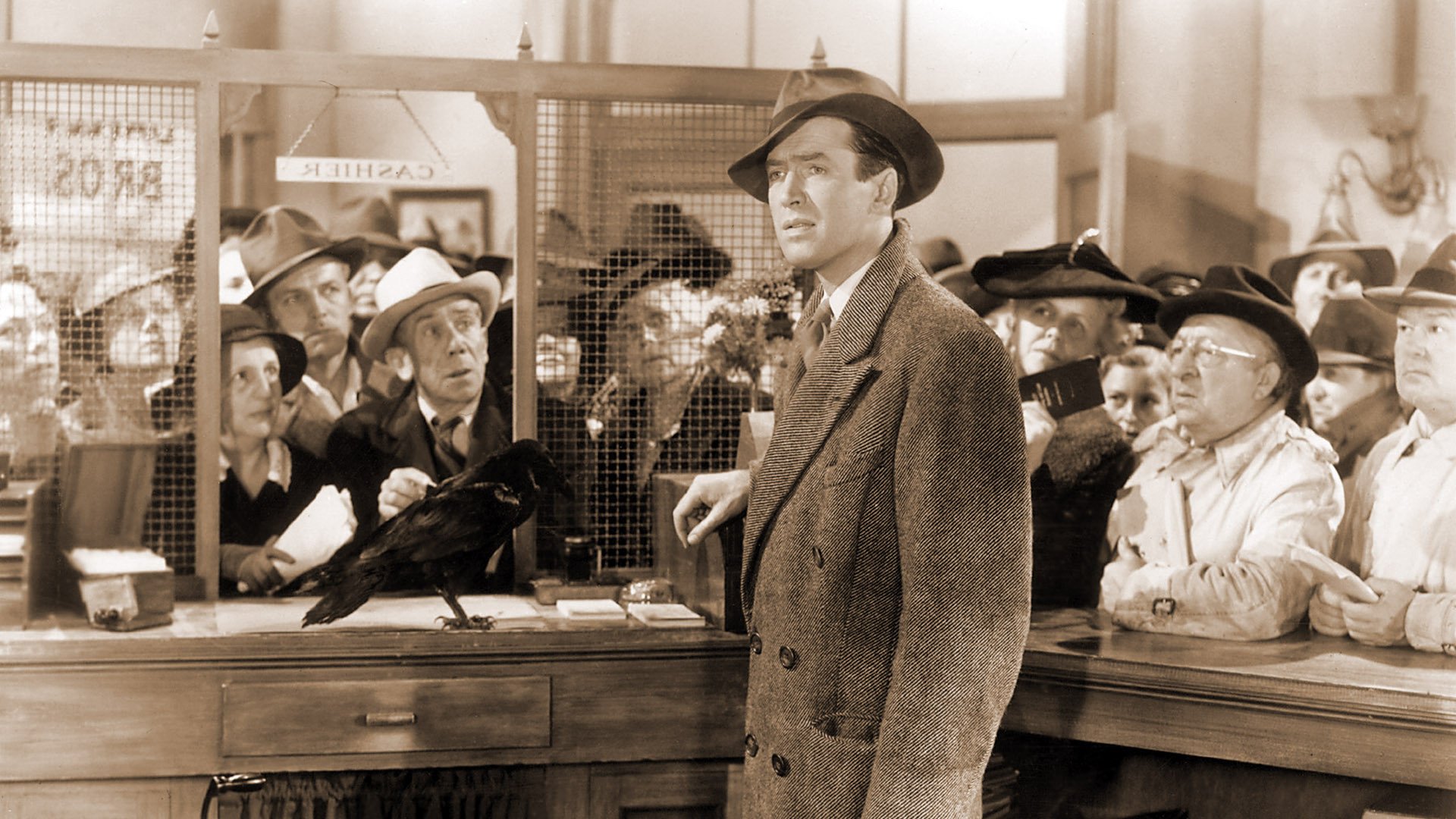 Aside from Stewart, who delivers the performance of his career, the supporting cast are near faultless. Barrymore and Reed are altogether superb, the likes of Beaulah Bondi, as George’s mother, William Edmunds, as local barkeep Mr Martini, and druggist Mr Gower (HB Warner) have arcs within the film that will break your heart, while the various minor denizens of Bedford Falls all feel like they’re real people and have lived there forever. Thomas Mitchells’ turn as Uncle Baily ought to have warranted a Best Supporting Actor award all on its own, but alas it did not; Mitchell’s work here is sublime, and vastly underrated (he won an Oscar a decade prior for Stagecoach, so his ability is unquestioned despite being completely out-acted by Stewart here) to a criminal degree. The minor work by Gloria Graham, as the town’s local tart, Violet, is also worth a mention, as is the inclusion of two characters named Bert and Ernie, although one cannot assume Jim Henson made a point of making this a point. 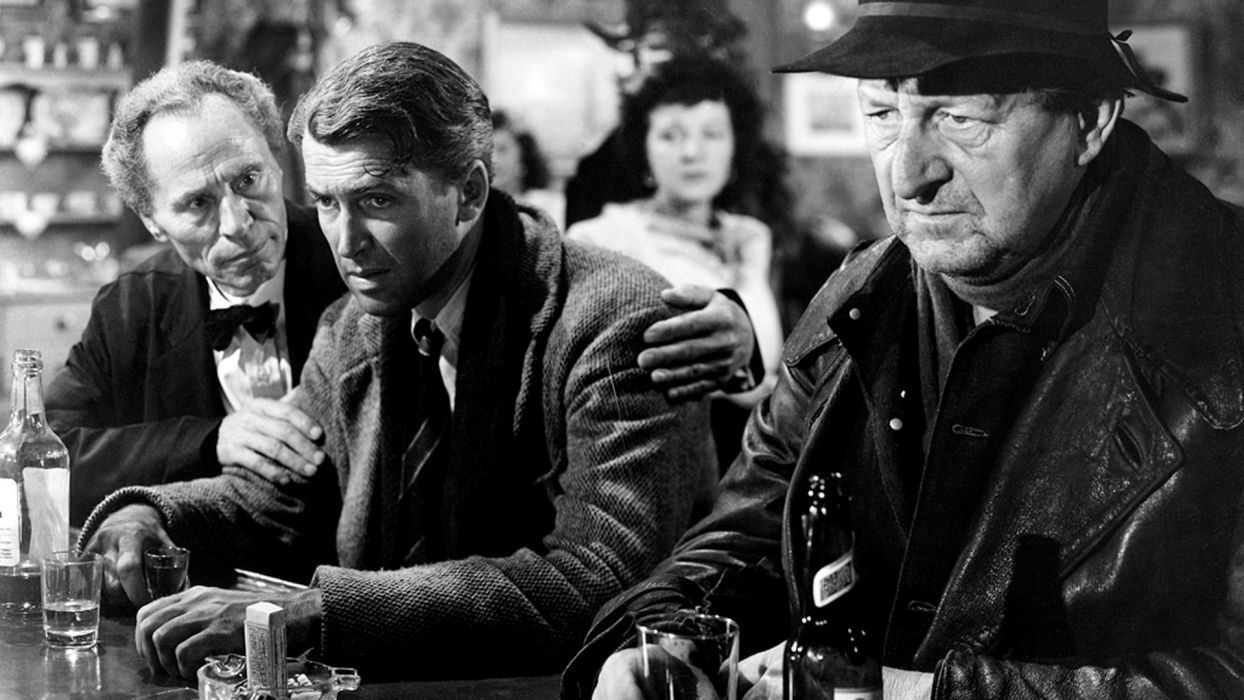 In terms of direction, the work by Capra and his team behind the camera is nigh invisible. Because we’re so drawn into the story and the characters and the time and the place, Capra’s camerawork, William Horneback’s astute editing and Dimitri Tiomkin’s orchestral score all feel intrinsic to the work; nothing works more than the other, it all fits snugly together, each aspect complementing the others superbly. Especially so too is the cinematography – credited to long time Capra collaborator Joseph Walker as well as the relatively lesser known Joseph Biroc – which positively sparkles in crisp black and white photography. The film’s recent 4K upgrade is a revelation (there are clips highlighting the difference between available 35mm prints and the restored edition) and the look of the film is one of deep, rich black textures and shadows (the film’s copious exterior night sequences could have been a malaise of indistinct shapes but end up being hugely well defined and easily a highlight) while the well-lit interiors and atmospheric lensing of key sequences and photochemical effects are as sharp now as they were in 1946, when the film was released. It’s a sumptuous looking film, this one, filled with all manner of eye-candy in terms of design and detail, and Capra’s appreciative eye captures the wax and wane of George’s life with consummate professionalism. 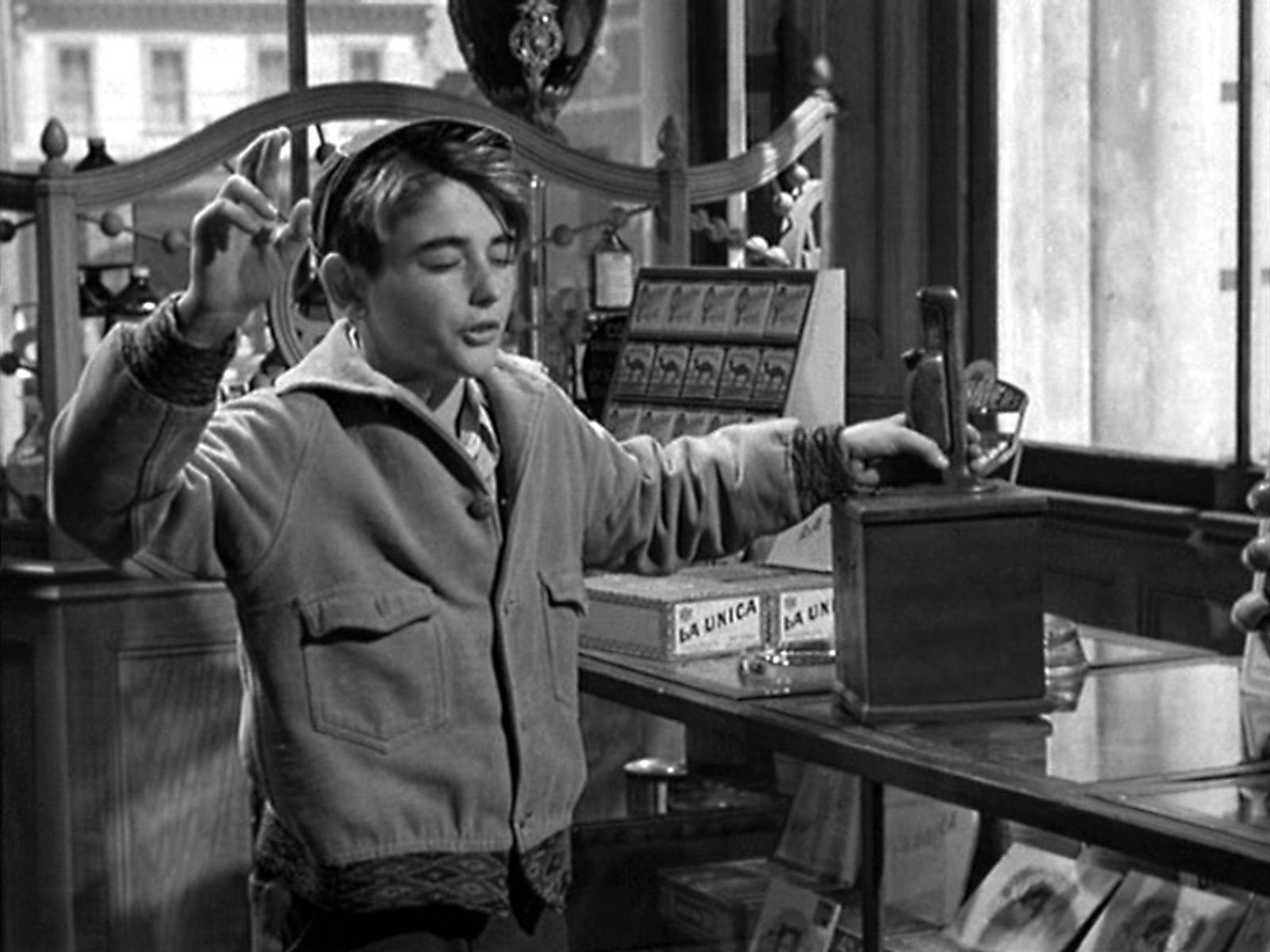 My viewing of It’s A Wonderful Life came with external caveats with regards to its allure and nostalgic power, mainly from folks living outside the United States, but even considering that I’m not from that country I still found the film utterly hypnotic and sweetly satisfying. For what it’s worth, I did tear up at the end, so the film’s success worked on me. I can imagine those with harder hearts maybe being put off by its sentimental nature and gee-whizz charm, which seems like a lost subgenre these days, more’s the pity. Capra’s films always seem to contain the distillation of what Americans think makes America great, and It’s A Wonderful Life is the personification of that distillation. Well written, supremely well acted and directed almost invisibly by Capra at his peak (notably, the film was something of a box-office failure at the time, although the years since have retroactively put that to rest as it’s now considered one of the greatest films ever made), this perennial Christmas favourite is most assuredly a masterpiece of Hollywood filmmaking and a true artistic success in every measurable modern way.