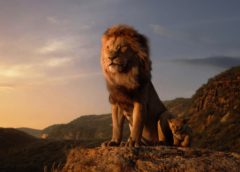 Disney’s animated classic The Lion King comes in for a “live action” recreation at the hands of studio muse Jon Favreau, the guy behind the original Iron Man, and more recently The Jungle Book. Taking what he learned on the latter film, Favreau has adapted the story of young Simba within the confines of an exquisitely computer animated feature, or rather a “photorealistic” style once more, trying to put a coat of modern pixel paint atop the studio’s most renowned modern masterpiece and failing utterly to tell a compelling story. The 2019 edition of The Lion King might look amazing – and it truly does – but the overly serious opening third, and continuous, unwaveringly insipid nods to the animated movie, will make fans of the original cringe while a new, younger audience gasps in awe at the technical wizardry on display. 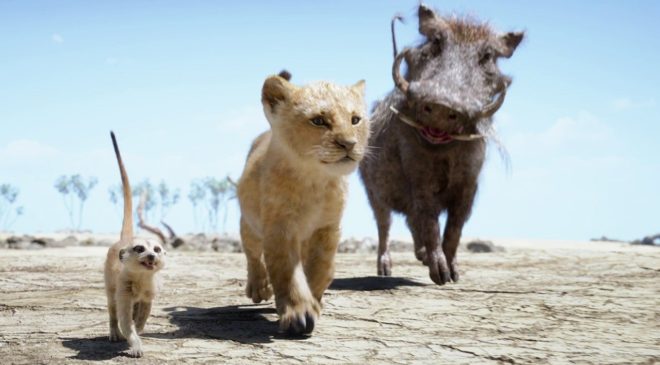 The film is quite the spectacle: Elton John, Hans Zimmer and a cast of (mostly) new voices deliver a film of rampant beauty and post-modern style, although somehow turning the original film’s brisk 88 minute runtime into a near two hour slog, adding nought but intriguingly animated interludes as well as a new Beyonce song (because why not) to pad it out a little longer. The crux of the story, in which Simba’s rule as king is usurped by his evil uncle Scar after the older lion murders Simba’s father, Mufasa, plays as a terrific coming-of-age story that has resonated with audiences for decades now, only here the focus is lost betwixt the pixels and gorgeous rendering of African savanna, ending up as inert a story for newcomers as Disney’s current live-action remakes can deliver. Where once were captivating characters with complex emotions and anthropomorphised humanity now sit supremely well animated yet emotionally vacant reboots of our favourite animated animals, dormant between frames and sunken beneath an all-too-solemnified reverence for the source material. 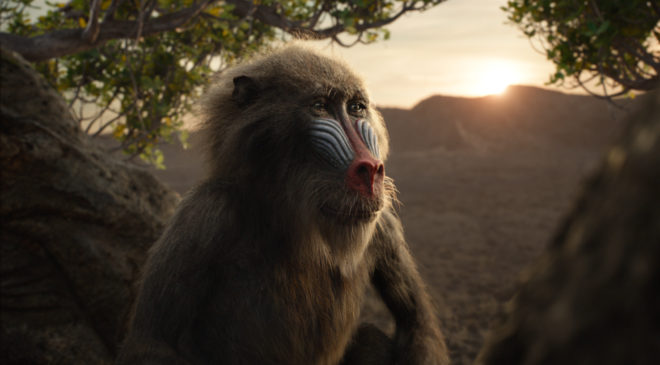 The problem lies with Favrea’s decision to go to the extreme of realistic animal depictions. The film hovers between the cutesy Babe style of talking animal routine (which would have been great), and a resistance to making the digitally animated avatars too cartoonish. It’s a cartoon in ultra-resolution, and it simply doesn’t work. Whereas the animals of the 2D animated film had facial expressions we could read to match the vocal performances, in Favreau’s film the lack of emotion behind the animals’ eyes removes a significant chunk of our empathy towards them, reliant instead on sombre vocal intonations from the incoming cast. Without this ability to humanise the animal characters, Favreau creates distinctly empty vessels upon which such an emotion-charged fable rests with an unwieldy uncomfortableness. There’s no human connection to the screen, no sense of life behind the exquisitely designed artificial lifeforms, and that’s the film’s great ruin. 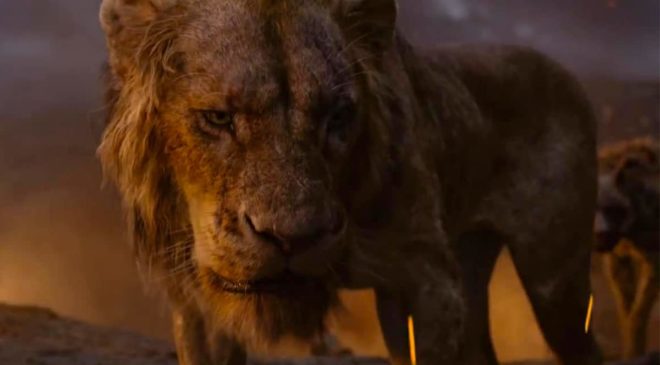 The only holdover from the original film, James Earl Jones, reprises his work as Mufasa as if awakening from a week in a coma, bereft of import or a sense of genuineness, replaced instead by pause-ridden homily to his earlier role. Bland line readings are the film’s secondary failing, and Jones, abetted by incoming talent such as Chiwetel Ejiofor (replacing Jeremy Irons as Scar), Alfre Woodard (as Sarabi, Simba’s mother), and Donald Glover as an adult Simba, fail to generate any kind of emotional weight behind their work: the film’s voice work is generally as lifeless as the animation itself, bordering on an expensive fan-film version that suffers itself all too harshly. Popular talk show host John Oliver seems to be having a grand time playing the stiff-upper-lipped Brit minority, replacing Rowan Atkinson as Mufasa’s aide, Zazu, but at times it’s incredibly screechy. The only true shining light here is the inclusion of Billy Eichner as Timon, the verbally unchallenged meerkat, and pitch-perfect Seth Rogen as Pumbaa, the warthog, who work well off each other at almost the same level as Nathan Lane and Ernie Sabella did two decades prior. As before, it’s here the film’s smothering melancholy rises ever so slightly, a glimmer of humour and fun briefly moving the gloom of Favreau’s desperately earnest realism for a smattering of homages (the “censored fart” gag from the original film gets a run but is ruined by postmodern antipathy), and a lot of the animated film’s best jokes seem to be an embarrassment here, slipped in and overrun by a tortured, agonised orchestral score from returning composer Hans Zimmer. 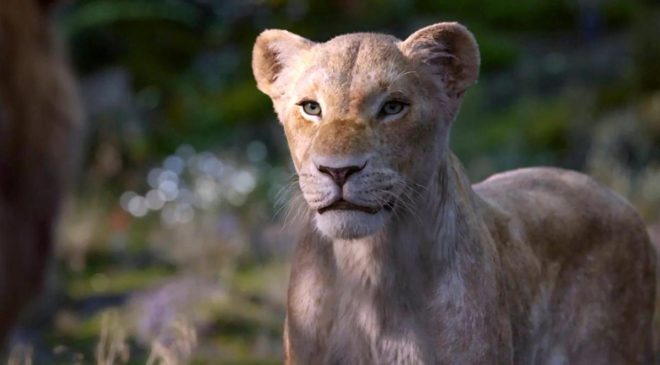 I feel like a bit of Grinch for suggesting this of course, but in turning these well known characters from their cartoonish beauty into a David Attenborough wet dream ruins the entire meaning of the story; some might argue that a good story can stand on its own regardless of style or tone or a director’s choices (poor or otherwise) but The Lion King’s fabulous “boys own” journey narrative and deconstructed familial complexity runs afoul of its own cleverness of design. It was a mistake to turn once mighty animated icons into soulless digital artefacts, sucking the very essence of what made the original film so popular, and no amount of stunning cinematography can perform CPR enough to resurrect things at any point throughout. In perhaps the greatest oversight, the best part of the film is the addition of a new Elton John track playing over the end credits, although even the maestro himself has suggested Disney messed up the music in this one and ruined the Academy Award-winning greatness of the earlier work. 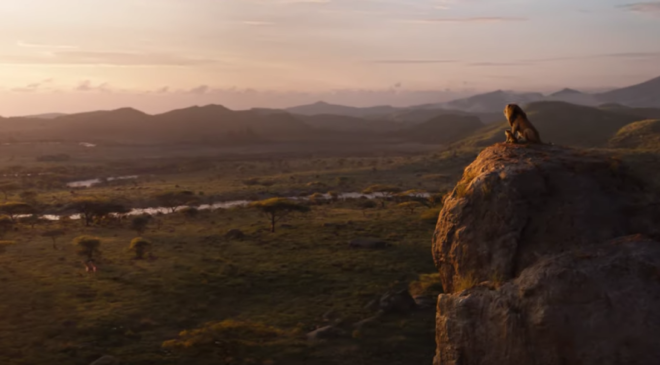 Older fans of the original film will be aghast at just how bland, slow, ponderously pandering to slavish idolisation this new Lion King turns out to be. It’s so beholden to the original film it almost feels afraid to strike out on its own, and when Favreau does take a step outside the box it’s for stupid and idiotic reasons indeed. Beyonce’s new song, some garble-mouthed thing entitled “Spirit” lacks the subtlety to embed itself within the film overall (it plays over the top of Simba’s journey back to the Pride Lands from the jungle he grows up in with Timon and Pumbaa) and sticks out like proverbial balls on a pig compared to the rest of the franchise’s iconic tunes. Dammit Disney, not every reboot or remake needs a new song to sell it to the younger kids – just look at that tone-deaf  feminist bawling you included in your Aladdin shitshow – just put in the songs everyone knows and it’ll still work just as well. I suspect new, younger kids might find this Lion King some kind of classic in years to come (even if the Mufasa death scene here lacks even the tiniest glimmer of sadness) and for that I feel most sympathy for them. They won’t understand the torment and sleepless nights of kids lying in their beds having lived through the animated Mufasa’s death in the wildebeest stampeded and crying into a pillow in distress. Instead, they’ll have a boorish, hideous Chiwetel Ejiofor rendition of “Be Prepared” to howl about. 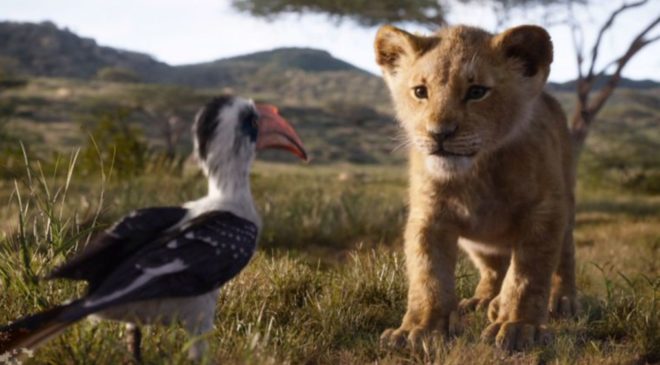 Disney’s 2019 The Lion King might look pretty, but it’s an ugly thing indeed when you start to dig deeper than a clever marketing campaign. Gone is the lavish design of talented Disney artists in bringing hand-drawn animation onto the African plain, replaced by what I might photograph with a RED camera and some well trained animals if I had a spare quarter-billion dollars, which is what the studio apparently spent on this lifeless corpse of a thing. Things that work well in a cartoon don’t always translate as easily to live-action, this film confirming it with bizarre sidebar moments and a resoundingly inane re-purposing of several key lines, elements and characters. The Lion King is an abortion of a film, a half-baked treasure trove of animated artistry lacking coherence, entertainment or a reason to exist. Gasp in awe at the clever photography, but asking for depth or quality in both story and characters here is an exercise in futility.