Is John Wick Chapter 3: Parabellum a hitherto unknown Matrix sequel? It would seem so: the addition of Laurence Fishburn in Chapter 2 and now Matrix Revolutions supporting player Randall Duk Kim (who played The Keymaker in the Wachowski’s seminal sci-fi noir trilogy) pops in here as a character who aides Keanu Reeves’ titular character in escaping imminent danger. Never mind that director Chad Stahelski was Reeves’ stunt double in The Matrix, it does feel a little like somebody “getting the band back together”. All that aside, John Wick’s third big-screen outing is yet another headpopping violent action adventure, a feast of delicious cinematography, a barrage of flint-eyed headshots and horrifying death, and yet another expansion of the mythology of the Wick franchise’s assassin-centric tableau, all of which occurs within and without the denizens of the world’s great cities even being aware. 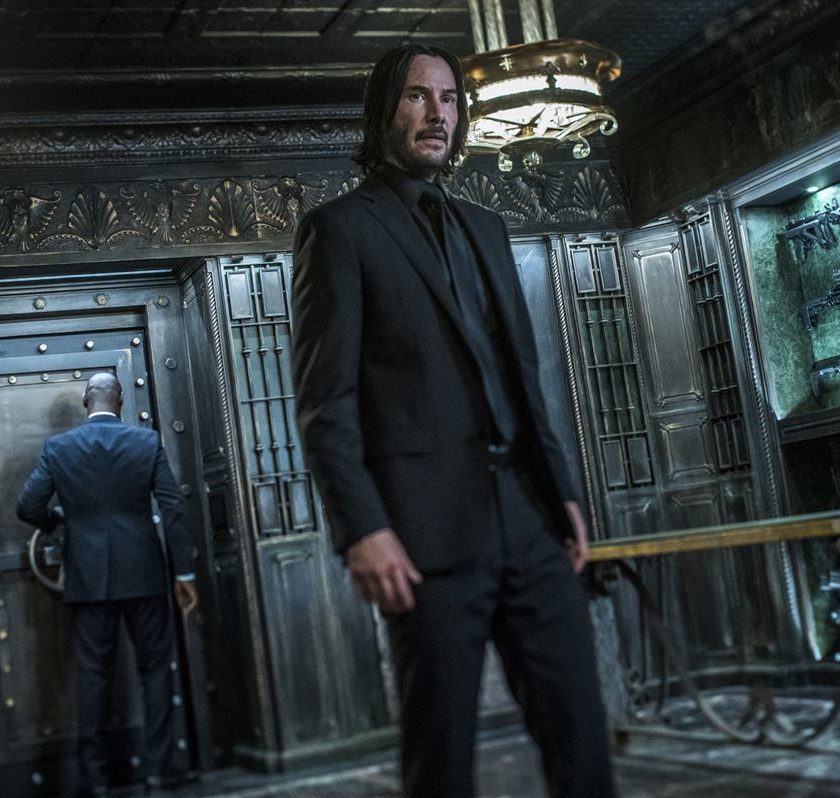 At the conclusion of Chapter 2, John Wick was excommunicated from the assassin’s guild, with a bounty placed upon his head in the event of his death. Picking up almost immediately after, John is pursued through a gloomy New York City whilst friend and ally Winston (Ian McShane), the owner of the Continental Hotel, attempts to assuage the High Table’s Adjudicator (Asia Kate Dillon) that he is innocent of helping the now fallen killer. The Adjudicator makes contact with Japanese assassin Zero (Mark Dacascos) and tasks him and his acolytes with killing John Wick, whilst Wick travels to Casablanca where an old friend, Sofia (Halle Berry) takes him to meet a member of the Table (Game Of Thrones‘ Jerome Flynn) to plead his case. As the tsunami of assassins follows him to collect the High Table’s bounty, John returns to New York to confront Zero and perhaps even bring down the High Table itself. 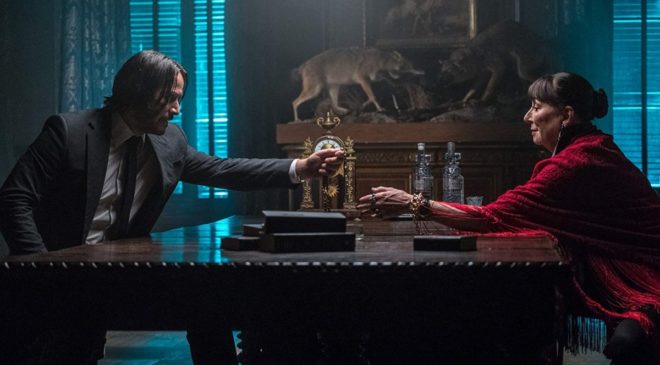 Draped in eye-popping cinematography and edited with an almost sublime eye for action, John Wick Chapter 3: Parabellum (a Latin word meaning “prepare for war”, whilst also unironically a designation of bullet cartridge) hardly wants for style. With its non-stop action and balletic, often heinous body count and graphic violence, Parabellum resists threequel temptation to do something different with a franchise that has been built on simplicity and a disposition for brutality. It’s a known quantity, and audience’s expectations are more than met. Reeves’ personifies the “tragic assassin” archetype, a man haunted by the death of both his wife and puppy (as told in the original film) and who so desperately cannot avoid his past and legacy that, inevitably, he accepts his fate, consequences be damned. Reeves mostly grunt and whispers his way through this slam-bang shoot-em-up feast, a sense of bewildered inevitability plastered across his face most of the time, whilst the widening of the Wick world, with its hidden shadowy organisations and eyeball pleasing star powered cameos (Anjelica Huston playing a Russian tsarina is a particular, peculiar joy) and for sheer vicarious rage-release few film series’ come with as much inbuilt adoration as this one. 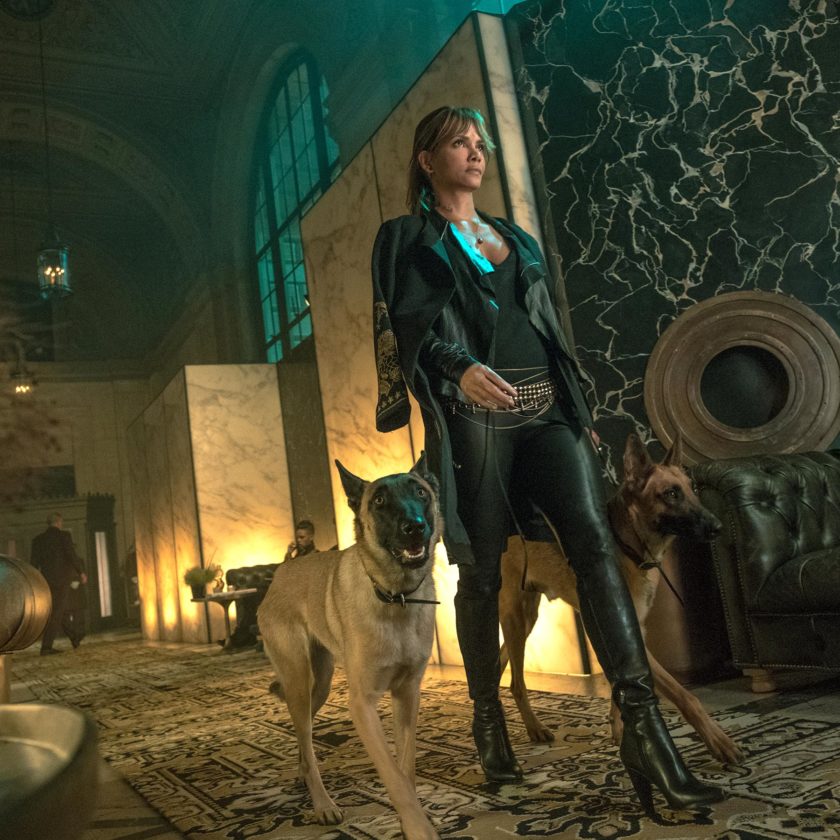 Yes, if you want to see Keanu blast his way through a tidal wave of faceless bad guys and see Halle Berry and two impeccably trained canines strip shreds off a legion of overweight and insufficiently trained bodyguards (it’s the film’s keynote sequence, to be honest) then Parabellum will tick all your boxes, because that’s primarily what the film has going for it. Throw in Mark Dacascos as a samurai master who has the privilege of taking on John Wick mano e mano, returning players Ian McShane and Lance Reddick as Wick’s reliable associates, and Laurence Fishburne as the sarcastic Bowery King, and you’ll be salivating over the thought of all these A-listers congregating to participate in a film series where the core tenet is to simply kill as many people on screen as humanly possible. The finale is a Continental-set onslaught of weapons and near-invincible henchmen intent on killing Wick and his buddies is a dingy, hugely operatic homage to great Western showdowns of Hollywood lore – you know, where the hero lays booby-traps and sucker-punches the various hordes of assailants until it’s just him and the Main Villain (in this case, Dacascos’ incredibly bald and ballsy Zero) in a sweaty, bloody smackdown that will have you white-knuckling it throughout. Will Wick survive? Will he come out unscathed (spoiler: no) and will he get the girl (another spoiler: hell no, Wick ain’t about that booty, guy): Parabellum is a flat out action masterpiece. 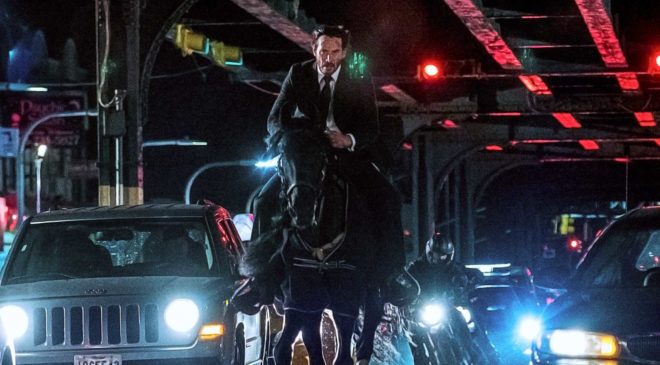 Stahleski’s direction again favours style and frenetic action over substance, but that’s the point. His crisp cinematography and insane editing make Parabellum’s gunplay and violent antics look and feel like a hardboiled noir film with a side serving of weaponry. Except that it’s not a side serving, it’s a main course. The kills are all bone-crunching, head-splatteringly visceral (if you made it through both the first two films thinking “that wasn’t quite enough killing for me” then Chapter 3’s menu of bodily wounding and endless magazine clips emptied into varying waves of gun-toting assailants may satisfy you…) and Stahelski’s direction of action is a level above the cookie-cutter Hollywood style, more in keeping with an Asian influence a la John Woo and Stanley Tong, or Tsui Hark, and the sizzle coming through the lens is simply remarkable. That is all occurs with a neon-infused glow is simply icing on a glorious blood-soaked cake. I know, food metaphors for John Wick may seem ill-advised but that’s what I’m going with. 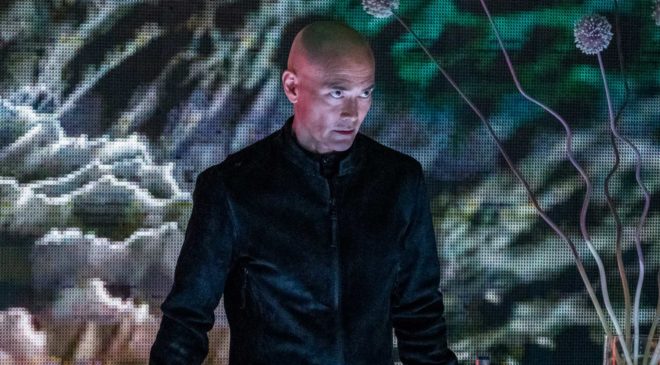 One of my chief criticisms of Chapter 2 was that Reeves’ Wick never really felt challenged, that he was simply the unkillable hero, and in creating a sense of invulnerability about him it greatly reduced the tension inherent in his situation. Thankfully, Parabellum reverses this issue and presents Wick with a genuinely legitimate threat he may not overcome, and bless him in that he actually makes mistakes, or at least doesn’t always come out on top. I think the prime subtext of Parabellum is loss and a sense of fatalism in one’s providence, and Wick personifying the arc of a resistant player in this great game gives the simmering anger inside him something to bounce off. The film once again sets up a salivatory sequel, with twists and turns coming thick and fast to give whatever Chapter 4 will deliver a real sense of tragedy. Wick, a man who has previously escaped his old life before being sucked back in, now fully embraces it to the terror of those around him. Parabellum: indeed.