Following the halcyon days of the early millennial Matrix sequels, Keanu Reeves seemed to disappear off the map. A role in Constantine (a film you’ve likely never heard of, except if you’re enjoying the current television series revamp), and a bizarre turn in A Scanner Darkly, as well as opposite Sandra Bullock in romantic drama The Lake House, left his career free-falling from the top of the A-list he enjoyed immediately in the aftermath of The Matrix. And the less we talk about The Day The Earth Stood Still, the better. Most recently, I witnessed the debacle of 47 Ronin, a “white man in Japan” flick that deserved better, but delivered worse. Yeah, ol’ Neo has certainly had a few bumps in his career as a Hollywood action star. Reeves seemed almost irrelevant in 2014, an actor whose star had faded, and he no longer commanded the kind of film he’d aced back in the 90’s. Anyone under the age of 15 would probably have to Google his name to find out who he was. To my great surprise, John Wick represents Reeve’s return to cinematic glory. Similarly to Liam Neeson’s turn in Taken, the film that launched his late-stage action career, John Wick’s blasting action staging, and cheesy, pulp-movie style are both engaging and subversive – you don’t expect much from this film, but man, does it deliver. 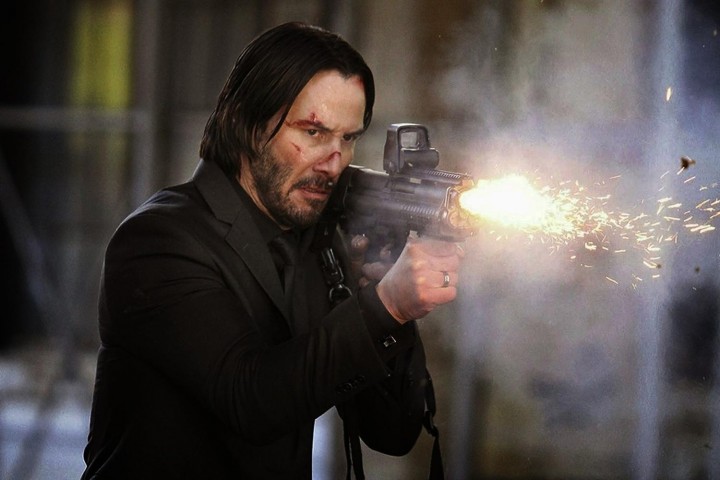 If you’re a fan of revenge thrillers, John Wick probably isn’t the film for you. Oh sure, it’s a “revenge thriller” in the vein of its contemporaries, but it’s predicated on such a silly hook it’s impossible to take this seriously. Wick (Keanu Reeves) is a retired assassin/contract killer/hitman, whose wife (Bridget Moynahan) has just died of cancer. Her dying wish is that John raise a puppy, as a method of dealing with his grief. Wick is brutally attacked in his home by a  gang of Russian thugs, after a brief encounter with them at a fuel stop, leaving his car stolen and his newly acquired puppy dead. Wick, seeking revenge, goes after the Russians, leading him into direct confrontation with the head boss man, Viggo Tarasov (Michael Nyqvist), with the key story point being that it was Viggo’s own son, Iosef (Alfie Allen), who killed Wick’s puppy. 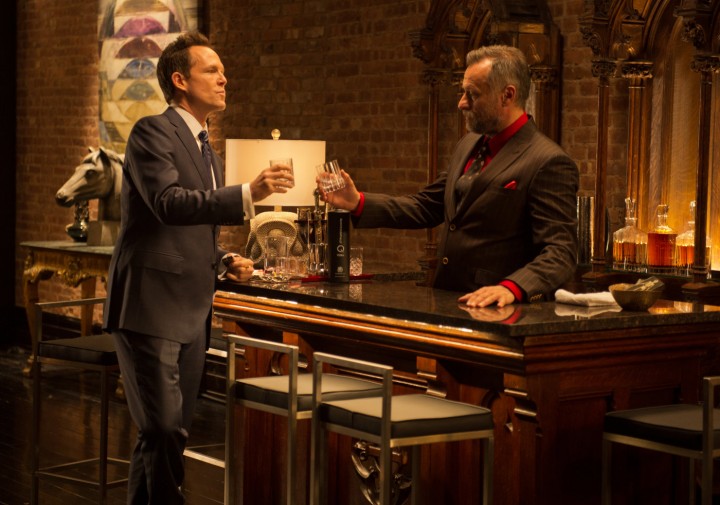 So yeah, Wick’s vendetta against the Russians is over a dead dog. Sure, it was the dying wish of his late wife, and had particular sentimental and emotional meaning, but a dog? Okay, I’ll bite. The film needs to sell this as a plot point, and sell it convincingly for the rest of the film to work. Nah, the film didn’t accomplish this well enough to justify the carnage to follow with any meaning, but if you read it as a trigger of unreleased rage against an unfair life, it probably makes plenty of sense. Wick’s arc seems intent on not only taking the old “ex assassin returns to the world to seek revenge on old enemies” routine and riding that thing into the ground, but all but eviscerating it at the same time. John Wick isn’t a new film, nor is it particularly intelligent, but it does what it does with an old-fashioned brutality and adult-level bloodthirstiness that’s thrilling in most respects. 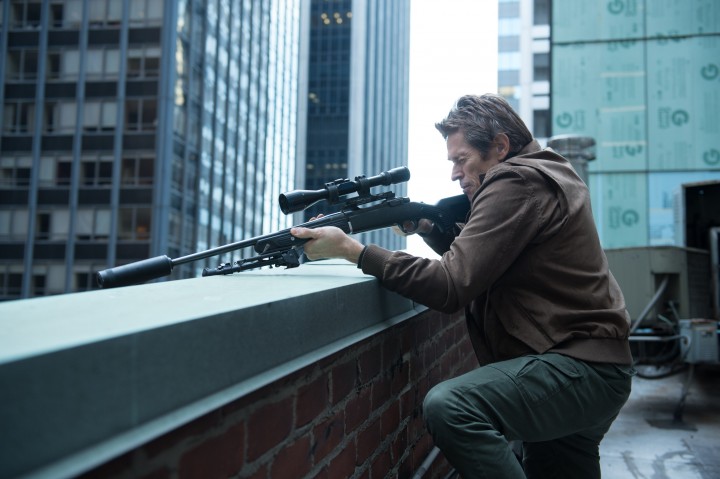 The film hangs almost entirely on the performance of Keanu Reeves, who is a long, long way from the digital aerobatics of The Matrix. Reeves starts the film looking like he’s out of his depth – he’s certainly not in the head-space for a fight, grieving for his wife and all. But an the movie progresses, and Wick throws off the rust to rekindle the skills of his past life, the brutal revenge story takes full flight. Reeves isn’t a great one for deep emotion, instead finding his footing with pure menace and a lack of concern over his own fate; Wick is methodical and utterly without mercy, as he slices, bashes and shoots his way through an orgy of faceless henchmen and thugs to find his mark. It’s a role designed for Reeves particular set of acting skills, and he delivers it perfectly. 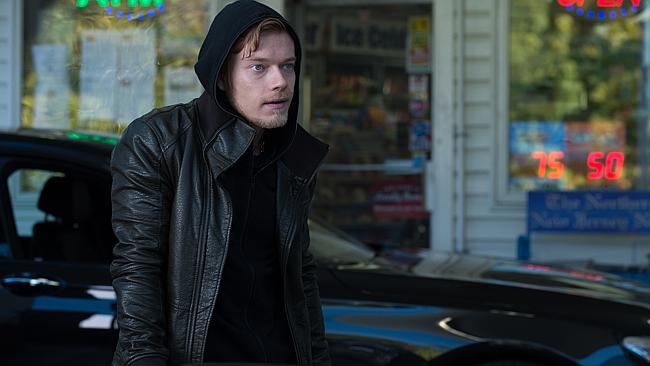 On the receiving end of all this bloody vengeance is Michael Nyqvist (who played the Daniel Craig role in the original Girl With A Dragon Tattoo movies), as the boss of what I have to assume is New York’s Russian mafia. It’s never implicitly stated, but that’s what I got. Nyqvist, caught up in this battle thanks to the actions of his infantile son Iosef, realizes more than most what Wick is capable of. He knows it’s only a matter of time and manpower standing between Wick and his vengeance on Iosef, so, in typical Hollywood style, he throws wave after wave of gun-toting Euro-trash bad guys after the dangerous assassin. I enjoyed Nyqvist’s work here, chewing the scenery and loving his tete-a-tete with Wick throughout. Alfie Allen, as Iosef, plays it remarkably similar to his Game Of Thrones role of Theon Greyjoy – Iosef is a simpering, blustering coward, trying to look good in front of his father and failing spectacularly in every way. Allen’s role is smaller than I expected at the outset, but he is slimy and arrogant enough to make me hate him with ease. 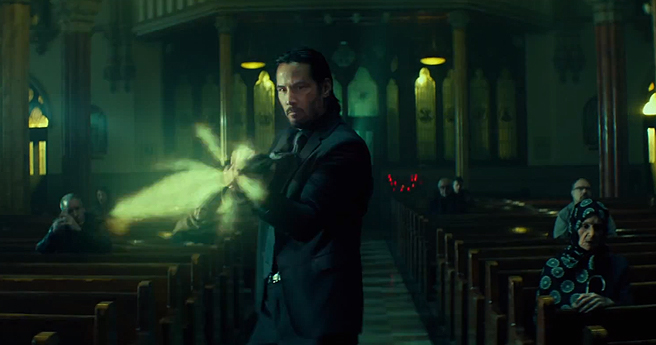 John Wick’s supporting cast is a who’s who of action films. Willem Dafoe has touched on similar assassin/killer ground before with Boondock Saints (and John Wick has a large amount of homage to pay to that film!), while Ian McShane and Adrienna Palicki are no strangers to action and thrills. Throw in Kevin Nash as a nightclub doorman, Lance Riddick as an “Assassin Hotel” Concierge (it’s cooler than it sounds), and John Leguizamo as a chop-shop businessman, and there’s plenty of great talent working here to make this film fun to watch. Dafoe plays a friend of Wick’s, who is sent to kill him by Viggo, while Palicki plays a fellow assassin like Wick, who turns on him when a bounty is place on his head. Everyone here appears to be having a great time. 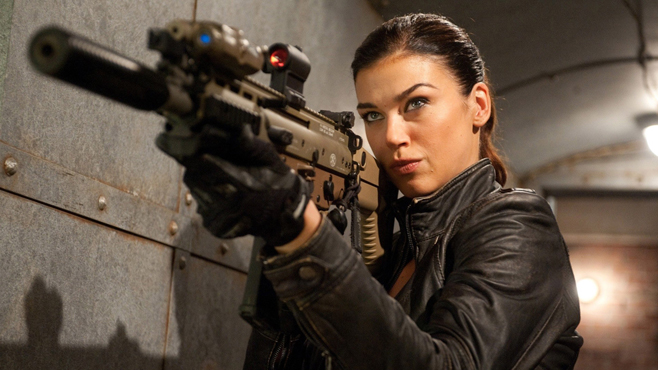 John Wick’s simple set-up is made even simpler by the fact that once the action starts, and Wick sets down his pathway of unrelenting violent revenge, the film kicks into high gear. The body count is enormous, a sluice-gate of blood and bullets, knives and fists all pummeling both the audience and Wick himself with hugely stylized action material. The film takes its time getting going, but once it does, it zips along with purpose and vigor. And blood, did I mention that? Wick is brutal with his slaying of his multitude of opponents, with plenty of sweet-ass headshots, and some brutal knife combat as well. Wick isn’t a superhero, he can – and does, a lot – get injured, but he has some nice skills with the guns and weapons at his disposal, and he engages the enemy like a one-man war on crime. 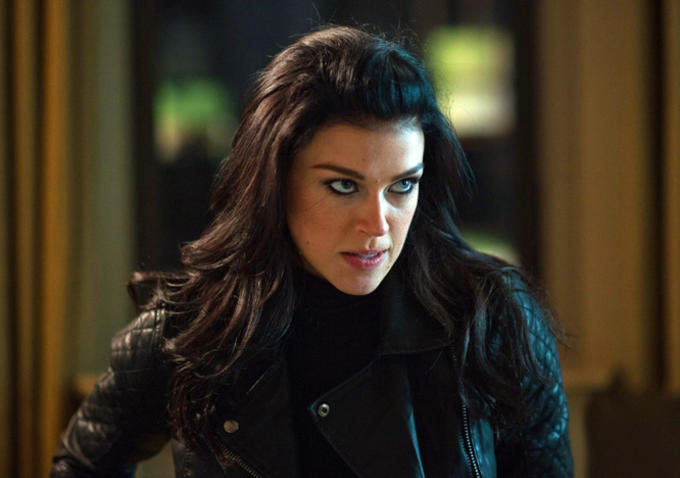 The film’s direction, by Chad Stahleski and an uncredited David Leitch, is stylish and slick, lacking pretension and delivering plenty of rapid-fire (ha!) stunts, kills and shocks. The guys understand what makes the simple story work so well, and do their best to give it an edge the likes of which we haven’t seen before. Does it always work? No, it doesn’t; surely, surely to goodness, somebody at the back of a room with a clear shot at Wick could take him out? Apparently, the only gunfighting this film enjoys is the close-quarters kind, generally in a crowded room, and with plenty of disposable meat in the middle. John Wick’s frantic action sequences are superbly staged, almost effortlessly done, a satisfying gamut of gunfire and gratuity that works to propel the slight narrative forward with considerable urgency. It’s more than enough to override any holes in the plotting one might notice. 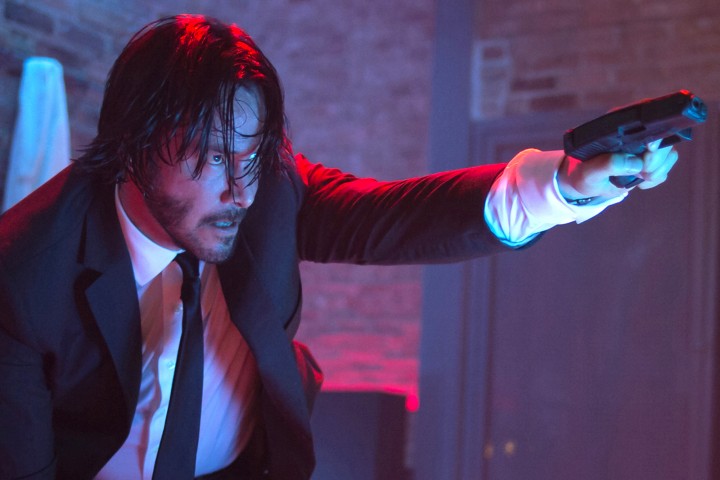 I really had a blast with John Wick. I’d really like to see him in action once again, although considering where the film leaves off, it’ll be a stretch to see him get back into the fray once more. That said, Keanu Reeves has had something of a career resurgence with this film, proving that although age might have wearied him, the destructive action of John Wick shows us he’s more than capable of continuing to mix it with the big boys.