Original Godzilla director Ishiro Honda returns to the popular kaiju genre with this 1961 Japanese creature feature, Mothra, featuring – of all things – a giant moth wreaking havoc upon the poor residents of Tokyo and its surrounds. Astonishingly silly and entirely preposterous, but always (and this is important) fun, Mothra’s kitsch and klutz and sheer filmmaking pizzazz work overtime in ensuring that regardless of vintage, this particular entry into the giant monster movie pantheon is altogether memorable. 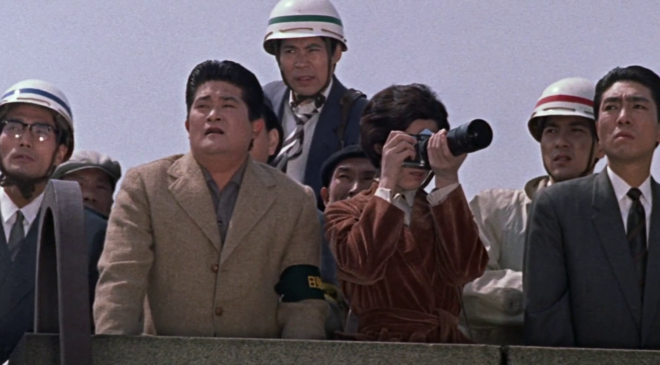 After rescuing a group of marooned sailors from a formerly deserted, radioactive island, it is discovered that the island is populated by a tiny, savage race of humanoids, all of whom worship an enormous, ancient deity known as Mothra. A team is sent to the island, led by capitalist asshole Clark Nelson (Jerry Ito), as well as anthropologist Shin’ichi Chujo (Hiroshi Koizumi) and sneaky newspaper journalist Zen-Chan Fukuda (Frankie Sakai); whilst exploring, they encounter a pair of two-foot tall females (played by Japanese vocal group The Peanuts, Yumi and Emi Ito), whom Nelson kidnaps and returns to the mainland to exploit for his own gain. However, the tiny women continue to sing a hypnotic tune as part of a psychic link to Mothra, who hatches from her lraval state back on the island and makes her way to the Japanese coast, where she begins to destroy everything in her path. Arriving unstopped against the famous Toyko Tower, Mothra enters a pupal state before the military bombard her with “nuclear cannons”, allowing her to burst forth as her fully fledged butterfly stage. With Nelson unwilling to give up his prized possession of the two miniature women, and Mothra’s destruction threatening the entire globe, Zen-Chan and his female associate, Michi Hanamura (Kyoko Kagawa) race against the clock to hatch a plan to save the day. 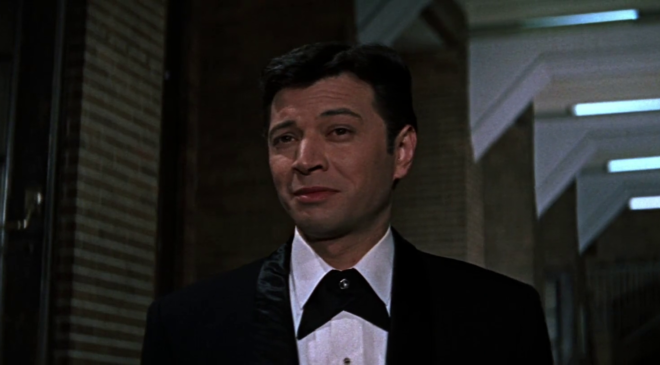 Mothra, perhaps moreso than Godzilla, represents the perfect kaiju film for anybody looking for an “in” to the popular genre. Inordinately cheesy, with hammy, caricature performances and an overabundance on miniature photographic trickery, sets and visual effects, Mothra might seem like a crappy low-budget schlock-fest that’s a far cry from the sweaty high-octane blockbusters we see swamp mulitplexes globally today, and you’d be correct. But where the original Godzilla (and it’s dingy Hollywood remake) took über-serious routes that tackle white-hot pop culture problems, Mothra is pure, unadulterated camp. From the terrible dialogue, Frankie Sakai’s buffoonish performance and the film’s overt silliness, to the laughably cartoonish models and practical visual effects used to bring a giant butterfly-moth-thing to life as it attacks a city, everything about Mothra is intended to induce laughter and a sense of inoffensive fun. It’s definitely a film not to be taken seriously. 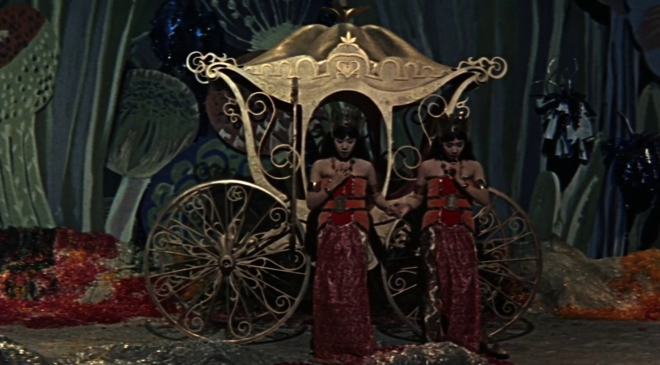 Sakai makes a sweet-natured leading man, lacking any kind of depth other than being “a good reporter” alongside Kagawa’s far more circumspect fellow newspaper reporter – as a photographer, Michi is actually pretty impractical, but the pair’s on-screen dynamic and Sakai’s natural comedic style (he was a noted comedian in his homeland) makes for enjoyable facile viewing. The film’s villain is arch-typically over-the-top, with Jerry Ito’s turn as the snide, conniving and unscrupulous Clark Nelson as roguish and hiss-worthy as you’d expect; troublingly, his comeuppance in the film’s final act isn’t worthy of his talent as a bad guy, more’s the pity. Hiroshi Koizuma’s work as a science boffin (or, as they’d say in Austin Powers: Basil Exposition) is hardly memorable, balanced by Takashi Shimura’s work as a very J Jonah Jameson-esque newspaper publisher being laughably hollow, but altogether great. The film isn’t built around character, and it certainly isn’t built around convincing scripting: Mothra works because the focus is on the creature, and the expensive model-destruction engaged in by the filmmakers. 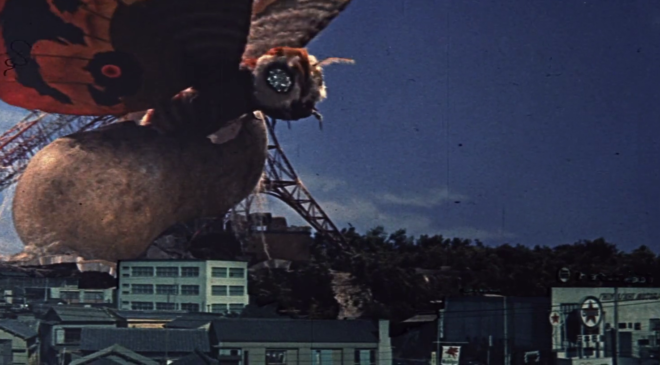 Mothra’s use of model work and miniature photography has to be seen to be believed (I’m not a huge connoisseur of this kaiju vintage, I’ll be honest) for its tenacity and unique creative embellishment. It’s a film that makes the obviousness of the visual effects work in its favour, a product of budget and the time in which the film was made, with rudimentary rotoscoping work used for a large portion of the sequences involving the twin singing tinywomen, and plenty of model cars, trucks, tanks, planes, rockets and boats used to sell the illusion of a giant moth creature scraping and flying through the city. At one point, the filmmakers decide to invite an American audience to enjoy it with the story moving to the ubiquitously skyscraper-ridden New Kirk City, which looks amazingly like a stand-in for New York City, a precursor to the Hollywood machine gobbling up the kaiju franchises with its own Emmerichian sense of showmanship. But Mothra came first, and delivers mind-blowingly silly effects that just fucking work, in spite of how silly and cardboardish they may look today. Honesty, Mothra’s weird 60’s aesthetic ought to have made it unwatchable, but in almost every aspect, it delivers. 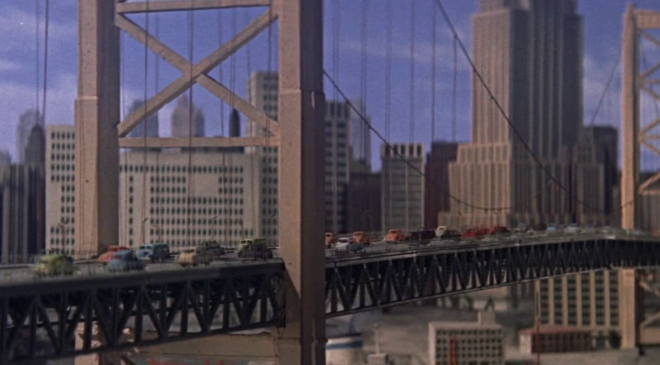 With a sense of frantic pace that never lets up, jaw-droppingly cool visual effects that predate computers, a haunting central musical motif that’s one part horrific, one part earworm-ready, and a sense of enjoyably hammy showmanship from director Ishiro Honda, Mothra takes the kaiju genre into an entirely different plane of existence. You’ll laugh, you’ll weep, you’ll have a blast with Mothra, a flat-out genre masterpiece that doesn’t give a shit if it looks silly or not, it just goes for broke in keeping the audience laughing and playing along.