When one thinks about “giant monster” movies, there’s traditionally two giants of the screen (pun intended) that spring immediately to mind. The first, King Kong; Hollywood’s poster-boy giant monster, originated in the 30’s and although never spawning a franchise, has become synonymous with hubris and spectacle of the kind only film can deliver. The second, arriving midway through the Fifties and derived as a metaphorical response to the bombing of Hiroshima and Nagasaki during WWII, Japan’s influential Godzilla (aka Gojira)would go on to become one of the most popular film franchises in history, but one of the most iconic of the modern age. Notably, Hollywood’s two attempts to recapture the original’s shock and awe – 1998’s Godzilla, and 2014’s Godzilla – kinda-sorta-almost worked in their own ways, but neither really captured that nuclear hysteria quite like this film did. 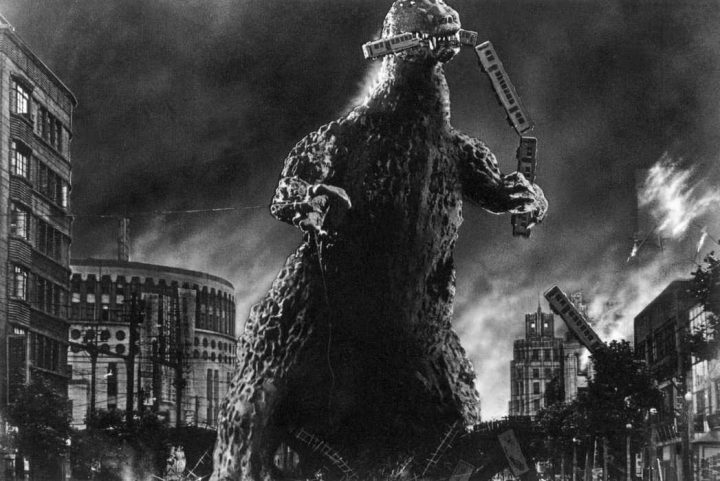 Beleaguered Japanese fishermen are reporting that strange events are occurring out at sea; boats being wrecked and people killed in unexplained “attacks” on vessels, leading to one sailor, Captain Ogata (Akira Takarada) to investigate further. Shocked, he discovers a giant beast lurking beneath the waves, wakened by nuclear blasts and now threatening to destroy everything it comes into contact with. As the newly named Gojira makes landfall, destroying all manner of infrastructure, it soon becomes apparent that humanity may not have the ability to destroy it.

In what I admit to be a surprising turn of events, within Godzilla is a surprisingly well constructed human relationship drama. Yes, it’s true. Although many would have come to see the titular monster, and rest assured the beast’s arrival in Tokyo is consistently destructive, the three-way love-triangle between Ogata, reclusive scientist Serizawa (Akihiko Hirata) and the girl they’re both keen on, Yumane (Momoko Kochi) is by far the most memorable thing in the film. Not to disparage the stunning 50’s visual effects, modelwork and small-scale miniatures, but Godzilla’s emotional heft is only emboldened by a rare event in “blockbuster cinema”, that of characters actually being well developed and interesting. I know, hard to believe.

From a story concept by Shigeru Kayama, and a screenplay by director Ishiro Honda and Takeo Murata, Godzilla begins as a mysterious unseen-monster flick and atomic age flashback before evolving into a reasonably compelling love drama; that is, well before the creature emerges from the sea to destroy most of Tokyo. The first half of the film largely consists of baffled and frightened people looking off-camera, before a cutaway reveals the partially obscured legs, feet or head of Godzilla, and only once the monster arrives in  the city, wreaking havoc, do we get the full sense of the creature’s size. And, putting it bluntly, Godzilla is a beast. Enormous in size (the dialogue stipulates some 125 feet high, although in fairness, these dimensions seem somewhat interchangeable depending on what it’s standing next to, much like Roland Emmerich’s version) featuring that iconic roar, and accompanied by a timpanic drumbeat with its arrival (even from underwater), Godzilla’s effects-driven audience-grabber sequences are pure dynamite, even by today’s standards. 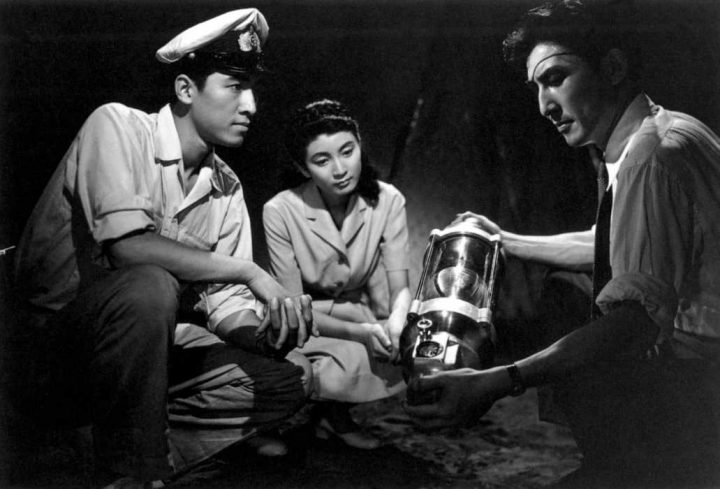 Godzilla strides across the screen like a goliath, a rage-fuelled creature of ancient destruction and no discernible motivation other than to lay waste to all in its path. The incredible miniature and model photography, all at high focus cinematic scale, are fantastic – moreso considering their age – and really do give a tremendous sense of scale, and for a film like this, that’s important. As a nuclear parallel, Godzilla’s sheer size is meant to approximate the destructive capacity of the hydrogen and atomic weapons tested in the Pacific as a cautionary tale, and the creature is indestructible by design. The beast’s bulk also makes him incredibly destructive, crashing his way onto land and devastating vast swathes of populated areas (because Japan is incredibly built up, I guess), and it’s through this plot mechanism that the film’s stunning visual effects come to the fore. Sure, Emmerich and Edwards may have had their fully digital extravagance, but Godzilla’s 1954 realisation is fully practical, and utterly compelling. As a “man in a suit” effect, the creature’s lumbering, slo-motion antics are at once enthralling and somewhat dodgy, while the now-famous roar sends a chill up the spine.

As a relative ignoramus when it comes to Godzilla’s screen legacy over the years (other than what I’ve read elsewhere), it’s a legitimate surprise to find the creature’s debut to be as spectacular and engaging as it is. Yeah, it’s dated, and sure, it’s comedic in places it probably shouldn’t have been (model cars and trucks crashing into model buildings still looks fake even by 50’s standards) but hell if it isn’t deserving of its iconic status in the medium. It’s little wonder such a simple premise has endured for over half a century.