Disney’s original 1941 elephantine Dumbo is rightly considered one of the studio’s most accomplished and adored animated classics. For every moment of its brisk sub-70 minute run-time it captures the imagination and – overt racial stereotypes aside – ingrains its fabulous animated sequences within the audience’s collective consciousness. The famous “Pink Elephants On Parade” scene was nightmarish as a child and jaw-dropping as an adult, while the central character’s realisation of his own ability (not requiring a feather in his trunk to fly using his overgrown ears) and the toe-tapping songs have cemented it as an all-time family favourite. Exactly what compelled director Tim Burton (Batman, Alice In Wonderland, Big Eyes), screenwriter Ehren Krueger (three of the worst Transformers movies, and co-writer on the recent Ghost In The Shell remake) and the entire Disney arsenal of creative talent decided to take the original story, double its running time, add in a variety of meaningless plotting and characters, and essentially turn an animated coming-of-age story into an animal-rights nightmare scenario that will make most kids cry out in anguish is beyond my comprehension. Money, I guess. 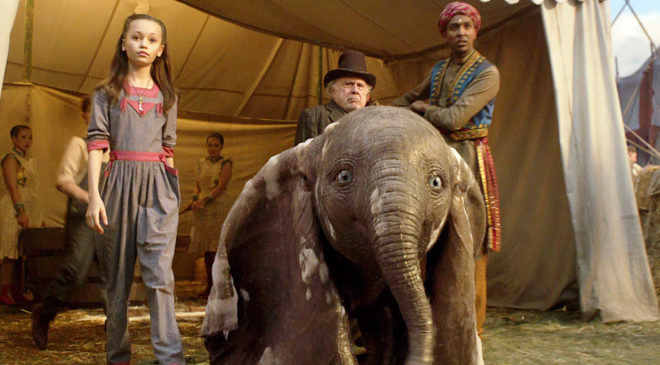 Struggling travelling circus “The Medici Brothers”, run by Max Medici (Danny DeVito), is looking for its next big hit, having been hit hard by the aftermath of World War I. Their troupe’s elephant, Mrs Jumbo, gives birth to a baby pachyderm with enormous overgrown ears, which Max initially thinks is useless for his acts. However, returning amputee soldier Holt Farrier (Colin Farrell) and his children, Milly (Nico Parker) and Joe (Finley Hobbins), soon discover that the tiny elephant can fly, so long as he holds a feather. With word of Dumbo’s flying feats reaching the ears of amusement park entrepreneur VA Vandervere (Michael Keaton), the ruthless businessman purchases Max’s troupe in order to use Dumbo in his own enormous property known as Dreamland. There, Dumbo works with aerial acrobat Collette (Eva Green) to draw in the crowds and make obscene amounts of money, and keep the acidic attention of his banker, J Griffin Remington (Alan Arkin) off his back. 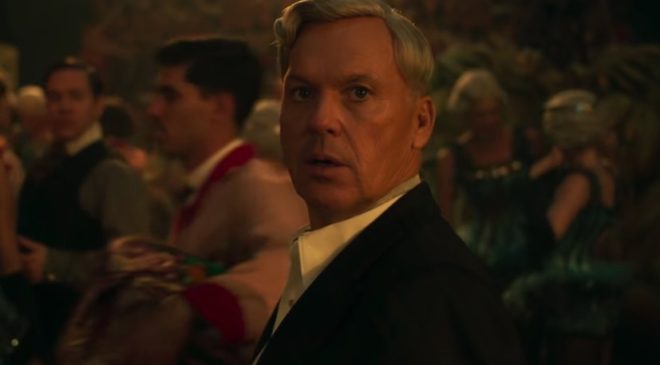 With its overabundance of melancholy, an indifferent villain and (sadly) no emotional character on which to hang the film’s hook to the audience, Tim Burton’s Dumbo remains a frustratingly impenetrable fable of animal freedom and discovery despite a solid cast, glorious production values and mostly excellent visual effects. Burton, no stranger to the bizarre and kooky – hell, he made his name on that kind of thing – tries to turn Krueger’s depleted screenplay into some fanciful fairy-tale, but the constantly depressing tone and astonishingly one-dimensional characters undo a lot of the good work in post-production. On paper, Dumbo should have been a home run for Disney and Burton, but as he did with the equally distressing Alice in Wonderland and the awful Charlie & The Chocolate Factory, the director’s visual sensibility overpowers the simplicity of story for hair-brained ephemera and (admittedly gorgeous) frills and affectations. Chiefly, the human characters, all of whom are new to this version of the story, brought to life by a roster of A-level talent (frankly, Danny DeVito hasn’t been this good in a film in a while) but even they can’t generate the enthusiasm for their roles the script demanded. And Dumbo himself, while cute, can’t manufacture his own arc beyond cute looks and multiple flying sequences. 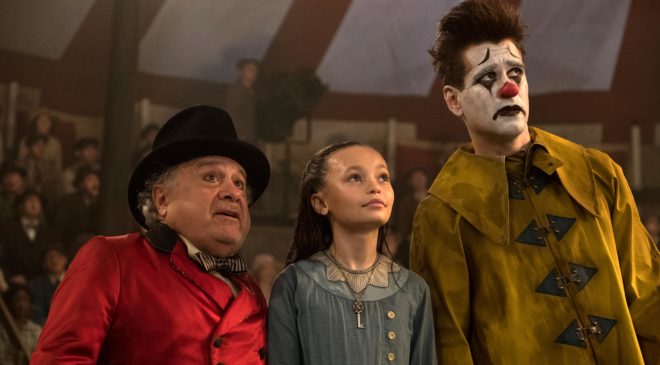 Yeah, you’re here to see an elephant fly, and Dumbo delivers that almost at the expense of everything else. The human story mixes the pathos of a war-torn soldier, the sorrow of two children without a mother, a businessman trying honourably to keep his circus troupe together in the face of financial ruin, and for some reason Eva Green on a trapeze, and can’t do any of that stuff well. Farrell’s one-armed soldier character was probably intended to be the focal point for much of the emotional investment but the script doesn’t make him accessible to the viewer beyond being “hey its a guy with one arm in this”, whilst his on-screen children are charming and effortlessly enthusiastic without actually doing anything meaningful. Young Milly is given a propensity for scientific curiosity (her hero appears to be Marie Curie) but exactly what this offers the overall story I’m still not certain, while sibling Joe, played by Finley Hobbins, might as well be invisible for all he brings to the movie. Alan Arkin pops in as a snarky New York banker and does his self-aware shtick that quickly bores, and a smattering of supporting characters – particularly Joseph Gatt as Vandervere’s chief henchman – have a few minor moments to do their bit, but at the end of the day you’ll struggle to remember any of them, let alone what they do in the story. 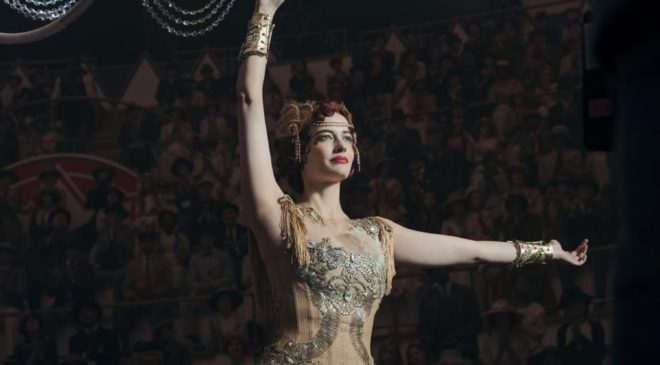 Michael Keaton, meanwhile, seems to be having a blast playing the ruthless and slimy Vandervere himself, his white coif and teeth-baring manner as broad a screen villain as he’s had opportunity to do recently. Inasmuch as it’s a step outside the box for Keaton’s recent career, the actor has done himself no favours with the role, a bland and unmemorable cliche writ large on the delightfully sugary canvas Burton offers us all. The fact the film can’t work out exactly who is the central villain of the film is indicative of its blasé attitude to its human components: Vandervere is the obvious choice, but Joseph Gatt is inbuilt into the film as a sinister bald thug who torments the children and the elephants far more than Keaton’s showman could ever muster. It’s a confusing imbalance that undermines a lot of Burton’s narrative, and reinforces Krueger’s dearth of conviction in establishing at least one human character the audience can empathise with. 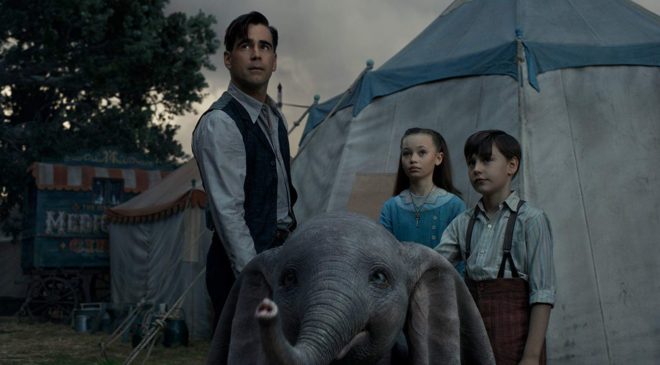 As for the title character himself? Dumbo is a marvel of modern CG animation, blending more or less seamlessly into the dusky-hued lighting choices Burton and cinematographer Ben Davis (Doctor Strange, Captain Marvel, Kick-Ass) make in bringing this children’s story into a darker, adult-oriented nightmare. In close-up, the elephant effects are marvellous, similar to the level of Jon Favreau’s Jungle Book instalment, but the effects do look a touch wonky in wide-shots, while an abundance of green-screen photography is apparent with the blending of disparate elements filmed out of sequence looking shockingly antiquated compared to other major motion pictures. Tim Burton’s look is positively “story book”, but the tone of the “book” is something you might imagine Stephen King would offer up. Blessedly, the creature effects salvage much of the film’s disappointment, and Dumbo gets to fly a lot in the movie (thank goodness), but between the clever digital artifice and well-drawn moments of heartbreaking sorrow (my kids both absolutely bawled when Dumbo’s mother went nuts and was taken away from her baby, which is as close as this film comes to touching the original animated feature) the drawn-out human drama renders Dumbo inert.

With several nods to the original film, including the famous Casey Jones opening number, an homage to the Pink Elephant’s Parade, and an ever-so-brief glimpse of a pair of entirely non-racial blackbirds, Tim Burton’s bulging remake is a breathtaking bore despite beautiful visuals, something that is said more often than not of this once great director’s work. In asking whether the film needed to be made at all (in my opinion, no, but there’s a financial side to this that Disney is going bukakke for right now), the decision to bloat out the story and shoehorn in a bunch of woefully inadequate characters to flesh out the overriding narrative of Dumbo learning he can fly without needing the crutch of a feather to do so was critical misstep on every conceivable creative level. As beautiful and occasionally haunting as Dumbo appears, it’s yet another soulless cash grab that sours your memory of the far, far superior animated version.