At the crest of 1989, the blitzkrieg marketing campaign for Warner Bros revamp of Batman, here helmed by Edward Scissorhands director Tim Burton, was inescapable. The Bat-symbol had become synonymous with camp KAPOW and ZAP from the 60’s television serial starring Adam West, so a concerted effort to distance this film from that was made, to large success. Burton’s Batman revolutionized comic book film-making. Where before had come glib, often campy and highly fantastical films – the Superman franchise, to name one – 1989’s Batman was dark, brooding, and utterly grounded in noir realism. Batman as a character had long been labelled “The Dark Knight”, without much emphasis on “Dark”, and yet here was a film that came with Burton’s penchant for moody atmospherics and Gothic settings, a villain that outshone the hero, and some set-pieces that became iconic throughout pop-culture (and still resonate today). Yes, Burton’s Batman was considered a marvel (pun intended) but how does it stack up today? 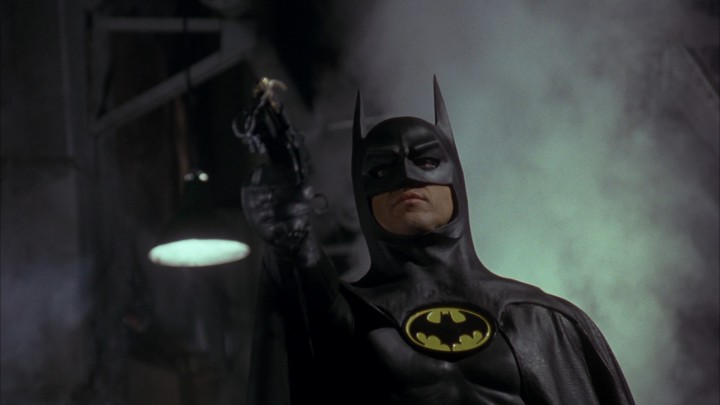 Billionaire orphan Bruce Wayne (Michael Keaton) spends his night skulking around Gotham City’s skyline as Batman, a masked vigilante fighting a war on crime and corruption. Although ostracized by the police (who are largely corrupt), Commissioner Gordon (Pat Hingle) sees in Batman a beacon of hope against the dark oppressiveness of cruelty that swamps the city. After a particular heist by local mafioso Carl Grisson (Jack Palance) goes wrong, gang leader Jack Napier (Jack Nicholson) plummets into a vat of acid, only to survive as a horribly scarred individual. Renaming himself The Joker, he begins to target the populace of Gotham with an airborne poison, in order to exact revenge against Batman. Meanwhile, newspaper reporter Knox (Robert Wuhl) and photojournalist Vicki Vale (Kim Basinger) attempt to follow the clues to unmask Batman and expose his identity. 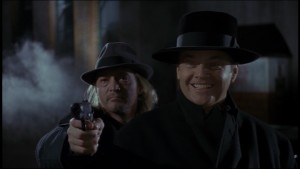 In it’s day, Batman was the very personification of a comic book movie done the right way. Considered by many to be the creative Bat-equal of Richard Donner’s original Superman, and enormously successful off the back of the dynamite scale of the production (not to mention Prince’s inexplicably terrible pop-song soundtrack), Batman remains a very very cool proposition on a big screen. Although some of its effects have sadly dated (the model work of Gotham, in particular, doesn’t quite hold up in this post-Lord Of The Rings world) and the sets are obviously soundstages, but it’s all part of the film’s Gothic charm.

Indeed, Burton was at his peak here (although the sequel, Batman Returns, would go even further in pushing the character’s envelope as to what an audience would accept) and the film is a splendidly gorgeous example of the cruel, sharp tone Burton would go on to use in many a film after. Angular shadows, silhouettes, smoke and contrasting light make Batman’s visual language an evocative one even if the story seems somewhat stop-start by today’s standards. Although credited to Sam Hamm and Warren Skaaren, apparently a number of hands went through this screenplay before Burton began filming, and in retrospect you get the sense that the film’s battle between wry humor and outright darkness is one fought behind a typewriter more than within the purview of Burton’s camera. 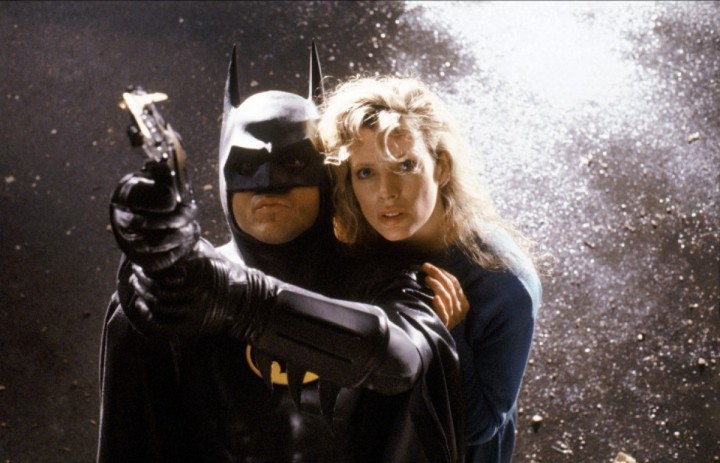 In a role that would echo through the decades and inspire Heath Ledger’s take on the character, Jack Nicholson’s portrayal of The Joker is easily one of his most iconic performances. Nicholson towers above this film, and Burton enables him to a considerable degree, almost making Batman a supporting role in his own film. That’s not to say this is a problem, because any time Nicholson is on the screen, the film reaches a dramatic brilliance that I doubt could have been achieved were he not in it at all. Nicholson’s snarling, leering, lisping performance is creepy as hell, and for its time became the defining portrayal of the character. Michael Keaton, cast as Batman, brought a sense of toughness and solidity to a role that never quite gelled like it should. This Batman isn’t the Dark Knight we know from Christopher Nolan’s trilogy, this is a more circumspect Batman, a more thoughtful version, with Bruce’s torment over his parents death actually seeming to give the hero second-thoughts whenever he has to decide between saving a villain or… well, you know.

Batman’s supporting cast are all well known faces; Kim Basinger plays Bruce Wayne’s love interest, Vicki Vale (although at the time this film came out, I wasn’t familiar with her in the comics), while Robert Wuhl does his best slapstick routine as the “bumbling” journo tasked with uncovering Batman’s identity. The inimitable Michael Gough plays Bruce’s butler, Alfred (and would do so through the four franchise films of the decade) while Jack Palance has a grasping, hissing time as the cruel Carl Grissom. Billy Dee Williams, most famous for his turn as Star Wars’ Lando Calrissian, has a small role as Harvey Dent (who would go on to become Two Face, later essayed by Tommy Lee Jones in Batman Forever, and Aaron Eckhart in The Dark Knight), while supermodel Jerry Hall (now former wife of Rolling Stones rocker Mick Jagger) has a bit part as a mistress of Napier’s who is burned as a trophy once the Joker is born. 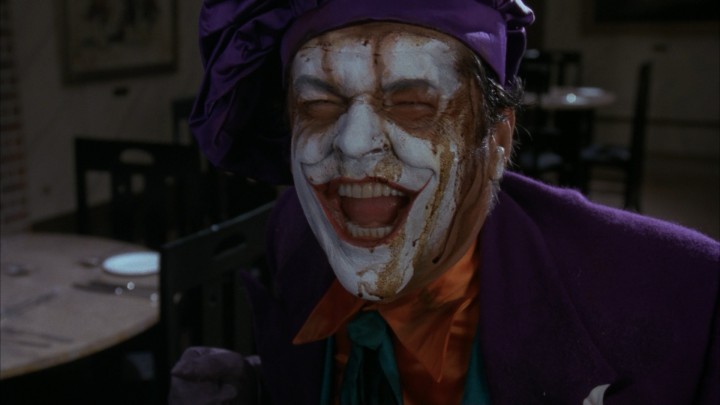 Batman lives and dies on its visual impact and quotable script. From the famous “I’m Batman!” to the creepy “Have you ever danced with the devil by the pale moonlight” reprise, Batman’s iconographic entry into pop culture was all but assured thanks to what would then be a fresh, darker take on the superhero mythos. Gone were the bright colors of Superman and his ilk, and in its place, perhaps accompanied by the late 80’s financial collapse around the world, a film filled with despair and darkness, but also hope. And that hope was what counted most.