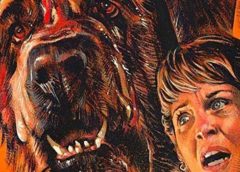 The early 1980’s were ripe for adaptations of the novels of Stephen King. From the success of Brian DePalma’s seminal 70’s horror flick Carrie, King’s novels have been on high rotation in the Hollywood machine ever since, and Cujo remains among the earliest and most divisive. Essentially a “woman terrorised with no escape” feature, in which Dee Wallace’s heroic maternal character becomes trapped inside her own car when the titular dog, a giant St Bernard, becomes rabid and starts attacking them, Cujo’s lethargic start and redacted King flourishes make way for a nail-biting climax of sweat and blood and an orgy of angry dog. Met with middling critical appraisal at the time of its release, Cujo’s status as one of the better King adaptations has only grown in the intervening years, although whether deserved or not remains to be seen. 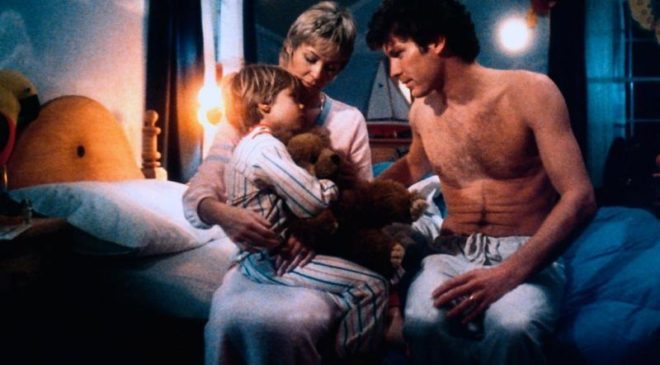 Donna Trenton (Dee Wallace) lives with her advertising executive husband Vic (Daniel Hugh-Kelly) and young son Tad (Danny Pintauro) in a small town in rural America. With Vic’s career spirally down after an ad campaign backfires, and Donna secretly having an affair with local furniture maker Steve Kemp (Christopher Stone), emotions are running high enough before Donna’s car needs repair – taking it to local hick mechanic Joe Camber (Ed Lauter), there they meet the owner’s St Bernard, Cujo, who unbeknown to all has been recently bitten by a rabid bat, and is about to turn into a maniacal killing machine. So when Donna and Tad find themselves trapped in the family’s car, under constant threat from the enormous canine, and no way to escape, the battle for survival begins. 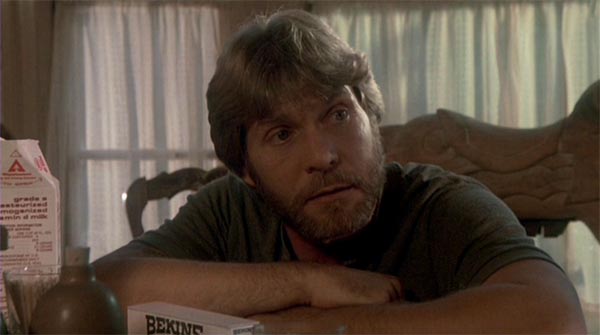 Part creature-feature, part “when animals attack” horror film, part turgid dramatic melodrama, Cujo suffers a great deal from turning Stephen King’s potboiler novel into a fairly silly The Birds clone, offering scant characterisation and a brevity of development before turning tables on the audience with a white-knuckle sequence involving Wallace and Pintauro trapped inside a boiling hot car for a third of the film. Whereas King’s detailed prose elicits empathy and emotional investment from the reader, this skill fails to translate across to the big screen with an inept screenplay (by Don Dunway and Lauren Currier) removing much of the original story’s chattering terror and turning it into a homogeneous monster movie of the week. 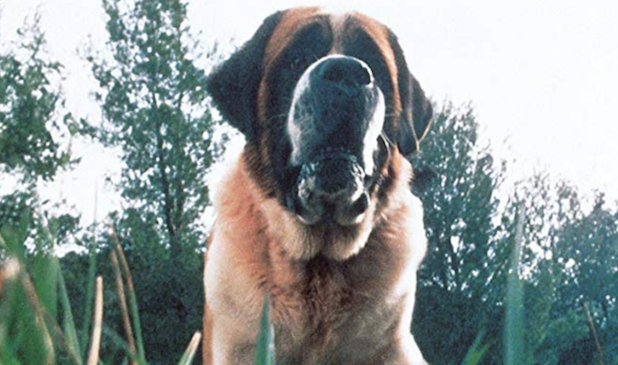 Dee Wallace is commendable as the flawed Donna, although exactly why her character has an affair isn’t explained in the film, nor is her soured relationship with Vic, so basically she’s a bit of a slag and we’re meant to root for her? Hah! King’s text had far more light-and-shade to the characters, evincing genuine humanity before sending the characters into their nightmare scenario, which is where any good horror film should work hardest at. Daniel Hugh-Kelly has very little to do other than look puzzled, angry and concerned in equal measure, while Christopher Stone has the thankless task of bringing resident homewrecker Kemp to life. He’s saddled with zero actual development and as such has zero impact on the film. The smattering of supporting actors, from Ed Lauter as the grizzled and abusive mechanic, Mills Watson as the thick-skulled alcoholic neighbour (and the first to be killed by Cujo), and Sandy Ward as Sheriff Bannerman, allow the rising fear to bubble along nicely under director Lewis Teague’s workmanlike efforts, as he attempts to generate tension early in the film. But the early going in the film is a slog, with disagreeable characters and insufficient development of our investment in them failing to elicit any kind of connection with the story. 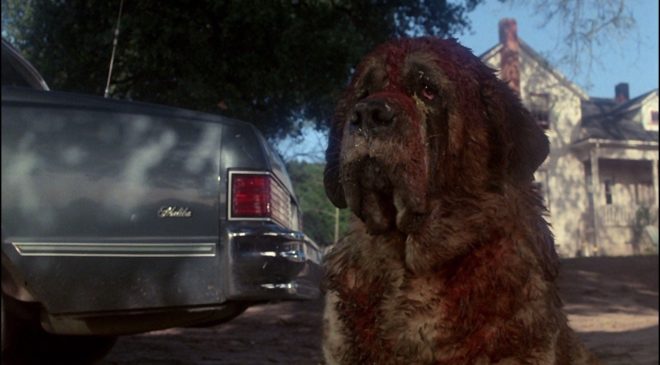 Threaded through the diffuse human narrative, the gradual descent of the titular beast, Cujo, into rabid insanity, is given pride of place within the film’s chapter-and-verse horror tropes. From Cujo’s encounter with cave-dwelling bats, to his eventual attacks on a gaggle of deserving humans, Cujo’s slow-build drive of impending doom is well crafted – about the best thing in the film, to be honest – and by the time we get to Dee Wallace and Danny Pintauro trapped in the family car, and the requisite screaming and attempting to escape/survive, the audience is well groomed for the dog’s sheer brute strength and aggressive behaviour. While today the film would have to contend with mobile phone coverage (I would imagine any modern reboot would have the mechanic live just out of cellphone range, a tried and true measure of maintaining a working business of any kind…) and the ubiquity of social media and instant messaging to prevail against the kind of plot mechanics Cujo throws up, there’s an anachronistic sweet spot to the film’s sense of isolation and danger that works in favour of the inherent terror. The dog itself becomes a bestial atrocity, transforming from gentle well-natured pet into a slobbering, growling, monolithic presence in the film’s final act, covered in mud and drool and, in the end, blood. The sense of presence Teague and cinematographer Jan de Bont (Speed, The Haunting) give the dog, and the unease within the bucolic rurality the plot requires, does work well enough, despite an overwhelming indifference to the audience at large. 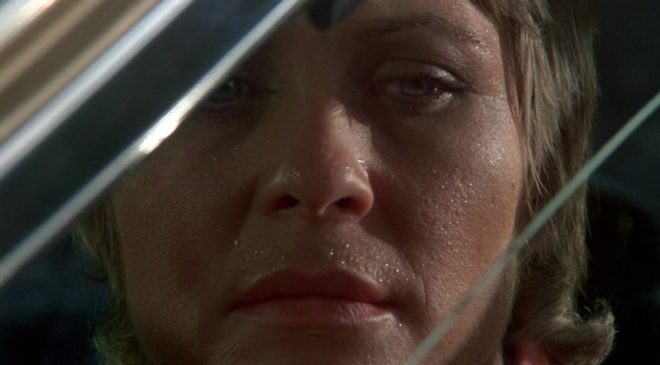 As all good horror films will work towards, the climactic sequence in which Dee Wallace has to survive against (for all intents and purposes) and unsurvivable threat comes to a head quite late in the movie. It’s a chess board of convenience and plot logic, ropey logistics playing a large part in getting the woman and the dog to confront each other. Teague’s direction of the famous dog attack sequences are really effective, and the performances of both Wallace and Pintauro are in these moments quite sublime – Pintauro himself does appear to be genuinely distressed before the camera, and whether actual or not the effectiveness ratchets up several degrees and adds a visceral gut-punch to what is an otherwise pedestrian man-vs-nature cliche – but not enough to counterbalance the fairly boring opening half. Two adults having an affair? A wife leaving her husband to go live with her sister against the wishes of an overbearing husband? A postman facilitating commercial espionage? Yikes! 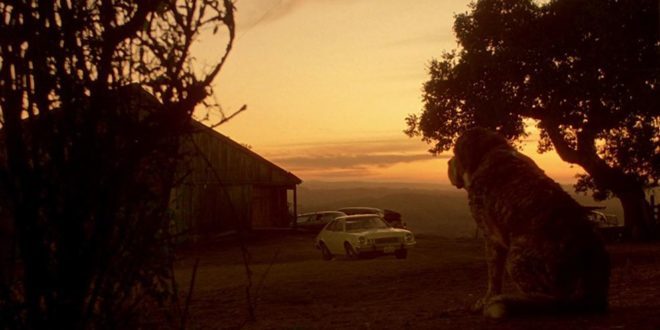 The film isn’t entirely clever enough with its striking premise to work as well as it should, despite some nice directorial flourishes from Teague, and the blood-soaked finale (and its abruptness of conclusion) feels manifestly overcooked compared to the story’s ineffective opening. I did have a bit of fun with the film after a while, and the gory parts do work just well enough to maintain interest as a genre piece, so in that I’d recommend Cujo for horror purists and advise everyone else to skip it for something else. King’s novel is a classic for a variety of reasons: I just wish those reasons had translated to the screen a bit better.