Warning: Minor spoilers may be present within. All images can be considered as spoilers.

Jordan Peele’s follow-up film to his breakout 2017 hit Get Out retains the director’s assured hand behind the camera, his razor-wire crispness of tension and an auteur’s abandon to simply go for broke: Us is pure nightmare fuel, a venture into the home-invasion terror and psychological torture of the utterly incomprehensible. Led by the always sublime Lupita Nyong’o (still the best thing in 12 Years A Slave, by a mile) and abetted by Black Panther star Winston Duke, as well as a solid cast of kids including Evan Alex and Shahadi Wright Joseph, Us presents a different kind of horror film to Get Out’s racially charged overtones and instead goes for a touch more gratuity and a whole load of nail-biting terror, although in keeping with a follow-up film finds a confusing climax undercutting a lot of Peele’s masterful setup and buildup. 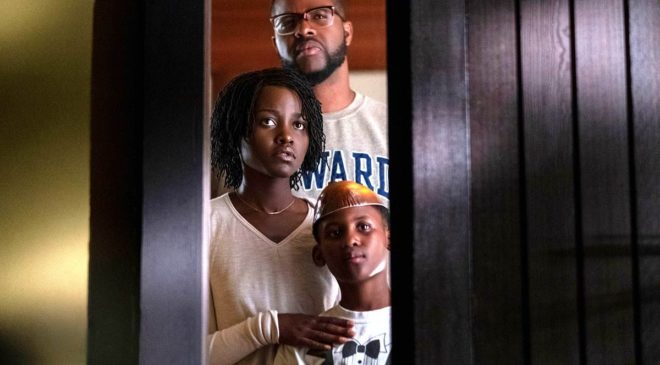 After a trauma suffered during childhood which left her rendered unable to speak, Adelaide Wilson (Nyong’o), together with husband Gabriel (Duke) and children Zora (Shahadi Wright Joseph) and Jason (Evan Alex) arrive at their Santa Cruz lakehouse for a holiday. Their friends and neighbours, Josh and Kitty Tyler (Tim Heidecker and Elisabeth Moss, respectively) are far wealthier but still accommodating. One evening, the Wilson family is terrified to find their home invaded by four doppelgangers, creepy, sadistic interlopers apparently hell-bent on killing the family; after a battle, Adelaide, Gabriel and the kids escape, only to find that their mirror images aren’t the only same-same beings introduced onto an unsuspecting world, and then all hell breaks loose. 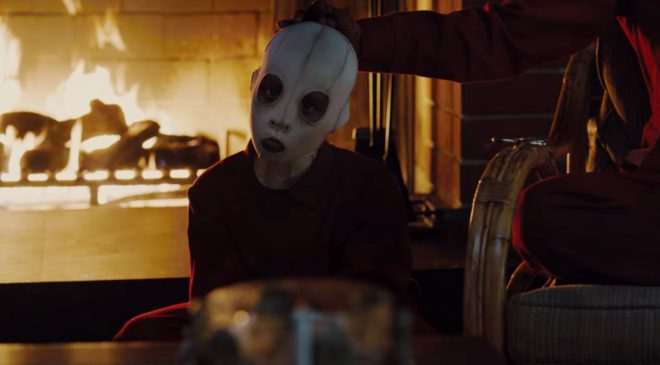 I’ve purposely avoided going into too much plot detail (more than usual, anyway) for the simple fact that if you’re going into Us without a shred of an idea what’s going to happen, it’s best to keep it that way. Jordan Peele taps into the unholiest of primal fears with Us, introducing  a collective known only as “the tethered”, terrifying doubles for our leading characters who inflict gruesome violence on those they encounter, and while Us isn’t marketed as a splatter film there’s a far amount of arterial spray on show here at times. Gruesome… perhaps realistic, I think. Great horror works centrally on the intellect: if you can stimulate the fear centres of a viewer’s brain and convince them they’re terrified of something – nay, anything – then the actuality of such fear plays out far stronger than even the most pornographic torture elements you could depict. 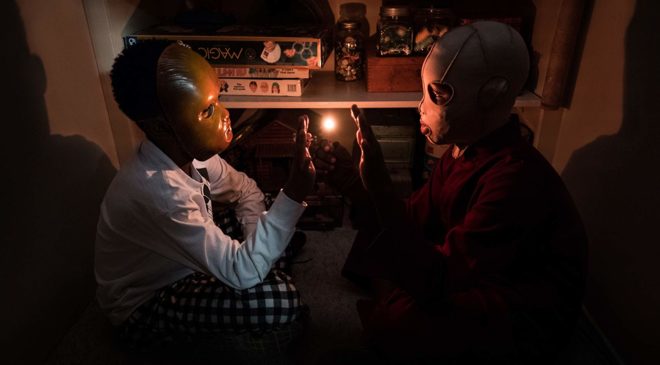 Peele recognises this and (at least in the opening act) plays on this strongly, giving the film a real gritty, urbane sense of normalcy fringing a most dire evil lurking just out of sight. His screenplay opens well, with a young Adelaide becoming lost at a beachside amusement park, keeping the audience unbalanced with who these people are and what their relationship to each other is, before doubling down on the opaque central quartet of characters we follow for the majority of the film. Adelaide, played convincingly and with obvious relish by Lupita Nyong’o, is a strong female role on the screen, although at no point does “feminism” become the central conceit of the movie. A black family terrorised in their home by four other black people might seem like it’s another Peele-racial subtext soapbox, but race, politics or religion play no part whatsoever in Us’ visceral thrills. The screenplay hedges its bets on an endgame twist (which mostly succeeds, but if you’ve seen enough horror films before you might well guess what’s happened reallllllly early on) and has a number of nice genre setpieces where mayhem, bloody murder and brutal human-on-human violence is wreaked, all delivered with a strong directorial presence echoing similar work done by the likes of Ari Aster’s Hereditary or Andy Muschietti’s IT. It’s high-octane horror indeed, and with uber-horror-producer Jason Blum’s name attached you can be sure there’s some decent talent thrown at it. 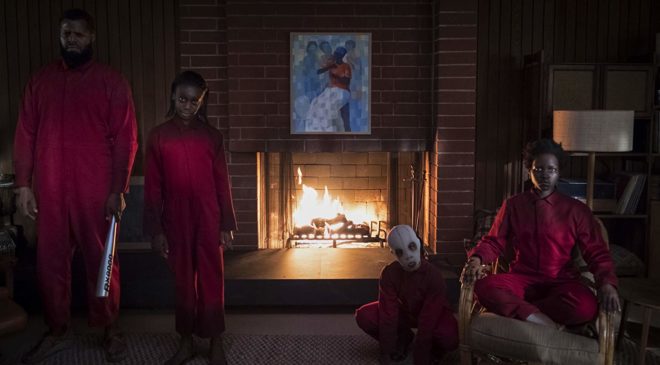 Us is a great balance between terrific performances – Nyong’o aside, all the cast here do well, including Winston Duke and Handmaid’s Tale star Elizabeth Moss, stepping out of the red habit and into a bloody red killzone – and story, the skin-prickling horror of slow realisation of the evil lurking in “tunnels beneath the United States”, alluded to in an eerie opening title card making for distinctly uncomfortable and effective viewing. Peele draws the hackles on your neck to rise through out-of-focus jump scares, tight musical cues and fabulous editing, enabled largely through dynamite camerawork that keeps your eye wandering the frame to catch the slightest details layered within. The film isn’t all terror and screaming, with a number of (relatively) light-hearted moments mixed in to release the tension from time to time, and I did catch myself chuckling here and there. Weaving the ubiquitous “family holiday” routine with an unabridged family assault that will have you gripping the armrest tightly, Peele has crafted yet another garrote-wire film of unhinged creepiness and a real sense of palpable believabilty. 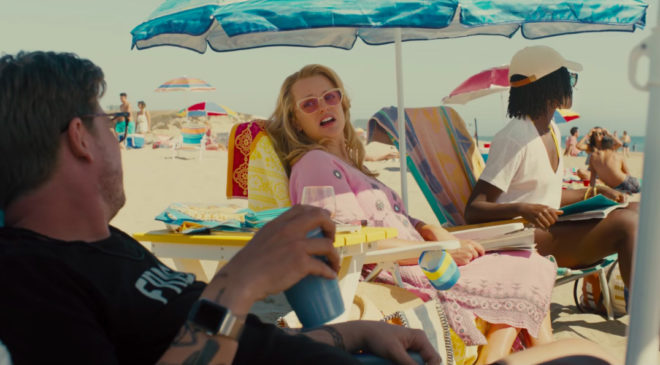 Us is a strong second film for Jordan Peele, solidifying his talent behind the camera (as if we couldn’t already work that out) and giving us yet another off-kilter ride into his sense of subgenre acuity. He knows how to play the audience like a fiddle, at least in terms of making us frightened, and whether it’s with subtle moments of dialogue or background action out-of-focus or with music blasting jump scares and a spider-like sense of rising menace, he is fast becoming the preeminent maestro we love to watch work. While the film staggers in it’s latter stages, Us is of a resolute high quality in that “it’s all a bit weird dystopian kinda way” way, and comes highly recommended. Just don’t look into any mirrors afterwards.