Nominated for three Oscars, including Best Picture, John Huston’s 1941 remake of The Maltese Falcon remains perhaps the definitive potboiler noir detective picture. With Humphrey Bogart making his mark as the indelibly hard-bitten Sam Spade, personifying the gritted-teeth archetype for whom both death and alcohol form a way of life, The Maltese Falcon is a white-hot murder-mystery drama held together by wonderful screen performances and an blistering screenplay (by the director), and remains the benchmark by which all other subgenre films are measured. I remember seeing this movie as a kid and finding it boring (mainly because I didn’t understand what the hell was going on) but reappraising it in my 40’s has proved to be a measurably treasured experience of discovery and revelation.

Following the murder of his partner by an unknown assailant whilst on a case, private detective Sam Spade (Bogart) becomes involved in the hunt for a mysterious bird-like statuette reputed to be worth a fortune, thanks to clues laid down by the secretive Ruth Wonderly (Mary Astor), the venal Joel Cairo (Peter Lorre) and the blustering Kasper Gutman (Sydney Greenstreet, in his film debut aged 62), all of whom seek the item for their own purposes. As he unravels the clues to the mystery of the Falcon’s location, Sam also utilises the services of his loyal secretary Effie (Lee Patrick), and brush off the intentions of his partner’s wife, Iva (Gladys George), whilst trying to avoid the gasp of the local police, led by Detective Tom Polhaus (Ward Bond).

The third cinematic version to hit screens, The Maltese Falcon was first published as a serialised story in Black Mask Magazine back in the late 1920’s and early 1930’s. Warner Bros delivered a film version in 1931 (directed by Roy Del Ruth, and starring Bebe Daniels and Ricardo Cortez), while a comedic version appeared in 1936 with the title Satan Met A Lady (which starred Bette Davis, who later disavowed the project), but it’s John Huston’s superb 1041 version which is best remembered and most iconic today. A year before he cemented his Hollywood status with Casablanca, leading man icon Humphrey Bogart personified the tough, leathery, kinda alcoholic private dick with his gruff, masculine take-no-shit attitude and his somewhat misogynistic view of women, a template that would become a part of cinematic folklore and a staple of the noir genre ever since. The character of Sam Spade would become a metonym for this kind of hard-bitten style of character, who suffered no fools and took no prisoners, the kind of flint-eyed sociopath it would take to be a great detective in the Big American City.

The story is a labyrinth of hidden motivation, subterfuge, red-herrings and plenty of twists and turns, delivered with a searing screenplay by the director, who would be nominated for an Oscar in the Adapted Screenplay category. Huston’s writing of all the characters is exemplary, utilising a large portion of the original text’s dialogue (pared back to accommodate the restrictive Hayes Code of the day) and fleshed out by some dynamite performances. Bogart – and this almost goes without saying – has never been better, his clenched-fist Sam Spade a malignant cancer of a character that hardly seems likeable, at least until Bogart turns him into a sympathetic anti-hero whose motivations, while not always pure, remain unblemished by the sordid characters he mixes with. Spade’s dialogue and verbal dancing with both Mary Astor’s mysterious Ruth Wonderly (or Brigid O’Shaughnessy, her real name) and Sydney Greenstreet’s debonair kingpin role of Kasper Gutman (a name that fits perfectly, to be honest) sparkles with the white-hot electricity of subtextual friction, and while a lot of the sexual elements within the story aren’t obvious (Hayes, you bastards!) they remain in glances and looks and a few lines of broadly coarse 1941 dialogue. The film’s MacGuffin, the titular statue of a falcon, is motivation indeed but becomes almost ancillary to the wonderful characterisations within, including the sublime work of the inestimable Peter Lorre (as a vaguely Spielbergian-villain character in Joel Cairo), and Elisha Cook Jr as one of Gutman’s henchmen, Wilmer Cook, who offer creepy and sinister support to the effective and evocative sprinkling of villainy to the movie. 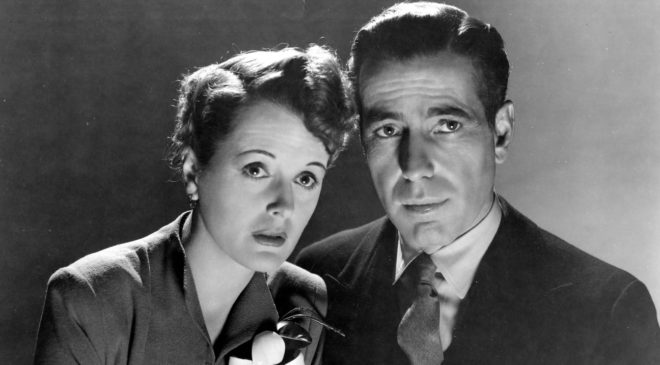 For me, however, it was the technical aspects of the film that appealed most vividly. Huston’s screenplay and the performances of the cast aside, the direction and production of the film was one I was most appreciative for it’s setting of the template for those to follow. The crisp black and white photography, the stark shadows and luxurious focus pulling, the dynamic camera angles and the brilliant editing make this a film fan’s feast for the senses. Huston uses the camera to enable the story to play out, his cutting and use of framing superb from beginning to end. You can visibly see how well he planned each shot, each sequence, each moment of the film, in order to really capture the audience in his thrall. It’s a precise movie, this one, with not a single hair or prop or actor or plot point out of place. Huston uses low angles to suggest menace, and high angles to engender intimidation, and he allows Arthur Edison’s wonderful photography to become the real highlight of the movie. I haven’t felt this way about a film since Citizen Kane and 12 Angry Men, both of which are the equal of this fascinating production in terms of using the visual medium to push the narrative, instead of simply sticking the camera wherever and letting the actors do all the work. The editing is also scintillating, Thomas Richards’ work in the cutting room a thing of beauty in elevating tension, deriving mystery, and offering some nice touches of humour to an otherwise melancholy mood piece. The film’s climactic dialogue sequence, in which the major players gather in a hotel room to discuss the arrival of the titular statuette, is a masterclass in timing and showmanship, the rise and fall of blame and bargaining as potent as you could ask for given there’s very little by way of actual “action” in the movie. 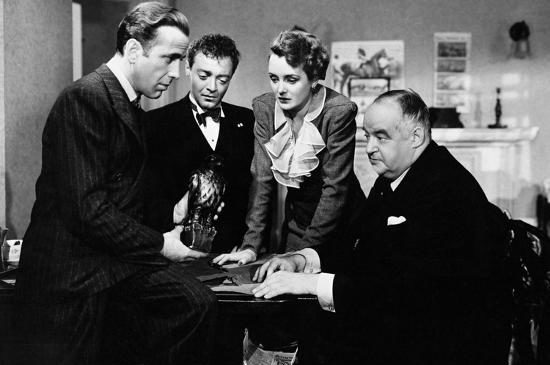 The Maltese Falcon is regarded today as a trailblazing example of the film noir genre, with Humphrey Bogart’s memorable utterances and indelible visage as Sam Spade becoming one with legend in an instant, and a template for the noir genre ever since. Defining a generation of Hollywood filmmakers, John Huston’s remarkable direction (it was his first feature film as director, having spent some time in the industry as a screenwriter) and the stark visual vernacular established within are immensely iconic, a powerful reminder of just how tinderbox-hot Hollywood could make films based entirely on dialogue and character. Sublime in almost every respect, and it’s hardly dated a day.